Shut the door: How world should respond to Trump's Jerusalem policy 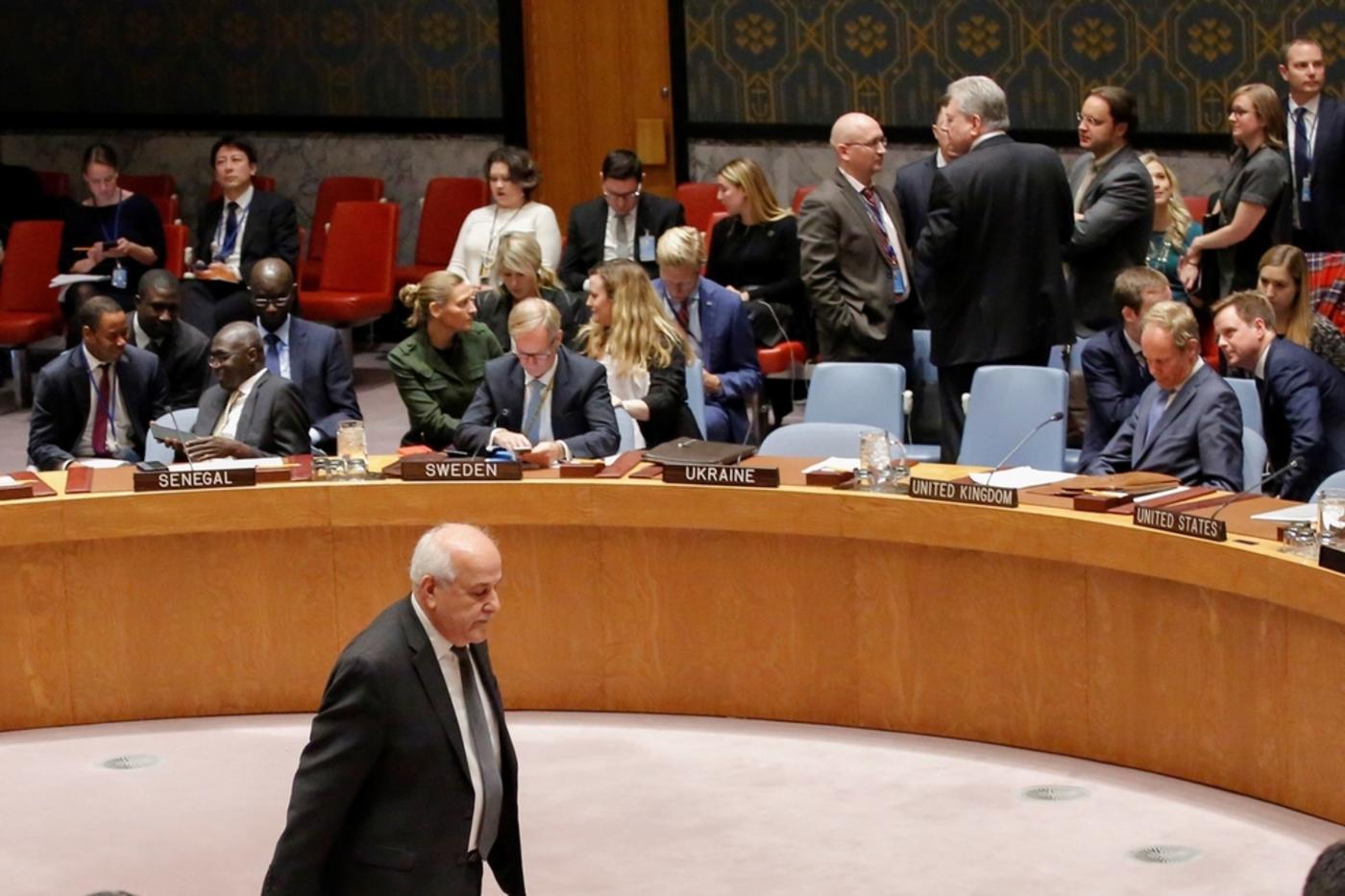 In a speech that was long on hyper-inflated rhetoric and short on policy prescriptions, US President Donald Trump outlined his national security vision earlier this week. Americans learned essentially that the Cold War had resumed with Russia and China and that the president would make America great again not just domestically, but abroad as well.

We also learned that American troops almost single-handedly destroyed Islamic State (IS), with a bit of assistance from our new "Sunni BFFs". Trump naturally took credit for rallying the troops to land a decisive final blow on religious extremism everywhere:

"Following my trip to the Middle East, the Gulf states and other Muslim-majority nations joined together to fight radical Islamist ideology and terrorist financing. We have dealt ISIS one devastating defeat after another. The coalition to defeat ISIS has now recaptured almost 100 percent of the land once held by these terrorists in Iraq and Syria. Great job. Great job. Really good. Thank you. Thank you. We have a great military. We're now chasing them wherever they flee, and we will not let them into the United States."

Apparently, Israel-Palestine is not a US national security threat as neither was named in the speech. "Islamist extremism" is the only threat that matters to the president, and - in his mind - it endangers America both at home and abroad.

After Trump recognised Jerusalem as Israel's capital, a shocked Arab and Muslim world began to organise a response. One of the first actions proposed was a UN Security Council resolution rejecting Trump's departure from six decades of US policy.

A plan took shape quickly. Egypt proposed such a resolution on Monday 18 December and the Security Council voted 14-0 that the US position was "null and void" and must be renounced immediately.

The resolution itself was a bit of theatre since all parties knew that the US would veto it. But they didn't realise how angry the American ambassador would be in her denunciation of the manoeuvre. Time Magazine wrote:

"US Ambassador Nikki Haley called the Security Council resolution 'an insult' that won't be forgotten, saying the United Nations forced the US to cast a veto simply because of its right to decide where to put its embassy. She said the veto - the first cast by the US in more than six years - was done 'in defence of American sovereignty and in defence of America’s role in the Middle East peace process.'"

Haley was certainly in high dudgeon, but her Security Council counterparts were not deterred. America's traditional allies, as well as Russia and China, recognised that the US position was totally isolated, reversed longstanding bipartisan US consensus, and that it also violated international law.

The resolution was also intended as a slap at Haley's contention that a legitimate peace process could recognise the claims of one side to the conflict (Israel) and ignore those of the other (Palestine).

After the US veto, the Palestinian ambassador announced the General Assembly would vote on the matter, where it would likely be supported overwhelmingly. Though the resolution would not have the same legally binding status it would have in the Security Council, the impact would be almost the same.

Ambassador Haley, continuing her vindictive ways, declared that the US would be "taking names" of those nations which defied it in the vote. She also implied her country would be looking to punish the UN itself if it didn't get its way.

This is a tactic used by Republican administrations for decades against an international body reviled by US isolationists.

It seemed clear, even before Trump's declaration about Jerusalem, that the peace plan being formulated by Trump's son-in-law, Jared Kushner, would face rough sledding. Media reports of the provisions of the plan indicated it did little more than ratify the status quo.

Such an outcome would be quite favourable to Israeli interests and anathema to Palestinians.

When the Saudi Crown Prince Mohammed bin Salman summoned Palestinian President Mahmoud Abbas to Riyadh last month to hear the proposal, the Palestinian leader was not enthusiastic, which caused the crown prince to warn him that if he could not support it he should resign.

The outcome of Monday's vote in the UN will strengthen Palestinian resolve to resist or reject the Kushner plan when it is unveiled - which, according to reports, should be sometime next month. That would render it dead in the water.

Should Trump's "ultimate deal" - as he called it during the campaign - fail, it would mean that one of the president's major foreign policy planks would be null and void. This would be added to his earlier failures to end Obamacare and enact a Muslim travel ban.

In my last op-ed here, I urged sovereign states to signal their displeasure with Trump's recognition of Jerusalem by declaring their intention to open embassies in East Jerusalem.

This would put Israel and the US on notice, that if they wish to pre-empt peace negotiations and declare the holy city as Israel's capital, that the rest of the world may declare it Palestine's capital. In other words, two can play at this game.

Now, Turkey has done just that. It has announced plans to open embassies to Palestine in East Jerusalem. Egypt urged Arab states to follow suit. All nations, not just Arab or Muslim, should join in this protest. It is one of the best ways to show resolve against Trump's blundering policy.

It is likely that Israel would do its utmost to frustrate these efforts. Since it controls the city, it would very likely succeed. But the very effort to open such embassies would put the issue on the international agenda.

Another suggestion would be to pressure the European Union and other major bodies to declare Israeli government representatives to be persona non-grata.

That would mean that trips abroad by Israeli Prime Minister Netanyahu or prominent cabinet members like Avigdor Lieberman would be met with a frosty "No", when requests were made to schedule meetings.

The best way to warn Israel that their rejectionist policies will be met with counter-rejection is to slam the door in their faces. It is an effective way to get their attention.

I would also suggest the same approach to Trump himself. His ambassador to the UK announced last month that the US leader planned a state visit to Britain in the new year. Later, after this trial balloon was met with resistance, the visit was delayed.

All EU governments should notify the US that visits by its diplomats or political leaders will be met with a cold shoulder. You come at your peril, and if you do you will hear an earful from us on Palestine.

In a related development US vice president announced he was cancelling his trip to the Middle East. Ostensibly, it was due to his being needed in the run-up to the Congressional tax reform vote.

But after Abbas told him he wasn't welcome in Ramallah and facing even Saudi opposition to the US declaration, Pence thought better of wading into the maelstrom. Facing crowds of angry protesters throughout the region didn't seem terribly attractive politically.

Photo: Riyad H. Mansour, Palestine's Ambassador to the United Nations (C), walks through the room before a vote on a draft resolution that would reject US President Donald Trump's decision to recognize Jerusalem as the capital of Israel during a UN Security Council meeting over the situation in the Middle East including Palestine on 18 December 2017, at UN Headquarters in New York ( AFP) 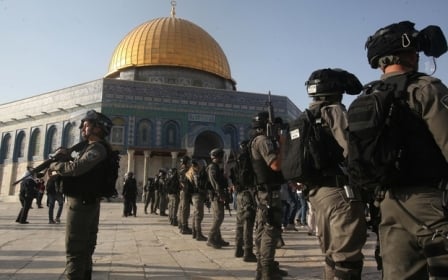