Things that go bump in the night in Riyadh

David Hearst
It is difficult to avoid the conclusion that Hariri's resignation, the Saudi purge, and the Houthi missile fired at Riyadh are interconnected 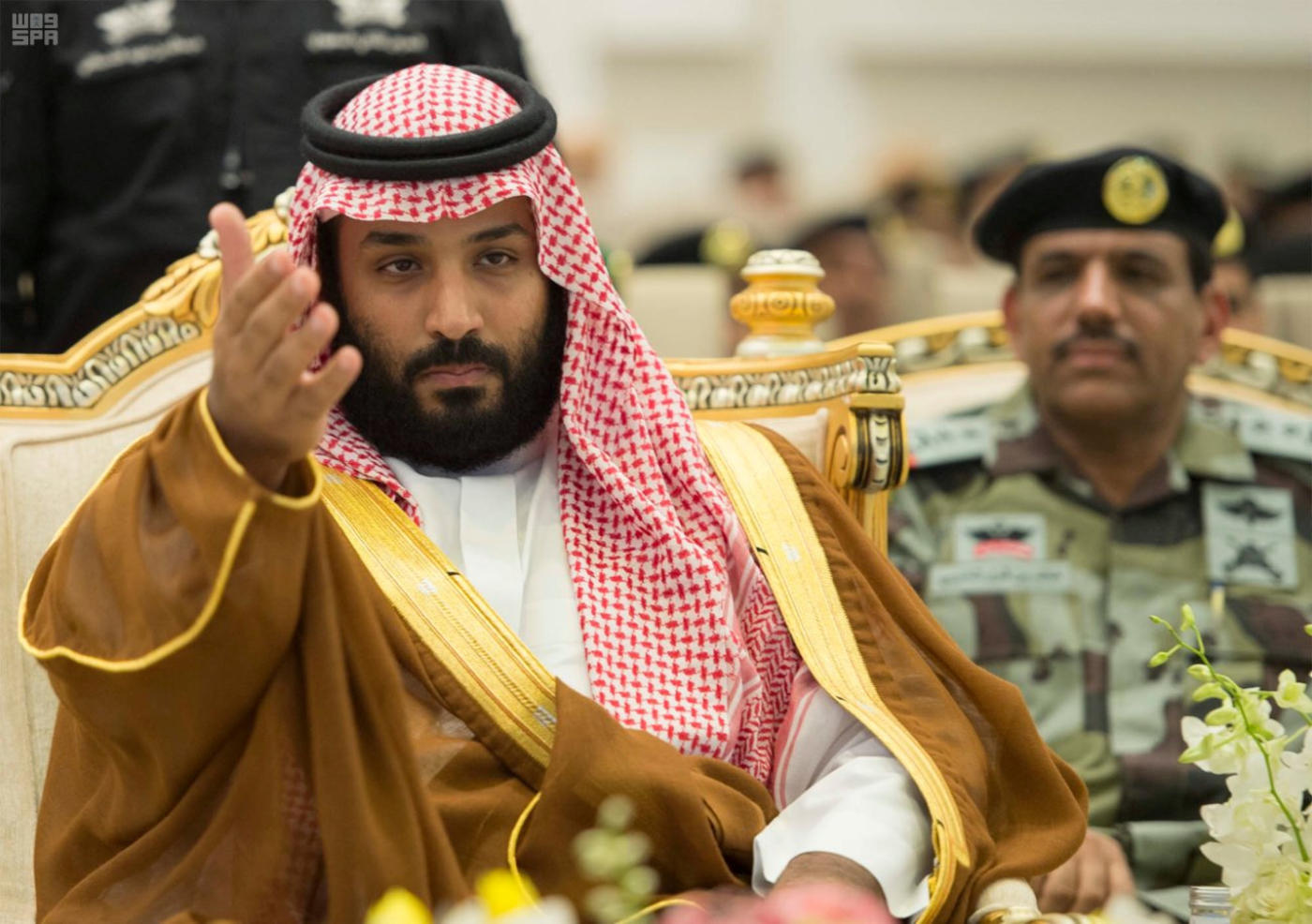 Saturday night was a busy one for Saudi Arabia’s Crown Prince Mohammed bin Salman. The kingdom’s 32-year old heir to the throne excelled himself. He surpassed the high levels of chaos and human misery he had already achieved as the defence minister who launched the air campaign on Yemen.

First up was the sudden resignation of the Lebanese Prime Minister Saad Hariri after just one year in office. Hariri made his announcement from Riyadh, which is a curious place to resign the premiership of Lebanon. His speech was hardline anti-Hezbollah and anti-Iran, setting a tone not heard from him in years.

A few days before he gave no indication that he was under the threat of assassination, as he claimed in his speech. He allowed airport workers to take selfies with him, and left Lebanon in a sunny and optimistic mood.

It is difficult to avoid the conclusion that when he left Lebanon, Hariri had no intention of resigning, that he himself did not know that he would resign and that this resignation had been forced on him by the Saudis

Hariri thought he had survived the pressure which had been applied last year on his construction company Saudi Oger, which was facing bankruptcy, and a meeting with Saudi Minister of State for Gulf Affairs Thamer al-Sabhan went well.

Al-Sabhan tweeted that the two agreed on "many things that are of interest”. But the minister’s tone changed rapidly after Hariri’s resignation. He then tweeted: "The hands of treachery and aggression must be amputated,” referring to Hezbollah and Iran.

The well informed but anonymous Saudi commentator, who uses the Twitter handle Mujtahidd, discounted the theory that Hariri felt under threat of assassination from Iran. He said the Lebanese premier was under greater physical threat from the Islamic State group.

“The main reason for summoning him back to Riyadh is to hold him captive with the rest of the detained princes and businessmen to blackmail him and force him to bring back the funds he has abroad, particularly those not linked to Lebanon.”

Hossein Sheikholeslam, senior advisor to the Iranian foreign minister, appeared to agree with Mujtahidd. He accused US President Donald Trump and the Saudi crown prince of pressurising Hariri into resigning: “Al-Hariri's resignation was done in coordination with Trump and Mohammed bin Salman to foment tension in Lebanon and the region," Sheikholeslam said.

Hassan Nasrallah, the leader of Hezbollah, reacted calmly to the news on Sunday. He placed the blame for Hariri’s removal on the Saudis, calling the resignation a violation of Lebanese sovereignty and an attack on “Hariri’s dignity”.  He referred to Hariri as “our prime minister,” not, note, our former prime minister.

Put all these statements together, and it is difficult to avoid the conclusion that when he left Lebanon, Hariri had no intention of resigning, that he himself did not know that he would resign and that this resignation had been forced on him by the Saudis. My information, however, is that he has not been arrested.

The second event was a bump in the night quite literally. It came just hours after Hariri’s bellicose speech.  A long range missile launched by Houthi rebels thousands of kilometres away in Yemen came down somewhere near Riyadh airport in the north of the capital. The missile was allegedly intercepted by Saudi air defence missiles, but there were reports of scenes of panic on the ground.

The third event to disturb the peace had been well planned. Prince Mutaib bin Abdullah’s demise had been widely predicted. He was in charge of the kingdom’s third military force, the national guard, and as Mohammed bin Salman had taken control of the ministry of defence and the ministry of interior (after ousting his cousin Mohammed bin Nayef). It was only a matter of time before he would take the scalp of Mutaib and put all three of the kingdom’s armies under his personal control.

The National Guard recruits historically from the kindgom's tribes. On Sunday the bank accounts of the tribal sheikhs involved in the army were frozen and prominent sheikhs have been banned from travel. They were mainly from the Motair and Otaiba tribes who had been loyal to the late King Abdullah. This was done to crack down on dissent.

We did not predict how brutally bin Salman would move against Mutaib. He and his brother Turki were arrested and charged with corruption. His arrest was signalled by websites close to the Royal Court, which printed initials and said the corruption was linked to military sales in his ministry. They created a special hashtag for the occasion which read: “Salman is confronting corruption”.

This committee is McCarthyite in its powers and scope. The first thing to note in the decree which set it up, is that it puts itself above and beyond the law

Al-Arabiya broke the news that first 10 and then 11 princes had been arrested, along with 38 top businessmen and former ministers.

In a style of government which is unique to the kingdom, the decision to carry out this purge appears to have preceded the announcement of the committee formed to make these arrests. This is how the young prince acts, a man who some Middle East experts persist in referring to as a Western-style reformer. He acts with total disregard to habeas corpus, due process and the rule of law. In his eyes, those arrested are guilty before they are proven guilty.

This committee is McCarthyite in its powers and scope. The first thing to note in the decree which set it up, is that it puts itself above and beyond the law. The decree states that the committee (which bin Salman chairs) is “exempt from laws, regulations, instructions, orders and decisions while the committee shall perform the following tasks ... the investigation issuance of arrest warrants, travel ban, disclosure and freezing of accounts and portfolios, tracking of funds, assets, and preventing their remittance or transfer by persons and entities whoever they might be. The committee has the right to take any precautionary measures it sees, until they are referred to the investigating authorities or judicial bodies.”

In other words, the prince can do anything he likes to anyone, seizing their assets in and outside the kingdom. Let’s just remind ourselves of what he now controls. The prince heads all three of Saudi Arabia’s armies; he heads Aramco, the world’s biggest oil company; he heads the committee in charge of all economic affairs which is just about to launch the biggest privatisation the kingdom has seen; and he now controls all of Saudi’s media chains.

This was apparent from the list of businessmen arrested. ART, MBC and Rotana Media group dominate the Arab media. These Saudi media corporations account for most of what is put out on air in the Middle East, apart from the news output of Qatari-owned Al Jazeera.

Their respective owners, Saleh Kamel, Walid al-Ibrahim and Prince Waleed bin Talal are behind bars. Presumably too their wealth has been confiscated. Forbes prices bin Talal, chairman of the Kingdom Holding Corporation, at $18bn. He owns sizeable shares in numerous companies, including Newscorp, Citigroup, 21st Century Fox and Twitter. These shares too are under new management. The head of STC, the biggest mobile operator in Saudi, was also arrested.

Quite apart from the political dangers of stripping so many very rich Saudis of their wealth, this is a bizarre way to encourage foreigners to invest in the kingdom. BIn Salman’s actions on Saturday seemed to be designed to scare them all off.

The economy is in recession and foreign reserves are being depleted. Bin Salman has just seized the assets of the kingdom’s biggest businessmen and set up a committee that can seize assets at will at home or abroad. What would stop him doing the same to the assets of foreign investors who fell out with him?

The purge of other top oligarchs like Bakr bin Laden, who headed the top construction company in the country, will also have a knock-on effect in the rest of the economy. The bin Laden group employs thousands of sub-contractors. Purges and business do not mix, as bin Salman will soon find out.

I am told by a reliable source that Prince Waleed bin Talal refused to invest in Neom, the mega city bin Salman announced would be built, and that was the reason why the crown prince removed his cousin. But bin Talal had also clashed with his cousin by calling openly for bin Nayef’s release from house arrest.

All branches of the royal family have been affected by this purge, and others that preceded it

The other point to note is that all branches of the royal family have been affected by this purge, and others that preceded it. Just look at the names of the princes who have been taken out  - bin Talal, bin Fahd, bin Nayef, bin Muqrin. The latter died in a plane crash, apparently trying to flee the country. These names tell you one thing - the cracks in the royal family go far and deep and extend to its very core.

Would all this have happened without another green light from Trump? He tweeted yesterday that he "would very much appreciate Saudi Arabia doing their IPO of Aramco with the New York Stock Exchange, important to the United States!” Trump also called King Salman, congratulating him for everything he did since coming to power. The moves follow Jared Kushner’s third visit to the kingdom this year.

If it was not apparent to one and all, it surely must be now. The capital of insecurity in the Middle East is Riyadh, and moves by a 32-year old prince to acquire absolute power are capable of destabilising neighbouring countries and removing their prime ministers. Worse, this prince appears to be encouraged by a US president who does not know what he is doing.

Wiser heads in Washington DC, like the Secretary of State Rex Tillerson or the Defence Secretary James Mattis must be tearing their hair out - or what is left of it. It would not surprise me to learn that Tillerson has had enough of trying to put out the fires that his president and his immediate entourage keep on igniting.

Photo: Saudi Crown Prince Mohammed bin Salman now has all three of the kingdom’s armies under his personal control (Reuters)