Trump logic: Turn one nuclear crisis into two by killing the Iran deal

Maysam Behravesh
If Washington decides to decertify Iran's compliance on the 2015 deal, then the world could soon face a second nuclear crisis 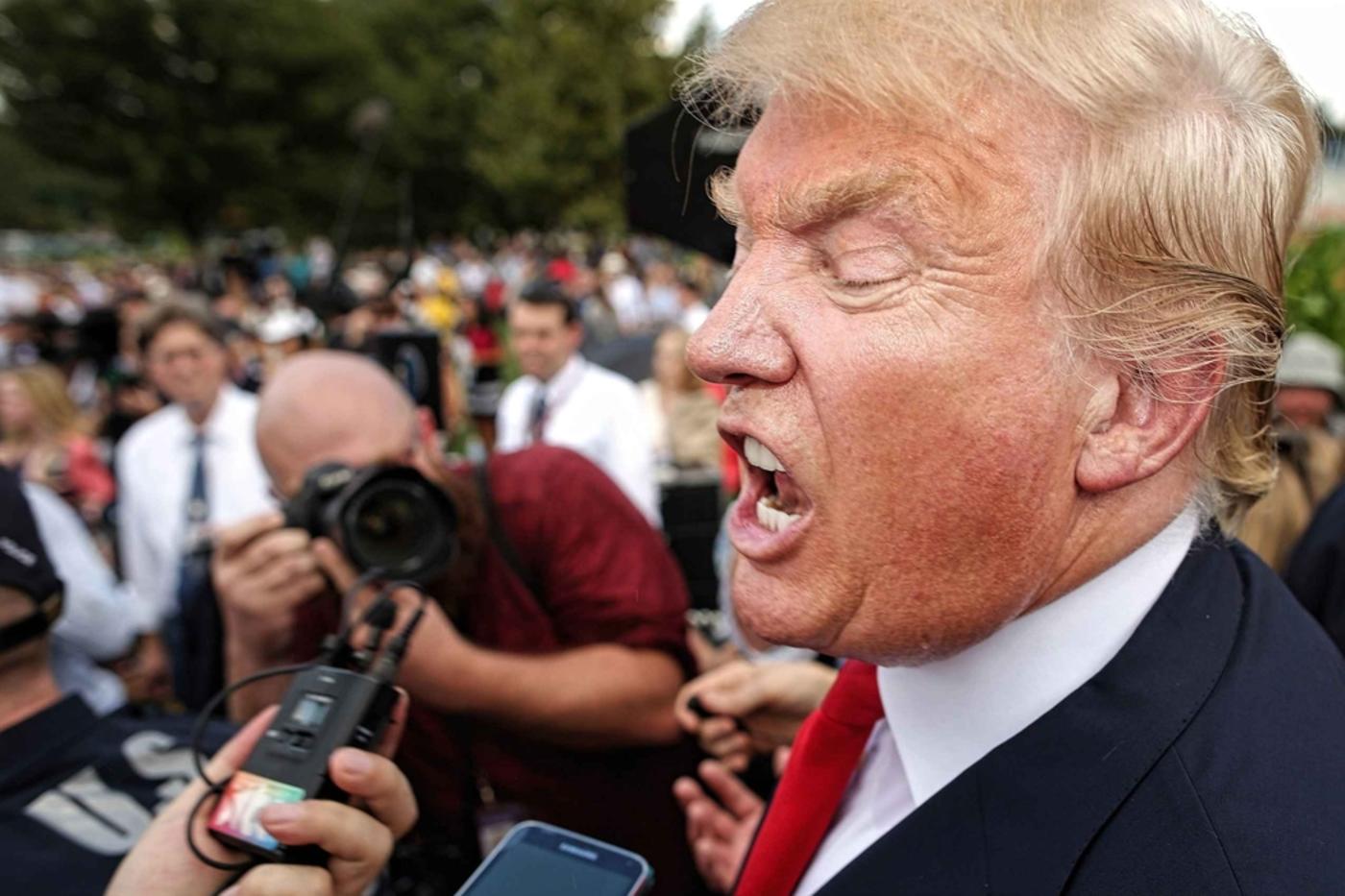 During his first address to the United Nations General Assembly this month, US President Donald Trump took the opportunity to lash out at two countries in particular.

He described North Korea – or the Democratic People’s Republic of Korea (DPRK) as Pyongyang calls itself – as a “depraved” regime with a “twisted” mentality that consists of a “band of criminals” equipped with “nuclear weapons and ballistic missiles”. Trump then threatened to “totally destroy” the country if the US was forced into a corner.

In similar vein, he labelled Iran a “corrupt dictatorship” and pronounced the Iran nuclear deal - known as the Joint Comprehensive Plan of Action (JCPOA) and concluded between Tehran and world powers in July 2015 – as “one of the worst and most one-sided transactions the United States has ever entered into”.

Obviously, for the US administration, there is a close link between these two challenges - will the North Korean nuclear crisis have serious policy implications for Washington’s attitude towards JCPOA?

Most proponents of the Iran nuclear deal, including former Obama administration officials, attribute the North Korean crisis to a lack of effective diplomacy and meaningful negotiations which helped the Iran deal materialise in the first place.

For these policymakers and analysts, the escalation of tensions on the Korean peninsula is further proof that the JCPOA should not only be maintained, but should also be used as a model to defuse the spiralling nuclear crisis in Southeast Asia. Joe Cirincione is president of the Ploughshares Fund, an American organisation advocating the reduction and dismantlement of nuclear weapons. “We have already made the same mistake with North Korea that we did with Iran," he argues, "by refusing to close a deal when we could have eliminated any nuclear capability, and then coming back to negotiations too late, when the country already has piled up nuclear chips they will not give up."

Yet, he insists, “as difficult as talks with North Korea have proven and will be again, there is no viable alternative”.

Similarly, in the words of Ben Rhodes, a national security adviser to Obama, “Trump pulling out of the Iran deal would create a second nuclear crisis while alienating the same countries we need to address the [North Korean] crisis”.

Most significantly, German Chancellor Angela Merkel - whose government is a party to JCPOA - has called for an Iran-styled diplomatic initiative to resolve the crisis in the Korean Peninsula.

“I could imagine such a format being used to end the North Korea conflict. Europe and especially Germany should be prepared to play a very active part in that,” she told Frankfurter Allgemeine Sonntagszeitung in an interview on 10 September.

But opponents of JCPOA - who consist mostly of Iran hawks in the US government as well as conservative American think tanks - see the Korean situation in a different light.

For them, it offers a mirror of where Iran’s nuclear activities can lead in a short time frame if the Islamic Republic, as a “rogue” regime, is not confronted and the “flawed” Iran deal not fixed.

These anti-JCPOA politicians and policy wonks believe that Pyongyang took advantage of the 1994 “Agreed Framework” with the Clinton administration but then jettisoned the accord and dashed for the bomb, which was tested for the first time in 2006. Now they fear that Tehran, too, is intent on following a similar duplicitous route to attain atomic weapons.

In congressional testimony on 5 April 2017, Mark Dubowitz, head of the conservative Foundation for Defense of Democracies, described JCPOA as the Islamic Republic’s “patient pathway to nuclear weapons” and added: “At the heart of the JCPOA is a fatal flaw: Iran does not need to cheat to reach threshold nuclear weapons capabilities.

“By following the deal, and waiting patiently for key constraints to disappear, Tehran can emerge as a threshold nuclear power with an industrial-size enrichment programme, near-zero breakout time, an easier clandestine sneak-out pathway, [and] an advanced long-range ballistic missile programme.”

US Ambassador to the UN Nikki Haley has recently made a similar argument. In a key speech at conservative think tank the American Enterprise Institute on 5 September, she linked both cases, asserting that “missile technology cannot be separated from the pursuit of a nuclear weapon. If we continue to not look at the Iranian activity, we will be dealing with the next North Korea”.

If we continue to not look at the Iranian activity, we will be dealing with the next North Korea

- Nikki Haley, US Ambassador to the UN

She added later in the same address that “Iran’s leaders want to use the nuclear deal to hold the world hostage to its bad behaviour”.

John Bolton, a US ambassador to the UN during the George W Bush administration, has raised the stakes even higher and sounded the alarm on “joint Iranian-North Korea nuclear and ballistic-missile programmes. Much of the current JCPOA debate would be strategically irrelevant if, as seems virtually certain, the ayatollahs can send a wire transfer to Kim Jung-un to purchase whatever capability North Korea develops,” he said.

Along these lines, Bolton has proposed a much publicised “strategy” for the Trump administration to exit the Iran deal, a formula that was recently countenanced by 45 former US security officials in a public letter to President Donald Trump.

Trump is deeply dissatisfied with the Iran nuclear accord, which he called the “worst deal ever” and an “embarrassment” to the United States. Therefore he will probably side with the second chorus when it comes to making a decision as to whether to stick with JCPOA or scrap it.

Shortly after Tehran published footage of a missile test on 23 September in response to renewed US pressure, Trump tweeted that “Iran just test-fired a ballistic missile capable of reaching Israel. They are also working with North Korea. Not much of an agreement we have!."

In fact, the footage was of an earlier failed missile test in January, as was later confirmed by Israeli security officials. There was no missile test.

Fake news aside, it does not seem Trump will abandon JCPOA all at once. The US president is required by law to report to Congress every 90 days as to whether Tehran is in compliance with the deal or not. Trump has affirmed, albeit reluctantly, that the Islamic Republic has abided by the deal twice so far.

But the next deadline is on 15 October - and it's then he will probably decertify Tehran’s adherence to JCPOA and thus leave the next steps to Congress.

The Republican-dominated body has shown an exceptional eagerness to levy sanctions against the Islamic Republic for its missile programme and support for militant groups in the region. It may see the decertification as a golden opportunity to reimpose nuclear-related sanctions on Tehran.

This will open a Pandora’s box, so to speak, and be the end of the Iran nuclear deal, particularly if Europeans finally give in to US pressure and try to “fix or nix” the accord, as Israeli Prime Minister Benjamin Netanyahu put it, despite their current rhetoric to the contrary.

Tehran will likely respond with escalation, given the effect of such a policy and previous decisions of the leadership in similar circumstances, which may include the resumption of sensitive nuclear activities prohibited under the deal.

Bottom line: Washington, while grappling with the North Korean nuclear challenge, should brace itself for another rapidly spiralling crisis in the Middle East, potentially culminating in a military confrontation, if it messes with the Iran deal.

Photo: Then-Republican presidential candidate Donald Trump talks with journalists during a rally against the Iran nuclear deal on the West Lawn of the US Capitol  in Washington on 9 September (AFP). Economy
ANALYSIS: Iran nuclear deal may be dead within weeks