Tunisians don't need the British government to teach them about resilience 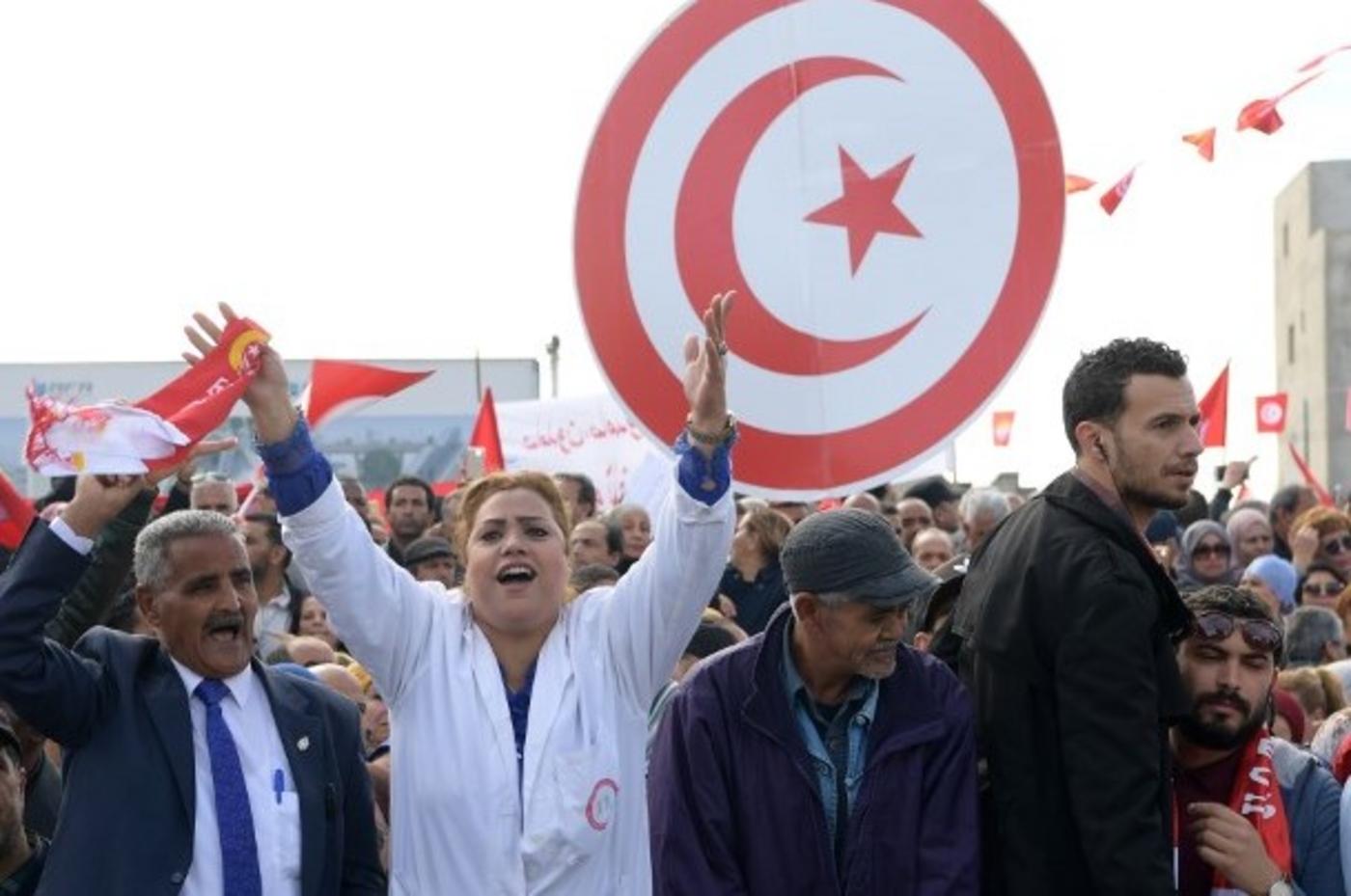 On Wednesday, Middle East Eye reported that a secretive British government counter-terrorism propaganda unit has been working on youth-targeted campaigns in the Middle East and North Africa. The British Council-led work has been rolled out in Tunisia, Morocco and Lebanon and has focused on cultural and artistic platforms to "deliver messages about alternative pathways to vulnerable youth".

The programme, called Strengthening Resilience in MENA, works with the national governments of each country in the hope of recruiting local civil society groups and organisations into the project in order to supposedly steer young people away from radicalisation and possible recruitment into terrorist groups.

There are many alarming aspects of this work. Firstly, the Research, Communications and Information Unit (RICU), which forms part of the Home Office’s Office for Security and Counter-Terrorism (OSCT), is also involved, though seemingly behind the scenes.

In the UK, this has been a heavily criticised unit which has targeted grassroots organisations – some of which include Muslim women's groups – in order to deliver Home Office-funded propaganda in relation to counter-terrorism, by attempting to shape Muslim identity in Britain.

Despite mounting criticism at home, the British government continues to export problematic projects like this, not only to other European countries but also to Muslim majority ones

This was pursued despite opposition from large sections of the Muslim community to the government’s Prevent strategy, and the deeply racist and repressive tendencies of these so-called counter-terrorism policies.

What made matters more insidious is that some groups were not directly informed of RICU’s role and funding, a familiar practice that was also used following Prevent’s inception, when grassroots community spaces were approached and resourced without being given full disclosure on the nature of the funding received.

Yet, despite mounting criticism at home, the British government continues to export problematic projects like this, not only to other European countries but also to Muslim majority ones.

One of the campaigns, developed through the programme, was a social media celebration of Tunisian identity (Ala Khatrek Tounsi – Because You Are Tunisian). Advertisements were played on television depicting a positive image of the country, as well as videos, posts and photos being shared across social media platforms evoking pride in national and cultural identity.

This took place during Ramadan 2016 and 2017, a time of increased TV and online platforms viewership given the lengthy and hot fasting days, when working and school hours are often made shorter in the region throughout the holy month.

Similar to the concept of controlling the sense of belonging and identification with the state, which the Home Office attempted in the UK, this tactic has been applied in a region where young people have grown up in the aftermath of a revolutionary uprising that demanded an end to poverty and state repression.

Yet these campaigns are not engaging with the social issues that continue to plague Tunisian society, despite the fall of former Tunisian president Ben Ali’s autocratic rule, such as the ongoing repression of political and journalistic freedoms – intensified under the state of emergency that has been in place since 2015 – or the lack of jobs and prospects for young people.

These campaigns are not engaging with the social issues that continue to plague Tunisian society, despite the fall of Ben Ali’s autocratic rule

There are many cases of arbitrary arrests, police brutality, torture and even extrajudicial killings of protesters, which are often denied by the government.

Just last month a 30-year-old English studies graduate, Mouna Guebla, detonated a handmade explosive in a suicide attack in Tunis. She was unable to find a job for years after completing her degree. This was effectively brushed off as an "isolated act".

Little attention was given to her social position, potential hopelessness as a consequence of studying for years in a field that she was unable to find work in, and the fact that she had no history of criminal activity.

This week, thousand of Tunisians took to the streets to protest and strike alongside 650,000 public sector workers over rising inflation, public sector cuts, and a failure to increase wages. There were walkouts across universities, schools, hospitals and ministries, chanting in demand of their rights.

Yet, the Strengthening Resilience in MENA programme continues working alongside governments in the region, including Tunisia, and seeks to support their strategic communications campaigns. One has to then wonder: who is to build resilience and against whom?

Some of the biggest social issues for young people across Tunisia, Morocco and Lebanon include poverty, unemployment, political repression, government corruption, access to good education and healthcare, and police brutality. Working alongside these states – renowned for violating people’s right to protest, not adequately tackling poverty and joblessness, divesting from welfare services, as well as relying heavily on aid – surely contradicts the intention to tackle the roots of isolation, marginalisation and even violent extremism.

In this sense, the programme appears more like an active campaign to strengthen identification with the state and undermine feelings of social revolt and resistance.

"RICU has been involved in secret programmes to promote versions of Islam that are depoliticised and attempt to ignore the root causes of political violence - foreign and domestic policies. These programmes exist specifically to reinforce ideas that ideology are at the centre of violence, rather than dealing with the structural violence they perpetuate. If RICU was serious about ending political violence, they would turn their attention to the way that regimes quell dissent, not only abroad, but in the UK as well."
The British Council’s own assessment report states that working in partnership with RICU, they have,"succeeded in creating a platform where government and civil society can communicate more effectively to strengthen resilience and reduce radicalisation and recruitment by violent extremists in the three target countries of Tunisia, Lebanon and Morocco”.

In order for that to happen, there probably needs to be a major probe into the stifling of freedom of speech and the violence towards political activists, trade unionists and various figures from oppressed minority groups in these countries. Effective communication would become a reality when the threat to a person’s life and liberty for criticism of the state are an unlikely outcome of these exchanges.

Hip Hop culture (i.e. rap and graffiti) has been a key component in the "Strengthening Resilience" work. What has historically served as an artform which speaks to young people from oppressed groups about social consciousness, political frustrations and state violence, has been co-opted to serve as a means of "strategic communications" by repressive states. This can be likened to the way the CIA used American abstract expressionism as a weapon during the Cold War.

Works by Jackson Pollock, Robert Motherwell, Willem de Kooning and Mark Rothko were toured internationally in order to promote the "freedom" of the US in contrast to Russian, communist repression of self-expression.

Adopting methods of propaganda that can be traced back to the Cold War, during which the UK and US funded different forms of cultural expressions – from Pollock to Jazz – to dissuade support for communism, doesn’t exactly point to the project as being about overall social good.

There is – overall – a striking level of colonial arrogance involved in the idea that a people who have participated in the largest revolutionary uprising in recent times need the British state to teach them about civil society, communication, or reducing violence. This is to say nothing of the irony of focusing on potential, isolated, individual violence while ignoring – or even legitimising – organised structural state repression.

In truth, it is us – the people of the global North – who should be learning from the people of Tunisia and the region about how to face down increasingly repressive states, curtailment of our free speech, and growing poverty. The revolutionary waves that shook the MENA region in 2011 emerged out of specific local contexts, and yet they also spoke to a broader global truth.

The rich have been getting richer on the back of the great majority for decades, and are increasingly turning to violence, repression and racism to keep their system going. Only mass, sustained and collective resistance will stop them. The people of Tunisia have shown the way.

Photo:Tunisian protesters chant slogans during a civil servants general strike after the failure of negotiations with the government on salary increases in the capital Tunis on 22 November, 2018 (AFP).