Jonathan Cook
Labour leader needs to win back the Red Wall, but he is avoiding the very issues they care about 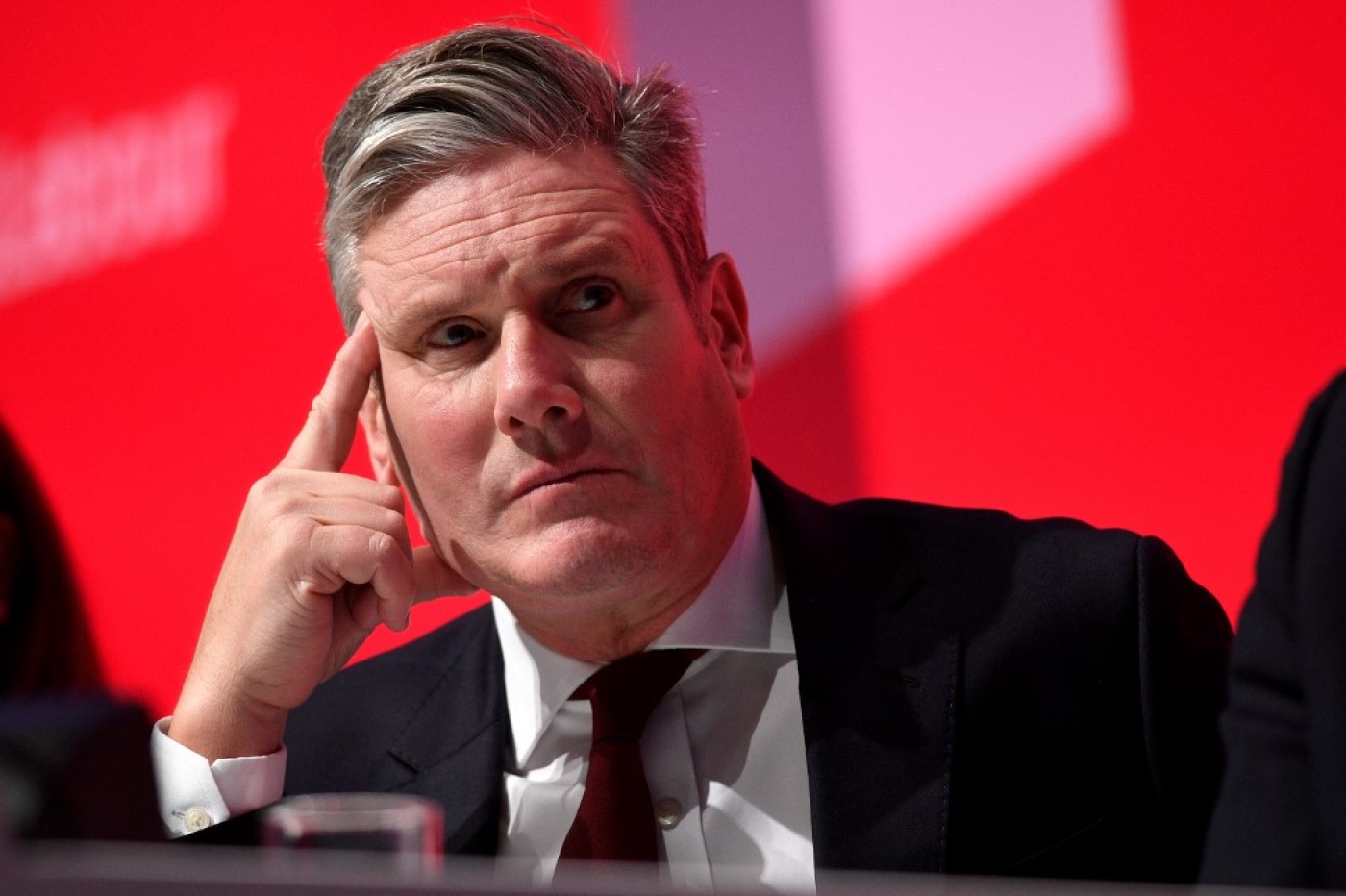 If there was one message Keir Starmer wished to underscore as he addressed Labour’s annual party conference last week, it was this: Labour was now incontrovertibly “the party of the centre ground”.

The British media’s raptures over a reinvented, supposedly more grown-up party - one ready for government, now that the Labour leader had buried the ghost of Jeremy Corbyn and purged the party of his wayward supporters - hid a far simpler story. Resolutely occupying the centre ground is Starmer’s only vision. It is his only proposed path to power.

Starmer was quick to manage expectations. In his speech, he warned that Labour would not be able to “fix everything”, and that the state of public finances “means this time the rescue will be harder than ever”. He emphasised the need to “act responsibly”. But Labour, he vowed, would once again be “the political wing of the British people”.

The media have settled on a reassuring explanation for Starmer’s unyielding “caution” and “moderation”. From the right-wing red-tops and state broadcaster the BBC, to the supposedly left-liberal Guardian newspaper, the narrative is the same: the Labour leader has been forced to rebrand the party to pander to the more conservative instincts of the party’s voters in its traditional heartlands.

It was in the so-called Red Wall constituencies that Labour faced a drubbing in the 2019 general election. With Brexit dominating the campaign, working-class Labour voters deserted in droves to the Conservative Party, attracted by its message that Britain could be made great again - that it could “take back control” - by leaving Europe.

It was supposedly the need to win back these voters that spurred Starmer to insist on the conference opening for the first time with a rousing rendition of the national anthem to celebrate King Charles III’s newly asserted right “long to reign over us”. But the nationalistic symbols now being desperately flaunted are there precisely to conceal the lack of policy, ambition and vision in Starmer’s Labour Party.

The best that analysts could manage was to big up Starmer’s pledge to create a publicly owned energy company, called, naturally enough, Great British Energy. But Labour was careful to emphasise that this initiative had nothing to do with nationalising the energy sector. 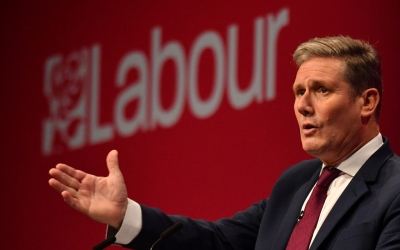 Keir Starmer is finally ahead in the polls – but at what cost?
Read More »

Predictably, Starmer’s officials have been vague about exactly what the public can expect from Great British Energy - assuming, that is, that the Labour leader holds good on his pledge. But in truth, this energy venture looks suspiciously like yet another iteration of the public-private partnership model so beloved of Starmer’s Blairite advisers.

Public money, it seems, will be invested in funding the development of expensive green technologies to take the risk out of renewables for private companies. Starmer’s message was that the scheme would be good for business and bring profits back into Britain, rather than allowing foreign firms to off-shore them to France, Germany and Sweden.

That was why corporate sponsors and business groups were in the front row of the conference hall, and why the Confederation of British Industry, the chief lobby for British capitalism, sounded excited at the prospect of Great British Energy “channelling catalytic public investment to spur innovation”.

As Starmer highlighted, Labour was now the party of “sound money”, in stark contrast to the sclerotic and corrupt rule of the Conservative Party.

But the media’s portrayal of a sensible, mature Starmer using caution and restraint as tools to gradually win back wavering refugees from Labour bears little resemblance to reality. That has been underlined by what has been happening outside the conference hall - much of it out of wider public view.

The energy issue is a case in point. Surveys have consistently shown that a large majority of voters - and exactly those in the Red Wall constituencies Labour is trying to win over - favour the nationalisation of major utilities, such as energy, water and postal services. Even most Tory voters prefer public ownership.

Nationalisation was one of Starmer’s main pledges when he was running for election as Labour leader. So why now, two years later, is Labour treating it as a toxic policy that can only serve as a vote-loser, when that assessment flies in the face of all evidence? And why take such an unyielding position when a cost-of-living crisis, rooted in skyrocketing energy prices, makes an even stronger case for nationalisation?

The answer is not to be found in any desire to win back traditional Labour voters, or even floating voters.

Or what about this: though most Britons will not have heard about it, Starmer’s Labour Party ejected from the conference an elderly Jewish woman and longtime party activist, Naomi Wimborne-Idrissi. You can be sure that had Corbyn’s Labour done such a thing, it would have made front-page headlines and been cited as further evidence of the party being institutionally antisemitic.

In fact, Starmer’s party has been waging an unseen war on non-Zionist Jewish members in Labour who reject the IHRA definition of antisemitism, which claims it is antisemitic to cast the State of Israel as a racist project. Corbyn in the end was forced to adopt this definition.

Jewish Voice for Labour estimates that Jewish members are five times more likely to face antisemitism charges than non-Jews. Last week, Wimborne-Idrissi was kicked off the National Executive Committee, even though she was the only Jew elected to Labour’s governing body.

Starmer has invested an inordinate amount of time and energy in hounding these non-Zionist Jews out of Labour, on the assumption - all too correct - that the media would not make a fuss.

But what does this tell us about the media’s narrative that the need to chase after votes has been making Starmer so cautious? On the issue of mistreating Jewish members, he appears to be a zealot. Do Red Wall Labour voters really care so much about what, to most of them, would seem obscure internal Jewish squabbles? Will their voting intentions be shaped by whether or not Israel is considered an apartheid state, or who counts as a “proper” Jew?

Is this energy-depleting campaign of persecution, to no obvious political advantage, really a way to regain the trust of most of Labour’s traditional supporters in the North and Midlands?

Spun out of thin air

Or what about Labour’s growing purges of long-time Labour activists in some of its heartlands, such as Wallasey, in Merseyside, where the whole constituency party was suspended and politically neutered for more than a year, as a new Al Jazeera film documents in detail? These party loyalists have been falsely maligned as homophobic, “entryists” and “militants” because they are on the party’s left and support Corbyn’s political programme.

How do these attacks on the Labour faithful make the party more appealing in its heartlands? 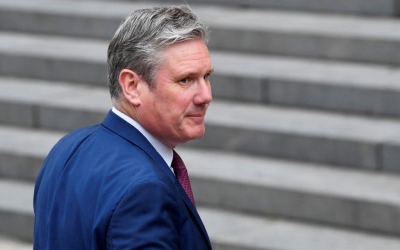 Equally, how is Starmer encouraging traditional Labour voters to return to the fold in places like Liverpool, where the party conference was staged, by overturning a decades-long Labour boycott of the Sun? The paper has been shunned by Liverpool since it vilified its football fans over the 1989 Hillsborough disaster, which caused the deaths of 97 people.

Starmer has incensed Liverpudlians by writing commentaries for the newspaper, and accrediting its journalists at the conference.

The Labour party had not provided Middle East Eye with a response by the time of publication.

The truth is, none of these moves was necessary to win over traditional Labour voters. In most cases, they will have risked alienating sections of them.

It is the red-tops - and the billionaires and big business behind them - that will savage Starmer if he backs nationalisation. It is the Jewish Chronicle that will feed the rest of the media with antisemitism scare stories, as it did with Corbyn, if Starmer allows criticism of Israel, a vital piston in the West’s war machine. And it is the approval of Rupert Murdoch and the Sun that Starmer needs more than Liverpool’s voters to reach No 10.

Whatever Starmer’s personal politics, the Labour leader absorbed a very harsh lesson from the five years of watching his predecessor’s treatment. He witnessed the British establishment eviscerate Corbyn: from army generals threatening to mutiny should the then-Labour leader win a national election, to his treatment as a Russian spy, to his character assassination as an antisemite.

Starmer understood from Corbyn’s treatment that evidence was not needed. Damaging narratives could be spun out of thin air. And so he dares not put a foot wrong.

Most of all, he learned that the establishment and its media have the power to destroy any politician who strays beyond a centrist line; any leader who does not ensure Britain’s yawning inequality in wealth remains fundamentally untouched, and its role in shoring up the West’s resource-grabbing war industries stays unchecked.

Acknowledging this distinction is not a trivial matter. It is critically important. And few, even on the left, are ready to concede it.

If Starmer is simply pandering to the more conservative instincts of traditional Labour voters, as the establishment media would have us believe, then the Labour leader can distract them with Union Jacks and national anthems to win power. Once safely installed in Downing Street, he could exploit his success to offer genuinely progressive policies - policies that would improve the lives of his Red Wall voters and earn their long-term loyalty.

His function in government ... will be to make neoliberalism look caring, to distract from the reality of ever-greater wealth polarisation

This view - that Starmer is playing cynical politics - holds sway among much of the Labour membership. They assume he will emerge from his tawdry cocoon, once elected prime minister, as a beautiful butterfly.

But the evidence suggests something quite different: that Starmer has been tamed like a circus lion, whipped into line by the establishment. Those pressures won’t lift once he is in government. They will intensify.

Just as Starmer abandoned the most progressive policies he embraced during the Labour leadership campaign as soon as he won, he will further moderate even his current modest proposals as soon as he forms a government. He will constantly need to prove that he is a reliable servant of an establishment that can crush him whenever it desires.

His function in government - an increasingly difficult one - will be to make neoliberalism look caring, to distract from the reality of ever-greater wealth polarisation. At the conference last week, Starmer put on a good show - maybe good enough that he will be ushered into Downing Street. 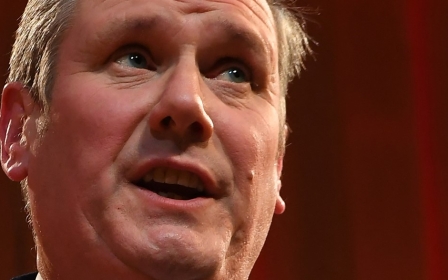 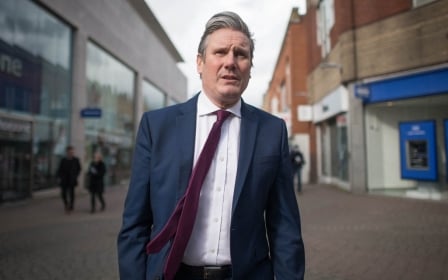 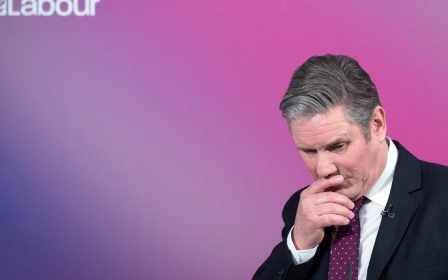