US ‘democracy promotion’ in Ukraine is about dominating ‘Greater Middle East’ Russia’s decision to stop shipping gas to Europe through Ukraine is the latest in a series of geopolitical moves and counter-moves that is unravelling the apparent “détente” of the post-Cold War era.

While Putin’s imperialist ambitions in Ukraine are clear for all to see, less attention has been paid to US strategy, which aims to destabilise Russian influence and cement its domination of Eurasia and the Middle East.

Last year, in a meeting on 11 September between US Secretary of State, John Kerry and King Abdullah of Saudi Arabia, the two governments reportedly made a decision to join forces in launching an energy war by getting Saudi Arabia to sell its oil at below market price. The idea was to at once crush oil export competition from rivals Russia, Iran, Syria and Venezuela, and to reduce their economic, and hence, geopolitical clout on the world stage. The mechanism was oil prices.

However, the policy may have been brokered much earlier. In March of that year, President Obama visited King Abdullah in Riyadh to reach an agreement on a range of strategic issues. Some analysts at that time said it was likely Obama would try to encourage the Saudis to use oil leverage to pressure Russia. The Russians themselves predicted the strategy, with an April headline in Pravda saying “Obama wants Saudi Arabia to destroy Russian economy.”

The current policy of pumping high at low prices, despite the protests of the other OPEC oil powers, is likely not just a Saudi policy – but a joint US-Saudi strategy to glut oil markets, depress oil prices, and thus undercut the oil revenues of the “axis” of geopolitical players emerging under Russia’s wing. Saudi Arabia is the only country with sufficient economic clout and production capacity to do this, and withstand the reduction in profits from the dramatically lower oil prices.

Much of the press has wrongly assumed that Saudi Arabia’s chief concern is America’s shale gas industry, whose meteoric rise and export ambitions threatens to undermine Saudi hegemony over global oil markets. While the lower oil prices have already hit the US shale industry hard by reducing their profitability – investment and production costs are too relative to such prices – the question remains as to why the US government agreed to the Saudi strategy.

This can only mean one thing: the current strategy is meant to be a temporary one, and the Obama administration believes that when the strategy fulfills its objectives, it will not be too late for the shale gas industry. US officials have said as much, with some jubilance.

So what are those objectives? US-Russian rivalry over Ukraine is nothing new. Ever since the end of the Cold War, the US had adopted a strategy of expansion and encroachment on Russia through the proliferation of military bases in the Balkans, Central Asia and Eastern Europe, and the opening up of those regions to American and European investors. Ukraine plays a particularly significant role in this New Cold War as a geopolitical pivot, control of which can have wide-ranging consequences for global order.

In April 2004, the UK Ministry of Defence published a report on the need for the West to “clarify its thinking and strategy on Ukraine,” specifically in terms of “anchoring and eventually integrating those countries east of the new border.” The report, titled “A Strategy for Integrating Ukraine into the West,” was authored by the late Ronald D Asmus – a former deputy assistant secretary of state for European affairs in the US State Department, who played an instrumental role in NATO expansion.

Asmus argued that one “important reason why Ukraine is so important strategically has to do with the Greater Middle East.” To ward off threats to trans-Atlantic security, Asmus wrote, the West must “anchor Turkey, Ukraine and the Black Sea region as part of our community and as a platform from which to radiate stability and influence further east and south. As opposed to viewing this region as the far eastern periphery of the current West, we need to think of it as our strategic axis as the Western alliance pivots to be able to project influence and power south into the Greater Middle East.”

The other goal is to cut-short Russia’s potential ambitions to expand its regional influence. A democratised and anchored Ukraine is a “good incentive and guarantee” against Russia succumbing to “the imperial temptation in its relations with Europe and the West.” While this seems reasonable, less so was Asmus’ long-term vision, which appears to reflect the longstanding thinking of the State Department – the final objective of regime-change in Russia:

“While working in the State Department in the 1990s, I would often tell my staff that we should think about policy in terms of a 10, 25 and 50 year plan. It reflected my view that the West would be considered to have failed if we could not anchor and integrate Central and Eastern Europe within a decade of their liberation from communism. The 25 year plan was a reference to the longer-term task of integrating Ukraine and the half century mark was for Russia.”

Asmus’ ensuing recommendations for action fell just short of a call to arms:

“… we have to fight and win the intellectual and political battle for a new definition of a wider Europe that includes Ukraine. And Ukraine will have to help us win that battle through its actions and performance. In my view, this wider vision should also include Turkey and have a place for the southern Caucuses as well.”

The execution of this strategy for NATO expansionism through Europe requires “the active support and enlightened leadership of the United States,” advocated Asmus, who claimed that the US role in successfully bringing Central Asian republics into the fold of the Euro-Atlantic alliance proved its viability. “Washington can use its political muscle and much smaller levels of assistance to nonetheless be a significant catalyst and force pushing for internal pro-democratic reform,” he added. “And American NGOs and other private groups can also play a key role in assisting Ukraine.”

Of course, massive human rights problems, democratic deficit and endemic corruption in the pro-US regimes across Central Asia all raise questions about the extent to which “democracy” is so central to US regional ambitions.

Asmus’ report was released by the Conflict Studies Research Centre of the UK Ministry of Defence’s internal think-tank, the Defence Academy, demonstrating Britain’s central role in what is ultimately an American strategy. It reveals that far from simply reacting to Russian imperialism, US ambitions for the region have been interventionist from the start, aiming to deploy a wide range of diplomatic, political, economic and other pressures to ply Ukraine out from under Russian influence, and into the orbit of NATO.

The imperative for “democracy promotion” in these post-Soviet states is more about public branding than reality. In his seminal study of US policy in the region after the Cold War, “Branding Democracy: US Regime-Change in Post-Soviet Eastern Europe”, Professor Gerald Sussman of Portland State University argues that the US “actively encouraged and helped coordinate political destabilisation and street mobilisations in the region.” These efforts subsequently deposed “Eduard Shevardnadze in Georgia and invalidated the election of Viktor Yanukovych in Ukraine.”

That is not to say that popular social movements and rebellions were not real, or did not have legitimate grievances. The problem for Professor Sussman is that: “Foreign electoral intervention helped to politically engineer their replacements with pro-Western politicians who, in the name of democracy, were expected to take on ‘reforms’ in concert with the state and commercial interests of the United States, the European Union, the WTO and NATO.”

The same year Asmus published his report with the British MoD, his administration gave $65 million in aid for “democracy training” to Ukrainian opposition leaders and political activists. Some of this money went to pay for then opposition leader Viktor Yushchenko to meet US leaders and help underwrite exit polls indicating he won in his disputed elections.

Under Obama, such covert assistance has accelerated in a way that would make Bush blush. In a speech at the National Press Club in Washington DC in December 2013, as Ukraine's Maidan Square clashes escalated, Victoria Nuland – assistant secretary of state for European affairs at the State Department – confirmed that the US had invested “over $5 billion” to “ensure a secure and prosperous and democratic Ukraine” – she went on to congratulate the “Euromaidan” movement.

While Russian belligerence and support for corrupt authoritarianism in Ukraine is all too real, so is the West’s unabashed support for Kiev’s new quasi-fascist junta, complete with neo-Nazi militias, currently being assisted by US military, CIA and FBI "advisers", apparently operating under the rubric of CIA director John Brennan. We should not be surprised by such collaboration. The US has a long and sordid history of covertly interfering in Ukraine through ultra-nationalist, Nazi and neo-Nazi factions, many of which had been rehabilitated by previous corrupt Ukrainian “democrats” favoured by the State Department.

Unsurprisingly, then, the US-backed regime in Kiev under Nuland’s new flavour of the year, pro-US prime minister Arseniy Yatsenyuk (described by Nuland as “the guy who’s got the economic experience” – he’s an ex-banker), is committing war crimes with impunity according to Human Rights Watch: including indiscriminate shelling of populated areas in eastern Ukraine with Grad rockets and cluster bombs. Russian-backed rebels are hardly innocent either, participating in their fair share of brutalities.

As usual, civilians on both sides are the main victims in a US-Russia proxy war for power and profit.

Photo: US Secretary of State John Kerry and King Abdullah of Saudi Arabia, reportedly made a pact to wage an energy war (AFP) 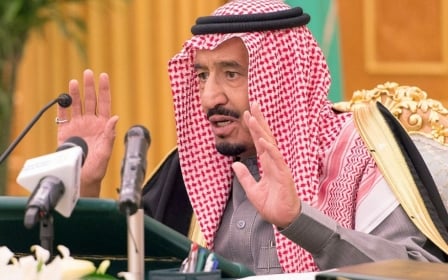