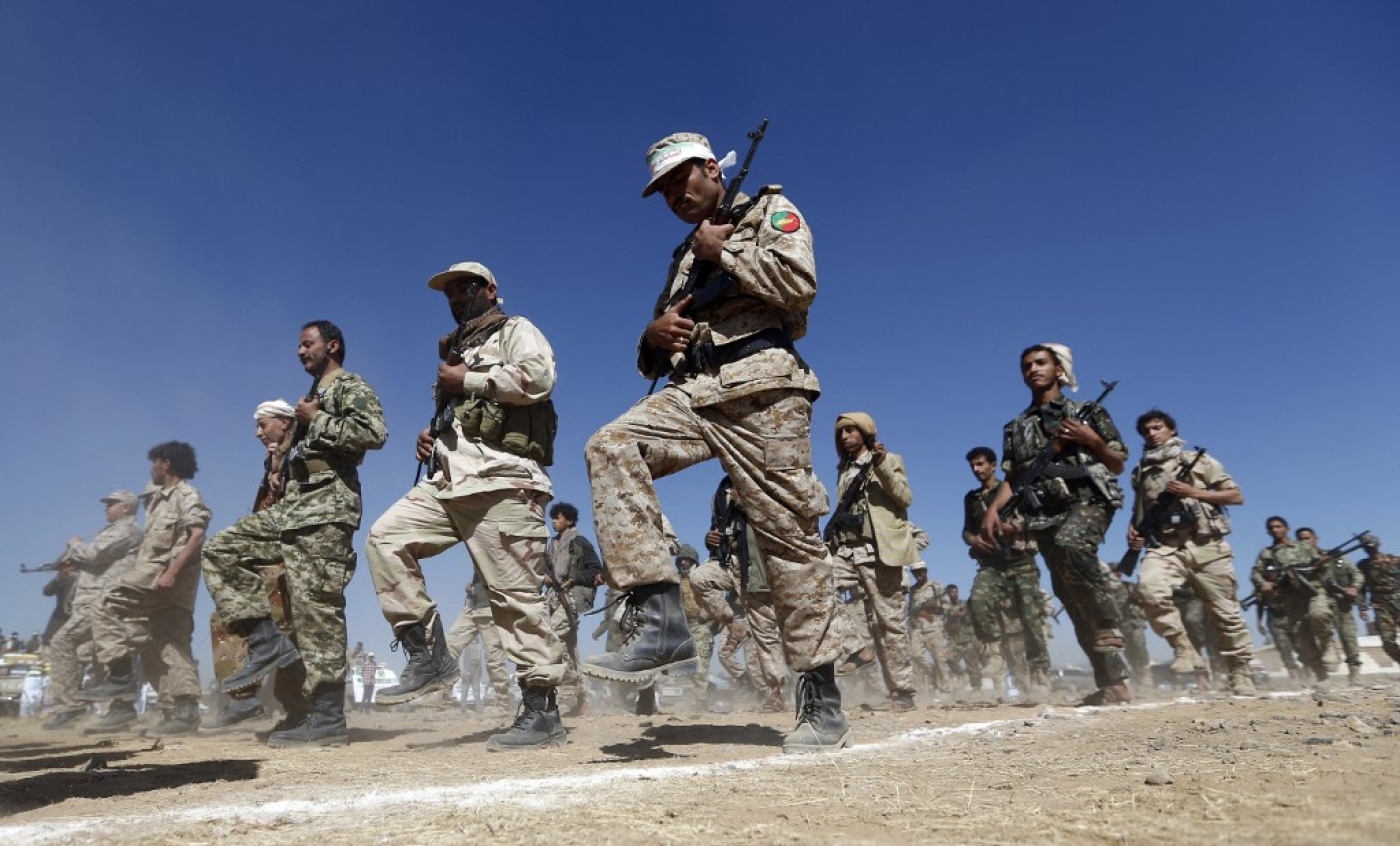 Houthi fighters take part in a gathering in the capital, Sanaa, in 2017 (AFP)

The US decision to reverse the designation of Yemen’s Houthis as a terrorist organisation could complicate the peace process if strict conditions for a return to political engagement are not imposed on the rebel group, according to Yemeni experts.

While analysts and human rights defenders do not condone the terrorist designation, they are concerned over the lack of US and international pressure on the Houthis, as a UN special envoy visited Iran this week to discuss a resumption of peace talks.

"Removing the designation of terrorist group without asking the Houthis for a return to democratic practices and a change in their terror policies against the Yemeni population is a mistake," Bushra Nasr, a Yemeni economic development expert and human rights activist, told journalists in Geneva.

The Trump administration formally designated the Houthis as a terrorist organisation on 19 January, just one day before leaving office. The move stirred criticism at the UN and among other international humanitarian organisations, who feared it would complicate peace efforts and hamper aid delivery.

Last week, the US State Department announced its decision to revoke the designation, in a bid to avert a further deterioration in what the UN describes as the worst humanitarian crisis in the world. The announcement came just days after the Biden administration said it would suspend and review arms sales to Saudi Arabia and the United Arab Emirates, the two Gulf countries leading the war on the Houthis.

"There is no doubt that the Houthis use terror practices against civilians and are committing human rights violations, as are the members of the Gulf coalition," said Ahmed al-Dubai, a professor at Edinburgh Napier University. "And that is reason enough to peg the removal of [the] terrorist designation to a return to negotiations and democratic principles."

Addressing members of the press corps in Geneva, Yemen experts and human rights activists said that human rights violations against civilians, along with theological indoctrination by the Houthis, were being under-reported by international media.

"Both the coalition and the Houthis are responsible for blatant violations of human rights, but the international community is clearly turning a blind eye to the fact that, under the Houthis, Yemenis are becoming subjects to a theocratic regime," Nasr said.

Since 2015, Yemen's civil war between the exiled government of President Abd Rabbuh Mansour Hadi and the Houthis has become a proxy conflict between a Saudi-led coalition and Iran, although the extent of Tehran's support is controversial and the subject of debate among experts.

The Houthis emerged in the 1990s as a resistance movement to late president Ali Abdullah Saleh and the systematic corruption of his state apparatus. Sidelined in Yemen's pre-war politics, in the wake of the 2011 uprising, the Houthis refused to recognise the Sunni-majority government of Hadi, who took office after a national dialogue process. Hadi was perceived as a Saudi stooge who would restore the pre-revolution status quo.

The Houthis also felt the federalist arrangements achieved by the political process did not meet their expectations. In 2014, they seized the capital, Sanaa, and started expanding towards central Yemen, triggering a revival of Yemen's southern separatist movement and leading to a whole-scale domestic conflict. The Saudi-led coalition began intervening in March 2015.

Six years into war, 80 percent of Yemen's population live in areas controlled by Houthis. They have departed from their initial connotation of a popular resistance movement fighting for justice. They have dismantled state institutions and arrested and tortured former officials, political opponents and journalists. Theological indoctrination in schools and the recruitment of child soldiers for the front lines have been widely documented.

Their isolation from the rest of Yemen's political system, estrangement of most of the population under their rule, and appalling human rights violations are playing right into the hands of the government and its Gulf allies, whose propaganda campaigns have never ceased to portray the movement as a terrorist group.

The Houthis are part of the Zaidi Shia minority, the faith of around a third of Yemen's population, although not all Zaidis support the Houthis. 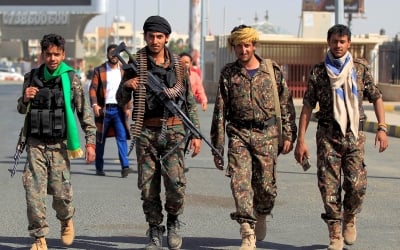 A UN report confirmed that the Houthis have subjected children to theological brainwashing in schools, and that both boys and girls take part in military training and warfare, with hundreds of cases documented. Boys and girls aged between seven and 17 are recruited by the Houthis through campaigns inside schools and detention centres.

There are no clean hands in the war in Yemen. The government and coalition forces also use children as soldiers, taking advantage of the poor living conditions in which many families languish.

The use of starvation by both sides as a weapon of war has become another controversial aspect of the conflict, with UN expert Kamel Jendoubi noting in a briefing last year: "Civilians in Yemen are not starving, they are being starved by the parties to the conflict." Millions of Yemenis are now living on the edge of famine.

According to Jan Egeland, the secretary-general of the Norwegian Refugee Council, which has 300 staff in the field in Yemen, humanitarian agencies have been impeded from delivering  aid by both sides.

"We have had endless problems with the Coalition  and with the Saudi's shelling that has never  ceased," said Egeland addressing the UN press corps. "With the Houthis too, there have been difficulties, although the situation has been improving as of late."

Egeland said the Trump administration's move came on top of a humanitarian crisis of "biblical proportions".  "Humanitarian aid in Yemen has been politicized because there are powerful powers involved and western countries  on the side of the Saudis. France and the UK have no clean hands either," said Egeland.

According to Professor Dubai at Edinburgh Napier University, the US decision to revoke the Houthis' terrorist designation will appease Iran as much as its introduction appeased Saudi Arabia: "Yemen is being used, yet again, as a bargaining chip in the geopolitical games of the region, for which Yemenis will pay the price one way or another.

"Foreign meddlers - Saudis, Emiratis and Iranians - have to be isolated and Yemenis have to start direct talks."

Foreign interference has added a layer of sectarianism to a conflict which was primarily a civil war with social, ethnic and economic roots. But comprehending this multilayered structure of Yemen politics is key to a resolution of the conflict in realistic terms.

Discontent with the work of UN envoy Martin Griffiths has grown, as Yemenis have expressed concerns that his simplistic approach of a "conflict between two sides" does not reflect the complexity and volatility of Yemen's politics.

"The UN envoy has... no vision or plan for its solution," Dubai said.

UN-led peace efforts have been deadlocked since the 2018 Stockholm agreement, which was limited to the areas of Hodeidah city and the ports of Hodeidah, Salif and Ras Issa, and which also envisaged a mechanism for prisoner exchange. But UN progress on a broader political settlement has been virtually non-existent. Yemen War
If Joe Biden keeps his word, he could end the Saudi war on Yemen
Andrew Smith