When it comes to Palestine,'taking sides' and 'solutions' are not mutually exclusive

Ben White
When discussing the Israeli-Palestinian conflict, the language of 'moderate majorities on both sides' wanting peace ignores the asymmetrical power relations on the ground 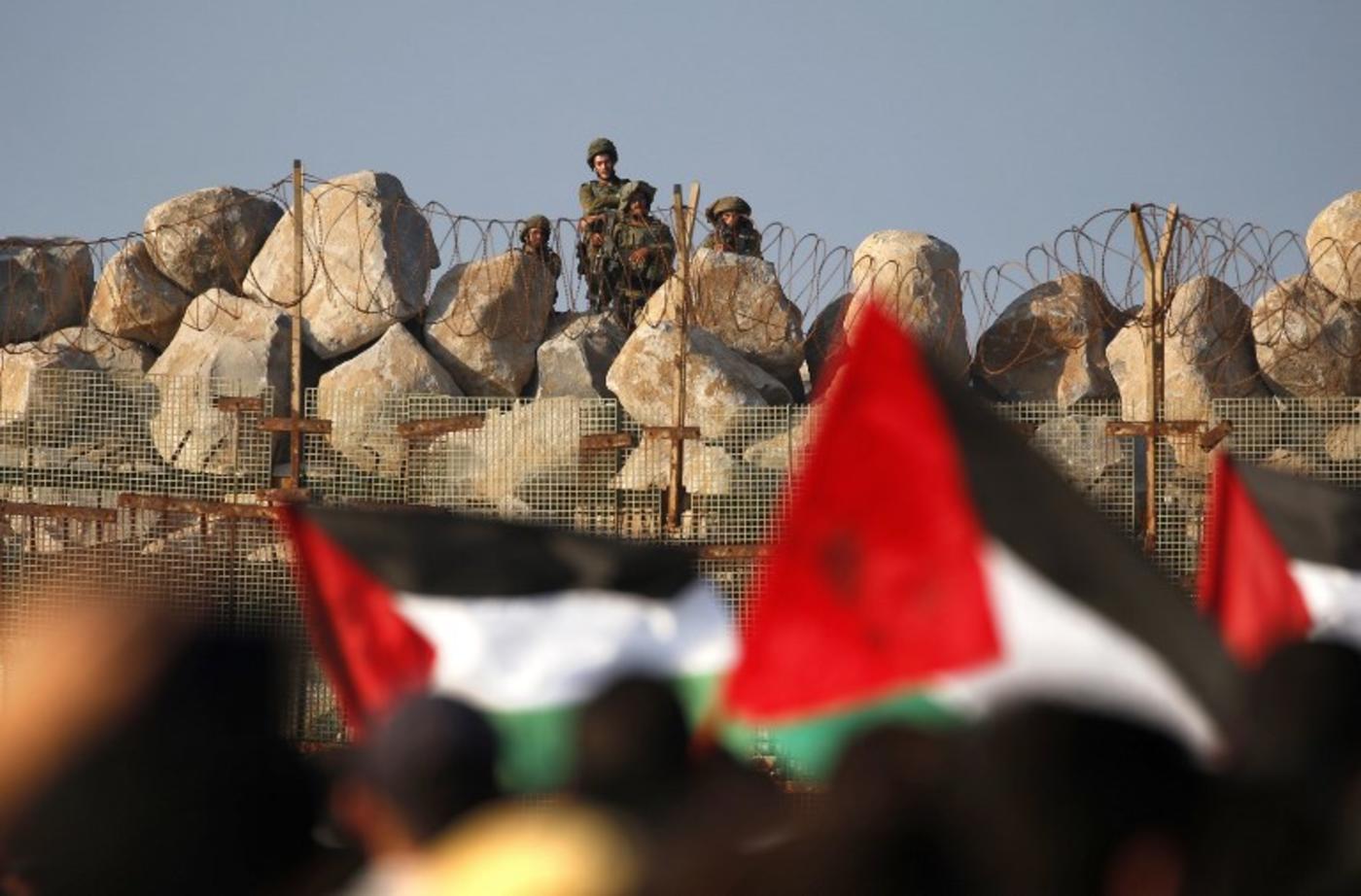 Back in August, I received an invitation from an organisation called Solutions Not Sides (SNS) to be a speaker at their Student Leadership Programme event in London in early September. After some research, I declined the invitation - and I want to explain why in a public forum.

Since 2010, SNS has been delivering an education programme in "schools, universities and community groups," intended "to counter extreme narratives on Israel-Palestine" among young people aged 15 to 25. According to SNS, the total number of participants thus far exceeds 20,000.

The problems with SNS are, broadly speaking, threefold. First is the issue of false symmetry: when discussing Israel and the Palestinians, SNS's language of "both sides" far outnumbers its references to asymmetrical power relations on the ground.

A key part of this discourse is the framing of the "Israeli-Palestinian conflict" as a battle of "moderate majorities" versus "extremists". As SNS states on its "About" page, the goal is to show students "that the conflict is complex and that the majority of citizens in the region on both sides just want peace".

But the idea that the core obstacle to a political breakthrough is a number of extremists on "both sides" who hold to ransom, or silence, parallel "moderate majorities" just doesn’t stack up.

The Israeli public repeatedly elects governments who oppose Palestinian self-determination, expand settlements, and use devastating violence to maintain the status quo. Everyone wants 'peace' - but on what terms?

Israel is a powerful occupier; Palestinians are stateless and occupied. The Israeli public repeatedly elects governments who oppose Palestinian self-determination, expand settlements, and use devastating violence to maintain the status quo. Everyone wants "peace" - but on what terms?

A second, and disturbing, dimension to SNS's work, is the extent to which it incorporates and echoes the British state’s "counter-extremism" policy and narratives. In its "Information for donors," SNS says "the problem" to which it seeks to be the solution is "a rise in extremist movements that propagate the myth of an inevitable dichotomy between the 'Secular West' and the 'Muslim East'," movements that use Palestine in "their recruitment strategies".

In a report on a tour of the British Midlands in spring 2017, SNS stated that the "majority" of targeted students came "from Muslim backgrounds," adding that "to our knowledge, we did not work with any Jewish students" on account of the region's "very small Jewish population".

The report added that "the Midlands continues to be a target area for SNS where we encounter some troubling views regarding violence and zero-sum narratives". It did not need to spell out who exactly was deemed to hold these "troubling views".

In a document titled "Solutions not Sides Business Plan," the organisation's "target areas" are defined as "the areas [of Britain] with the largest populations of Jews and/or Muslims". However, the 260,000 students SNS hopes to reach are overwhelmingly Muslim (some 90 percent).

This is the context in which to interpret one of the "quantitative outcomes" identified in SNS’s "Business Plan": targeting youth who could "be vulnerable to racist and extremist messaging".

In an emailed response, SNS denied a troubling focus on targeting British Muslims. "We work with young people from across the country, from diverse communities, with the 'focus' being on areas with higher-than-average recorded levels of anti-Muslim and anti-Jewish hate," SNS said.

SNS also said that their work with Islamic and Jewish schools, as well as community and youth groups, reflects an interest from these communities "in excess of the wider population," and that the reference to vulnerability is with respect to age, "and does not refer to a specific community".

The third issue with SNS is that the impact of its work is to undermine Palestine solidarity activism, and there are grounds for supposing that this is a goal, not an unintended consequence. In SNS materials, Palestine solidarity is presented as problematic, one side of an "extremist" coin equivalent to being fanatically pro-Israel.

In the donor brochure, support for Palestine in the progressive Occupy movement is equated to far-right thugs "raising the Israeli flag at their rallies".

Who is to blame?

The business plan document, meanwhile, claims that "without participation in a programme like SNS," students will "arrive on campus completely unequipped to deal with the often zero-sum atmosphere and aggressive campaigning on this issue".

SNS does not explain why students' Palestine solidarity activism, which has been at the forefront of expressions of support for Palestinian rights, should be seen as a problem or "aggressive". SNS says it aims "to shift attitudes away from supporting one side against the other"; typical student feedback in the 2018 spring term report includes that "no one should be blamed but it should be resolved," "both sides have a part to play within this conflict," "both sides are to blame" etc.

Predictably, as a 2016 blog post by an SNS intern demonstrated, the programme produces (or potentially attracts) individuals who urge Palestinians and their allies to abandon the growing civil society-based boycott campaign, and instead "channel" their "frustrations" into SNS.

SNS told me it does not promote any political positions, or take a stance for or against BDS, and claimed a number of its speakers are "vocal supporters" of BDS. According to SNS, the "optimism of young activists" who attended their leadership programme is "a welcome antidote to current UK discourse on the conflict that seems to say: 'If you are not for us, you must be against us'".

"We have always presented a pro-Palestinian perspective at our sessions, even though we do not ourselves promote a political agenda. We feel it is important to listen to young Palestinians and Israelis rather than imposing any pre-conceived ideas," SNS statement said.

Finally, it is important to note that SNS is part of an organisation called One Voice - though it is apparently planning to "become independent in the very near future," one staffer told me via email. The One Voice link is significant, and helps to explain the aforementioned political framing.

Founded in 2002, One Voice says it focuses on "leveraging ... the centrist mainstream [within the Israeli and Palestinian publics] who support resolution of the conflict through a negotiated and mutually acceptable two-state solution". What this has meant in practice is that in Israel, One Voice seeks to mobilise the "mainstream" by appealing to, and invoking, the spectre of Palestinians as a "demographic threat".

In 2010, One Voice Israel backed a two-state solution and settlement freeze as means of ensuring that Israel "remains a vibrant democracy without endangering its Jewish spirit,” with group director Tal Harris stressing the importance of "preserving a Jewish majority".

Ahead of Israeli elections in 2013, One Voice declared that "two states for two peoples" was "the only way to protect a Jewish majority". At the time, then-One Voice Europe official John Lyndon said such discourse constituted "efforts to inform, educate, mobilise the mainstream majority".

At best, SNS’s work is confused; at worst, it aims to undermine Palestine solidarity activism by exploiting concerns over "extremism"

On Twitter, Lyndon defended the use of such racist discourse as "the sort of language that appeals to mainstream Israelis" (thus undermining the whole "moderate majority" theory). Lyndon also equated Jewish Israelis' view of Palestinians as a demographic threat with unspecified "nationalist" views in Palestinian society. It was an instructive exchange.

At best, SNS's work is confused; at worst, it aims to undermine Palestine solidarity activism by exploiting concerns over "extremism".

Fighting anti-Semitism and Islamophobia and promoting positive relations between British students of different religions are important tasks in and of themselves; there is no need to undermine the Palestinian liberation struggle in order to do so.