A White Christmas in Palestine 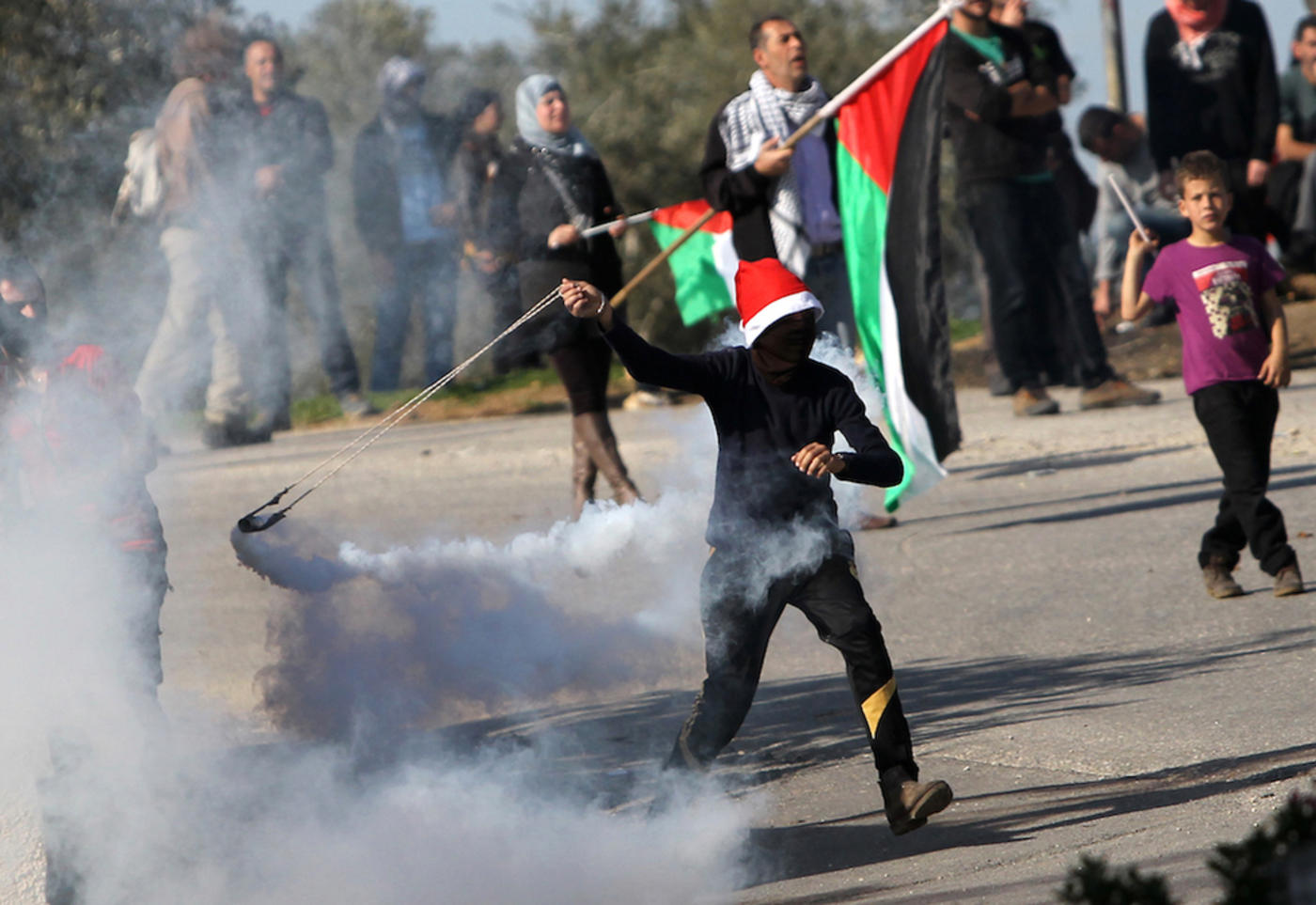 Snow came early to many parts of western Europe this year, with many hoping for it to hold until Christmas. A white Christmas is what many wish for, as families come together in a tradition rooted in the celebration of the birth of Jesus Christ.

But in the "Holy Land", a white Christmas of another kind is being inflicted on the Palestinian people. For decades now the skies of Palestine are routinely filled with white toxic tear gas that the Israeli authorities use to enforce their occupation.

Indeed, in a recent talk at the London School of Economics, UNRWA Commissioner General Pierre Krahenbuhl, quoted a yet to be published report by medical experts who found that the residents of Aida refugee camp in Bethlehem are the community most exposed to tear gas in the world.

Aida is the same place where an Israeli commander was filmed blasting the following message from his jeep's loudspeakers: "People of Aida refugee camp, we are the occupation forces. You throw stones, and we will hit you with gas until you all die. The children, the youth, the old people - you will all die. We won't leave any of you alive."

Today, as Palestinians continue to take to the streets to demand their fundamental human rights, they will continue to be met with streams of white tear gas and live bullets. Proving once again that the occupation and colonisation of Palestinian lands stops for no one, not even for Christmas

Tear gas is a chemical weapon that is supposed to cause temporary pain, and thus authorities that use it claim it as an effective tool against civil disobedience. Yet, this chemical weapon can have deadly consequences, particularly in enclosed spaces. The long-term effects of constant exposure to tear gas have not been well researched, but it is suspected that they can lead to miscarriages, still births and serious respiratory illnesses.

Palestinians know tear gas well. They know tear gas so well that when US police forces used it against Black Lives Matter protesters in Ferguson, Missouri, in 2014, Palestinians tweeted tips on the best ways to treat tear gas inhalation. Even now as I write, my nose itches at the memory of that smell. The one that fills your entire body, choking you, burning your eyes, to the point where you feel like you can't breathe. The one that sometimes literally stops you from breathing.

In 2015, 54-year-old Hashem al Azzeh, a well-known activist from Hebron, died following excessive tear gas inhalation. He was attempting to get to hospital following chest pains when Israeli soldiers who were clashing with protesters stopped him and prevented him from moving. He was soon engulfed by suffocating tear gas and stopped breathing.

In another part of Palestine, in the village of Bil'in, where villagers have been conducting weekly demonstrations for the last 12 years against the separation wall, tear gas has another deadly legacy.

Palestine has effectively served as a laboratory for Israeli-imported and exported weapons of all kinds. Israel has become one of the largest weapons exporters in the world - and it can market the technology as "combat proven". Gaza is a prime example where Israel has demonstrated some of its most devastating weapons.

In the 2008-2009 assault on Gaza, Israel extensively and repeatedly used white phosphorus in densely residential areas. Human Rights Watch called it "unlawful" and described it as a rain of fire because of its extreme burning effects on the skin.

Today, as Palestinians continue to take to the streets to demand their fundamental human rights, they will continue to be met with streams of white tear gas and live bullets, proving once again that the occupation and colonisation of Palestinian lands stops for no one, not even for Christmas.

Photo: A masked Palestinian protester wearing a Santa Claus hat prepares to hurl back a tear gas canister fired by Israeli security forces during clashes that erupted following a march organised by residents of the West Bank village Nabi Saleh to protest against the expansion of Jewish settlements on Palestinian land (AFP)