A year after Charlie Hebdo, France is ever more divided and in denial 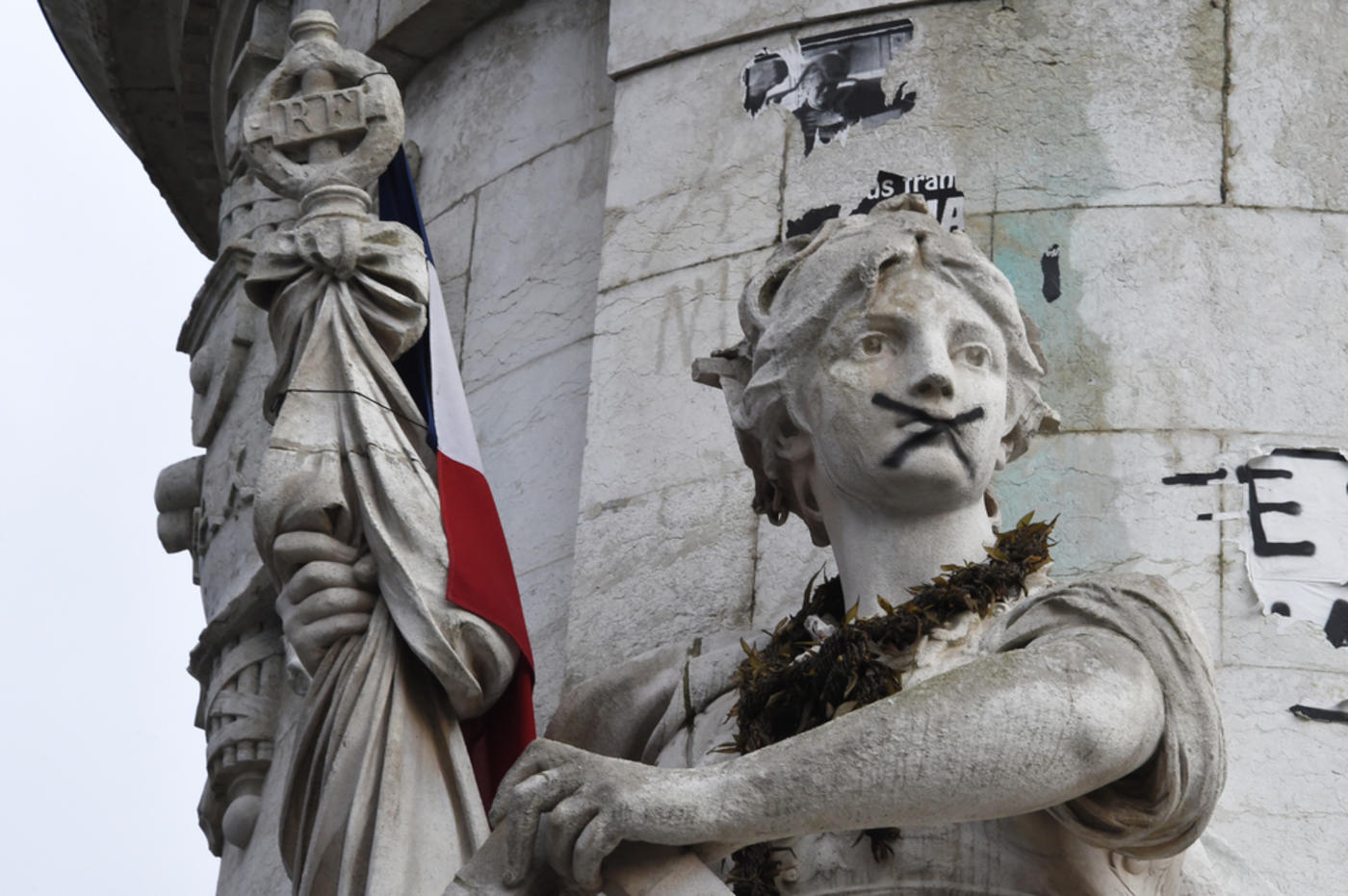 A year after the violent attack on the Charlie Hebdo offices, the magazine has retained its symbolic significance as a shorthand for freedom of expression.

Charlie Hebdo is no longer a simple magazine, it has come to represent the alleged struggle between the civilised world and the regressive forces of religious extremism – and in its transformation from contentious, polemical and frankly marginal publication, to icon of the “free world”, any nuanced analysis of its output has - internationally at least – been lost in the inevitable whitewashing required as part of its sacralisation.

Following the assault on its office, Charlie Hebdo has gone from niche read to global symbol, increasing its print run from a meagre 60,000 to a million and quadrupling its subscriptions. From struggling to stay afloat, it is now flush with cash, receiving over 4 million euros in donations, including almost a million euros from the French government. But with its newfound celebrity has come internal squabbles over money and editorial in-fighting, leading to the departure of some the mag’s remaining icons, such as the cartoonist Luz and columnist Patrick Pelloux.

In the midst of the tumult, Charlie Hebdo has struggled to stay "true" to its line, but has nonetheless managed to court controversy with some of its recent images. One such cartoon featured controversial MEP Nadine Morano as the Down-Syndrome daughter of Charles de Gaulle (De Gaulle did have daughter with Down Syndrome), an image which incurred condemnation from politicians and caused uproar among disabled charities, who accused Charlie Hebdo of being complicit in a “modern form of racist eugenics”.

Morano responded by taking the publication to court for "defamation", a situation which led to a not entirely ironic public debate in which politicians, including former government minister Valerie Pecresse, who had defended Charlie Hebdo’s free speech over the Muhammad cartoons, were now condemning it.

And in September, the magazine was the target of criticism for its depiction of drowned toddler Alan Kurdi, above the McDonald golden arches and a sign reading “almost there”, with chair of the Society of Black Lawyers, Peter Herbert denouncing it as a “purely xenophobic publication”.

But it’s not only Charlie Hebdo which has changed since the attacks. France itself is living under a state of emergency in the wake of the most recent Paris attacks, in which 130 died. This year, the National Front has made some of the most significant gains in its history. And the French are currently debating changes to the constitution which could have profound long-term implications for civil liberties in France.

On the day of the tragic anniversary, Francois Hollande used an address to police forces to defend the government’s actions under the state of emergency. Among the most contentions have been the 2,764 search warrants issued since 15 December, 87 a day.

Only 58 of these actually led to prosecution and many of them related to weapons and drugs, not the justification for the intrusive new laws, namely terrorism. Civil liberties groups have expressed concern at the targeting of Muslim organisations, including the closure of three mosques, and violent entries into homes and businesses, where doors have been kicked in, property damaged and a six-year-old child was injured in the South of France.

President Hollande also defended his proposed security law, which has come under fire for its expansion of police powers and the controversial stripping of French citizenship from dual nationals convicted of terrorism charges.

The debate has been particularly surreal given the general consensus that the new measure would in no way help in the struggle against terrorism. Some have even compared the law to one brought in under France’s fascist Vichy government, in which Jews were stripped of their citizenship.

Critics allege the move would create a two-tier system, in which ethnically non-white citizens can be treated differently to their white counterparts.

In a testament to the political confusion currently reigning in France, the Socialist government has appropriated what has long been a demand of the far right, in order to make it appear tough on terrorism.

In so doing, it cements the prevalent notion that the root cause of radicalisation is Islam – widely perceived as foreign religion despite being the second-largest religion in France – and in so doing, refuses to recognise the social and political conditions which provide the breeding ground for violent groups, absolving successive governments of their failures.

The proposal also implicitly locates the root cause of the attacks in the ascribed foreignness of the attackers as a means of cordoning off the problem as a foreign one, locating it within the already contentious realms of immigration and integration, and preserving a pseudo-purified ideal of France and its values, untainted by the actions of its own citizens.

Despite attackers in both the Charlie Hebdo-kosher grocery store incident, as well as the most recent Paris attacks being overwhelmingly French or Belgian nationals, their radical turn is consistently attributed to their ethnicity, in other words to their origins, rather than to their actual identity as Frenchmen or Belgians. The conclusion is clear – France is not in need of introspection because the problem comes from outside.

In a fitting riposte to the proposed stripping of French citizenship, one Algerian politician, Rachid Nekkaz responded  “…Algeria will never accept to be the ‘citizen bin’ of Frenchmen, born in France, educated in France, raised on the diet of the Republic’s values, then rejected by that same country. France needs to take responsibility for all its children, whether they are called Zidane, Benzema, Merah or Kouachi, for better and for worse.”

Indeed to recognise as French those Arabs who conform to France’s conception of itself, but labelling those who don’t as foreign, belies a conception of Frenchness which remains rooted in whiteness and in which brown bodies can be denied their belonging and identity – via their citizenship.

A year after the Charlie Hebdo attacks, France’s national unity march seems a vague memory. Instead, president Hollande presides over an ever divided nation in which the total absence of political vision from Left or Right has given free rein to the National Front to dictate the content of national debates. For all the talk of free speech and battles against all forms of extremism, today’s France is one in which free speech is curtailed and where the extremes dictate the beat to which politicians of all hues dance.

Photo: A statue making up part of the central Statue of Marianne is seen at Place de la Republique (Republic square) where a remembrance rally was held on 10 January, 2016 to mark a year since 1.6 million people thronged the French capital in a show of unity after attacks on the Charlie Hebdo newspaper and a Jewish supermarket (AFP). Islamophobia
France: What about facing our malaise?
Dorothée Myriam Kellou 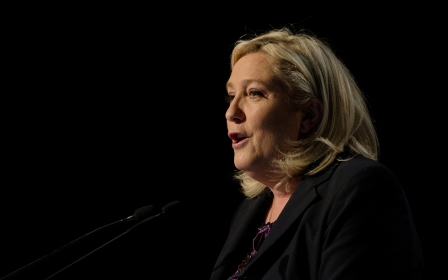 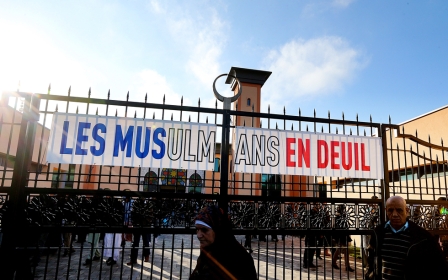