How AIPAC is losing bipartisan support in Washington

It was once described as the 'most effective' lobbying group in Washington, but AIPAC is beginning to lose support as it turns against its critics - most of whom are Democrats "A true friend of Israel." These were the words Barack Obama used when describing himself to AIPAC, a day after he secured the Democratic party nomination in 2008.

Standing in front of thousands of attendees in Washington, Obama, who was only 47 at the time, went on to thank the pro-Israel lobby for helping advance "bipartisan consensus to support and defend our ally - Israel".

Those comments were a far cry from the latter stages of his presidency, when the interest group rebuked America's first black president and spearheaded efforts to derail his signature foreign policy accomplishment - the Iran nuclear deal.

AIPAC, short for the American Israel Public Affairs Committee, has always presented itself as a bipartisan organisation aiming to maintain support for Israel from across the US political spectrum.

Republican and Democratic presidents have praised the group, and some of the measures it has pushed have gained unanimous bipartisan support in Congress.

But times are changing. Once dubbed "the most effective general interest group" by former House Speaker Newt Gingrich, AIPAC was called a "hate group" by a senior Democratic congresswoman on Wednesday.

"Hate is used as a weapon to incite and silence dissent. Unfortunately, this is my recent experience with AIPAC – the American Israel Public Affairs Committee," Congresswoman Betty McCollum said in a blistering statement.

Her photo had been featured - along with fellow House members Rashida Tlaib and Ilhan Omar - in AIPAC ads accusing "radicals in the Democratic Party" of pushing antisemitic and anti-Israel policies "down the throats of the American people".

The posts, which have since been deleted, went as far as likening Congress members critical of Israel to the Islamic State (IS) group, also known as ISIS.

Speak the truth even if your voice shakes.

I doubt our fearless colleague @BettyMcCollum04's voice is shaking, but I know she comes from a place that believes hate that incites violence doesn't belong anywhere. I commend her courage. https://t.co/uMV9cux3qg

McCollum, who had introduced a bill aiming to prevent US assistance to Israel from contributing to the imprisonment and abuse of Palestinian children, was having none of it.

"AIPAC wants its followers to believe that my bill, H.R. 2407, to protect Palestinian children from being interrogated, abused, and even tortured in Israeli military prisons is a threat more sinister than ISIS," she said.

"This is not empty political rhetoric. It is hate speech."

The response came days after AIPAC took down the ads and half-heartedly apologised for them. But the episode highlighted the erosion of that bipartisan consensus over Israel that Obama cited in 2008.

Three months after Democrats assumed majority in the US House of Representatives last year, their top leaders appeared at the annual conference of AIPAC, assuring the group that Congress will maintain its steadfast support for Israel.

There had been warning signs that the bipartisan consensus in favour of Israel may be eroding. Left-wing progressives had been increasing their clout in Democratic politics, shifting the conversation about Israel and Palestine amongst Democrats in the process.

House Speaker Nancy Pelosi and Majority Leader Steny Hoyer have kept their word to AIPAC in pushing pro-Israel measures in the congressional chambers that they control - including a resolution condemning the Boycott, Divestment and Sanctions (BDS) movement.

But with President Donald Trump giving the Israeli government everything that it wants and then some, top Democrats have found it difficult to fully back the White House's policies.

In fact, many of them forcefully rejected the president's AIPAC-backed plan to end the conflict, which would allow Israel to annex all of its illegal settlements in the West Bank. Meanwhile, progressives' criticism of Israel grew more vocal.

That has created a conundrum for AIPAC: how to favour the policies of one political party without alienating the other?

"AIPAC is dealing with a fundamental contradiction. They are promoting a policy of no accountability for Israel - a carte blanche for whatever Israel does; and they want to be bipartisan," said Omar Baddar, deputy director of the Arab American Institute, a Washington-based advocacy group.

'As the left progressive flank of the Democratic Party grows, which it clearly is, that means that there's also going to be less support for groups like AIPAC'

"There's a problem here. The reality of our political discourse is that no accountability for Israel is not a bipartisan issue."

The ads against Democrats and McCollum's forceful condemnation of the group expose that contradiction, he added.

"I really suspect it's really a matter of time before we see the next outburst," Baddar told MEE.

Beth Miller, government affairs manager at JVP Action, a political advocacy group linked to Jewish Voice for Peace, echoed Baddar's comments, saying that American progressives are adopting the Palestinian cause as a core issue in their agenda.

"It used to be true that AIPAC had bipartisan support, but that is strongly waning… As the left progressive flank of the Democratic Party grows, which it clearly is, that means that there's also going to be less support for groups like AIPAC," Miller said.

She added that advocacy for Palestinian human rights is becoming a "natural part" of the push against Trump's agenda.

"The more we as Americans learn about what is happening in Israel, the more people are supporting Palestinian human rights," Miller told MEE.

"And so, we are in a moment where groups like AIPAC that are strongly trying to push anti-Palestinian policies and anti-Palestinian rhetoric are finding themselves in an increasingly partisan space."

With Democrats moving to pick their nominee who will try to unseat Trump, that schism between the pro-Israel lobby and the party is likely to become wider.

AIPAC will not merely be torn between unconditionally supportive Republicans and Democrats more critical of Israel. Trump himself will be on the ballot, facing an opponent who will likely draw distinctions with him on foreign policy.

Moreover, Bernie Sanders, the frontrunner in the Democratic race, has called for an even-handed approach to the Middle East conflict, where US policy would not only be pro-Israel, but also "pro-Palestinian". The Vermont senator is also proposing conditioning US aid to Israel if it does not work to end the occupation and the humanitarian crisis in Gaza.

"I imagine that relationship is going to become more and more antagonistic," Baddar said.

"As time goes on, that contrast will be sharpened. I do envision a scenario in which AIPAC is going all out in attack against candidate Bernie Sanders if his lead continues."

In fact, an AIPAC-linked group has been running negative ads against Sanders, centering on his health and electability - not foreign policy.

Columnist Jonathan Tobin argued earlier this week that it was no longer feasible for AIPAC in 2020 to deliver on its mission of defending Israel in a bipartisan way.

"At a time of unprecedented hyper-partisanship, and with the possibility that support for Israel will be a point of partisan contention in the fall presidential campaign - especially if the Democrats nominate Bernie Sanders, it’s hard to see how AIPAC can continue to navigate between the parties," he wrote in the Israeli newspaper Haaretz.

"It just isn’t possible to attack Democrats who are anti-Israel without sounding pro-Trump."

The rise of Sanders in the polls and the AIPAC ads attacking Democratic Congress members point to an indisputable shift in support of Palestinians within the party.

Yet, many - if not most - Democrats in Congress have maintained their strong commitment to the US relationship with Israel and ties with AIPAC.

In fact on Thursday, the pro-Israel lobby posted several tweets thanking top Democratic legislators for denouncing the UN Human Rights Council over publishing a list of businesses with ties to West Bank settlements considered illegal by most of the international community.

Still, the attacks on Democratic Congress members put some of AIPAC's allies in the party in an uncomfortable position - between defending their colleagues and maintaining the bipartisan support that the pro-Israel lobby enjoys.

Hoyer, the number two Democrat in the House and a staunch supporter of Israel, said he was not pleased with AIPAC's recent ads.

"I strongly disagreed with the ads and it was appropriate that AIPAC apologised," Hoyer told MEE in a statement.

"The Democratic Party continues to be a party that is strongly supportive of Israel. Support for Israel should never be made into a partisan issue."

'AIPAC's language is intended to demonise, not elevate a policy debate. Vile attacks such as this may be commonplace in the Trump era, but they should never be normalised'

McCollum had called on the Democratic Party to "take a stand" in support of human rights.

"AIPAC's language is intended to demonise, not elevate a policy debate. Vile attacks such as this may be commonplace in the Trump era, but they should never be normalised."

In her statement, McCollum challenged AIPAC's claims of being a bipartisan group.

"AIPAC claims to be a bipartisan organisation, but its use of hate speech actually makes it a hate group," the congresswoman said.

"By weaponising antisemitism and hate to silence debate, AIPAC is taunting Democrats and mocking our core values.

"I hope Democrats understand what is at stake and take a stand because working to advance peace, human rights, and justice is not sinister - it is righteous."

For her part, Congresswoman Tlaib, who is Palestinian American, praised McCollum for calling out AIPAC.

"I commend the courage and leadership of my colleague, Congresswoman Betty McCollum. She's right- hate speech incites violence and seeks to silence dissent," Tlaib told MEE in an email.

"In the fight for peace, equality, dignity and human rights, we must push back and call out any attempt to stop us on the path toward justice for Palestinians, Israelis, and people across the world." 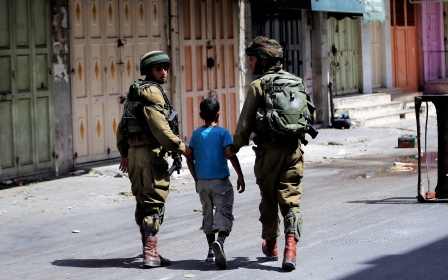