Indigenous Bahrainis, both Sunni and Shiite, have protested over an influx of foreign citizens 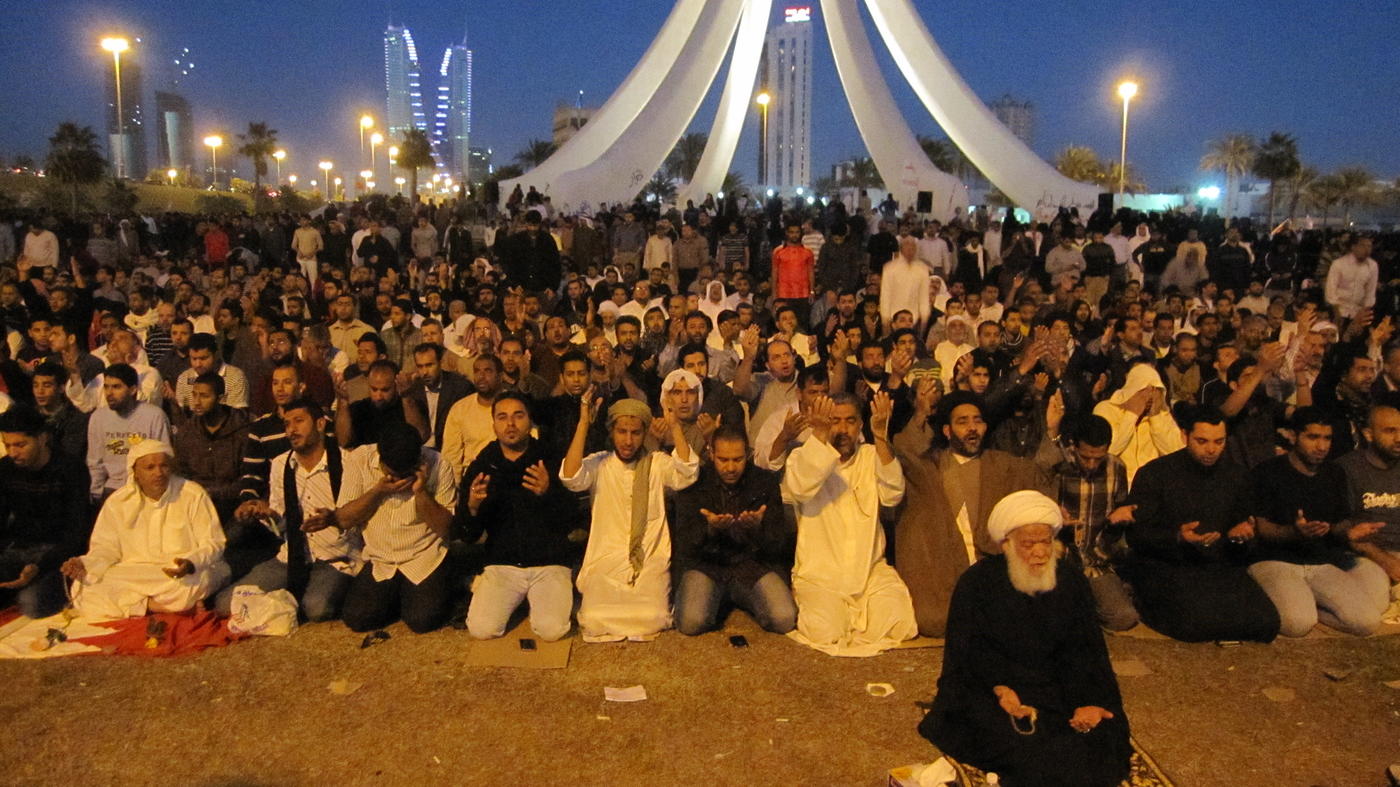 Throughout the Middle East, the Sunni-Shiite split has become a popular reference point for the supposed breakdown of colonial borders and increasing violence and unrest across the region.

In the Persian Gulf, a particular flashpoint has been the small kingdom of Bahrain, where constant demonstrations against the rule of the Al-Khalifa monarchy and subsequent crackdowns by the government, has coincided with denaturalisation and arrest of predominantly Shiite human rights activists and a continuous influx of new, predominantly Sunni, citizens through the naturalisation of migrants and tribal leaders from around the Gulf.

Underlying these actions, there has been evidence of a more pervasive and long-term strategy to affect a fundamental shift in Bahraini society.

The process of stripping the citizenship of Shiite nationals in Bahrain, while at the same time importing and naturalising foreigners has been seen by indigenous Bahrainis as an attempt to change the demographics of the small country and create a loyal, Sunni-majority state.

On Saturday, 23rd of August, thousands of Bahraini Shiites took to the streets in the village of Daih, near the capital Manama holding banners reading "the indigenous people of Bahrain are in danger," and waving Bahraini flags.

The protesters accused the government of "following a destructive policy aimed at replacing the indigenous people with regime supporters" and warned that “naturalising poses a threat to Bahrain's security and stability.”

But while many still emphasise the seemingly sectarian nature of the programme, activists have said the main goal is to create a nation of pliant and trustworthy citizens.

“It is about building a population of regime loyalists whether Shiite or Sunni,” says Ahmed Ali, head of legal affairs for the Bahrain Institute for Rights and Democracy (BIRD).

“You can see this only recently with the King opening up to medieval ‘loyalty pledges’ from ‘tribes’ around Bahrain,” he told Middle East Eye.

“Of course, many of these tribes are not indigenous Bahraini, many live in Saudi Arabia and Qatar, and many did not exist in Bahrain before the Al Khalifa came in. It is also conducted through the revocation of citizenship.”

“This is their ideal population, and one they have been slowly building.”

MEE contacted the embassy of Bahrain in London to inquire about the allegations of planned demographic change, but recieved no response.

As early as 1982, Ian Henderson, the Scotland-born head of Bahrain’s General Directorate for State Security Investigations - and nicknamed the ‘Butcher of Bahrain’ for his alleged involvement in torture and suppressing dissent during the 80’s and 90’s - expressed his concerns to a British official that the Bahraini government was increasingly deporting Shiite, many of them to Iran.

“About 500 people had by now been deported, many of them Bahraini passport holders,” said the official in a report.

“Ian Henderson had told the Emir that the young men in this number would simply go to fill the military wing of the [Shiite Islamist] ‘Da’wa’ movement now forming in Iran.”

He also noted that the deportations “undermined any chance of reconciliation between the Shiite community and the present regime in Bahrain.”

“It sort of shows that it dates back to, I would say, even before the Iranian revolution,” says Marc Owen Jones of Bahrain Watch, “that there was this increasingly hard-lined policy where they wanted to get rid of the Shiite or disempower them.”

“It’s not going to go to the extent that they cleanse the island but I think certainly until they have a Sunni majority, that seems feasible.”

Dr. Saaed Shehabi has been exiled from Bahrain for decades and faces life imprisonment in the country. In 2012, he along with 30 other Bahrainis had his citizenship stripped.

“They have always targeted me in the past in the 90's and the 80's, sentenced me to various prison sentences,” he told MEE. “Now, any activist is likely to have their nationality revoked, as well as non-activists - they are also having their nationalities revoked.”

Though he acknowledges the persecution of Shiites, he told MEE that he saw that as a tactical move by the government.

“They use sectarianism as a tool of oppression – they use the prevailing circumstances to woo the Sunnis to their fold by being seen to be targeting Shiites, but I assure you in the past Sunnis had their nationalities revoked,” he said.

“Although in most cases the nationalities were reinstated subsequently.”

He also emphasised that “this time they are intent on demographic change, so they revoked the nationalities of natives, but they give nationalities to those from abroad.”

In 2006, a Sudan-born British doctor called Salah Al Bander, who was working as an adviser to the Cabinet Affairs Ministry, leaked a 217-page report to the Gulf Centre for Democratic Development which purported to show a network of officials within Bahrain who were operating with intent to perpetuate the disenfranchisement of Shiites within Bahrain.

For the revelations, Dr. Bander was deported from the country and now resides in Cambridge in Britain.

Bander also emphasised that religious sectarianism was being used by the government in order to consolidate their control of the "billions of dollars in the banks of Bahrain."

"It is just a tool to control the resources and its nothing to do with the rising Sunni-Shiite conflict.”

The government of Bahrain has not conducted an official survey of the demographic make-up of the country since 1941 when it registered Shiite as composing 53% of the population. Media reports in recent years have tend to hover around a figure of 70 or 75%, but these are normally acknowledged as imprecise.

Justin Gengler, Senior Researcher at the Social and Economic Survey Research Institute of Qatar University, has suggested, through his own research, that the figure is more likely 57.6%.

The figure of 75%, he said, "fails to account for the high rate of Sunni naturalization of the previous decade or more."

Statistics released by the opposition Al Wefaq movement suggested over 95,000 foreigners had been naturalised by the Bahraini government since 2002.

“The percentage of Shiite has been reduced - since 2011 thousands of people left the country because of the repression,” says Nabeel Rajab, President of the Bahrain Centre for Human Rights.

He said that decades of disenfranchisement had ultimately led to to the Shiite uprisings that reached a peak in 2011.

Contrary to government claims of an organised attempt to implement a Shiite Islamic state in Bahrain, which they claim is underpinned by support flowing from Iran, the discontent flowed from a desire for a larger role in the social and political management of the country.

“They are always noisy, demanding rights, freedom and social justice because they were marginalised. So the government came to the conclusion that the Shiite had to be replaced with other people.”

The Bahrain government, he told MEE, has been involved in creating a social melting-pot as a means of maintaining dominance over a restive population.

“From India, from Pakistan, from Jordan, from Yemen, Syria, Iraq and Egypt...you have a lot of people, tens of thousands of people, were naturalised in the past years,” he said. “The Sunni in Bahrain are not united like the Shiite - all the Shiite are indigenous population and so they are united.”

“The Sunnis don’t come from the same background and they might not speak the same language. So they can’t unify.”

He pointed out that although the strategy of the government was primarily aimed at creating a population of loyalists, the strong links between pillars of the Sunni community and the government limited their independence as political actors.

“Economically, they [Sunnis] are connected to the government, religiously they are going to the Mosque that is made by the government,” he explained.

“And they are working for the government in the army or police where they are much influenced in their economic living by the government. So you will realise that among Sunnis and particularly among naturalised people the government have a lot of influence.”

Conversely, he said, Shiite Mosques were set up independently from the government and so are much more powerful as spaces for political dissent.

“Shiite don’t have that influence.”

In spite of the seemingly sectarian nature of the naturalisation programme, Marc Owen Jones pointed out a growing discontent among indigenous Sunnis at the growth of new citizens.

“A couple of good friends I have on the island of Al Muharraq are noticing a massive influx of people who have been naturalised,” he told MEE.

“They say the demographics and the dynamics of the neighbours have changed and some of them expressed feeling unnerved by this sudden change. There’s definitely some animosity among the Sunni community against the naturalisation.”

A rising resentment in the Bahraini Sunni community could also be a major factor in a diplomatic spat between Qatar and the Bahraini government.

In July, in a move that could be seen as quite ironic by opponents of the Bahraini government, Bahrain’s foreign minister publicly accused the government of Qatar of engaging in a “sectarian naturalization” programme after a spate of naturalisations of Bahrainis citizens by its Gulf neighbour.

In return, Bahrain changed its nationality law to impose harsh fines or other penalties on any Bahrainis who took citizenship of another country “whether of their own volition or through others' incitement, without securing prior permission from the relevant authorities” or if they “failed to formalise their status as per the provisions of the law.”

In what seemed a frank admission of his government’s plans, Former Qatari Justice Minister Najeeb al-Nuaimi told Doha News that “before, people had to move to Qatar, drop their Bahraini citizenship and then live in Qatar for three years before being granted Qatari citizenship, but now decisions are being made in just 24 hours.”

Though a recent case involving Salah Al Jalahma, a Bahraini who was arrested after taking Qatari citizenship, eventually resulted in his release, tension still remains high as Bahrainis continue to see afluent Qatar as an attractive respite from Bahrain's unrest.

“The average salary is around four to ten more times the Bahraini average salary," says Nabeel Rajab. "It’s a stable country with a booming economy and they don’t have many citizens so they start taking some Bahrainis.”

He pointed out, however, that the Qatar government had no interested in naturalising Shiites.

“The Bahraini government is angry about that and they say clearly 'why don’t you take the Shiites?'”

The government of Bahrain has, since the beginning of demonstrations in 2011, made noises about strengthening democratic reforms within the country.

In August, while speaking at a keynote address to the 36th Aseela International Forum in Morocco, Deputy Premier Shaikh Mohammed bin Mubarak Al Khalifa announced that his country had “already crossed the difficult phases and is determined more than ever to continue the endeavour with steady steps.”

“Exercising rule on a democratic basis is the only way to reach common goals.”

Marc Owen Jones suggested that the reconstruction of the Bahraini population in favour of a loyalist majority could be in light of a possible transition to liberal democracy.

“I think what the government are trying to do, as they try to modernise and reform by enacting democratic reforms, they want to make sure that when they do open up democratic channels they won’t be threatened by the sectarian imbalance,” he said. GCC
Bahrain and Saudi Arabia to bridge the gap between them, literally