Egypt's fear of the beard

The campaign against Islamic political movements has extended to appearance, and the beard is one of the main targets 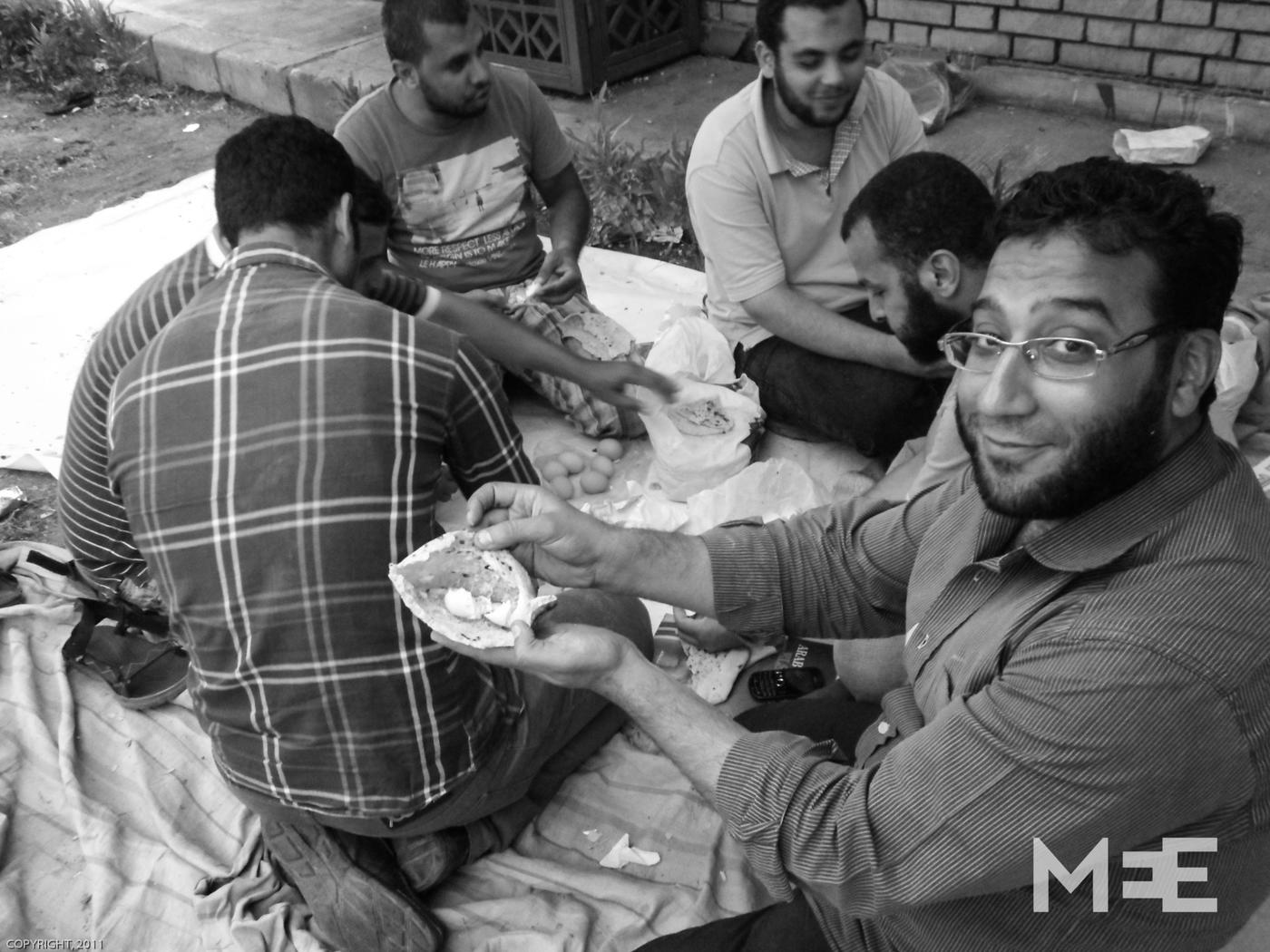 Ibrahim Abdo Ibrahim, a leading member of the Brotherhood is now a fugitive, as he was sentenced three years in absentia (MEE/Belal Darder)

Since Egyptian President Abdel Fattah al-Sisi rose to power, officially one year ago but in practice since the armed forces' declaration of 3 July, it was clear that his policy towards Islamic political movements was different from former presidents Hosni Mubarak or Anwar Sadat.

Sisi's policy is closer to that of Gamal Abdel Nasser - total and complete obliteration of Islamic movements, with a particular focus on the Muslim Brotherhood. One of the main tools to execute this policy was the use of the media - government-backed media specifically - to terrorise the Islamic political movements which seized the political initiative after the 25 January revolution.

The campaign against Islamic political movements was expanded to include a generalised crackdown on Islamic practices and outward Islamic appearance. And nothing symbolised the idea of the Islamic opposition and fear of "terrorism" more than the beard. The media emphasised the idea that bearded men were terrorists, or at least Muslim Brotherhood members.

Many lives were affected by this idea and subsequent reprisals that were taken against men who wore beards.

Abdullah Farouk Kenibar is a 22-year-old student of medicine at the University of al-Azhar in Cairo. Kenibar is from Kafr al-Shiekh governorate, but he travels to Cairo every year to study. He comes from a religious family that considers the beard as a Sunnah (religiously prescribed practice). His home in Kafr al-Shiekh is near the house of the famous Islamic preacher Abu Ishak al-Houiny, who Kenibar holds in extremely high regard.

“In my first year of high school, I used to pray al-Fajr [the morning prayer] regularly at the mosque, and every time I met Sheikh Ishak, he would tell me to grow my beard to be similar to the Prophet Mohammed,” Kenibar explained. He started to grow his beard during his third and fourth years of high school.

It was 2011 when Kenibar was enrolled in the Faculty of Medicine at al-Azhar University. Everything was going well for him. Most of the students around him were bearded, and he had no problems interacting with the people of the city. He enjoyed being treated in high esteem on and off the university campus.

But things changed three months after Morsi became president. The aggressive tone of the media escalated against Islamists with each passing day. Kenibar and his friends began to feel the growth in animosity from those around them.

“I was in the bus going to the university. An old woman carrying a heavy parcel climbed into the bus. I got up from my seat to help her, and she immediately freaked out," Kenibar told MEE.

"She started calling me bad names, saying that I was Ikhwan [a member of the Muslim Brotherhood] and that we were the reason for the sabotage of the country.”

"That was the first time I realised how bad the situation was. It was also the first time I felt that my beard was a burden on my shoulders. If I wasn’t bearded, her reaction would have been totally different.”

Six months after this incident, Morsi was removed from power, and the Muslim Brotherhood alongside other political Islamic movements called for their adherents to take part in a sit-in demonstration in two main squares. During this sit-in - which lasted for about 40 days - media attacks on Islamists reached unprecedented levels.

At this time, Kenibar was at his family home in Kafr al-Sheikh. He would have stayed there all summer, but he needed to travel back to Cairo to complete some tasks at the university. “I’d heard that bearded men were targeted along the way from Kafr al-Sheikh to Cairo, but I felt that those who told me about this were exaggerating. Though I had learned that bearded men were treated differently, I didn’t think for one minute that I would really be targeted just because I wore a beard.”

Along the way to Cairo, Kenibar’s car was stopped by a group of men. Kenibar was attacked violently under the assumption that he was “Ikhwan”, and afterwards he was taken by the gang of men to a police checkpoint, again under the assumption that he was a member of the Brotherhood heading to Cairo to participate in the sit-in. Kenibar was detained briefly for this, and would have stayed in jail if it wasn’t for the interference of his uncle, a judge, who managed to get him out after three days of detention.

When Kenibar was released, the first thing he did was shave his beard. “I hated to shave it, but I was not going to risk that danger again. I was fortunate enough to have an uncle who was a judge, but what about the hundreds and thousands who have no important relatives and were subject to the same treatement?”

Ahmed Fouad Hendawy is a 24-year-old photojournalist for Etfarag, an Egyptian news website. He has been working as a photojournalist for five years now, and has worn a beard since he was 18 years old. “I just like the way I look with a beard. I respect those who grow their beard for religious reasons, and I wish I could say that I grew my beard so God would be pleased with me, but it is simple in my case - I just like my appearance as a bearded man,” Hendawy explained.

Hendaway’s job requires him to travel all around Egypt. He spends most of his days on the street. Wearing a beard never posed a problem for him. To the contrary, he used to get positive comments about his beard and his hair, which he was growing long as well.

But then Hendaway started to face difficulties doing his job. "When Morsi became president, so much negative light was shed on the Brotherhood and the Islamists. Our society is easily influenced and led, and it started to stigmatise all bearded men as Islamists and members of the Brotherhood,” he explained.

Some people even refused to be photographed by Hendaway, simply because he was a bearded man. “It was certainly a load on me. Many times I wasn’t able to do the tasks I was appointed to do. My boss kept asking me to shave my beard, and I kept refusing. I exerted double effort to get my tasks done without shaving my beard.”

“People were passing by the checkpoint without getting stopped at all, but when I was seen, I was immediately stopped. It was clear that it was because of my long beard. Five minutes later I was ransacked, and of course the data on my camera was discovered, and I was beaten mercilessly, though I kept repeating that I am a journalist, and that I was just doing my job.”

Hendaway was led to a police station where he was detained for about a month, till the efforts of his website were fruitful, and he was released. He is now working extensively on documenting violations police forces carry out against journalists. He has also shaved his beard.

Ayman Osama is 26 years old. He currently works as a technical consultant for a multinational corporation in Cairo. Formerly a student in the faculty of computer science at the University of Ain Shams, Osama used to be a member of a Salafi group. Before he joined the group he was a typical student, who spent his time hanging out with girls and joking around with his friends. After joining the Salafi group, he became more conservative, grew his beard, and became a regular attendant at the mosque on campus. This was noticed by Egypt's National Security apparatus.

“That was before the revolution of 25 January, so the National Security was interfering in the daily lives of the students,” Osama explained. “After about a month of growing my beard, I was summoned to the National Security office, where I was questioned about those with whom I spent my time, and why exactly I was growing my beard. They threatened to report me to the police.”

Then the revolution came. National Security was expelled from the university and Osama got a job in an Egyptian company right after graduation. That was before the election of Mohamed Morsi. “It was a good job, and I did well there, and I kept working there for about a year and a half, but after Morsi was ousted, and the whole Rabaa thing, I started to notice that my colleagues were talking about me behind my back. The way they interacted with me was gradually changing. Then one day my manager called me to his office and told me that I was going to have to shave my beard. They also said that it was preferable if I left the company because they didn’t want any affiliation with those who are like me.”

Osama was shocked by the rudeness of his manager. “I’ve had heated discussions with my colleagues about politics, I knew that most of them were Sisi supporters, but I never thought that I would be treated like that, only for having different ideas, opinions and appearance,” said Osama.

Osama got a different job, one that allowed him to grow his beard. But he still shaved it, and says he will remain without a beard until the situation in Egypt gets better.

Ibrahim Abdo Ibrahim is 38 years old and a leading member of the Muslim Brotherhood. Abdo experienced detention during Mubarak's rule.

“I was detained two times during the days of Mubarak," Ibrahim told MEE.

"Both times were just before the elections of the parliament. The first time was in 2005, when was detained for about two weeks. The other time was in 2010 for three days.”

In October 2013, security forces raided Abdo’s home. This was expected to happen, because it was known that he was a member of the Brotherhood in his neighbourhood. Fortunately, Abdo was out the night the police raided his house. Since then, he has been a fugitive.

His wife took their two children and is staying with her parents. Abdo changes his location every two or three weeks, especially after he was sentenced in absentia for three years in prison for his affiliation with the Brotherhood.

“I am wanted right now, I haven't seen my family in about a year. I have to take many precautions so that I won’t be caught. But the most important one is to shave my beard. The police only suspect bearded men," he said.

"Shaving my beard has gotten me out of many difficult situations.”

Other examples of targeting the beard

Many other examples of men in Egypt being targeted because of their beards can be found on-line. In this video for instance, two young men are harassing an old man. When he tells tham that he will report them to the police they respond by saying they will say he is affiliated with "Daesh" (Islamic State). The reason for their quarrel isn't clear, but it is obvious that they are targeting his beard and at one point actually set it alight.

This video was taken during a raid at El Mansoura university. The police forces were arresting young students, one of them is bearded and a masked police officer is yanking at the beard of the student.

This video shows bearded Egyptian police officers, who were protesting against having all been suspended from their jobs, based only on their looks. Following their suspension they began a sit-in in front of the ministry of interior, to call for their rights to get back to their jobs, and were attacked by angry citizens. This was during Morsy's presidency. Diplomacy
US will not meet with visiting Muslim Brotherhood delegation