Following the arrest of his colleague Mahmoud Hussein in Egypt last month, Al Jazeera journalist Baher Mohamed talks to MEE about his detention in 2013 Al Jazeera journalist Baher Mohamed said he was surprised to hear the news about the arrest of his colleague Mahmoud Hussein in Cairo on 23 December 2016, the same month Mohamed himself was detained by Egyptian authorities more than three years ago.

“Hearing about what happened to Hussein was just a shock, a total shock,” Mohamed told MEE. “It reminded me of each and every single thing I experienced inside prison."

Hussein, 51, an Egyptian national, was stopped and interrogated for 15 hours at Cairo International Airport upon his arrival from Doha to spend his vacation with his family. He was detained the same day and security forces stormed the homes of his two brothers and arrested them as well. They were all taken to an unknown location, according to a statement issued by Al Jazeera.

On 4 January, Egyptian prosecutors extended the detention of Hussein for another 15 days, accusing him of spreading false information, fabricating press reports about Egypt, participating in a plot against state institutions, and belonging to the banned Muslim Brotherhood group. In 2013, Egypt officially listed the group as a terrorist organisation.

These accusations are not new to Mohamed, who went through a similar experience when he was held inside the Tora maximum security prison - known as Scorpion prison - for part of his detention back in 2013.

Mohamed was forced to sleep on a damp cement floor inside a small prison cell that was six-and-a-half feet wide.

There is no information about where Hussein is being held, but Mohamed says he believes he is in the notorious prison where he was once detained.

"I know he is kept in solitary confinement in Scorpion prison at the moment, I know his mind will take him to the deepest and darkest thoughts," he said.

'I know he is kept in solitary confinement in Scorpion prison at the moment, I know his mind will take him to the deepest and darkest thoughts'

Human Rights Watch (HRW) issued a report in September 2016, stating that the staff at Scorpion have severely assaulted inmates, refused to let them see lawyers and families, and kept them locked alone in cramped overcrowded cells.

Some prisoners even died because they were denied access to essential medical treatment, according to HRW.

Mohamed was arrested along with Al Jazeera English journalists Peter Greste and Mohamed Fahmy, on 29 December 2013. They were sentenced to between three and 10 years in prison on charges that included "spreading lies to help a terrorist organisation". Greste was eventually deported and the other two journalists were freed in 2015.

Security forces stormed Mohamed’s house in the middle of the night, searched it, and confiscated his equipment and money, and shot his dog Gatsby in the leg.

Mohammed learned that his wife was pregnant with their third child two weeks after he was arrested. He missed the birth of his son Haroon and by the time he was released from prison after over 400 days, Haroon was six months old.

Mohamed believes he was more privileged for being accused alongside foreign journalists in the same case, including Egyptian-Canadian Fahmy and Australian correspondent Greste. Fahmy renounced his Egyptian citizenship at the behest of Egyptian security officials who told him it was the only way he would benefit from a new law that allows foreigners to be deported during their trials.

“I was always told: ‘You should thank God you have foreigners with you.’ Now, I’m more worried because I know that Hussein is alone…he is completely by himself in this,” Mohamed said.

'I was always told: "You should thank God you have foreigners with you." Now, I’m more worried because I know that Hussein is alone … he is completely by himself in this'

Following the arrest of the Al Jazeera journalists back in 2013, rights groups and fellow journalists took part in a campaign led by Al Jazeera calling for the release of Mohamed and his colleagues using the campaign hashtag #FreeAJStaff. Journalists taped their mouths with black tape in protest against the repression of free speech.

Their arrest attracted international condemnation and wide media coverage, especially with the involvement of two foreign journalists in this case.

However, many other journalists who worked for local media organisations or as freelancers were arrested following the coup that toppled President Mohamed Morsi. Without a prominent media organisation to back them like Al Jazeera or much media coverage, they are left to face their fate alone, like freelance journalist and researcher Ismail Alexandrani.

He has been detained since December 2015 on charges of spreading false information and belonging to a terrorist organisation, largely because of his critical coverage and research on the conflict in the Sinai Peninsula between the Egyptian military and the Islamic State group.

Not alone in case

Hussein could be alone in his prison cell, but he is not the only person involved in this case. A student at the New York Film Academy, Reem Qotb, was also arrested in Cairo International Airport, a few days after Hussein’s arrest, because of alleged links to Al Jazeera.

Security sources told local media that Qotb worked for Al Jazeera and had attended “training programmes” with them in Turkey that taught her to use “small spy planes and photography devices to film events and send them to the channel in Doha," referring to a drone they found in her luggage.

The film student was detained pending investigations into accusations similar to Hussein’s, despite her family’s denial of any links between her and the Qatar-based network. In a statement on Facebook, the family said that Qotb came back to Cairo for a visit during the Eid al-Fitr holiday, before she went back to the US to complete her studies.

Both families of Hussein and Qotb refuse to speak to the press, apparently because of security concerns.

The detention of Hussein and Qotb follows the release of a documentary produced by Al Jazeera on military conscription in Egypt, entitled The Soldiers: Testimonies on Forced Military Conscription in Egypt. The documentary raised controversy and anger among circles in the Egyptian media and the social media community, which viewed it as an insult to the Egyptian army.

According to Al Jazeera, Hussein was not part of the production crew that made the documentary, and in a statement it said that he was a news producer for Al Jazeera Arabic based in its newsroom in Doha, Qatar, having joined the news organisation in 2011 as a correspondent in its Cairo office.

A couple of days after his arrest, a video of Hussein was leaked to Egyptian local media, purporting to be part of his confession to Egyptian authorities.

In the video he criticised the documentary and said that it “does not represent reality at all and it targets the Egyptian military and soldiers”.

He added that Egyptian nationals working in Al Jazeera tried to stop the release of the documentary, but their demands were ignored by the network's administration.

The video of Hussein did not come as a surprise to Mohamed, who said he knew that Hussein would be pressured into making false confessions, which is exactly what happened to him.

“I was pressured to sign a testimony of confessions on things I did not do, I was told that ‘we know how to make you sign’. At this point, I feared for my family,” Mohamed said. “I heard about the torture and abuse practised against prisoners, and I had already lived in solitary confinement for a month inside Scorpion prison and that was torture.”

“We are in a situation where the price of political conflicts between countries is paid by professional and hardworking journalists.”

Hussein's arrest was the latest move against the Qatar-based broadcaster that Egypt accuses of supporting the outlawed Muslim Brotherhood of former president Mohamed Morsi.

Mohamed, however, said that he could not see the political conflict between Egypt and Qatar as a pretext for the arrest of journalists.

“It is about journalists who are professionals and who do their work independently and critically, it has nothing to do with politics. We really love our country,” he said.

Mohamed has promised to speak out about Hussein’s case whenever he can, even showing solidarity by putting a badge on his bicycle with an image of his jailed colleague, demanding his freedom.

“I’m trying to do what was done for me when I was jailed, I’m returning the favour by helping to talk more about Hussein’s cause.” 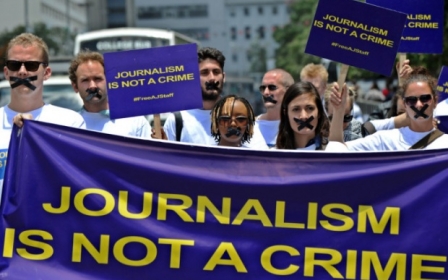