Three offensives on the Gaza Strip, in addition to Israeli bulldozers regularly razing agricultural land, has led to a decline in beekeeping 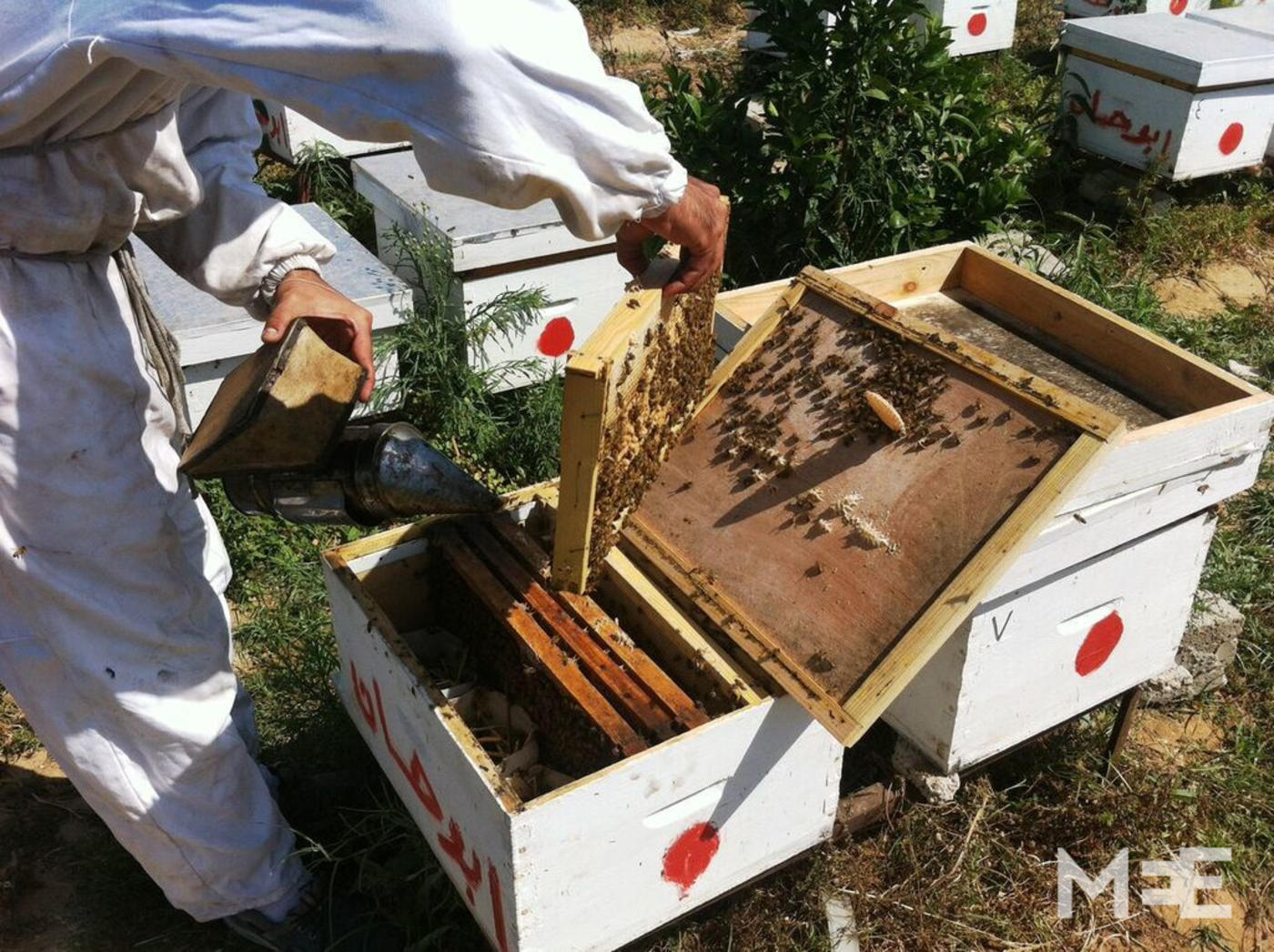 The apiary owner and his son were working with their beehives in a field not far from the eastern borders of the Gaza Strip when a nearby Israeli tank started shelling towards empty areas inside the coastal enclave.

Mohamed Ridwan did not know that it was the start of a 51-day Israeli offensive on Gaza and that one-third of his apiary would be damaged. He cut his work short that day and, with his son, fled, fearing harm.

“A number of beehives were even left open,” Ridwan said, “I did not think that it would be a long war and that it would last for 51 days. All I thought was that a wave of clashes would end within hours and then I could be able to return to the field to complete my work.”

Ridwan is 43, but with the heavily etched frown lines on his forehead and the heavy movement of his hands, he looks 10 years older. He said that he chose the location of his apiary to be adjacent to the Israeli-imposed buffer zone at the eastern borders of Gaza because of the severe shortage of trees, mainly citrus, whose blossoms need bees to make their honey, elsewhere in the Strip.

“Bees here travel inside occupied Palestine [Israel], where there are thousands of citrus trees in the settlements in the Gaza periphery,” Ridwan said. “There, they can get enough nectar needed to produce pure honey.”

Beekeepers like Ridwan face many dangers across the Gaza Strip. A specialist in the Ministry of Agriculture, Jamal Abu Swairih, told Middle East Eye that the problems encountered by beekeepers regarding blossoms and nectar push them to choose remote, oftentimes dangerous, locations for their apiaries. Many of them work near the buffer zone, where they experience regular Israeli gunfire.

“This way, bees travel several kilometres inside [Israel] and get the nectar from thousands of citrus trees,” he said. “Before 2000, there were plenty of trees in Gaza, which were enough for producing large amounts of honey, but the Israeli occupation razed thousands of those trees.”

Abu Swairih noted that the Israeli military’s razing of lands was not the only reason that caused a loss of citrus trees; another issue is the salinity of the underground water used by the Gaza farmers to irrigate their plants.

“Israeli farmers dig water wells that are very much deeper than the water wells in Gaza,” he said. “This causes the pure underground water to recede towards the Israeli side. Therefore, salty underground water from beneath the Mediterranean pours into the Palestinian wells. This kills citrus trees which grow on pure water with low salinity.”

Ratib Sammour, chief of the beekeepers syndicate in Gaza, told MEE that “before 2000, every single hive used to produce up to 30kg of honey each year, but this amount sharply declined after the severe shortage of trees because of the Israeli punitive measures against the Gaza Strip.”

Sammour also said that the three recent Israeli offensives on the Gaza Strip since 2008 “have dramatically affected the production of honey because of the severe damage caused to the apiaries”.

According to Abu Swairih: “More than 15,000 beehives were damaged just in the last summer’s offensive, most of them in the southern areas of the Gaza Strip such as the Khuzaa neighbourhood.”

The siege’s impact on bees

Before 2000, apiaries in the Gaza Strip used to produce more than 500 tonnes of pure honey each year, according to Sammour.

Abdullah and Ridwan complained of the shortage of medicines and antibiotics “urgently needed” to maintain the beehives health and prevent against bee epidemics.

Sammour confirmed that the imported Italian queen bees helped production in the past. “Italian queens incite working bees to produce more honey,” he said. “But an Italian queen must be fertilised by a male bee from a good dynasty; otherwise, there is no difference between the Italian queen and other queens.”

Beekeepers in the neighbourhood of Khuzaa, which is located to the east of the city of Khan Younis in southern Gaza, said that they alone had lost around 10,000 beehives during the most recent Israeli offensive on Gaza.

Khuzaa is one of the areas that was subjected to the most destruction during the summer offensive; hundreds of civilians were killed. Thousands of dunams of farmland, including old fruitful trees, animal and chicken barns, and beehives were destroyed.

Abdullah, whose apiary is in the east of Beit Hanoun in the northern Gaza Strip, said he lost around 30 hives during the latest offensive. He also lost dozens in the 2008/9 and 2012 offensives. “As I told you, we cannot have our hives in safer places because of the types of trees and blossoms needed for honey production,” Abdullah told MEE.

He said that he had expected to have an extra 50 to 70 hives this year, but the war and the prevalence of varroosis - a disease caused by an external parasitic mite that kills honeybees - have caused him “much unexpected losses”.

“Varroosis destroys at least 30 percent of the hives,” he added. “This is a global issue, but there are antibiotics aboard.”

Ridwan said that he and other beekeepers are trying to maintain the proliferation of Italian queens, but he said that none of their attempts have succeeded so far.

Abu Swairih and Sammour said that there have been attempts to overcome the problems facing the beekeepers in the Gaza Strip, but that they have so far been disappointed with all the attempts.

However, Sammour said that he is working on a “fogger” for the sterilisation of beehives. “This would prevent bee epidemics up to 70 percent,” he said. “If this machine succeeded, this would be a breakthrough in the beekeeping sector.”

Like many other goods, honey is still a rare commodity in the Gaza Strip. All of the honey produced in Gaza does not remain on the shelves for more than a month.

Gaza traders used to import Egyptian honey to fulfil the needs of Palestinians in Gaza, but now, after the destruction of almost all of the smuggling tunnels under the Egypt-Gaza border, Egyptian honey has disappeared from shelves.

Gaza beekeepers start collecting honey in April and finish in May. Each beehive currently produces up to 10kg of honey. One kilogram of honey is worth $15, and the demand is still high. 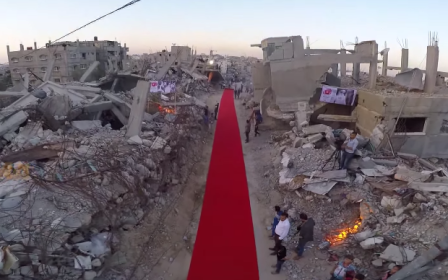 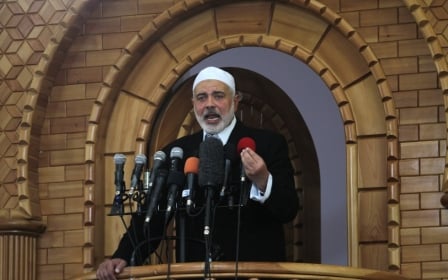