For the third year Palestine’s marathon has called on runners from the West Bank, Gaza and abroad to take ownership of Article 13 of the UN’s Human Rights Charter: the right to movement 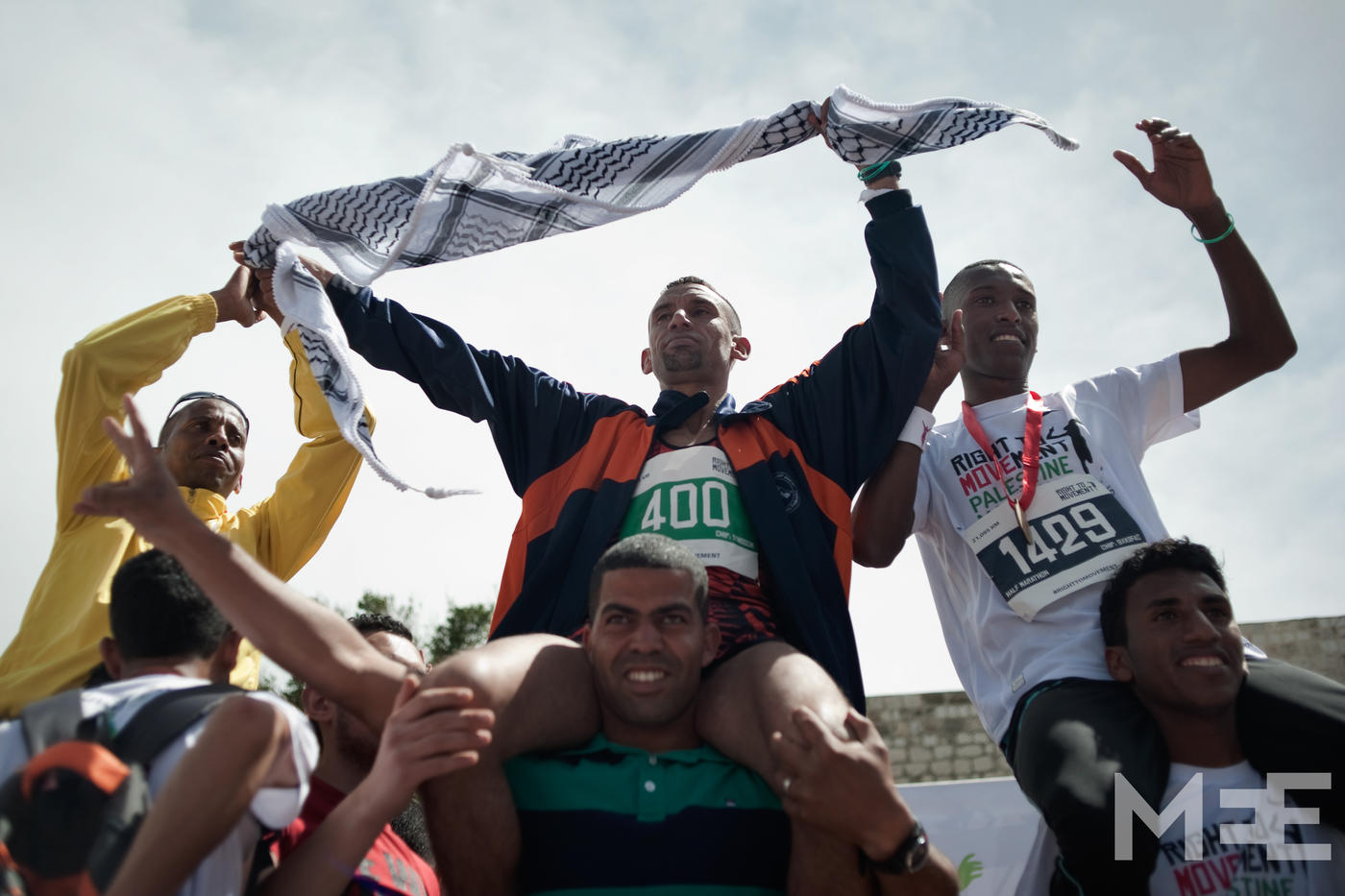 BETHLEHEM, West Bank - It’s 7am and the sun is still coming up over the Church of the Nativity in Bethlehem. Over 3000 runners clad in neon are doing jumping jacks while Katy Perry hits blare from speakers around Manger Square.

Minutes before the starting gun of the Palestine Marathon, several hundred balloons are released from the stage in front of the Church of the Nativity, then a flock of white doves. An Israeli F-16 roars overhead.

If the atmosphere at the starting line is anything to go by, the Palestine Marathon is above all a celebration. But, for three consecutive years, the marathon has also been a call to Palestinian and international runners to take ownership of Article 13 of the UN’s Charter of Human Rights: the right to movement.

“Wherever you go in Palestine, you face a checkpoint and a crazy Israeli soldier preventing people from moving,” General Jabril Rajub, Minister of Sports and Youth in Palestine told MEE minutes after the starting gun. “This marathon sends a peaceful, non-violent message to the international community about Palestine’s suffering. And it shows Palestinians that they are not alone, that they have the support of the international community. I believe the impact of this event is huge.”

More than 3,000 runners from over 50 countries congregated in Bethlehem to sweat through either 10, 21, or, all 42 kilometres of the Palestine Marathon. Upwards of 700 runners travelled from abroad to participate.

Mia, who is half Palestinian but born in Denmark, told Middle East Eye before the race, “I felt I just had to be here.” Her Danish running partner, Stephanie, said the marathon was an important combination of two life-long passions, “running and supporting the Palestinian cause.”

Kimberly Young, from Boston in the United States, ran 10k, even though she, “doesn’t like running”. She was in Bethlehem she said, “to bring attention to the realities of movement restriction in Palestine, and why it takes so long to get everywhere.” Kimberly told MEE that, “being able to participate in an event that could bring global attention to the realities of the occupation would get me out of bed to run.”

Under midday sun and in 20-degrees heat, Nadar al-Masry from Gaza crossed the finish line two hours and 57 minutes later.

The marathon’s Danish founders worried that last summer’s war in Gaza would deter international runners from traveling to Bethlehem. With reports and pictures of last summer’s war in Gaza reaching all corners of the globe, “no one was signing up,” marathon co-founder Laerke Hein told MEE. Organisers said they had resigned to cobble together even minimal numbers, “seeing how many we could bring at all.”

Their fears proved to be unfounded. More runners participated this year than last. Even though the number of runners has grown year on year, Laerke said, the point of the marathon isn’t just about attracting as many to Bethlehem as possible. “The numbers aren’t the point. We’re focusing on convincing more people to run the half and full marathons.”

The marathon’s route is, according to organisers, “A showcase of the different sides of Palestinian everyday life.” Almost all landmarks in Bethlehem - famous - and infamous - feature on route, including the Church of the Nativity and Manger Square, Aida refugee camp, and the graffiti-daubed, eight-metre tall, concrete separation barrier.

When organisers initially sat down to map the marathon’s path, they struggled to find a full 42k in Area A, which is the 18 percent of the West Bank under full Palestinian Authority control. “We scoured maps for a 42k stretch,” says George Zeidan, a marathon organiser from Bethlehem. Eventually, George remembers, organisers calculated that, “by taking every turn on every street, we were able to find 10 kilometres.”

“It’s impossible to find a route under full Palestinian authority in Bethlehem that doesn’t go through Aida refugee camp,” promises George, “or along the separation barrier, or through Al-Hadr village, which routinely is threatened with further land confiscations.”

Instead of blaming organisers for having to run four repetitive laps, George hopes full-marathon runners will “discover the real reason behind the route for themselves.” Laerke dismisses the idea the route is a curated political portrait of Bethlehem. She says even if they wanted to, “we couldn’t make another route. There is no other route.”

With less than 48 hours until the starting horn, 48 Gazan runners were in limbo, waiting for Israeli authorities to issue their travel permits to the West Bank. It came down to the wire, but their joint application to travel to Bethlehem was issued in the early hours on Thursday morning, the day before the marathon. For many among the Gazan cohort, this would be their first visit to the West Bank.

Even though he competed for his country at the Beijing 2008 Olympics, Palestine’s most celebrated marathon runner Nader Al-Masri from Gaza had never run a marathon in his own country before. Before the race, Danish organisers confided to MEE, “we hope he will win.” Not only did Al-Masri win, Gazans were placed first, second and third in the 10K race.

“We’ve been working for two years to get Gazans to the marathon,” says George Ziedan, “but Israeli authorities have always denied permits.”

Organisers lobbied all channels at their disposal this year, including the Palestinian Olympic Committee, Israeli NGO, Geisha, and the UN. “It was a mess,” say Laerke, who can only speculate why the permits came through this, and not previous years. She wonders whether the Israeli authority’s decision to allow Gazans to run in the West Bank this year “might just have been about avoiding bad press.”

Laerke and marathon organisers are admittedly flummoxed by this phenomenon. “There are a lot women at the front of this organisation, and I think it makes a difference that we, the founders, are women too.” Etidel Ismail of the Palestinian Olympic Committee and Bethlehem’s mayor Vera Baboun - both women - are among the marathon’s most prominent faces.

“If it was only men here,” says Laerke looking around Bethlem’s Peace Centre, which is marathon HQ, “maybe there would be fewer fathers here, bringing their daughters to sign up.”

“There are three women on the bus from Gaza,” said George, evidently elated, the day before the marathon. “This is the most exciting thing for me actually.” Hamas prevented women from running the UN’s Gaza marathon planned for 2009. The event was eventually cancelled. George describes their participation in Bethlehem as “a symbolic victory.”

Security was handled by the Palestinian Authority, who “talk to Israeli Defence Forces, of course,” says Laerke. The Palestinian Red Crescent Society was onsite and prepared for any and all medical eventualities. The marathon wouldn’t have been possible without its 450 volunteers, including Bethlehem’s local scouting troop.

Improvements over last year’s marathon include closing both lanes of traffic for runners on Bethlehem’s roads - “if they can close down all of Manhattan in New York,” says Laerke, “then we can probably close Bethlehem’s roads” - and adding portapotties along the route.

Where it depended on international sponsorship in previous years, the 2015 Palestine Marathon was an exclusively Palestinian-sponsored event. This, suggests Laerke, is emblematic of how the marathon is increasingly becoming a Palestinian-led initiative with Danish cofounders taking a secondary role.

“This is the first year we don’t have sponsorship from Denmark,” said Laerke, “This year we have support from Jawal, Bank of Palestine and NBC. It’s a big thing. It’s an indicator of how ownership of the marathon is being transferred from us, its Danish founders, to the running community in Palestine.”

The evening before Palestine’s inaugural marathon, cofounders Signe Fischer and Laerke made, what they openly say, was one of the most difficult decisions of their lives. They called the handful of Israelis who had registered to run the next day, to ask that they not participate. It’s been a point of contention among the marathon’s organisers since. Should organisers allow Israelis to run?

“Under Israeli law,” says George, “Israelis are not allowed to come to Bethlehem. That’s the obvious answer to this question. But if they’re running for peace and for solidarity, we’d love to see them here.”

This year - as opposed to previous years - “everyone is welcome,” says Laerke, “we’re not making a big deal out of it.” But 24 hours before the marathon began, and the handful of Israel that had signed up to run hadn’t registered in Bethlehem. The point, says Laerke, is “we’re not going to be the ones telling anyone they can’t run. That’s not us.” 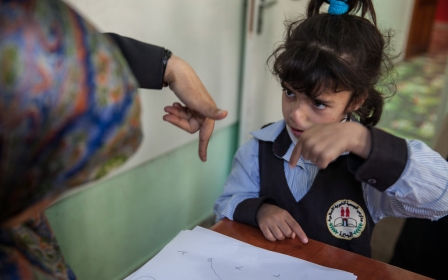 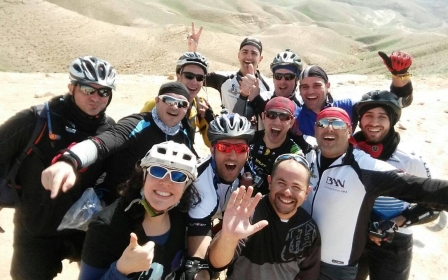 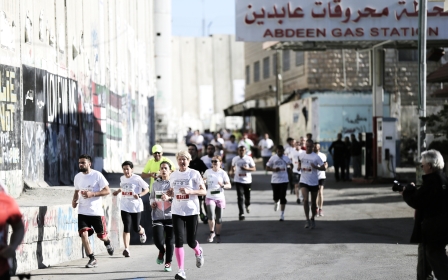 Occupation
Running for rights and resistance