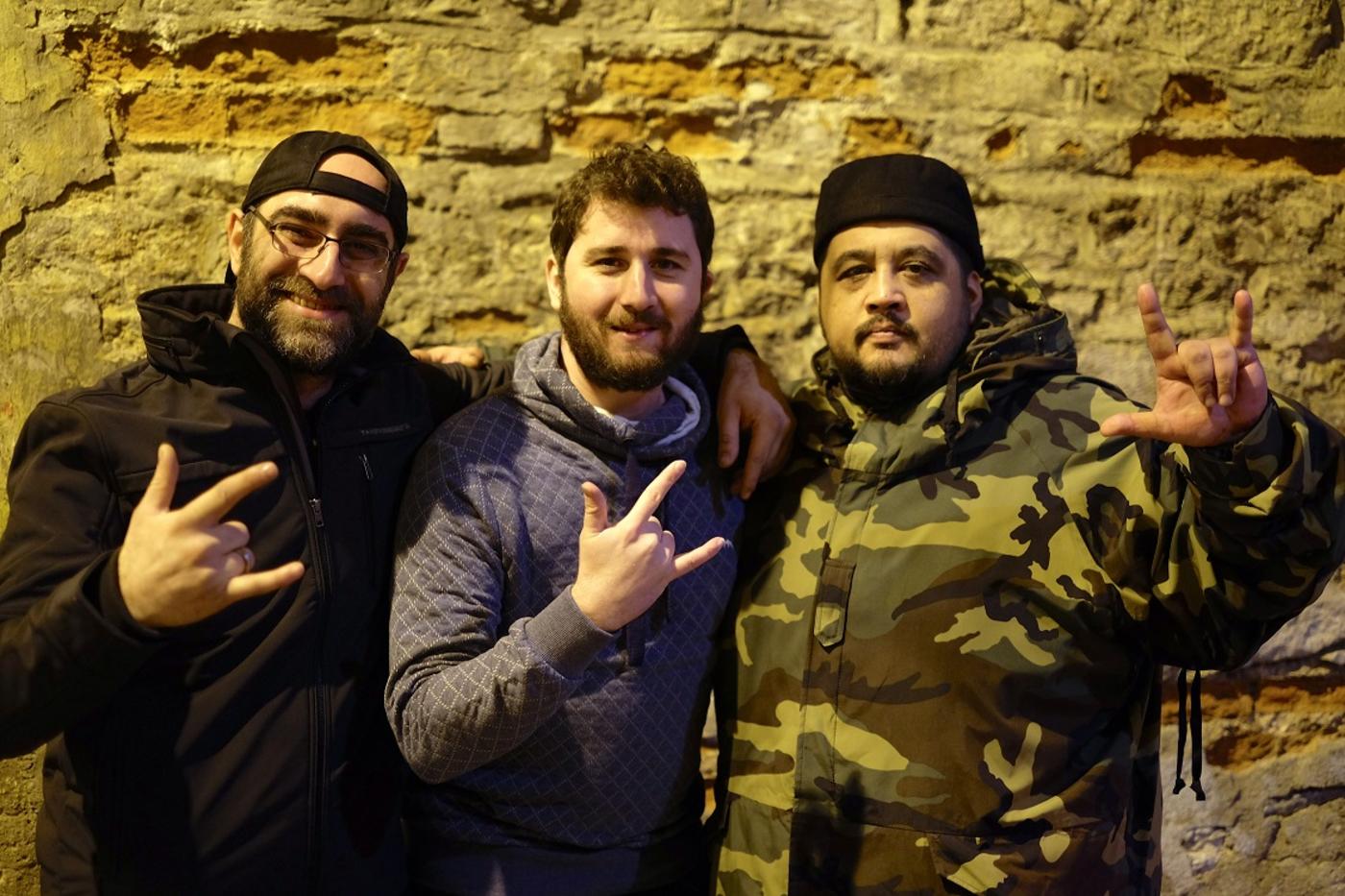 They realised that rap generates a full-bodied rhythmic experience that transcends the senses, while hand signals and signs are themselves a cornerstone of rap videos and hip hop culture.

A marriage of the two has previously led to amazing results on numerous occasions, such as the live Kendrick Lamar performance featuring a certified American Sign Language (ASL) instructor signing out the raunchy lyrics with ease while shaking it onstage in 2013.

Ergin and Dilbaz are taking things up a notch. Aiming to mould a new genre around the concept of sign-language hip hop, the two men, alongside a team of collaborators, have formed the group Eller Konuşur, which means "hands speak" in Turkish. They are putting together a performative hip hop configuration that hearing-impaired people can enjoy.

Outside a cafe in Istanbul's central Beyoglu district, MEE met with Dilbaz and Oguzhan Mete, a 29-year-old hearing-impaired graphic designer. They arrived early to our meeting, no small feat in Istanbul, where it is quite common to be late.

Moments later Ergin arrived around the corner of a dimly lit back street, casting an imposing figure with his heavyset build, camouflage jacket, combat hat and baggy cargo pants.

Known more commonly to his fans simply as Fuat, the 44-year-old rapper of Turkish origins was born and raised in Berlin, the early epicentre of Turkish rap, which flourished among immigrant communities.

Ergin eventually moved to Istanbul in 2004, where he began to achieve major success in Turkey. His intense, blistering delivery is sharp and aggressive, his appearance formidable. But in person the rapper is genuine and engaging, with a youthful, affable demeanour.

The group consists of a crew of six more, including a videographer and a dance instructor. They have completed their first song and are working on new ones. A basic approach they have pursued thus far consists of Ergin rapping together with Mete, who signs the lyrics in tandem.

“I liked rap when I was a kid because of the movements,” Mete said, who has twinkling blue eyes and a contagious smile. He lost his hearing as an infant following a nasty fever. He has partially regained it with the help of a device, but verbal communication remains difficult.

“We are going to release a DVD with a video for each track. Visuals are very important,” said Ergin, who talks with a compelling, animated voice.

“Generally, projects launched for disabled people are awareness projects. People say 'look what we did' and then they abandon it. This project has to be sustainable, and we are doing it so people all over the world follow suit,” said the 34-year-old Dilbaz, who sports a backwards baseball cap, a trimmed, greying beard and speaks with clear conviction.

The project was first conceived in 2009 and subsequently shelved for financial reasons, but Fuat has been thinking of the idea since he saw a video of the American group Ed O.G. and Da Bulldogs in the early 90s that had a guy in the corner of the screen signing.

“We had no money,” Dilbaz said. “Eventually we invested money we earned from our own work.”

The group has not received any outside funding, according to Dilbaz. The project is moving forward full speed ahead, and the group is about to move into an office they recently rented.

Their potential reach is large, as an estimated 3.5 million people are hearing-impaired in Turkey, around 4.7 percent of the country's population.

A main goal of the group is to expand communication among a disadvantaged group limited by the confines of Turkish Sign Language.

“There are only 2800 words. That's not very many,” Dilbaz said. A Turkish Sign Language dictionary published in 2015 contained signs for 2607 words only.

“When I went and spoke with a sign language association and said 2800, they said 'no, only around 200 are actually used'. There are those who get by only knowing 30-40 and who can't read,” Ergin said.

This is among the things they aspire to change, by adding new vocabulary to sign language through their lyrics.

“What is important is their world, what they want to express. I'm translating that into rhymes,” Ergin said.

'What is important is their world, what they want to express. I'm translating that into rhymes'

Ergin works on his lyrics with Mete and they tweak them together to make them more suitable for sign language.

“Sign language is actually very easy to learn, it's very logical and you can learn the signs very quickly. In terms of making [hearing-impaired] people feel like they are a part of this society, it's a step that one can take,” Ergin said. He and Dilbaz are both learning and they are committed to injecting emotion into sign language that is often absent in Turkey.

“You're watching a talk show, and next to the host there is someone signing, but there is no emotion, no feeling,” Ergin lamented. Ergin and Mete use the movement of their bodies and their facial expressions to translate their emotions to their fans.

“Their world is beautiful too. I went to a club, and there were hearing-impaired people dancing. When you can't hear, your other senses become sharper,” he added.

'Their world is beautiful too. I went to a club, and there were hearing-impaired people dancing. When you can't hear, your other senses become sharper'

For Mete, rediscovering rap years later after enjoying it as child was a pleasant coincidence. He has hearing-impaired friends who also want to get involved in the collaboration.

“We want to take this all over the world,” Dilbaz said, adding that they wanted to inspire more people to get on stage and start rapping.

“I've given many concerts and released a number of albums. But when I looked around I realised there is much more to be done. I want to bring things to a new level,” Ergin said.