'To have humour you have to have hope': Palestinian funny man Sayed Kashua 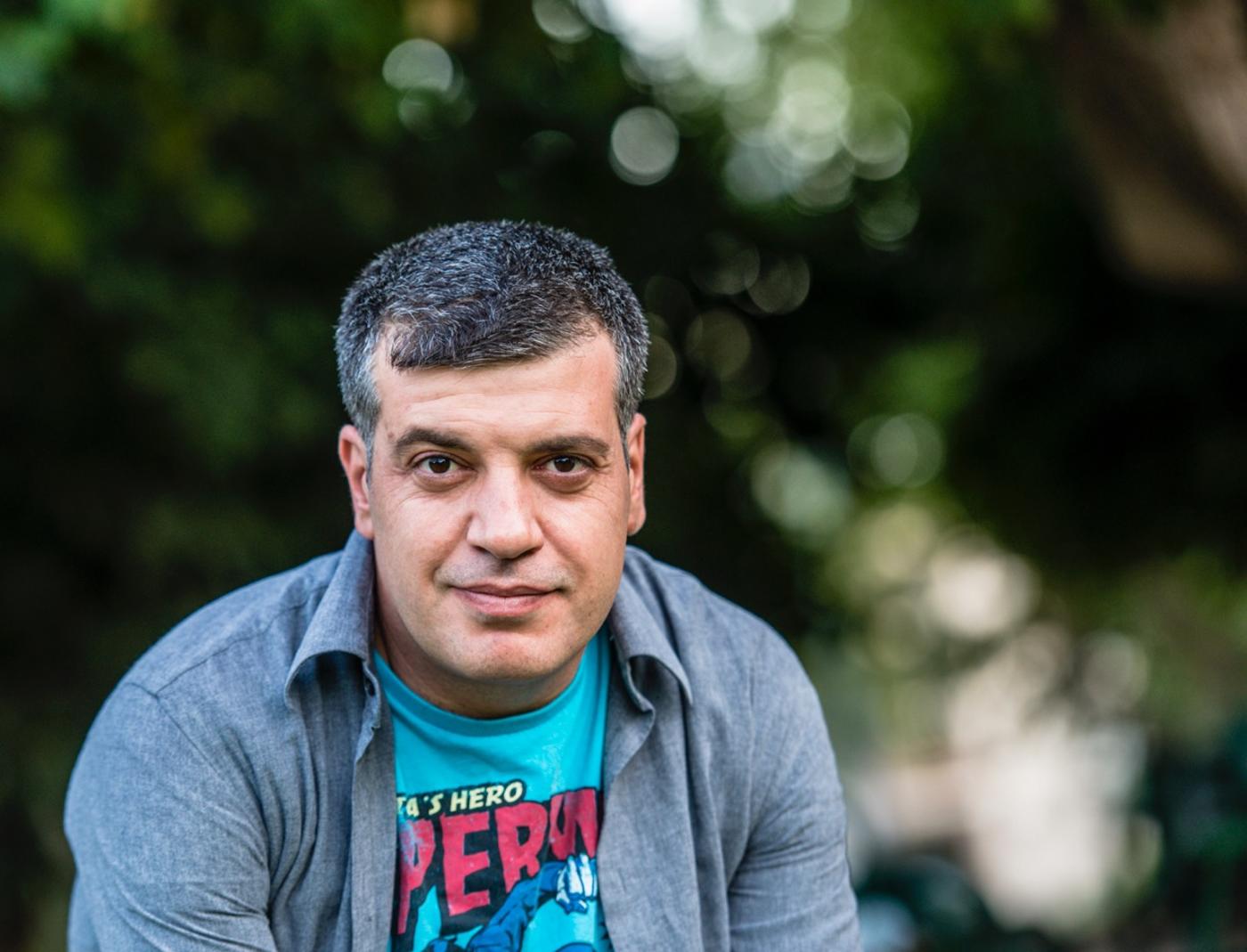 After a year living in America, Sayed Kashua's youngest son recently mistook a falafel sandwich for a “taco” (Photo courtesy of Karl Gabor)
By
Sarah Aziza

It has been more than a year since Palestinian writer Sayed Kashua relocated from Jerusalem to Urbana-Champaign, a small college town in southern Illinois that Kashua describes as “nice but flat, very flat”.

While the Midwestern suburb is far from the “death to Arabs” marches that erupted in Jerusalem on the eve of Kashua’s 2014 departure, it is clear that the writer has not found peace of mind. He speaks with a tumbling, equivocal eloquence, his eyes restless and penetrating. “I’m still recovering,” he says, “leaving Israel was not a free choice. I think about Jerusalem every morning when I wake up. I’m still there.”

In some ways, his departure was a predictable climax after decades of growing frustration. For years, Kashua has used his novels, essays, and hit television show to address Israeli society with humour and political critique. “Kashua’s writing is moving, and often funny, but also deeply unsettling,” says Gianpaolo Baiocchi, director of New York University’s Urban Democracy Lab and one of the many English-language readers who have come to admire Kashua’s work.

Baiocchi hosted the Palestinian writer in Manhattan last week, where Kashua gave a reading from his newest book, Native: Dispatches from an Israeli-Palestinian Life. The book features a selection of Kashua’s columns, which he has written weekly for the Israeli paper Haaretz since 2006. Baiocchi describes the collection as a “cultural ethnography of everyday racism”.

Israeli professor Iddo Tavory reflected on the power of Kashua’s stark but powerful prose during a roundtable discussion in New York City. “There is a core of neuroticism in his writing,” Tavory noted, “and this disease comes from the author’s knowledge that at any moment he can be made to feel like an outsider.” Tavory says Kashua’s early novel, Dancing Arabs, - which was later turned into a film - left a deep impression on him, exposing him to new insights about Palestinians and “shocking [him] into new ways of thinking about Israeli society.” For Tavory, Kashua’s work resonates outside the Israeli context for “anyone who knows the experience of being unwelcome”.

Inside Israel, Kashua’s work has been controversial among Palestinians and Jews alike. For some, Kashua’s partial assimilation into Jewish society was seen as political compromise, while Zionists resented his testimonies of anti-Arab discrimination.

While Kashua often made light of these detractors in his satirical essays, he admits there were times that the opposition was hurtful. “The most painful was dealing with anger from my own community,” says Kashua. “They didn’t always understand me, or why I didn’t just take a straightforward political stance.” Rather than touting party slogans, Kashua’s work is narrative, nuanced, and often politically ambiguous.

Kashua also drew fire from Arabs for his decision to write exclusively in Hebrew. While his first language is Arabic, Kashua attended a Jewish boarding school in Jerusalem as part of a pilot programme to incorporate “gifted Arabs”.

Arriving as an eighth-grader from the small northern town of Tira as one of only two Arabs in the academy, Kashua was immersed in the Hebrew language. At the time, he spoke “very poorly,” and felt isolated from his Jewish peers. “My first friends were the Arabs who cleaned the grounds,” he recalled. “It was very hard.”

When his parents made it clear that returning to Tira was not an option, Kashua devoted himself to mastering the Hebrew language, and along the way gained his first introduction to “Western” literature. While some Arabs see Hebrew as the “language of the oppressor,” for Kashua, it is the language in which he read his first novel and discovered a passion for the written word. “The first library I ever saw was in Jerusalem. It was unbelievable to me. I read and read.”

Kashua became well-versed in major Hebrew writers, and in the course of his voracious reading, noticed the absence of Arabs in the dominant narrative. As Kashua recalls in an essay entitled “Farewell,” “I began to write in Hebrew, believing that all I had to do to change things would be to write the other side, to tell the stories that I heard from my grandmother… I wanted to tell the Israelis a story, the Palestinian story. [I thought] surely when they read it they will understand... one day we will turn into equal citizens, almost like the Jews.”

In 2004, Kashua, then an emerging novelist, was offered a new platform for his storytelling when Israeli producer Danny Paran approached him about creating a television show. The prospect of writing a primetime, commercial programme portraying Arabs was almost unheard of in Israel at the time, and came as a shock to Kashua. “At the time, there was usually less than an hour a week of Arabic programming in Israel,” says Kashua. Eventually, he agreed to the project, hoping to introduce Israeli audiences to Arab characters who “weren’t criminals or terrorists”.

It was not until 2007 that the first episode of Kashua’s sitcom, Arab Labor, aired on Israeli television, and the debut was met with a mixture of praise and controversy.

The show centres on Amjad, a hapless Arab journalist who aspires to assimilate into the Ashkenazi Jewish middle class. Amjad’s misadventures often implicate Jewish-Israeli society, portraying subtle and overt racism in scenes that are comical and incriminating in turn. At the same time, the show addresses the complexity and dysfunction of life in Arab communities. For this reason, Kashua faced sharp criticism from his fellow Arabs who accused him of reinforcing negative images of Palestinians.

While he acknowledges that he employed stereotypes as part of his satire, Kashua says, “When you have nothing to lose, stereotypes are a place to begin. It was a way of getting people to laugh and feel uncomfortable at the same time.” Kashua built his characters slowly from there, strategically balancing parody with more clearly political themes. “In one episode I brought up the Nakba,” he says, “But not until the second season. We had to earn that episode.”

Many of Amjad’s experiences are drawn from Kashua’s own life. Living in a predominantly Jewish neighbourhood in Jerusalem, Kashua strove constantly to attain acceptability in the eyes of his neighbours, posturing himself after Ashkenazi culture. Yet, like Amjad, Kashua found it impossible to outstrip the structural racism that confronted him at every turn, whether in the form of humiliating security searches or hostile hotel receptionists. Even so, Kashua is open about his own ethical dilemmas, writing about the powerful but problematic impulse to hide his Arab identity in certain contexts. “I have to calculate every word, every gesture,” he says, “and it’s exhausting.”

Most painful for Kashua was watching his children awaken to the reality of their own second-class position in Israel. In one of his columns, Kashua describes witnessing his young son being ridiculed for speaking Arabic. “I will never forget the look that passed across my son's face. It was a look that gave me the chills... a look that passed rapidly from a smile to stunned gaze, affront, and finally accusation. A look I heard telling me, ‘Why did you lie to me, why didn’t you do something, it’s all your fault.” Kashua is struck by the futility of his efforts to assimilate, reflecting, “I cheated [my children] when I surrounded them with protective hothouses of mixed kindergartens and pleasant neighbourhoods.”

Despite repeated setbacks, Kashua continued to write for years, clinging to the hope that he could affect positive change through literature and culture. Yet, in the end, Kashua says he saw Israeli society growing more polarised, not less. In 2014, as violence escalated in Gaza and his Jerusalem neighbourhood, he wrote: “[I spent] 25 years of writing and knowing bitter criticism from both sides, but last week I gave up. Last week something inside me broke. When Jewish youth parade through the city shouting “Death to the Arabs”... I understood that I lost my little war.”

Kashua and his wife decided to move up their plans to take a sabbatical in the United States. “I couldn’t take another day,” he says, “I had to get my family out of that place.” Within days, Kashua, his wife, and three children landed in Chicago’s O’Hare Airport, bound for the cornfields of Urbana.

Over a year later, Kashua says his children are adjusting well to their new life in Illinois. “They like their schools and they’re making friends,” he says.

Despite the overall welcome they have received, Kashua admits some moments have left him puzzled. When Kashua learned from a teacher that one of his sons had taken to leaving class along with other Muslim students to pray, he was stunned. “That’s not a practice he learned at home,” said Kashua, “but the assumption seems to be, you stick with your kind.” Even so, says Kashua, his children have been quick to pick up American culture - his youngest son recently mistook a falafel sandwich for a “taco”.

If it was concern for his family that made Kashua take the leap to leave Israel, it will ultimately be the same concern that determines his future steps. Already, Kashua has stayed longer in the United States than he had originally planned, and he speaks openly about the possibility of settling here permanently, or “at least until the kids grow up”. Shortly after arriving in Illinois, Kashua saw images of his children’s former school being burned and vandalised by anti-Arab protesters.

Despite his bitter disappointment at recent events, Kashua cannot let go of Jerusalem completely. “I still carry an Israeli passport,” he says, “I check the Israeli news before the American news each morning.” Still, Kashua admits he is not sure what the words “identity” or “home” mean to him. “For now, I guess, home is Urbana, because that’s where my wife and kids are, and I miss them when we’re apart.”

One of the hardest losses for Kashua lately has been the waning of his legendary sense of humour. He recalls former years, when he had hoped to instigate change by inciting laughter, before decades of disappointment eroded his will. Kashua continues to dispatch a column to Haaretz every week, but says it is a struggle to have anything to say. When he does write, it is with less comedy and more equivocation.

The change was not a deliberate one. “To have humour,” says Kashua, “you have to have hope.” 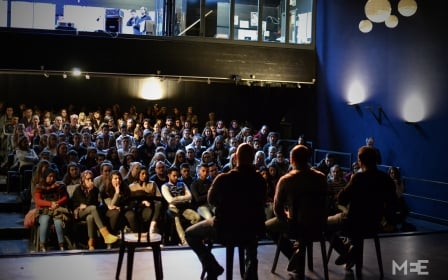 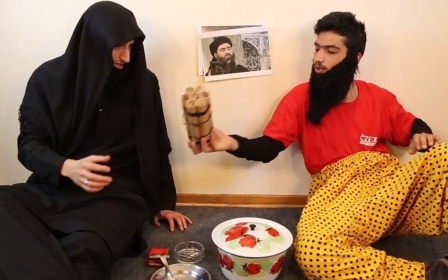 Islamic State
A Daesh fighter walks into a bar: Twitterati use humour to combat IS