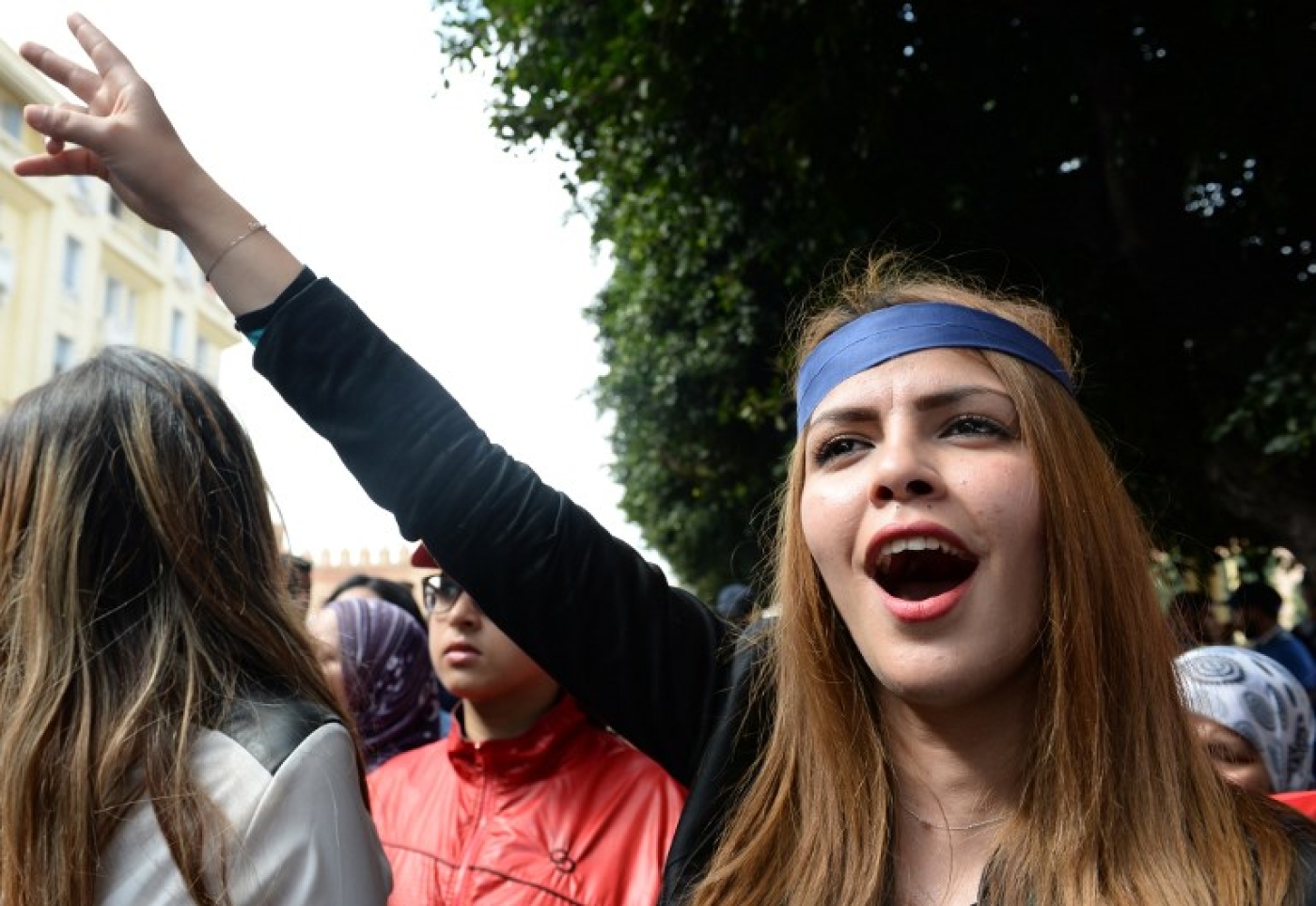 CASABLANCA, Morocco - Book bag in tow, Wissale Elhaial, 20, pins her eyes straight ahead as she strides past cafes where men congregate in Casablanca’s downtown area.

Vendors entice customers to their halal stands; some call out for her, but not to tempt her with the spiced aroma of falafel.

“Come here! I would just like to talk to you!”

Elhaial tries to ignore them, but finds herself glaring, and says she sometimes wishes she wore a headscarf, though she doesn’t really think it would make much difference.

Elhaial is not alone. According to a national survey conducted in 2009 by the state-run Moroccan High Commission for Planning, 40 percent of women between the ages of 18 and 64 reported an act of violence in public spaces during the duration of the study.

One in three women said they endured psychological abuse, defined as “any act of dominating or isolating a woman, humiliating her or making her feel uncomfortable”, according to the survey.

Sexual harassment is a universal issue but it is particularly problematic in Morocco. The US State Department cites under safety concerns for travellers going to Morocco, “aggressive panhandling, pickpocketing, purse-snatching, theft from unoccupied vehicles and harassment of women are the most frequently reported issues".

While the country has made advances in recent years in terms of granting more rights to women, sexist behaviours and lack of legal protection are still issues for feminist advocates.

“Some Moroccans think men harass you because you’re wearing something attractive,” Elhaial said, sipping her steamy cup of mint tea from inside a cafe.

“When I’m in the street, I’ve seen Muslim women wearing scarves and djellaba (a loose-fitting robe), and men still open their mouths.”

After many years of political negotiations, the kingdom passed a law on violence against women in February. The symbolism of the legislation cannot be ignored, but the bill has disappointed many actors in civil society.

It criminalises certain forms of domestic violence, and provides new protections, including new provisions on the marriage of minors. It also contains measures against sexual harassment at work and via emails and text messages.

#Morocco passes law on violence against women which will help some women, but authorities should address gaps to ensure that all survivors are protected from abuse, and police and prosecutors do their jobs @hrw https://t.co/qU9USEoKAJ pic.twitter.com/aHfKElDRli

But women’s advocates say the law doesn’t go far enough in defining sexual harassment and fails to give police, prosecutors and judges any guidance on how to handle sexual violence cases.

The law does provide for jail time of one to six months and a fine between 2,000 and 10,000 MAD ($211 to $1,054) for anyone convicted of sexual harassment in a public space. But Moroccan women say they’re reluctant to file charges in such matters.

That’s because when it comes to public spaces, men in Morocco are raised to think they must constantly assert their masculinity, according to Stephanie Willman Bordat, a founding partner at Mobilising for Rights Associates (MRA) in Rabat. Bordat has worked for more than 17 years with NGOs, women’s advocacy groups and legal teams to promote women’s rights throughout Morocco.

“Men feel entitled to women’s bodies and the performance culture here says they have to verbally express that or else not be manly,” said Bordat. “[The laws] aren’t applied because they weren’t written to be applied. It’s a cosmetic law that’s hard to enforce because of limited police power and strict evidence requirements.”

Many victims of sexual violence do not feel that the country’s judicial institutions will do much for them.

“If there’s a guy who won’t stop talking to you and you go to the police about it, they take it as a joke and won’t consider your case,” explained Fatima El Naciri, 21, a friend of Elhaial.

El Naciri said even dressed in her headscarf and high-collared, long-sleeved blouse with jeans, she could be harassed, especially in rural and conservative areas of the country.

If I were to get harassed or assaulted, people might say: ‘You were wearing jeans. You shouldn’t be wearing that in the streets and you gave them permission to harass you’

“The victim herself is seen as the problem,” El Naciri said. “If I were to get harassed or assaulted, people might say: ‘You were wearing jeans. You shouldn’t be wearing that in the streets and you gave them permission to harass you.’”

A “culture of impunity”, where perpetrators are protected instead of punished, exists in Morocco, according to Samia Errazzouki, a Moroccan-American journalist and doctoral student in north African studies who speaks publicly about abuses against Moroccan women.

As a regular writer about women’s rights in north Africa, she vocally critiques the atmosphere in which these cases are handled, one that she says is fuelled by failures to fully implement the law and to shift the weight of guilt from victim to perpetrator.

“There’s a huge discrepancy between what’s written on paper and what’s practised,” Errazzouki said. “If a woman isn’t able to file a police report without being turned away by officers or being discouraged by family who fear public attention, then the laws don’t matter.”

The case of Saad Lamjarred

Women’s advocates point to the case of Saad Lamjarred, a successful Moroccan pop singer, who was arrested in Paris in October 2016 and faces charges of sexual assault against a French woman. Still, those serious charges haven’t put off many of the pop star’s devoted fans.

“Here he is, actually charged, and one of the first things we hear from the Moroccan government is that the king is paying the bills for his legal team,” said Errazzouki. “These people are able to buy their way out of having to face any consequences.”

Furthermore, Lamjarred’s accuser was forced into hiding after being physically threatened by the singer’s fans.

Recent cases of violence against women have, however, received a lot of attention in Morocco.

Last March in Rabat, a sexual assault of a teenage girl in the street by two men was filmed and circulated on Facebook, causing outrage among Moroccans. As one of the perpetrators tried to remove her clothes while the other one filmed, she is heard asking them, “Don’t you have a sister?”

Last summer, a disturbing video of four boys between the ages of 15 and 17 violating a 24-year-old mentally ill girl aboard a public bus in Casablanca by tearing her clothes off and insulting her also went viral on Facebook. The boys were arrested and charged.

The weaknesses of the law and the conservatism of the institutions have motivated feminists to find creative ways to fight back.

'Go to the youth first'

In August, one day after the filmed assault of the girl on board the bus in Casablanca, the feminist illustrator Zainab Fasiki published a widely shared drawing on Instagram of a distraught woman with exposed breasts and torn clothing. The caption: “Buses are made to transport people, not to rape girls.”

On 25 February, the young activist invited 20 girls interested in drawing to meet and create comics illustrating ways to stop street harassment. This was the first session for her Women Power Collective project.

In March, Nidal Azhary, president of L'Union Feministe Libre, launched the first mobile app in Morocco, via which women can report instances of harassment or assault, available on Google Play in Darija Arabic. The French version of the app is called Machoufouch after a Moroccan catcall that means “Can we see you?”

Users can anonymously file a report and provide information about the location, the nature of what happened and descriptions of the victim and aggressor. They can even get advice about legal proceedings.

These initiatives are designed to build public awareness and understanding about the impact of sexual harassment in Morocco. But the toughest task for the anti-harassment advocates may be changing the mentality of men in Morocco.

“If you want to change something, you have to go to the youth first,” Elhaial said. “Moroccan men are used to this habit and think harassing girls proves they are men. Women need to speak up and not keep silent.”

Olivia Lewis spent several months in Morocco on a SIT Study Abroad programme and produced this story in association with Round Earth Media. Environment
Paradise lost: Why Morocco's Akchour is a victim of its own success