Hidden in plain sight: Life as a mixed-Lebanese

The Mixed Feelings exhibition, a multi-media project supported by the Heinrich Boell Foundation Middle East Office, shines a light on Lebanese citizens of mixed-race and the challenges they face 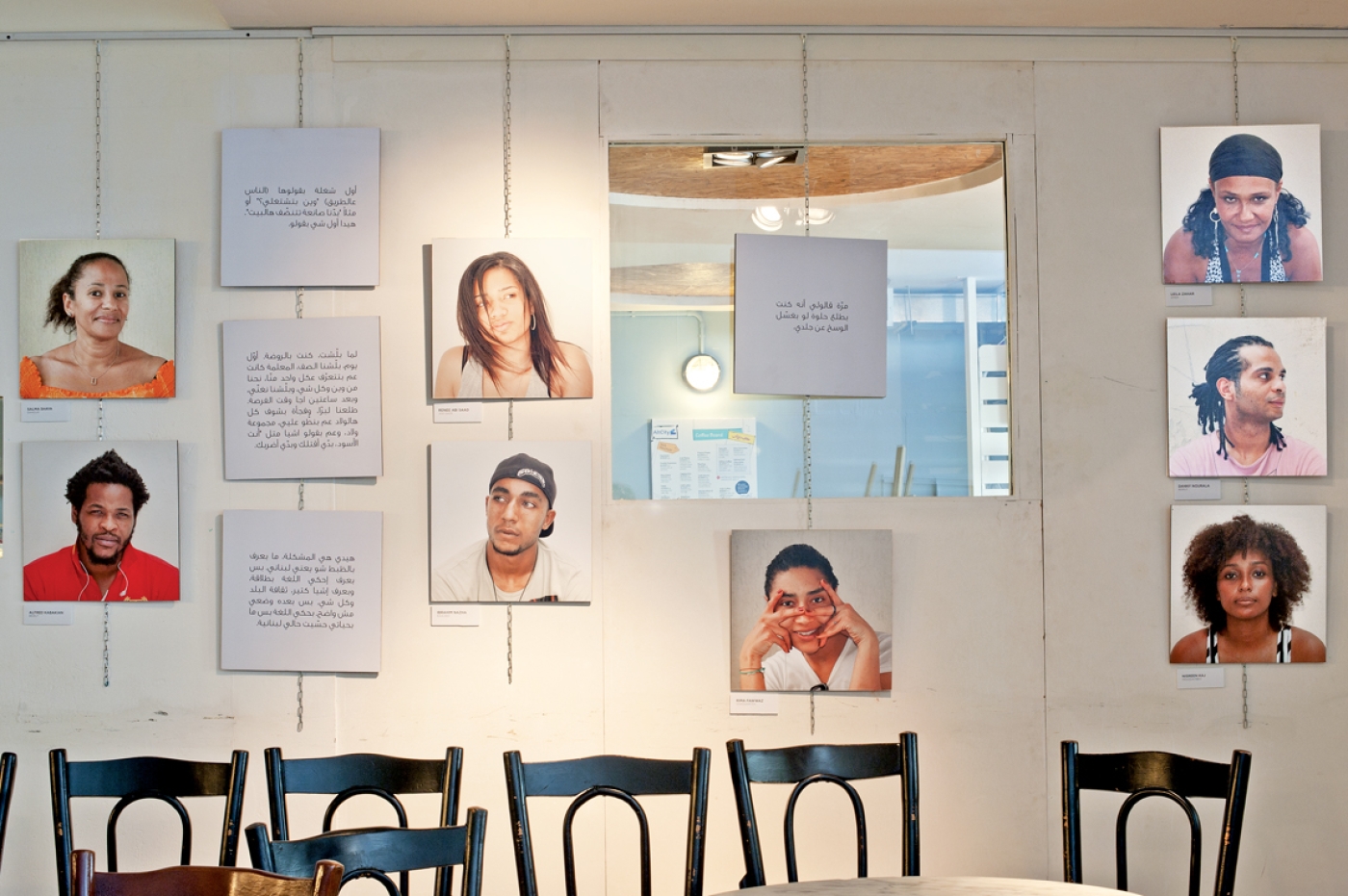 Faded and yellowed with age, the family pictures on the wall were like any you would find in a Lebanese home. The garish shirts and pouffed-up hairstyles spoke of the 90s, with the adults arranged around a plump, scarlet sofa. The grandmother looked on protectively over the gathering, her son, sporting a bushy black moustache, pride of place in the centre, smiling nephews and nieces at his feet. Perched beside him, on the chair's round arm, sat a Filipino woman, her jet black hair and soft, rounded features a stark contrast to the Arab faces around her. With foreign maids a normal addition to many Lebanese households, a Filipino face in the picture was no surprise. But far from being an awkward addition to a touching family moment, she was holding the hand of the man on the sofa. She was his wife. Born Filipino, she is now Lebanese.

Mixed-race populations are a face of life in many countries today, but in Lebanon they are still an anomaly - one hidden in plain-sight. For decades the country's sons (and some daughters) have left their homeland in search of fortune across the African continent, forging businesses and careers abroad before returning to Lebanon. Now Lebanon is home to hundreds of thousands of migrant workers, toiling in factories or in homes. At home and abroad, marriages between Lebanese and foreigners have long been an inevitability. And now such unions are parent to a small community of mixed-race Lebanese. Card-carrying citizens of the cedar state, their global ancestry is often marked in the colour of their skin.

But while black and asian faces on the streets of Lebanon are common enough, little thought is paid to the idea that some could be Lebanese.

The family portrait was part of the Mixed Feelings exhibition, a multi-media project shining a light on Lebanese citizens of mixed-race and the challenges they face in a society where everyday belonging is often determined by the colour of your skin. The work of Nisreen Kaj, an activist and mixed-race Lebanese citizen herself, and Marta Bogdanska, a Polish photographer, Mixed Feelings has sought to provoke thought amongst Lebanese about how the country views itself and those within it.

The project's first installment, a gallery of portraits of mixed-Lebanese, toured the country in 2014. The second part of the team's research displayed family photos and archive material from the community. Kaj said that one of the primary goals of Mixed Feelings, which was supported by the Heinrich Boell Foundation MEO [Middle East Office], was to open people's eyes to the existence of mixed-race Lebanese. "People say they've never seen a mixed-Lebanese, yes they have, they just don't know who we are or they just assume that we can't be [Lebanese]."

"People are visual," she continued, "and they always use this argument of we look and we don't see." Bogdanska agreed, "You never hear, 'you don't sound Lebanese' unless it's your accent but in this case all of those in the project speak perfect Lebanese Arabic."

These are attitudes that Fadi Saab and his family face every day. Born in Congo to a Lebanese father and African mother and now married to Zed, an Ethiopian, he met when she came to Beirut to work as a maid, his three young children are possibly the most mixed in Lebanon. Nearing 40, his broad smile and cheery temperament embodies the best of Lebanese hospitality. As we sit in his flat in Beirut's eastern suburbs eating dish after dish of his wife's fiery Ethiopian cooking, he speaks fondly of the warm welcome he received when he settled in Lebanon in 1998.

But if he felt accepted into the fold at first, that soon changed. After finishing his studies he was called up for a year of compulsory military service. "My worst experiences in Lebanon were with the army," he recounted with disbelief, "it was disgusting". In an institution that it was hoped would build unity following the brutal civil war, Saab's right to be in uniform was constantly called into question.

Saab said his officers always treated him with respect and were often happy to chat in French, the language he was brought up speaking in Congo. But with his fellow soldiers, his experience couldn't have been more different. "There were provocations all the time, insulting me. Some people had a nickname for me, 'zifit' ['tar'], like the road. They'd say to each other, how can a dark be in the Lebanese army with us? It's impossible. How could his father marry a black woman?'"

Even now, Saab says he runs a daily gauntlet of such questions from compatriots shocked at his citizenship. "It's painful, painful. Because if you go somewhere and people don't know you, that 'this is Fadi, he's Lebanese,' they always have a different way of approaching you, a different behaviour."

17 years after moving to Lebanon, Saab no longer feels at home here. It's a feeling common to mixed-Lebanese families. Since they first started photographing the community, Kaj and Bogdanska say that the vast majority have already left the country. "I'm living in my own country like it's not my country. I feel like a foreigner," Saab said. "I'm worried," he sighed, "I wish for my kids to leave."

From their interviews during the Mixed Feelings project, Kaj and Bogdanska said that everyone seemed to have their own definition of what it means to be Lebanese, unveiling many of the stereotypes that the exhibition was trying to combat.

However, every mixed-Lebanese I spoke to had stories of their fellow countrymen assuming they were migrant workers. For Kaj, being mistaken for a domestic maid on the street or in taxis is a regular occurrence, one that she has resigned herself to. Asked how he responds to being treated differently to other Lebanese, Saab explained that he used to get very angry. "Now I understand it's not their fault. They have a superiority complex. Automatically they think they're above me because I'm dark."

While it would be wrong to brand all Lebanese as racist, mixed-race Lebanese face an uphill struggle to be seen for more than the colour of their skin. While migrant workers in the country are viewed as expendable commodities, both by society and the state, little will change.

But the injustice exposed by Mixed Feelings is by no means limited to race. Looking around the exhibition, something is missing. In every picture or album of a mixed-Lebanese family, the black or Asian faces are never male. Lebanon's familial law is patriarchal in the extreme. Citizenship can only be passed from a father to his children, a law that ensures that any in every mixed-Lebanese family, the mother is always foreign-born. Ironically the state relies on them to raise Lebanon's next generation.

One and the same

For the women behind the project, racism in Lebanon is an "elephant in the room," one which they were keen to help Lebanese become more comfortable discussing. "We entered the project with a simple idea - to broaden the idea of Lebanese-ship," Bogdanska said. But encouraging viewers to consider issues of belonging themselves was paramount, " People are visual, we want them to draw that relationship and question on their own," she added.

Lebanon has long been held up as a nation with a unique diversity of religions. But even though its population is nearly all Arab, Kaj rejected the notion that it is an ethnically homogeneous country. "Again you get the discussion of who belongs and who doesn't in the country. If you accept that every person is part and parcel of what makes Lebanon then it's very diverse."

"Because [migrant workers] aren't seen as part of Lebanon, then the country is quite homogenous. But only because you've chosen it to be so."

You can't choose your family

For Kaj, family, as the core unit of most Middle Eastern institutions from religion to politics, was an obvious next step for Mixed Feelings, and was the focus of their second exhibition, displaying historical photos of mixed-Lebanese families. "It was interesting to see how sameness and otherness are negotiated within the family unit," she said.

"We tried to show specific themes through daily life that people can associate with just to show their normal lives," Bogdanska explained, "some of the families' outing are more Lebanese than you could imagine."

But far from the family just being a source of ideas of otherness in Lebanon, in a society crisscrossed by divisions, it is also a solution to the problems of non-belonging. "On an individual basis," Bogdanska explained, “We have a lot of examples of people being able to cope with [otherness] within a small family unit - they find ways to deal with it," even in a country notably lacking in anti-racism laws. While many Lebanese husbands had a hard time assuaging their relatives' concerns about them marrying foreigners, the arrival of their first child typically resolved any tensions. The families that Kaj and Bogdanska got to know were ultimately a source of hope for the future. "People in Lebanon tend to find ways to deal with things and the family is a good way to see these coping mechanisms and how we can use them on a broader scale," Kaj added.

Home is where the heart's at

Saab has little hope that attitudes will change in Lebanon. But even if many in society are not of the same opinion, in the law and in his own mind, he is resolute, "I have a family here and I am Lebanese," he told me. "If I say it's not my home I would be surrendering. I don't want someone else telling me different." Pointing to his three children playing on the floor by his feet, he only had this to say, "I will always fight for them to be Lebanese."