Plate by plate and guest by guest, a boutique hotel and its creative cuisine is helping to bring Bethlehem’s tourism back to life 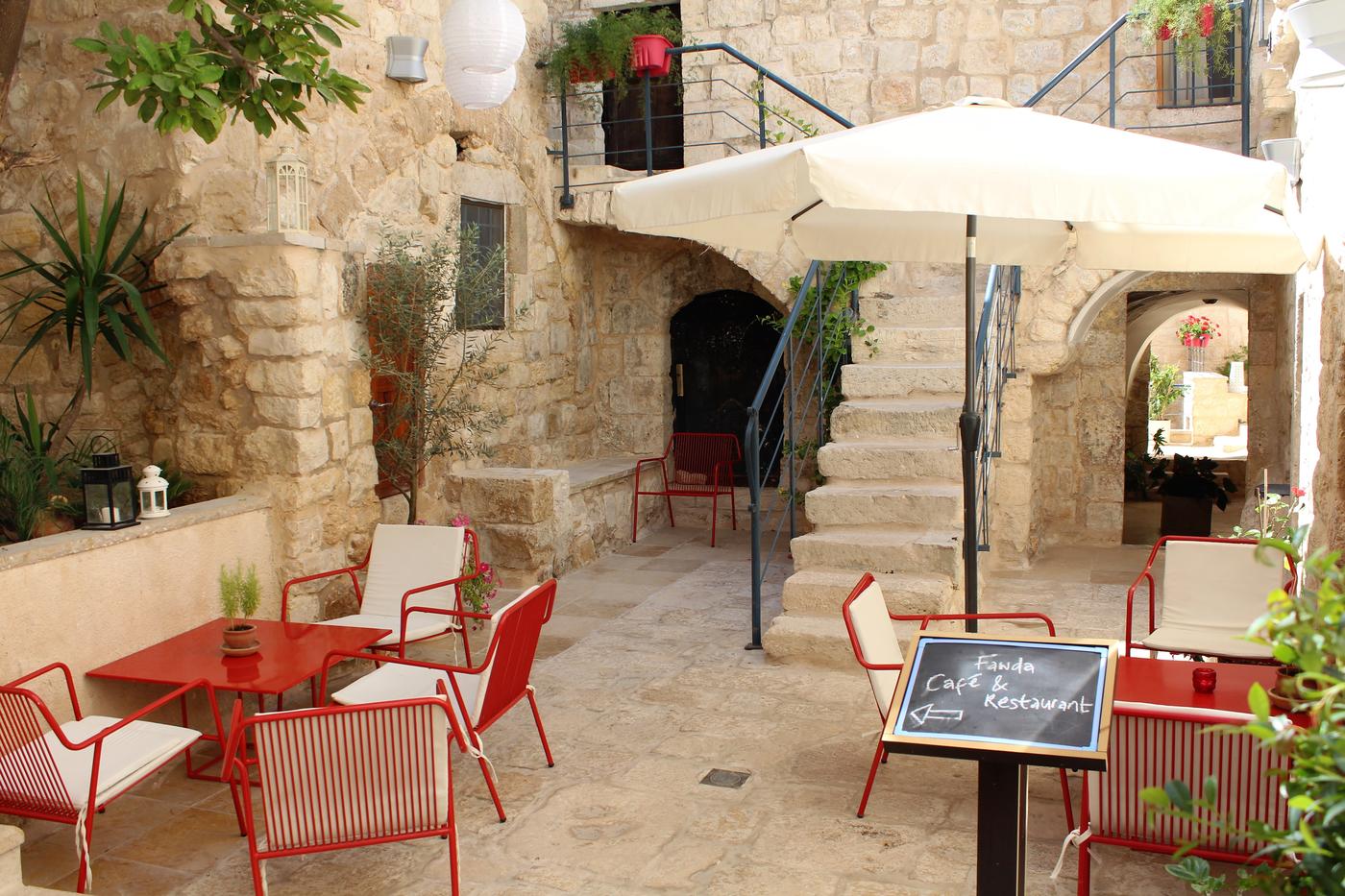 The Fawda Restaurant and Cafe is central to the renovated Hosh al-Syrian guesthouse, which dates back 400 years (MEE/Mary Pelletier)
By
Mary Pelletier

BETHLEHEM, Palestine - Away from the bustle of Old Bethlehem’s main thoroughfare, chef Fadi Kattan spreads his cooking tools on the prep table in his tiny kitchen.

“Do you know where I got these,” he asks, taking a pair of long, fine scissors in his hand, while his assistant Mohammed Masalmeh grabs a large blowtorch. “I use medical equipment because in Palestine you can’t find tongs or scissors that are small enough for designing intricate plates of culinary cuisine. In a European kitchen, you’ll have a blowtorch, but this we had to buy in the builders' store, and they couldn’t understand why we are using it.”

Hunting down cooking utensils is just one challenge Kattan has faced while setting up the Hosh al-Syrian guesthouse, and its Fawda Cafe and Restaurant. They opened at the end of 2015, just a short walk from Bethlehem’s number one tourist stop – the Nativity Church. They intend to offer something different and unexpected to visitors and locals alike. But Kattan's project is just part of the municipality’s wider initiative to reinvigorate tourism, which has suffered for years as a result of the ongoing Palestinian-Israeli conflict.

A new stop on the old pilgrimage trail

Manger Street, the road that runs through the centre of Old Bethlehem, is buzzing with cars, vendors and shops, but venture beyond that main road, and the streets are quiet, their shops shuttered. This is especially true of Star Street, which in 2012 was named a UNESCO World Heritage Site as part of the pilgrimage route to the Church of the Nativity in Manger Square.

The Hosh al-Syrian guesthouse lies between Manger Street and Star Street, hidden down a winding alley that, like much of Bethlehem, is decorated with star-shaped Christmas lights. The guesthouse provides a concierge service so guests are met on arrival in Manger Square. But today, Kattan is conducting a tour of the surroundings.

“Star Street is the old entrance way to Bethlehem city and it is rich in history,” he says, gesturing down a quiet street. “Until the late 1970s and in the late 1980s, Star Street was a thriving area of Bethlehem and now, a few minutes away from the guesthouse, if you look left and right, there’s nobody there.”

Kattan knows these streets well. He grew up in Bethlehem and his grandfather made a home just off Star Street. Fifteen years ago, Kattan returned to Palestine, having studied hospitality and the culinary arts in Paris and gaining experience by working under various top chefs in England and France. After working for Palestine’s Ministry of Tourism for three years, he saw the guesthouse as an opportunity to affect his country's tourism industry in a more direct and personal way.

“We’re called a guesthouse but in reality we’re a boutique hotel,” Kattan says, once back at home on the guesthouse patio, with the Muslim call to prayer and church bells peppering the conversation. “We’re trying to do something different. Thirty years ago, pilgrims who used to come to Palestine would spend their whole lives putting money to the side to make that once in a lifetime trip to Jerusalem and Bethlehem, and that’s just not true any more.”

“We’re attracting a totally different clientele,” he says. “Since we opened, 30 percent of my clients are gay, the majority of my clients are individual travellers, so they’re not pilgrims, they are on more of a cultural trip and, funnily enough, a lot of them, other than seeing the church and the separation wall for its graffiti, spend most of their time at the guesthouse.”

It is easy to see why guests linger – the 11 rooms are part of an elegantly refurbished 400-year-old private residence centred around the outdoor garden and cafe. The renovation was a combined effort by the Bethlehem Municipality, the Palestinian Ministry of Tourism, the Centre for Cultural Heritage Preservation and the Consulate General of Italy in Jerusalem. Kattan applied to manage the space and was appointed. Eight months on and the Bethlehem Municipality has not been disappointed.

"The Hosh al-Syrian project was initiated by the Bethlehem Municipality as part of a strategy to regenerate tourism in the heart of the Old City and more particularly around Star Street,” Bethlehem mayor Vera Baboun says. “Fadi Kattan managed to develop the concept first designed by the Municipality, to revitalise the historic Hosh al-Syrian and take it to the level of creativity in both the comfort and design of the rooms as well as in the kitchen.”

'We’re going to learn together'

Such creativity in the kitchen is something new for Palestinian hospitality, an area Kattan says has been marred by the low expectations that go along with pilgrimage tourism. Food and accommodation in Bethlehem is often basic and accustomed to a quick turnover, but the Fawda restaurant is encouraging a new sort of dining experience.

Diners at the restaurant must book in advance and Kattan gets to know his customers quickly in order to create a menu that he thinks they will enjoy. The reason? Fawda only serves a set menu, dictated by the fresh produce and meat on offer from Bethlehem’s central market.

From working with his local butcher to ensure his meat is aged to perfection, and staying in regular contact with his baker who supplies him with extra-small traditional taboon breads, Kattan says that his motto is: "We’re going to learn together.” In addition to a variety of family inspired cooking techniques, he also draws on his international experience, as well as from such places as Japan, India and France, and using it to spin traditional Palestinian products into new dishes.

“There is a perpetual tendency to limit Palestinian cuisine to the traditional,” Kattan says, clearly frustrated at the restrictions of his nation's cooking. “All cuisines have modified, have moved, they’ve had chefs who create, and Palestinian cuisine has to stay in these totally stone-engraved recipes. It’s not true, and I use techniques to work with Palestinian produce and try to adapt things differently.”

Muna Hawa, who works at the restaurant, helped prepare a watermelon granita - a Sicilian-inspired iced palette cleanser - that Kattan often serves between courses. She had no experience in hospitality before beginning work at Fawda, but she is learning fast.

“It’s different here,” she says. “I’ve seen different things here and learned a lot from Fadi. When a plate goes out, I’m very happy and proud because it looks nice, it’s well organised.”

Revitalising an industry while under occupation

From the roof terrace of Hosh al-Syrian, the Israeli settlement of Har Homa forms part of the view. Deemed illegal under international law, the settlement, as well as the separation wall that cuts off Bethlehem from Jerusalem and the checkpoints around the city, contribute to the difficulties faced by the hospitality industry.

“That’s part of the difficulty in sourcing products here,” Kattan says. “I’ll give you an example -  we get raisins from a little village called Beit Skaria, and Beit Skaria is a village that is surrounded by a lot of the main Israeli settlements south of Bethlehem. Therefore access to the farmer is very difficult - it depends on whether there is an open checkpoint or a closed checkpoint. The reality is always very difficult because you’re challenged with the accessibility of things and with getting things in.”

Despite the trouble sourcing certain products and travel warnings for Bethlehem, Kattan remains optimistic that Hosh al-Syrian and Fawda will keep growing. Thanks to social media and events held at the guesthouse, the rooms and restaurant are drawing tourists from both Israel and Palestine.

Vera Baboun, too, sees Hosh al-Syrian as an inspiration: “We [the Municipality] hope that the nascent success of the Hosh al-Syrian guesthouse and Fawda Cafe and Restaurant will encourage more young entrepreneurs from Bethlehem to invest in the Old City,” she says.

One plate a time, and guest by guest, Kattan's creative hospitality is helping bring Bethlehem’s tourism back to life. 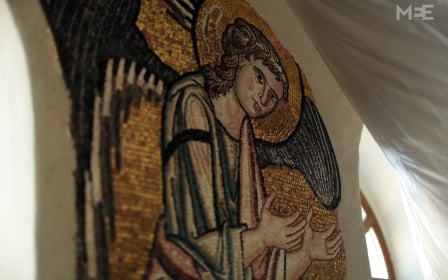