Undocumented, a new online mini-series, follows three Syrian characters on a journey of self discovery 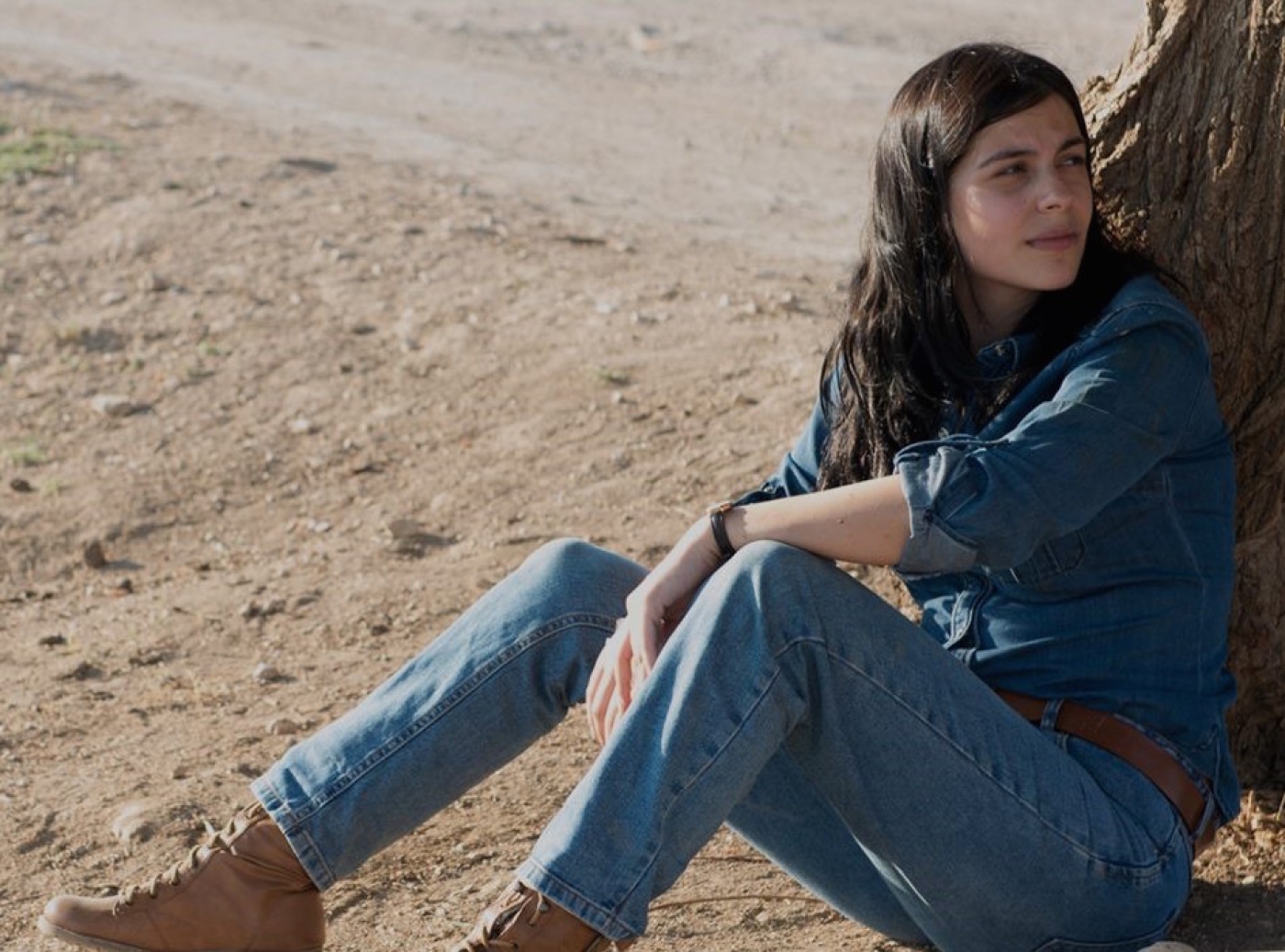 In Undocumented, Abeer Hariri plays Reem Salameh from Daraa, Syria, an engineer feeling the oppression of living in a patriarchal society (Photo courtesy of Elias Moubarak)
By
Omar al-Muqdad

The online drama mini-series Undocumented is a hopeful story of new beginnings and challenges facing Syrians during the civil war, specifically designed for social media and internet viewing.

Though there have been many Arab and Syrian shows produced for web viewing in the form of talk shows or comedies, Undocumented is one of the first interactive drama series online.

The drama, which was filmed in a few months, includes 29 short episodes that last from around two to five minutes each.

Vewers can leave behind the logistically limiting world of television screens and watch the Syrian drama on smartphones, laptops and tablets. Having a stable internet connection is the only prerequisite to watching it at any chosen time.

Written by Wahbi, with contributions from Lebanese writer Bassem Breish and director Amin Dora, who is also Lebanese, the project was produced in collaboration with the Lebanese production company Spring Entertainment, and was directed by Dora.

The series tells three separate stand-alone stories, with different characters as the main protagonists. The main characters come together in the finale where their lives are seemingly linked. Viewers have the freedom to choose which character to follow and in which order.

In one story, a principled police officer named Wafik, played by Wahbi, refuses an order from high-ranking officials to tamper with official documents with terrible consequences. To teach him a lesson, they target his only son.

The second story centres on a young man named Karim, played by Syrian actor Yanal Mansour, who is asked to become an informant when he is arrested for his relationship with a political activist, forcing him to flee.

In the third story, an engineer from Daraa gets fired from her job for investigating land desertification in her town, after discovering that powerful men including her uncle are cutting water supplies to poor farmers.

In choosing very "human" heroes for all of the three stories, Wahbi avoided being dragged into partisan politics or affiliations to any particular political groups.

Since being aired on YouTube and Facebook last month, the series has gained popularity and critical acclaim. Undocumented has English subtitles, and according to Wahbi, it may soon be available in other languages such as German.

Before 2011, Syria was known as one of the Arab world's main centres for television drama production, with popular series watched by millions from Lebanon to the Gulf.

Wahbi has worked in the TV and film industry for 20 years. Yet when the Syrian civil war broke out in 2011, the industry became rife with divisions.

Every time I wrote a script, I was attacked from both sides, the regime and the opposition

“Every time I wrote a script, I was attacked from both sides, the regime and the opposition,” says Wahbi.

When Gulf entertainment industry leaders stopped purchasing Syrian drama because their governments had cut ties with President Bashar al-Assad, Syrian production houses lost their biggest clients, thus turning a once stable livelihood into a barely visible one that was getting hit by huge losses.

According to Wahbi, Syrian drama became another channel for political rivals to force their opinions on TV shows and it became very hard to produce content and get funding for projects.  As a result, there was an exodus of writers, actors, and producers looking to work in safer countries, such as Lebanon. So Wahbi decided to take his work online.

According to Wahbi, those from the industry who have remained in Syria are subject to censorship, and mostly toe the official line of the government.

“At some point, I was thinking about looking for a whole new career due to the war in Syria. It became very hard to keep my balance in this environment," says the 44-year-old Syrian drama star and director.

Wahbi left Syria in early 2014 and went to Beirut, before eventually moving to Madrid.

He first began to experiment with the digital format two years ago with a series called We’ll Be Right Back. In addition to writing the script, Wahbi starred in the project produced by MBC TV which was adapted from the Italian film Stanno tutti bene (Everybody's Fine). According to critics, the series dealing with everyday life in modern Arab society succeeded in attracting many viewers from around the Arab world.

Even though the 33-episode show was mainly produced for television, it was also accessible on the MBC TV website and their YouTube channel.

Yanal Mansour, a young and enthusiastic 29-year-old actor, expressed excitement about his role in Undocumented.

For the past three years, Mansour, who lives in Damascus, has not accepted any acting roles in Syrian drama.

I was thinking about looking for a whole new career due to the war in Syria. It became very hard to keep my balance in this environment

“I felt that the Syrian drama that was available was not on an acceptable level of seriousness, [regarding] the tragic events in the country, so I quit working,” Mansour tells MEE on a call from Damascus.

Mansour studied acting at the Higher Institute for Dramatic Arts in Damascus and graduated in 2012. He has taken part in several projects on TV, cinema, and stage.

At one point, Mansour moved to Lebanon for a while and worked as a theatre acting trainer for refugee children.

“I felt that this was the best kind of help that I could give, passing on my acting capabilities to these children, and it was an enjoyable experience for both me and them,” Mansour says.

While in Lebanon, he heard about Undocumented through friends working in the media and did not hesitate to go to the audition.

According to Mansour, the strength of the cast was beyond what he had expected.

“I felt so much respect and appreciation for my work and gained experience from everyone on the set,” he says.

“The story itself and the production in general was exactly what I had been looking for the whole time I was out of a job,” Mansour adds. “This work was perfectly consistent with my conviction in the art of acting and how exactly it should be,” Mansour concludes.

Reem Salameh, the engineer, is played by Abeer Hariri, a 30-year-old Syrian actress, singer and filmmaker who has a degree in English literature from Damascus University and another in acting from the Higher Institute for Dramatic Arts. She knew she had found something worthwhile when she read the script.

From the moment I read the script, I knew that the project was very special and authentic

“From the moment I read the script, I knew that the project was very special and authentic," Harriri said from Cairo, where she is currently studying singing at the Academy of Arts.

“I started my career at the age of 17 and ever since then I have participated in several plays, TV dramas, and films in Syria, Lebanon, Egypt and other countries in the MENA region,” says Hariri.

In her role as Reem, Hariri says it was a remarkable experience, yet there were some challenges that she had to overcome.

“It brought out the best in me, as a Syrian and an actress. Playing this character was challenging because the performance had to be sincere, especially because the story is handling a highly sensitive and emotional subject,” she says.

Wahbi believes in the importance of developing projects that bring the reality of the Syrian tragedy to Arabs and Syrian viewers in particular.

“It can provide viewers with a realistic scenario that has been denied by many producers, all of whom want a superficial drama that beautifies a harsh reality. Basically they only want to sell fiction that will make them more money and attract a larger audience.

“Drama is a very important tool to reflect the real situation on the ground,” he says. 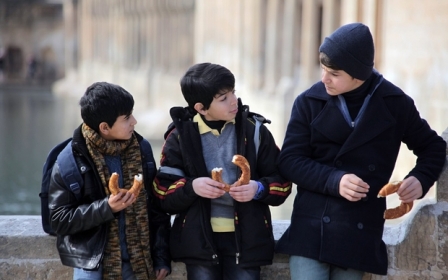 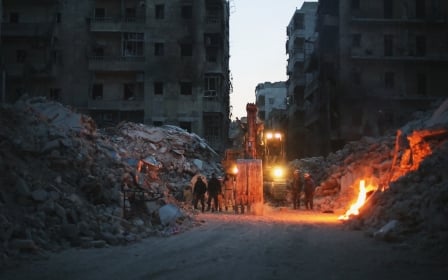