Inside the Arab heart of Mexico City

Arab immigrants have become a normal part of everyday life, but in many ways they remain a community apart 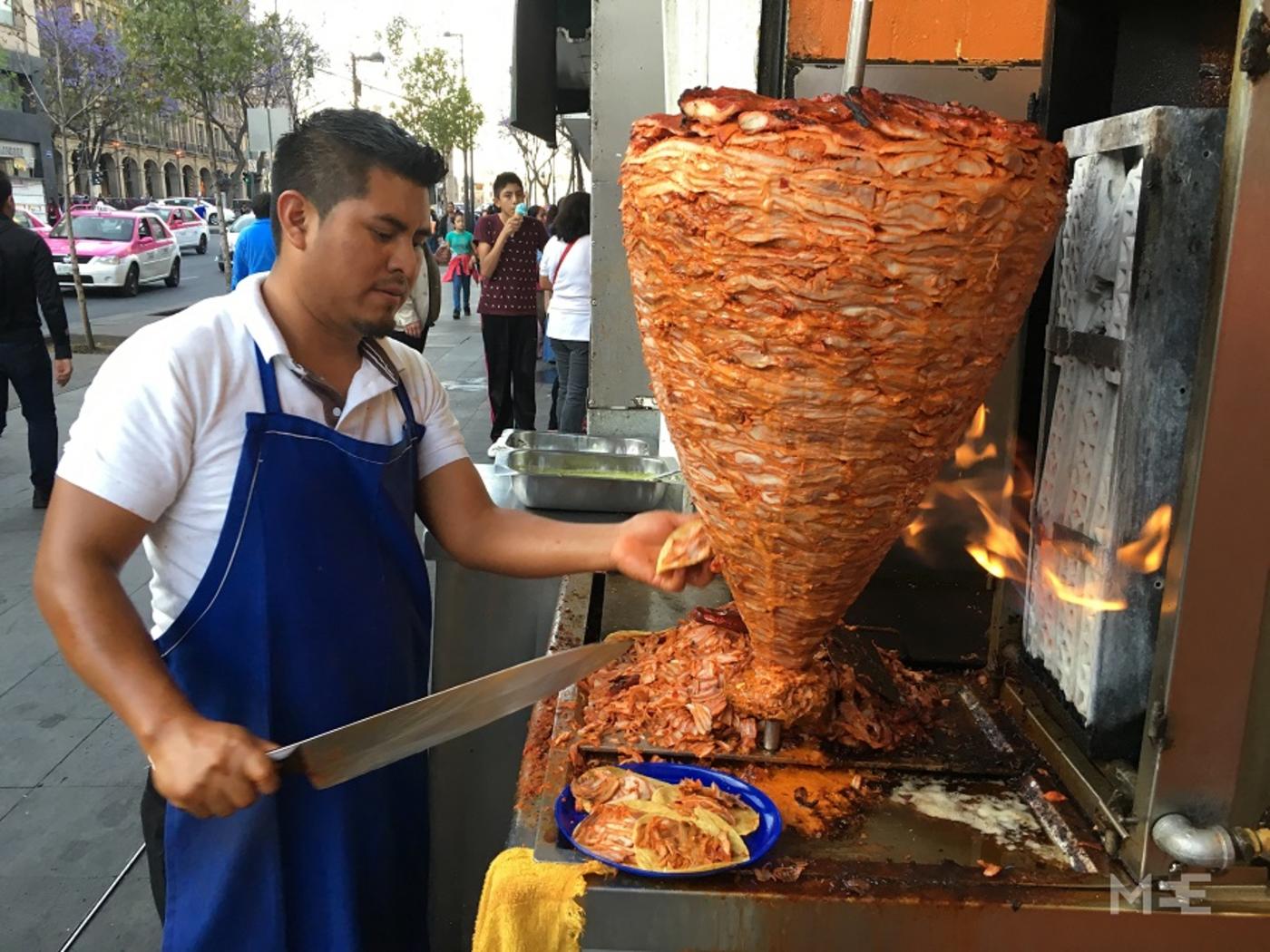 A vendor in Mexico City cuts meat for tacos al pastor, a dish believed to derive from the shawarma kebab, introduced by Lebanese immigrants in the early 20th century (MEE/Alex Shams)
By
Alex Shams

VERACRUZ, Mexico - Overlooking the Mexican port city of Veracruz in the Gulf of Mexico stands a huge statue dedicated to the “Lebanese Immigrant”.

The bronze memorial is a testament to the important role that tens of thousands of Arabs have played in shaping modern Mexico when immigrants - whose numbers are estimated to be between 400,000 and 2 million - started arriving in the late 19th and early 20th centuries looking for a better life.

“Our souls are split into two,” said Aida Jury De Saad during an interview with Middle East Eye at her home. Although she grew up in Michoacan state, De Saad has visited Lebanon numerous times.

The story of De Saad, a third-generation Arab-Mexican, exemplifies the lives many immigrants have had, and she considers herself a proud inheritor of the country’s Lebanese traditions.

To step into her home in a leafy suburb of Mexico City is to step into the mountains of Lebanon. The doorway is emblazoned with a tile reading Ahlan wa Sahlan, or welcome, in Arabic, and the interior is filled with artwork reflecting the generations of connection to the Middle East her family has fostered.

Setting sail to meet the 'paisanos'

The majority of Arabs came to Mexico from Mount Lebanon, which had witnessed the collapse of its silk industry after the Suez Canal’s opening in 1869 linked European markets to Far Eastern competitors. In the decades that followed, tens of thousands from Syria, Palestine, Jordan, Iraq and Egypt began arriving in Mexico as well. World War I led to a new wave, as widespread food shortages and famine ravaged the Levant.

De Saad’s grandfather, Jose Jury, was born in 1878 in Bzebdine village in Mount Lebanon. After the demise of the silk industry - the village’s main employer - he set his sights on the Americas.

“He gathered money bit by bit from his relatives; one lira here, two liras there,” De Saad told MEE. “With that, he bought a ticket for Veracruz and set sail with just a single suitcase.”

Upon arrival, Jury was directed to an honorary Ottoman consul who had himself arrived only a little earlier. Jury then helped direct immigrants to cities where they could find people from their homeland - paisanos, a Spanish word meaning fellow countrymen that even today Arab-Mexicans use to refer to each other. With the help of paisanos, Jury set up a sock factory in Morelia.

But the honeymoon was not to last. After the Mexican Civil War broke out in the 1910s, the country was beset by anti-foreigner campaigns, including massacres of East Asians and targeted killings of Arabs. A 1927 law banned immigration from the Middle East and made those already in Mexico subject to deportation. Jury was soon caught up in the hysteria.

“In the late 1920s, after all those years of hard work, the government expropriated his factory,” De Saad told MEE. “He was forced to start over, selling trinkets on the road for a living.”

Without knowledge of Spanish, many immigrants became peddlers and merchants, spreading out to sell goods to towns and isolated communities. The travelling Turco - as Middle Easterners were called - became a well-known figure, and Arabs grew prosperous as a result of their crucial role in the economy.

Yet he soon had had enough of the life of a peddler.

“He decided to go to Mexico City to convince actors and actresses to come and give theatre performances,” De Saad said. Buoyed by his success, her grandfather brought the first film projector to the region, eventually setting up the area's first cinema.

His success resembles that of many Arab immigrants, who despite widespread prejudice and antagonism managed to join the upwardly mobile Mexican middle classes. Throughout it all, the family never forgot their roots.

“My mother missed her village so much that when she went for her last visit, she made sure she painted Bzebdine. She hung that painting up in our home and we grew up always seeing it,” she told MEE.

Keeping ties to the motherland

De Saad has since taken an active role in fostering connections with the Arab world. She is one of the founders of Al Fannan, a club for artists of Lebanese descent based in Mexico City. First founded in 1957, this is just one of the many centres across Mexico that cater to Mexicans of Arab descent and are emblematic of the success Arab immigrants have enjoyed.

While Christians form the most prominent and visible sector of the Arab Mexican community, Jews, Druze, Muslims and other denominations represent a broad spectrum of religious diversity.

The Lebanese are the most visible Arab community, but the majority of their ancestors arrived on Mexican shores long before a country called Lebanon actually existed, as it formally became a country under the French Mandate in the 1920s. A large percentage came from other parts of the Arab World, such as Syria, Palestine, Iraq, Jordan and Egypt.

Arab culture’s impact can be seen in many aspects of Mexican life, but none is more obvious than in its cuisine. Anyone who has seen one of its most popular street foods, tacos al pastor, will note more than a passing resemblance to Arabic shawarma or Turkish doner. Seasoned with the native spice achiote, the meat roasts on a spit for hours, after which chunks are cut off and eaten on a corn tortilla coated with pineapple, cilantro and onions.

The Yucatan Peninsula, meanwhile, is famous for ground meat and bulgur patties called kibbeh - also the name of an identical Levantine dish.

Even Mexican Catholicism has not been spared by Arab influence. At the heart of Mexico City’s historic city sits the baroque Church of Our Lady of Balvanera, better known as the Maronite cathedral.

The cathedral is the national centre of St Charbel and St Rafqa, Lebanese Maronite saints that have become central to rituals and pilgrimages here. The majority of those who visit the cathedral are non-Lebanese Mexicans, drawn by a fervent belief in their powers to help fulfil the prayers of the faithful.

Theresa Alfaro-Velcamp, a scholar of Middle Eastern immigration and author of So Far From Allah, So Close to Mexico, has noted that discrimination pushed successful immigrants to increasingly identify with Lebanon.

“The constructed history tends to ignore the diversity of immigrant roles in Mexican history,” she notes. “The diversity of the immigrants and their contradictory reception in Mexico has largely been overshadowed by the notion that the Lebanese quickly acculturated and economically dominated.”

The Lebanese story has come to overshadow the many different Arab immigrant narratives. Many, for example, reacted to discrimination by blending into Mexican society - quite easy given similar physical features - and many Muslims or Druze assimilated into Catholicism.

No one is certain about the total number of Arab Mexicans partially because many Mexicans are unaware that older relatives - many of whom took Hispanicised names - were originally Middle Eastern.

Mexican national identity is built around the idea of mestizaje, which describes Mexican culture as the product of Spanish and indigenous peoples mixing and thus excludes the contributions of immigrants as well as African Mexicans. As a result, many immigrant groups have instead portrayed themselves as successful foreigners while not assimilating to mestizo Mexican culture. They function as relatively wealthy - and relatively secluded - social groups that do not mix too far outside their own community and institutions.

‘We are more like the Arab world than Mexico’

Mexico is today home to between 40,000-65,000 Jews, with between one-third and one-half of them tracing their roots back to the Arab world, and around a fifth that are Sephardic having roots in Turkey and the Balkans.

Linda Bucay is a Jewish psychologist who was born and raised in Mexico City. Her mother’s side of her family are from Aleppo and her father’s side from Damascus, with some Beiruti roots thrown in as well. Her grandmother - born and raised in Mexico - prefers speaking in Arabic, and Bucay grew up sprinkling her Spanish with Arabic phrases such as Allah ma’ak (God be with you) and kish barra (throw it out of your mind).

“I think we are more like the Arab world than we are like Mexico,” Bucay told MEE, noting that much of the food and attitudes have more in common with Syrians. “My family lived in Syria for generations before coming here in the 1930s, so it makes sense that we’re still connected to that culture.”

Despite this, however, Bucay said she had little contact with the Lebanese community. While Christians have generally integrated into Catholic Mexican society to a certain degree, Bucay noted that for Jews it had been a somewhat different experience.

Historical anti-Arab or anti-immigrant prejudice is compounded by anti-Semitism, often informed by a Catholic bent. Until 1821, it was illegal to be Jewish in Mexico due to the Catholic Inquisition.

Even today, difficulties persist. One of the few Catholic friends Bucay remembers growing up with once in anger accused her of helping to kill Jesus Christ.

Bucay chuckles when she remembers the incident, adding: “I’d love to think I did something so important!

“I’m Mexican and I love this country, but I don’t feel completely part of the culture. I don’t feel better or worse, just different,” she added.

While the Lebanese community maintains a visible role as a community that is both foreign and local, other Arabs congregate around their religious identities, joining synagogues, mosques and religious centres where a different vision of Arab-Mexican life proliferates.

And for the hundreds of thousands who have assimilated into broader mestizo society, there is always the chance that one day they will find themselves eating a taco al pastor beside a Moorish cathedral somewhere in Mexico thinking that something about the whole scene feels very close to home.