Islamophobia and fear increasing in the Netherlands

'By making Islam problematic you’re making the presence of millions of Muslims in Europe problematic. That is the challenge we face.' 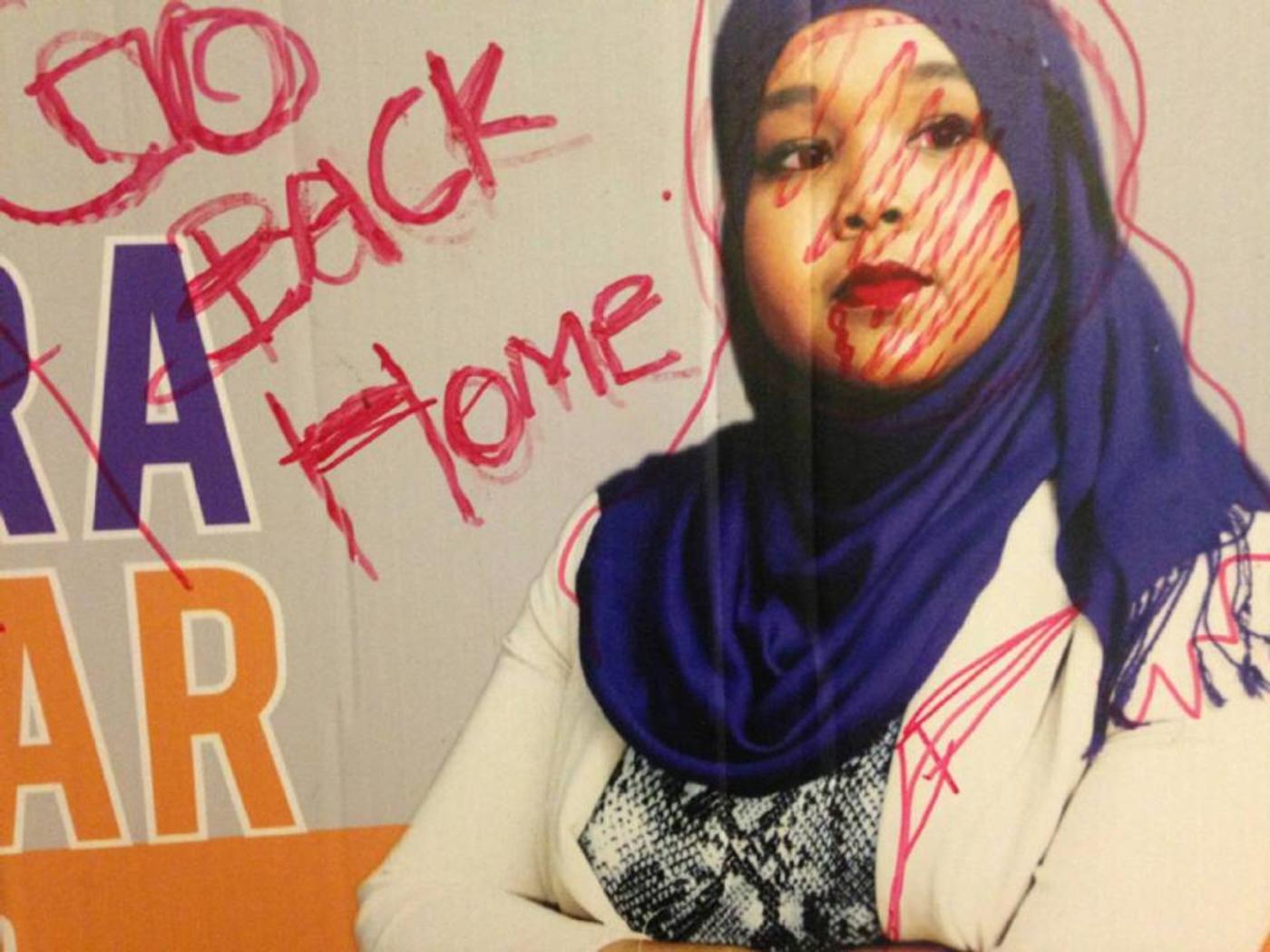 Almere, near Amsterdam, is a brand new town. Built less than 40 years ago, in the Dutch polder, nowadays it is home to around 200,000 inhabitants. There are no official statistics about the number of Muslim citizens in Almere, but the city has significant Moroccan, Turkish and other immigrant communities. “It is a city with broad cultural and religious diversity” as Hasib Moukaddim puts it, “but also with a lot of polarisation”.

Moukaddim, 35, and a prominent voice in the local Moroccan community, is worried. “Muslims here are living in fear,” he says. “The municipal council and local authorities should be more aware of what is going on.” From his office on the fifth floor of Windesheim University, where he teaches social sciences, Moukaddim has a good view of Almere’s main square, where one can observe an interesting mix of dark and white faces, women with and without headscarves, local vagrants drinking beer and teenagers hanging around.

“Look, I know we have all kinds of violence in our cities: hooliganism, vandalism, violent Moroccan teenagers… We read about it in the media and all of it is bad. But what really hurts me is that violence against Muslims is not seen as an issue. Dutch media are almost silent about it. However, we are talking here about racist, discriminatory behaviour. Especially women are victimised: scolded, spat at, hijabs pulled off, beaten. Recently, a white man in Almere physically attacked two elderly Muslim women here. He was not arrested so we don’t know why he did it. But we do know that aggression against Muslims is increasing, especially after the terrorist attacks in Paris.”

The story? Today I received a phone call at 11:44. A Dutch man told me that I was a dirty Muslim whore and that my mother was a pig. Than he put down the phone. (…) I was completely in shock. I contacted the police but they told me they could not follow up because there was no direct threat to me.

This is one of many entries on the Facebook page ‘Meld Islamofobie”, online since the Paris attacks in January. Rahma Bavelaar, one of the "hotline online" initiators, firmly believes in the use of social media to raise the issue of Islamophobia.

“There is a low threshold for victims to contact us. We ourselves are a group of Muslim professionals, we empathise with our fellow Muslims, and that inspires confidence. The response to our initiative has been overwhelming. We were taken aback with the sheer number of cases, some of them quite violent. Our team tries to verify the incidents, though that is not always easy.”

“Interestingly, we are receiving many more notifications of Islamophobic incidents than the police or other authorities. The reason may be that many Muslims distrust the police and some are not aware that discrimination and racism are punishable by law in the Netherlands. Another reason is that at least 95 percent of the incidents concern Muslim women. Often the incidents have a certain sexual connotation and the offenders are white males. Women are afraid to go to the police or even to talk about what has happened.”

There are reasons to believe that the incidents registered by Meld Islamofobie only represent the tip of the iceberg. The activists, who are now building an Ushahidi kind of website to crowd-map Islamophobic incidents, are happy with the more than 8,100 Facebook likes they received in less than two months. But there are around 900,000 Muslims in the Netherlands (in a total population of almost 17 million) and academic research suggests that fear and hate of Muslims is a widespread phenomenon.

Law in the Netherlands prohibits discrimination on religious grounds but, unlike with anti-Semitism, Islamophobia is not officially registered as a separate category. While the Jewish community has a strong lobby group, the Muslim community is fragmented into several associations and institutions along divides of ethnic background: Moroccan, Turkish, Somali etc..

Recent research undertaken among 500 Dutch secondary education teachers shows that 61 percent of them witnessed verbal or physical aggression against Muslim students. There were many cases of hurtful remarks about Islam and Muslims, abuse, threats and sometimes violence. Most teachers did call their students to account when these incidents happened and organised class discussions about religious values and tolerance. According to the research, many teachers were in favour of more education about Islam to counter ignorance and an atmosphere of violent negativity.

In the last 10 years, at least 39 percent of all 475 Dutch mosques (and probably more) faced vandalism, desecration, the painting of swastikas, decapitated pig heads, arson and threatening letters. This is according to a report presented on the 5th of March in Amsterdam by Dr Van der Valk. Many of the mosques were targeted several times. Van der Valk herself was taunted in a social media campaign, accused of “Islamo fascist lying”.

Nourdin El Ouali (34) heads the Nida party, an “Islam-inspired” local political grouping in Rotterdam. Nida is represented in Rotterdam’s municipal council with two seats (out of 45). El Ouali, who in the last two years became a prominent spokesperson in The Netherlands for a new generation of intellectuals with Muslim backgrounds, believes that too often Islamophobia is trivialised. “The fear of Islam is often considered as something rational. I think a third of all Dutch people have a certain fear of Islam. It becomes a real problem when fear turns into hate.”

Islamophobia is epitomised politically by Geert Wilders’ Freedom Party, which is, according to recent polls, one of the major political parties in the country. Wilders maintains that Islam is not a religion but a "totalitarian ideology". He wants to close Muslim schools, forbid the building of mosques and stop immigration from majority Muslim countries. According to El Ouali “this is a worrisome phenomenon that should not be underestimated. We see the same phenomenon elsewhere in Europe: The Front National in France, Pegida in Germany. There are similar Islamophobic parties in the Scandinavian countries and Austria. Islam is seen as a threat to the West, incompatible with the free world and democracy.”

El Ouali is convinced there is a direct link between terrorism and Islamophobia. “You can almost say Islamophobia increases with every attack. This development began with 9/11. Islam was seen as the new enemy. After 2001, it has gained in intensity.” After 15 years of fierce debates on Islam in the Dutch political arena and in the media, El Ouali does not see any change, “rather the opposite, unfortunately”.

“The deadlock can only be broken by creating a collective identity, a collective memory where everyone - Jews, Muslims, Christians, humanists - all have a place. If it’s only 'We and them' or 'the West and Islam' as diametrically opposing units, no solution will be found. By making Islam problematic, you’re making the presence of millions of Muslims in Europe problematic. That is the challenge we face.”

While almost 6 percent of the Dutch population is Muslim or of Muslim origin, the percentage in the port city of Rotterdam is around 25 percent. With 174 nationalities, Rotterdam is truly cosmopolitan. “The interesting thing is that you now have a generation that was born and raised here”, El Ouali says. “And this generation again has children who were born and raised here. We are part of this country. We are not here as guests but as a co-owners and we refuse to be judged on our ethnic roots or religious identity.”

“Muslims are often portrayed in an abnormal way, always as 'the other'. Perhaps it is because of globalisation that people in Europe have a strong need to define their own identities. Boundaries are blurring, there are so many uncertainties, the world is in crisis and people ask themselves: what are my roots, what is my DNA? So, to define yourself you need an image of what you are not. That is: the 'other', the Muslim.”

Hasib Moukaddim  notes that the anti-Islam narrative does not explain people’s behaviour. “Many people are blaming Islam for everything bad. But they do not take into consideration the social-cultural or social-economic circumstances of Moroccans and Turks who immigrated to this country. Islam does not explain why our parents came here in search for work and income in the seventies. There are so many things that cannot be understood through Islam.”

"What really hurts me is how Muslims are discredited in this country," Moukaddim continues, "how politicians like Wilders sow mistrust and suspicion. Muslims are lying and cheating; 'never believe a Muslim', they say. Unfortunately, in Almere, Wilders’ Freedom Party is the biggest party and many people do believe him. That is why we have so much polarisation here.”

Moukaddim is not very optimistic and has seen things go from bad to worse in the last few years. “But that is no reason to keep quiet, on the contrary. I think it is of utmost importance to offer each other some sort of comfort zone, to keep the dialogue going. What are you prepared to do to make co-existence possible? And another key question is: how can you take away the fear?”