Who are the millionaires behind the Islamophobic industry in America? 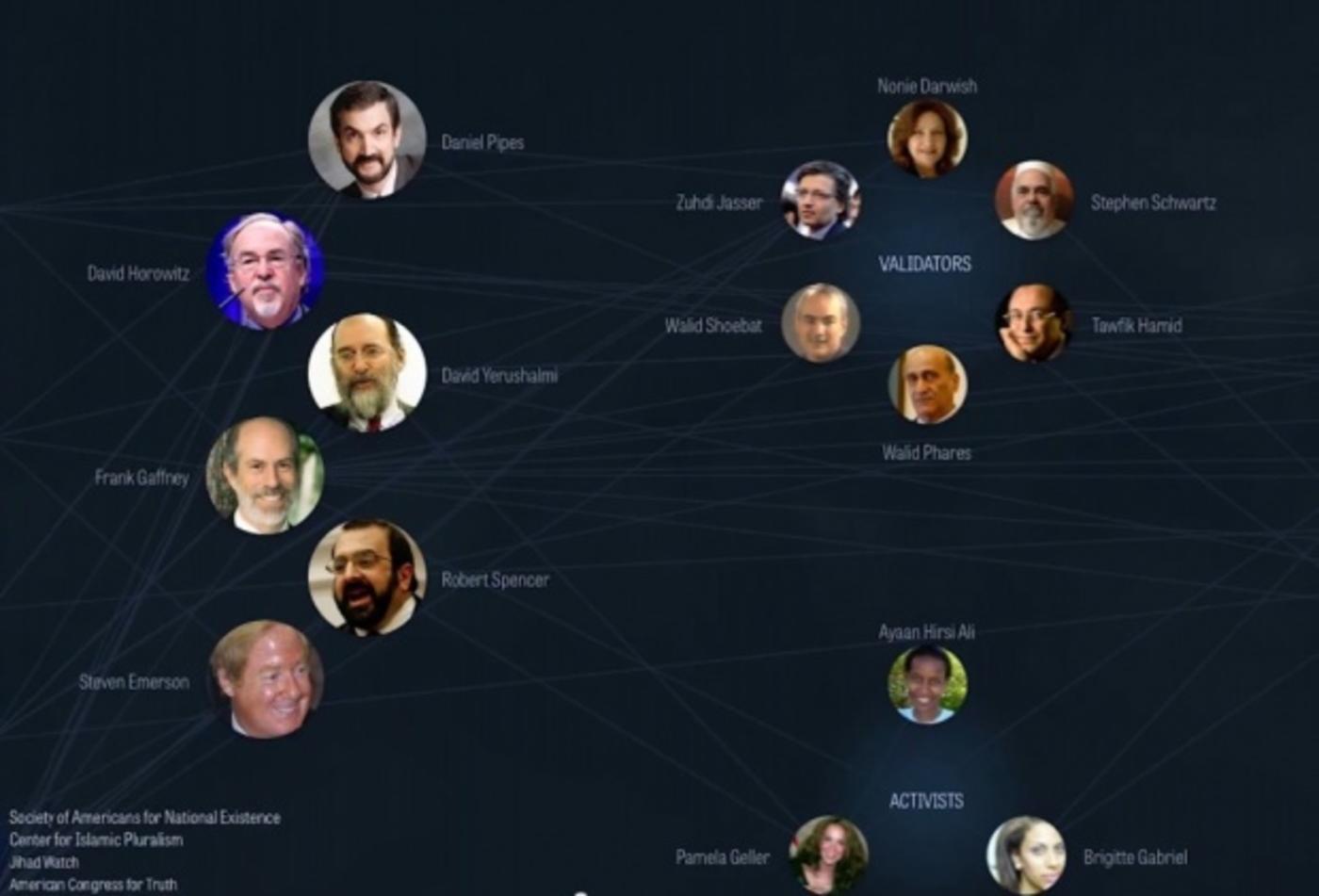 In an interview on CNN, Suzanne Barakat, the sister of one of the Chapel Hill shooting victims, said the film American Sniper has helped to not only “dehumanise Muslims” but also has created an atmosphere that is akin to an “open season” on Muslim Americans.

Barakat says it was this climate of anti-Muslim bigotry that led to her brother’s barbaric execution at the hands of avowed anti-theist Craig Stephen Hicks.

Is Barakat’s claim of an “open season” on Muslim Americans based in reflexive grief or are her words a sombre narrative of what is really happening in America today?

Sadly, we need only examine violence and intimidation carried out against Muslims in the past week alone to establish a rising trend in anti-Muslim bigotry. On Friday, an arsonist destroyed an Islamic centre in Houston, Texas. An actual fireman posted on Facebook, “Let it burn…block the fire hydrant.” On Tuesday, police arrested a man for making a “bomb threat” at a Muslim centre in Austin, Texas. And a Hindu temple in Bothell, Washington, was mistakenly targeted with anti-Muslim graffiti. All these events in a single week - most of which were largely unreported by the mainstream media.

Saladin Ahmed, an Arab-American science fiction writer, summed up the current plight of Muslims in America today when he tweeted, “It's some fucked up shit when you realise you're feeling thankful for 'not looking Arab' and not having an accent.”

The release of American Sniper has led to an increase in incidences of violence and intimidation carried out against Muslim Americans, according to the American-Arab Anti-Discrimination Committee (ADC). "A majority of the violent threats we have seen over the past few days are result of how Arabs and Muslims are depicted in American Sniper,” said the ADC in a statement. “We have collected hundreds of violent messages targeting Arab and Muslim Americans from movie-goers.”

If an overtly racist and demeaning film has played a part in the escalation of Muslim harassment in America, it’s only a bit part. The lead actor is a little more conniving and sinister. The lead actor is not only flushed with cash, but is also executing a coordinated and sustained propaganda campaign to dehumanise Muslim Americans as part of a broader strategy to support pro-Zionist goals.

Since 2001, a group of shadowy groups and individuals have spent millions to disseminate misinformation about Muslims into the mainstream media, body politic and public consciousness. The objective? Provide political cover for both the US’s war on terror, and Israel’s war on Palestinians.

Yasmine Taeb, co-author of the new report, Fear, Inc. 2.0: The Islamophobia Network’s Efforts to Manufacture Hate in America, said in a recent interview that “since 2001, there has been over $57 million that’s been contributed to this fear-mongering, anti-Muslim, anti-Islam organisations by eight very wealthy donors.”

According to the Council on American-Islamic Relations, 37 US-based anti-Islam groups enjoyed a combined revenue of $119 million in the years 2008 to 2011. One of CAIR’s findings is that these groups are “often tightly linked” and that “key players in the network benefited from large salaries as they encouraged the American public to fear Islam.”

These well-funded and well-organised groups push erroneous and spiteful narratives:

In Europe, there’s the Eurabian conspiracy theory, which holds there is a secret plot between European and Arab leaders to facilitate mass Muslim immigration, “subjugate Europe, and transform the continent into an Arab colony, Eurabia.” Like the Jewish conspiracy theories in Germany during the 1930s, no evidence is ever offered to support either the plot or the actual likelihood Muslims will come to dominate Europe, demographically. It’s a conspiracy that has been pushed by everyone from the nationalistic English Defence League to Dutch politician Geert Wilder, and is outlined in great detail in Bat Ye’or’s book Eurabia: the Euro-Arabiz Axis.

In America, it’s the Sharia law conspiracy theory, which holds that “alongside the use of violence is the strategy of stealth jihad, which aims at the infiltration of national institutions and the assertion of Muslim’s demands through the legal system.” It’s a conspiracy pushed by everyone from the Republican Party to Fox News, and is outlined indepth in Mark Steyn’s book American Alone.

The Sharia law conspiracy theory can easily be dismissed as wildly ridiculous, but it’s a conspiracy that has gained traction nevertheless. A 2011 survey found 30 percent of Americans believed Muslim Americans were seeking to replace the US Constitution with Sharia law.

So who are these groups and individuals pushing evidently obvious misinformation and gross generalisations for the purpose of manufacturing a climate of fear, suspicion and anger toward American Muslims?

US neo-conservative activists David Horowitz and Daniel Pipes established Campus Watch in 2002, which identified and monitored university professors who openly supported rights for Palestinians and encouraged students to protest against Israel’s oppressive policy towards its Arab citizens, and those in the West Bank and Gaza. One year later, Horowitz founded DiscoverTheNetworks.org, which identified and assailed groups and individuals “accused of enabling Islamism and undermining American values.” And in 2007, Horowitz organised Islamo-Fascism Awareness Week.

NYU adjunct professor Arun Kundnani notes that by 2008, “a group of well-funded Islamophobic activists had coalesced. Pamela Geller’s blog Atlas Shrugs (named after Ayn Rand’s novel) had come to prominence with the Khalil Gibran International Academy campaign. She worked closely with Robert Spencer, whose Jihad Watch site was run as a subsidiary of the David Horowitz Freedom Center.” Kundnani also notes that the Los Angeles-based millionaire couple Aubrey and Joyce Chernick used their foundation to fund Robert Spencer with “close to a million dollars between 2004 and 2009.”

It was during this period that ACT! For America was formed. Started by Bridgette Gabriel in 2007, this Islamophobic citizen action network had established more than 570 chapters and 170,000 members before the end of its second year.

It’s this network of anti-Muslim organisations and individuals that drives not only media distractions, such as the hysteria over the “proposed” mosque at Ground Zero, but has also largely driven the narrative of conservative media, the religious right, New Atheism, and nearly the entire Republican Party. “In America today, the level of public anti-Muslim bigotry is shockingly high. Politicians and pundits, usually on the right, say things about Muslims that they would be immediately fired for saying about Christians or Jews,” writes Peter Beinhart.

During the 2012 GOP presidential campaign, Herman Cain declared: “There is this creeping attempt, there is this attempt to gradually ease Sharia law and the Muslim faith into our government.” Former Speaker of the House Newt Gingrich thundered, “I believe Sharia is a mortal threat to the survival of freedom in the United States and in the world as we know it.” While Peter King (R-NY), chair of the House Homeland Security Committee, claimed: “There is an infiltration of the Sharia practise into all of our operating systems in our country, as well as across Western civilisation.”

There is no evidence anywhere from anyone to support the notion that Muslim Americans desire to implement Sharia law in America. In fact, a 2011 Pew Research Center poll found that perhaps as many as 80 percent of Muslims living in America do not attend mosques and have a secular outlook.

So where are these conservative politicians and the right-wing media getting their Sharia law talking points from?

During the 2008 election, and with a Democratic candidate whose middle name is Hussein, 28 million copies of an anti-Muslim propaganda film, Obsession: Radical Islam’s War Against the West, was distributed throughout hotly contested electoral battleground states. The film was funded with a $17 million donation from a conservative group that political funding laws allow to keep the names of its donors anonymous, and forewarns of a Muslim plot to takeover America.

While the film did not prevent candidate Barack Obama from winning the presidency, it was successful insofar as it injected anti-Muslim hysteria into America’s political bloodstream. According to a 2010 Time magazine poll, more than 25 percent of Americans believed the President to be a Muslim.

Fear and suspicion is the root cause of violence carried out against Muslim Americans. In a 2011 poll, 6 percent of Muslims said they had been victims of a hate crime. Louise Cainkar, author of The Impact of the September 11 attacks on Arab and Muslim Communities in the United States, cites a study in which all those interviewed, college-educated Muslim American women in Chicago, had been “the victims of physical or verbal abuse, or knew someone close to them who had been”.

If discrimination at the hands of an ever fearful and hateful general population isn’t enough, Muslim Americans are also faced with the fear of reporting the crime carried out against them. Not only do Muslims believe the authorities won’t help, but Muslims are acutely aware that they’re the targets of deportation, surveillance and harassment by law enforcement. “That excessive scrutiny has eroded the trust necessary for victims to report hate crimes,” writes Farhana Khera.

Taeb says the main goal of Muslim civil rights activists should be to name and shame the funders of anti-Muslim bigotry, which she hopes will “dry up the money”. In an interview with Democracy Now, Taeb says: “If we eliminate the money trail, if we eliminate these millions of dollars that are being donated to these organisations, that essentially their living is now just to promote discriminatory policies against three million Americans.”

Khera suggests the Justice Department should launch a website modelled on the Education Department’s Stopbulling.gov - dedicated to informing the public on how to identify and report hate crimes. “The site should also provide a one-stop shop for tools and resources for law enforcement, educators, public officials, media and other key stakeholders in reducing hate-motivated violence,” suggests Khera.

These are some of the things we can do to lessen persecution against Muslims based on their faith. The Chapel Hill murders must be seen as a tipping point - an opportunity to examine and confront the forces that are leading Americans to believe the Islamic faith seeks to destroy “American values.” It was this worldview (“Islam is at war with the West”) that led Anders Breivik to murder 77 students in Norway; it’s probable it led Hicks to murder three Muslims in North Carolina, and it certainly is behind the spike in anti-Muslim hate crimes. So what are we going to do about it?

Photo: An image grab from a video by the Center for American Progress (YouTube) Religion
Arson suspected after large fire at US Islamic centre