Parking space terrorism: Time for action after killing of three US Muslim s

Ramzy Baroud
Chapel Hill police claimed that the “ongoing dispute over parking may have led to a triple shooting”. The media embraced the statement with little questioning 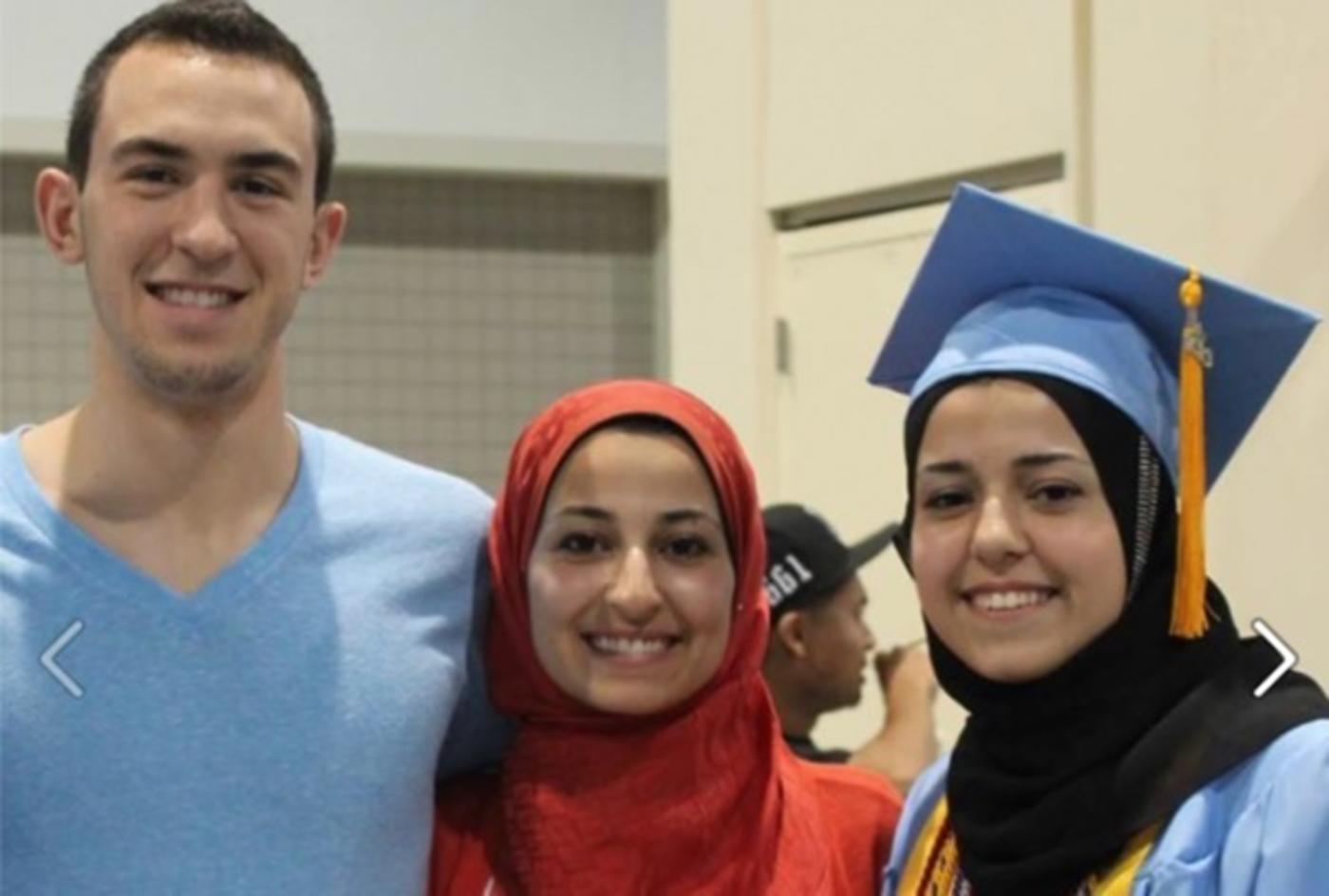 The murder of three American Muslims at a University of North Carolina condominium on Tuesday 10 February was no ordinary murder, nor is the criminal who killed them an ordinary thug. The context of the killings, the murder itself and the media and official responses to the horrific event is a testimony to everything that went wrong with our country since it unleashed it’s long-drawn-out “war on terror”, with its undeclared, but sometimes declared enemy, namely Islam and Muslims.

Horrific as it was, the killing of a husband and wife, Deah Shaddy Barakat, Yusor Abu-Salha and her sister, Razan Abu-Salha, by homegrown terrorist, Craig Stephen Hicks, is the kind of violence that can only fit into a greater media and official narrative, which designates millions of innocent Muslims, in the US or across the world, as enemies or potential terrorists.

Countless television hours and endless space in numerous media has been dedicated to vilify and demonise Muslims throughout recent years. Muslims’ attempts to distance themselves from every militant grouping, ideology and tendency has done them no good. A Muslim is a terrorism suspect until proven innocent, especially if a bearded, brown man, or a headscarf-clad woman.

The end result of that dehumanisation has been racism, racial profiling, extra-judicial killings and war. It was only a matter of time before that violence reached the nominally safe Muslim communities in the US itself.

The episode of dehumanisation is long, complex and protracted; also, quite clever, for it involves billion-dollar media outfits and Hollywood itself, which already has an awful track record regarding negative and stereotypical representation of Arabs and Muslims.

The outcome is a whole industry that is predicated on double standards and half-truths.

Imagine if a member of the Iraqi resistance, an Iraqi sniper, if you will, killed 164 US soldiers, who were armed to the teeth and present in his country as part of an invading force.

Imagine an Arab country financing a massive movie production detailing the story of that Iraqi sniper, portraying him as a hero, and US soldiers as savages.

How would the US media, government and audiences react?

It would be an Arab-bashing fest. Few, if any, would dare rationalise his deed, suggesting perhaps that he was a man defending his own country. What would be emphasised thoroughly is the “savage nature” of the Arabs and their innate hatred for America and its noble values. The whole Arab creed would be brutalised, those who made the movie, and those who celebrated the heroics of the sniper.

An American Sniper, however, is not a fictitious illustration of a point, but a bloody reality, itself a representation of the killing of millions of Arabs and Muslims in America’s wars.

Even relatively muted criticism of the evil deed of Chris Kyle - the hero of the reality-turned-movie, The American Sniper, who made 164 confirmed “kills” during his four tours in Iraq because they were “savages” who deserved to die - were shut out by a massive outcry from media and members of society. American killers are heroes, regardless of what they do or stand for.

The enthusiasm for more military interventions and such heroics, like that of Kyle, however vile, means that supposed “moral awakening” inspired by the advent of President Barack Obama rarely registered in the collective psyche of the nation. While there is ample evidence that Americans are “tired” of war, that very war fatigue should not be conflated with a departure from the type of dialectics that rationalised war in the first place.

In fact, while the cheerleaders for war might change political camps, ideology or even religious philosophy, ultimately, they are the same breed of people: a mostly white, male-dominated and chauvinistic tribe of well-funded politicians and media pundits, with an unquenchable thirst for “intervention”.

Hicks, the terrorist who killed the three young Muslims, subscribes to a school of thought known as New Atheism, what religious scholar Reza Aslan refers to as the school of “anti-theism”. It is, in part, another hate-filled platform, and despite its supposed disdain for all religions, its malicious energy mostly targets Muslims.

New Atheists, of course, are different from the majority of atheists, who don’t use that designation to foment hate against a specific religious group. The anti-theist gods include the likes of Richard Dawkins and Sam Harris, who, according to Aslan, respond “to religion with the same venomous ire with which religious fundamentalists respond to atheism.”

In one of his Facebook posts, Hicks, a lover of guns, quoted Dawkins:

“The last vestige of respect for the taboo disappeared as I watched the ‘Day of Prayer’ in Washington Cathedral, where people of mutually incompatible faiths united in homage to the very force that caused the problem in the first place: religion.”

But of course, not any religion, but Islam. Let alone that such an ignorant breed pay no heed to any relevant political context, they so foolishly blame a whole religion for what is essentially a political conflict. Did they ever pause to wonder if it might be possible that invading countries, killing, raping, pillaging, destroying mosques and churches, and urinating on the dead, have something to do with why many Muslims hate US foreign policy and are willing to use violence in response?

Hicks too hated the three Muslim kids based on that same foolish, murderous logic.

But hating Muslims is not your everyday racism and prejudice, which has been “as American as apple pie and Napalm” (a funny, sad line from the American comedy, M.A.S.H). It is a readily available fodder for the ongoing war and future war in Muslim countries. It is the required amount of dehumanisation needed to wage war.

This is why Islam and Muslims are equated with terrorism, and why terrorism is used almost exclusively to describe violent acts committed or allegedly committed by Muslims.

This logic strips every act of violence carried out by a Muslim or a self-proclaimed one from its immediate context, however rational, and lumps it into a larger taxonomy reserved exclusively for Islam and Muslims. It refuses to use the same categorisation for any other act of violence, thus the irritating insistence on the correlations between politically motivated violence and Islam. The same champions of this invalid logic are those who constantly push the line: "All Muslims are not terrorists, but all terrorists are Muslims."

The assumption might be inane, but the intention is anything but. It absolves the war criminals, who planned, executed and justified the war; the soldiers who did the fighting, and those who ensured that there can be no legal accountability for its numerous awful deeds – millions being killed, maimed and all.

Instead, it puts the onus on ordinary Muslims who are set up to prove their innocence to no avail, to absolve themselves from a crime they never committed - in fact, to answer for someone else’s crimes.

But Hicks, who walked into the flat of three students in Chapel Hill, NC and shot them, execution style, was not a Muslim. He comes from Christian heritage. He is not black or brown, but white. His name is not Ahmed, but Craig.

Neither the police nor the media would describe his crime as a hate crime, let alone terrorism, although his terrorism is unique in a way. His type resides on the top of the food chain in terms of race, gender and other criteria. Yet, somehow he is politically frustrated. Go figure.

He is not a member of a radicalised generation born into oppression, foreign invasion, poverty and other untold humiliation. If that was the case, one can, at least to a degree, fathom the hate, deconstruct the anger, or even rationalise that violence as a natural outcome of a certain reality.

To add insult to injury, the Chapel Hill police reacted mere hours after the terrorist act saying that an “ongoing dispute over parking may have led to a triple shooting”. The media embraced the statement with little questioning. That was clearly Hicks’ statement to the police, which was adopted as fact. The term terrorism was completely absent from mainstream media discourse.

Obama finally reacted to the heinous crime, but only after being urged on by a visibly moved Turkish President Recep Tayyip Erdogan. “As political leaders, we have responsibilities for the murders committed in the countries where we are in charge. We have to show our stance. If you stay silent when faced with an incident like this, and don't make a statement, the world will stay silent towards you,” Erdogan said.

The media’s insistence on the parking dispute story has become the dominant narrative. The tastelessness and insensitivity reached new heights when a US Inside Edition TV show produced a report on how to “safely” find a parking spot while avoiding dispute.

“Finding a parking space can be one of the things that pushes people over the edge, but there is always a way to find a spot at the mall,” said the show host Deborah Norville. Behind her, on a large screen, the three murdered Muslims. She didn’t even bother to mention their names, or list their contributions to their community. Their charity work alone was more than all the good that Hicks and his gun-toting “atheist” types can ever do for their community in a lifetime.

If the murderer was a Muslim or a black man, Norville’s report would have had a different title: “How do you spot a terrorist?” maybe, or “What to do about gang violence in my neighbourhood?” perhaps.

But if the victims are Muslims, which could be millions of Iraqis, thousands of Palestinians, or three Muslim students in North Carolina, the discourse shifts away from generalisations, politics or any context that may in fact help us understand the issue better.

So Hicks, we are told, killed the students “execution style” because of a dispute over parking spaces.

The same way that Chris Kyle – “The American Sniper” - made 164 confirmed “kills”, killing “savages” because that’s what national heroes do.

And US wars and sanctions on Iraq killed, starved and wounded millions to bring democracy to the Arabs.

This selectively insane logic will persist however, because there are millions of unrepentant politicians, extremist media pundits and well-armed men and women who refuse to see the recklessness of their “logic”.

They will continue to feed violence - which unlike what Hicks was led to believe - didn’t start on 11 September 2001 - and spit out the most dangerous of militant phenomena: al-Qaeda, IS and all the rest.

It is time for Muslims to demand that Obama issue more than a statement, but call the United States government and hate-filled media to account. These outrageous double standards must end, before more innocent lives are taken. 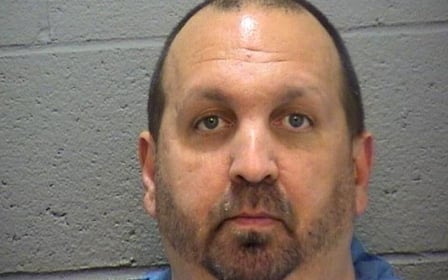