Israeli forces detain children as young as 7 during recent crackdown 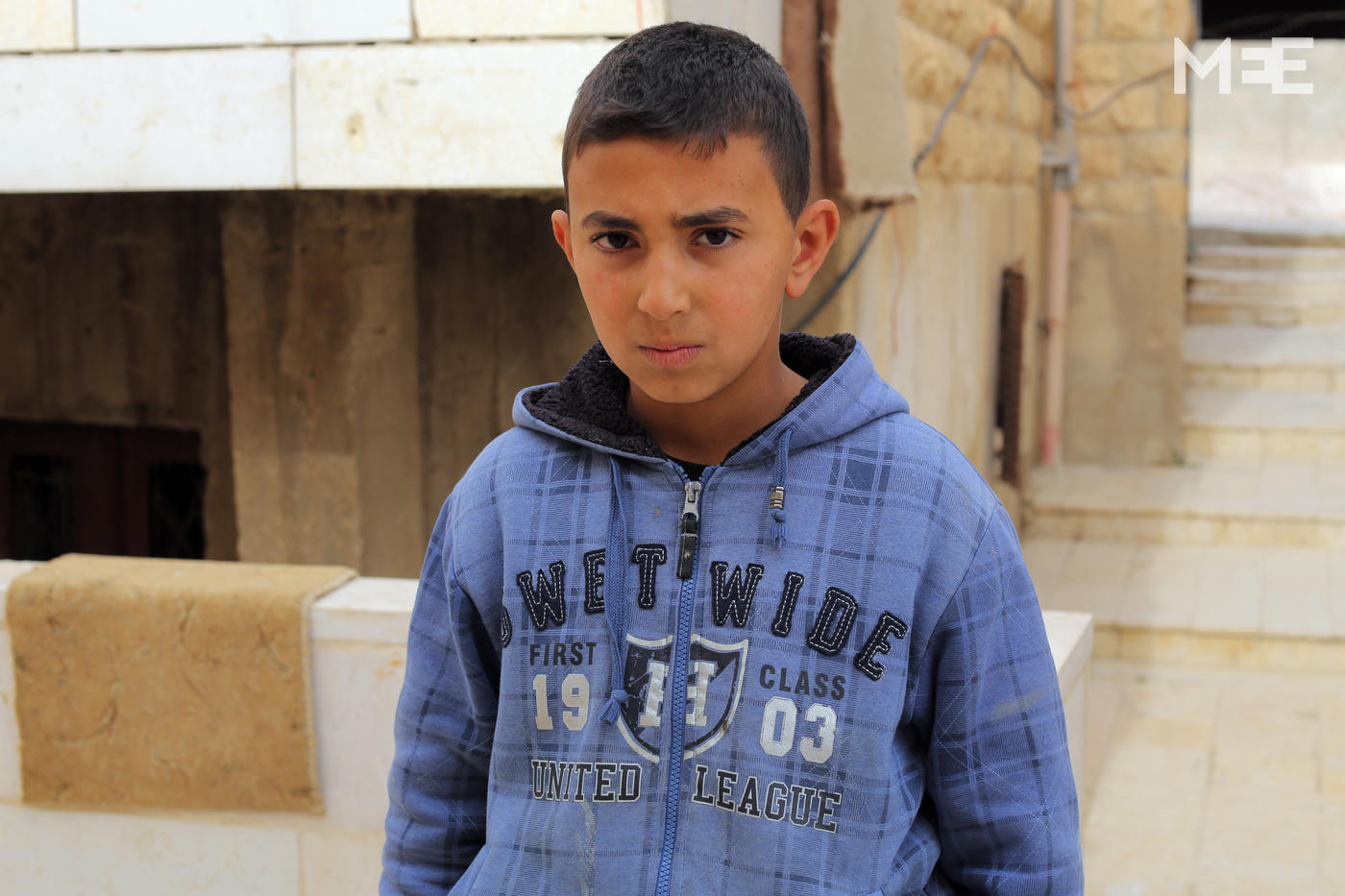 “I didn’t understand why they took me in the first place,” nine-year-old Yassin Ali tells MEE. “They asked me if I wanted a lawyer, but I told them I just wanted my mum and dad.” (Abed al Qaisi/MEE)

BETHLEHEM, Occupied West Bank - Israeli forces surrounded Yassin Ali on his way home from school, blindfolding the nine-year-old before lifting him into the back of an Israeli army jeep.

“My hands were tied in front of me, so I kept reaching up to pull the blindfold off, but the soldiers kept pulling my hands down to stop me,” Yassin recalls, the day after the incident.

Yassin was walking home from school on 24 November when clashes broke out near his home in Tuqu village, just south of Bethlehem City in the occupied West Bank. The clashes were on the main and only road on the way to his house. When Israeli forces caught him he was still clutching his school bag and was just trying to get home, Yassin tells Middle East Eye.

An Israeli army spokesperson was contacted, but did not respond for comment on the incident. However, Israeli forces have increasingly detained Palestinians throughout the occupied West Bank and East Jerusalem since the start of October, when tensions between Palestinians and Israelis began to soar.

Addameer, a Prisoner Support and Human Rights Association, has confirmed that from the start of October until the 30 November, Israel has detained 2,044 Palestinians, among them 345 children.

"Within the past two months there has been a significant rise in the number of arrests, including arrests of children; 345 is a huge number," the Addameer spokesperson said.

The spokesperson further said that International law dictates that the "arrest of children should be a last resort, but with what we are seeing now that is not the case; arrests of children are not being treated as a last resort at all."

After Yassin was captured, Israeli forces brought the nine-year-old to a military base in Bethlehem city and questioned him for more than seven hours, his family tells MEE.

The interrogation, he says, was the most frightening part of the entire experience.

“They showed me so many photos of other kids in the village and asked me to tell them which one of the kids throw rocks at soldiers,” Yassin says, the young boy’s eyes locked on his fingers where he nervously picks apart a piece of string.

His father reaches over to still his hands, telling his son to sit up straight.

“Tell them what happened,” his father says gently. “It’s important you have a voice to tell the world what happened.”

Yassin throws the string to the floor, straightens up and makes eye contact.

“I just wanted to go home, I didn’t tell them about any of the boys - I didn’t - but I was scared they would start screaming at me like they did that other boy in the video because I wasn’t helping them,” Yassin says, referring to a leaked video that circulated the internet of an Israeli interrogation of Ahmad Manasra, a 13-year-old Palestinian accused of attempted murder.

As the recent upheaval continues however, Israeli authorities are looking to change the civil law so that children with Israeli residency under 14 accused of terrorism charges would also be sentenced to time in adult prison, just like Palestinian children in the occupied Palestinian Territories.

On 25 November a preliminary vote to change the law passed 64 to 22 in Israel’s parliament, a strong indication that the law will pass.

Although Yassin says he committed no crime, he was still scared he would be jailed under Israeli military law.

“I didn’t understand why they took me in the first place,” he tells MEE. “They asked me if I wanted a lawyer, but I told them I just wanted my mum and dad.”

Yassin’s parents were immediately informed of their son’s detention by neighbours, and immediately called the Palestinian Authority liaison office to see how they could get their son back.

“The liaison office told us they were working on it, and that they would get Yassin back to us, but we didn’t know what would happen,” Ahmad Ali, Yassin’s father tells MEE from his family’s small living room. “When someone takes your child it doesn’t matter what anyone says, you just want them back.”

Eventually the liaison office was able to secure Yassin’s release and brought the boy back to his parents.

Ahmad says his son’s detention was unavoidable, as there is only one main road in his village that Yassin can take home from school, and on that road clashes between Israeli forces and local youth are frequent.

“It shouldn’t be normal, but it is,” Ahmad says, holding both his turned up hands out in question. “I have no way to keep my son safe, we just hope for the best. What else can we do?”

On 11 November another boy, 14-year-old Mohammed al-Umour, had been detained on the same road as Yassin. His family was informed that he would be held until they paid his bail which came to 2500 shekels ($644). If his family could not afford the bail, he would potentially be sentenced to a few months in prison.

His classmates at Tuqu Secondary School for boys were not about to let that happen. Mustafa Badan, 16, approached Majid al-Shaar, the school’s principal, about organising a fundraiser for Mohammed.

“Everyone immediately got behind the idea,” Badan told MEE outside the gates of his school. “To be honest, Mohammed is a lot younger than me, it’s not like we are friends or anything, but we heard about his case and that his family couldn’t afford to help their son so all of us knew it was our responsibility to step up.”

Badan and his classmates raised 1700 shekels ($438) in two days, and his family was able to come up with the rest, but al-Umour is still being held in detention.

Now that the bail has been paid, his classmates anxiously await his return to school.

'I won’t go back to the playground to swing anymore'

On 17 November a similar incident occurred in the Aida refugee camp, where seven-year-old Abdullah Daamsa was detained from the camp’s playground.

Abdullah was playing on the swings, pumping his little legs back and forth, getting higher and higher when a white ribbon of tear gas streaked through the sky and landed in the playground. His uncle, Faaraz Daamsa, was working at a building site near the playground, keeping an eye on his nephew from the top floor.

“When I realised [Israeli soldiers] just shot tear gas directly towards where Abudullah was playing I went to leave the construction site to go get him,” Faaraz told MEE. “But by the time I got down there the soldiers already had him and one of the popular committee leaders was arguing with them to let Abdullah go.”

Faaraz said he tried to convince the Israeli soldiers to let him go with his nephew during the arrest but they refused, so Abdullah went alone.

“They were speaking Hebrew the whole time,” Abdullah told MEE. “I couldn’t understand them.”

“They grabbed me from here,” he said, motioning to the back of his shirt. “I was so scared I couldn’t think of anything, I just went with them.”

While neighbours tried to step in and stop the detention of the seven-year-old, Israeli forces refused to release him.

“The soldiers kept telling me my nephew was throwing stones,” Faaraz shakes his head. “Look at him! He’s a seven-year old playing alone in a playground; of course he wasn’t throwing rocks, but if a boy his size was throwing a stone, what harm could it even do> How far can he even throw?”

Faraaz said he is just thankful the incident of Abdullah’s detention was caught on film, which meant he was able to get his nephew released after just a few hours.

“At first they tried to say they didn’t have Abdullah when we called the Israelis,” Faraaz said. “But then we sent them the video and they said for us to just give them a little more time with our boy and they would give him back to us.”

When asked which part was the scariest, Abdullah would not answer, but his uncle told MEE that the way the soldiers dress, with masks on their faces and big heavy equipment all over their body terrifies Abdullah.

The day after he was released, Abullah did not go to school and instead stayed home with his younger siblings. When asked if he went out to the playground to play during the day, Abdullah shook his head.

“I think I will just play in the house for a while,” the seven-year-old said. “I won’t go back to the playground to swing anymore.” Occupation
Palestinian parents told to keep children away from knives Refugees
The children of the refugee crisis speak 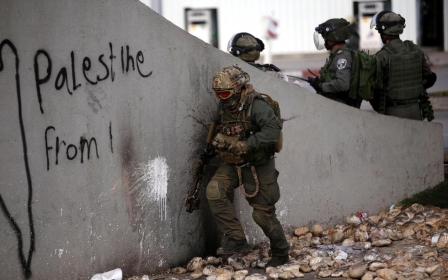