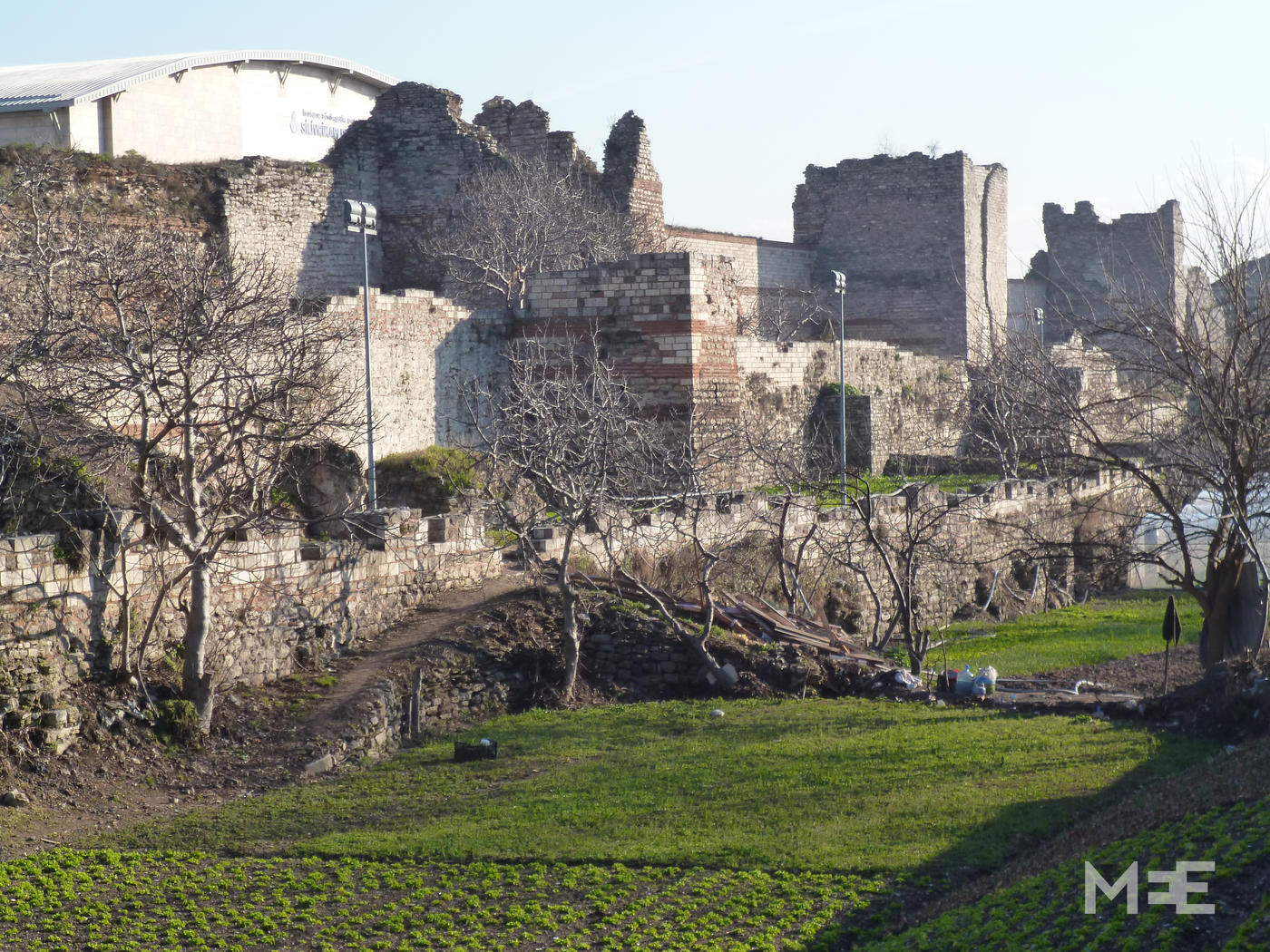 ISTANBUL, Turkey – If the ancient walls of this city could talk, one constantly repeated topic among the myriad of tales in their repertoire would be about the inevitability of change.

The 1,500-year-old walls would speak of the transformation taking place right beside their very own foundations and the tale would involve the story of people like Hasan Avci.

Fifty-one-year-old Avci is one of around 120 urban farmers who make a living by working 300 plots of land along a stretch of the city’s walls known as the Yedikule Bostanlari, or the Seven Towers horticulture gardens.

Avci and all the other urban farmers active there have been told by the Istanbul Metropolitan Municipality to vacate the plots by March at the latest. The reason behind this is simple.

The plots being farmed are public land and the farmers are illegal squatters. The municipality intends to convert the land shouldering the walls into a green recreational zone that will both protect the walls – a UNESCO world heritage site - and also make access for visitors easier.

Plans to regenerate the Yedikule gardens were first included in the municipality’s overall plans for Istanbul’s historic peninsula in late 2011 and the debate over the fate of the gardens has been raging ever since.

These gardens that ring sections of the walls have reportedly been farmed since the late 18th century when the adjacent moats were filled. Interestingly, they are also said to have been a primary source of fresh produce for the kitchens of Istanbul’s Ottoman palaces.

“All we are trying to do is carry on the traditions of our ancestors and earn a living at the same time,” Avci, a father of seven, told Middle East Eye. “We know we are using the land illegally but we pay rent and are not criminals.”

Turkish law allows municipalities to charge rent to any persons using public land in urban areas, but without granting them any legal rights as a result.

Avci, who has used this land to grow vegetables and flowers for the past 12 years, says the livelihoods of around 300 people, including dependents, are at stake. The urban farmers are open to alternative locations suggested to them by the municipality, but they also need to receive some assistance, according to him.

He says that some of the farmers have been working these plots for decades and are third- or fourth-generation farmers whose ancestors began farming these lands in Ottoman times.

The municipality, however, does not believe compensation or any other form of assistance comes into the picture since the occupants are squatters.

“These people are illegally occupying these plots and are also damaging the historic walls. They will be evicted and there is nothing more to it,” a municipal official familiar with the issue but not authorised to speak to the media, told MEE.

Just this past January, municipal teams accompanied by police tore down illegal structures built by the urban farmers on these plots. The farmers say they were simple makeshift sheds allowing them to change clothes and provide shelter from the elements.

Yet the authorities claim the structures also included brick, concrete and other materials intended to create permanence. Authorities say many such illegal constructions have also caused damage to the foundations of the historic walls in some parts.

Avci concedes that erecting those structures might not have been the wisest move, but says it was out of necessity rather than anything else. He denies all claims of damaging the walls and insists that not only have the urban farmers not damaged the walls, but they have also ensured the areas where they were located remained safe.

“All along these walls there are drug addicts and criminal types living in the interiors of the walls and ramparts. But you won’t find anything of the sort along the stretch of wall where we are based. We protect the entire area and serve as a sort of protection force as well,” said Avci.

The city’s walls have become notorious for serving as shelters not only to those down-and-out on their luck, but also to illicit substance abusers and criminals. This situation was thrust into a stark international media spotlight in 2013 after American tourist Serai Sienna was found murdered near a section of the city walls.

The municipality is well aware of the safety issues in the vicinity of the walls, says the municipal official, but points out that it is the responsibility of law enforcement officials to address that particular issue and not something that falls within the municipality’s remit.

“We are aware of the safety issues but we are not about to start praising people for forming their own vigilante protection force. It is the responsibility of law enforcement authorities to deal with that,” he said.

Avci is adamant that they are performing a public service and indicates towards a section of gardens on the inner side of the walls that were demolished by the municipality in July 2013.

“Look at the walls in that area now. It is filled with all sorts of unwanted people. A normal person wouldn’t dare enter those archways and the inner passages of those walls because of all the drug addicts there,” said Avci.

Even though the debate over the future of the Yedikule gardens has ebbed and flowed over the years, the essential issue remains whether farming in such a densely urbanised area is of any significant benefit.

A host of groups - from those promoting organic farming, to environmentalists who see urban farms as a means to reduce carbon footprint, to those opposed to the rapid rate of urbanisation in Istanbul – have rallied behind the urban farmers and are trying to stop their eviction.

Aslihan Demirtas, an architect and environmental activist who is a member of the Initiative to Protect the Yedikule Gardens, says that what these urban farmers do is very specific and unique to Istanbul’s history and world heritage. For this reason she feels the farmers should be left alone.

“For this heritage landscape to remain, the gardeners must remain and continue their practice because they hold the key to this landscape. Only they can upkeep the gardens,” Demirtas told MEE. “Bostancilik (the Turkish term for urban garden farmer) is different than regular farming. It requires the knowledge of working a limited amount of soil with utmost efficiency and in a very fast turnaround in terms of growing and collecting the produce.”

A common sentiment among these groups is that the authorities are blinded by greed and pay scant attention to potential environmental and historical damage. They say past experiences demonstrate that the authorities cannot be trusted in keeping their promise of not turning the area into a construction site in the future.

But municipal authorities believe a lot of this opposition is simply politically motivated and not grounded in scientific truth. The bedrock of the ruling Justice and Development Party’s (AKP) economic success has been based on massive construction and infrastructure projects, which has also created a new wealthy conservative class no longer willing to hide in the shadows.

Battle for the soul of Istanbul

Opponents allege that the AKP government and AKP-run municipalities, like the Istanbul Metropolitan Municipality, are so blinded by greed that they are willing to forego both history and the environment to line the pockets of their supporters.

“We are open to reasonable suggestions based on scientific research. Our mayor, Kadir Topbas, himself rejected a plan for these gardens in 2014 because he deemed them not worthy enough of such a historical legacy,” said the municipal official.

He added: “We are planning a green area, which is also educational as it will include model plots depicting how farming evolved here over time. Many experts advised us that actual farming is not sustainable here due to the pollution levels.”

Yet Demirtas also insists that the produce from the Yedikule gardens is free of toxins and instead of eviction these farmers should be given government support to carry on.

“Two tests have been conducted on the soil and the produce collected from Yedikule, which testify to the cleanness and non-toxicity of the vegetables and soil.”

Ilhan Taninli, a professor of environmental engineering at Istanbul Technical University, says while there is an urgent need to draw attention to environmental neglect in Turkey, he is not of the opinion that the Yedikule gardens are in any way suitable for organic or any form of sustainable farming.

“It is not feasible at all to consider horticulture or organic farming in the Yedikule gardens or elsewhere in Istanbul. The city’s environmental resources such as its water resources, both irrigation and ground water, have been spoiled due to continuous population and urban growth,” Taninli told MEE.

According to Taninli, urban agriculture models have limited positive impact and even when they do, it is only for small semi-urban communities with a maximum population of 200,000.

“It doesn’t make sense to protest the removal of the Yedikule gardens on the basis of benefits of farming and preserving green spaces,” said Taninli. “If you want to protest urban transformation in general, the destruction of an intangible historic fabric or faulty urbanisation planning, then fine, but environmentally the Yedikule gardens is a minor issue.”

However Suna Kafadar, also from the Initiative to Protect the Yedikule Gardens, believes that these urban farmers need to be viewed as the guardians of Istanbul’s farming culture and people who will pass on these skills to future generations.
“These farmers know the land very well. They learned their trade in these gardens and have managed to adapt to the times and conditions,” said Kafadar. “The Yedikule farmers are vital at a time when we are faced with issues involving food security, water resources and other ecological problems. They help show us the way toward procuring clean and fair produce in the future within existing structures.”

End of an era

According to Avci, this is primarily for monetary reasons as attempting to sell retail to local residents in the area makes it financially unviable for them because their profit margins are slim due to the small size of their plots. In selling to wholesalers, they do not face the risk of being left with unsold produce when they sell to them in bulk.

Yet even after selling in bulk, the farmers say they can only turn a profit after multiple harvests. Additionally, he says any stalls they set up to sell their goods are razed by municipal authorities.

“If people want to come and pick their own vegetables to purchase we will be happy to accommodate them,” said Avci. “We just want to continue to be able to work these plots because we have done it for decades and it would be a shame to see all those years of effort and the affinity we have developed for these lands to end so abruptly.”

Avci doesn’t see the municipality changing its plans anytime soon and is resigned to having to move on in March.

While the strange sight of row upon row of farmed land in the heart of Istanbul will no longer exist to confound visitors and will certainly have locals reminiscing about days gone by, for the historical walls of this grand old city, it will be nothing more than another chapter in a story about its ever changing nature.

“I was hoping to be able to pass down this profession to my son in time and establish our own family legacy of sorts beside these walls, but now it seems I will have to look for a new profession myself,” said Avci. “There is no place to farm in this city.”