Regional instability has caused visitor figures to plummet in Jordan, affecting the Bedouin communities of the world heritage site attraction 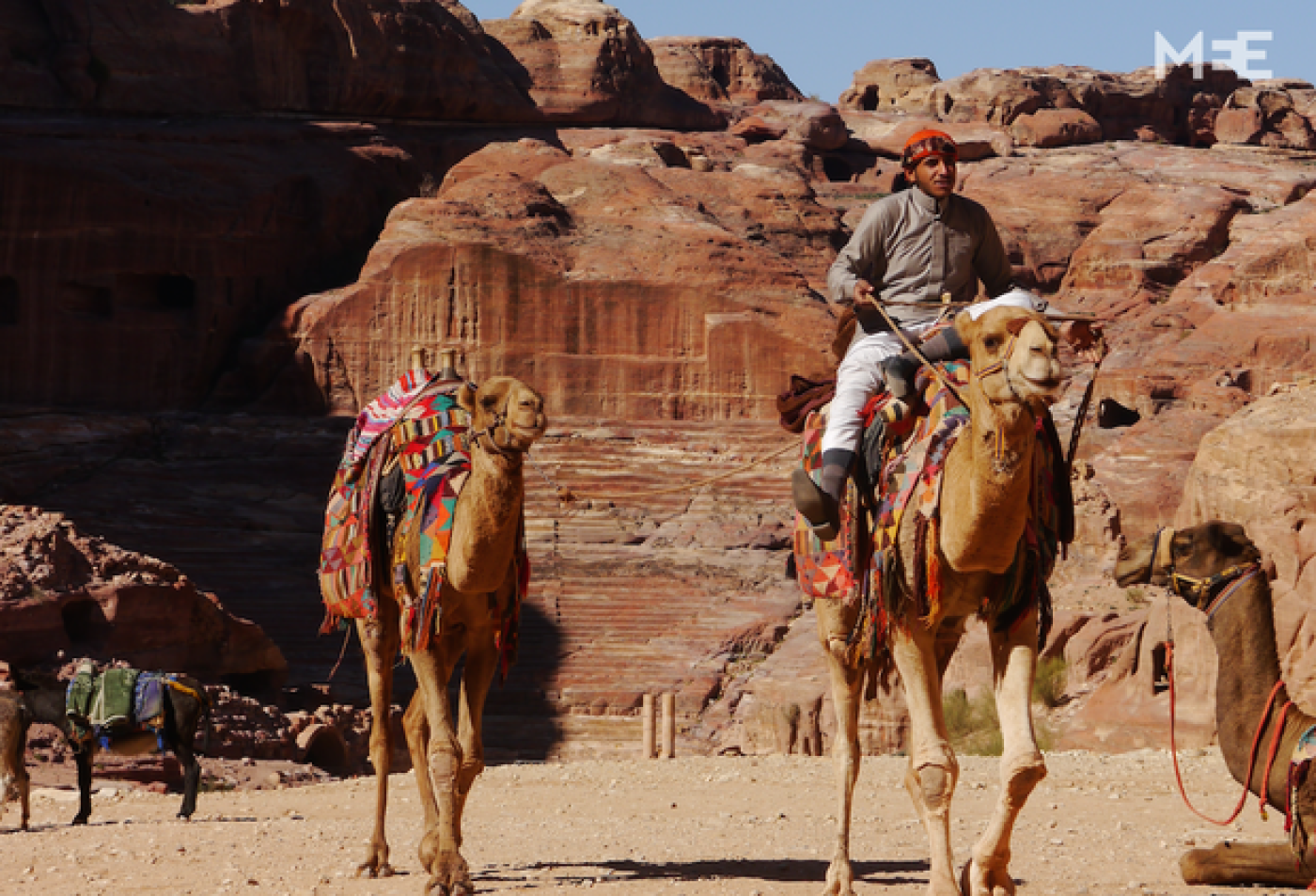 A Bedouin rides a camel through Petra, where some are now returning to living in its caves rather than government-built housing (Photos courtesy of Wanderlass, 'Bedouins of Petra')
By
Megan Hanna

Expecting to squeeze through a selfie-stick-branding rabble, what began as a pleasant surprise turned into a gnawing uneasiness, in an undisturbed amble through Jordan’s famed rose-tinted rock city of Petra. It is usual for numbers to be stinted in January’s low season, but not to this extent.

“Not as many tourists come here anymore,” said a 16-year old Bedouin girl selling camel-tooth necklaces for a couple dinars a piece, her voice echoing across the cavernous hollows. “It is too quiet, and makes life very hard for us living here.” She glumly rearranged her hoard of unsold trinkets spread on a red and white kuffiyeh.

The ancient Nabatean lost city, famously described as being "half as old as time" and carved from mesmeric red sandstone, promotes itself as the archaeological jewel of Jordan and the most visited and iconic tourist attraction in the country.

But business has suffered for the stall holders of Petra and local Bedouin communities, as instability in the region and Islamic State-fuelled fear has led to a rocky tourism sector for Jordan which borders Syria and Iraq.

“My parents were so worried, whilst I told them it was fine I would never have come here unless on an organised tour,” said 23-year-old Shoshana, an American tourist who was visiting Jordan on a two-day schedule with a Jerusalem-based tour agency, but admitted that she was nervous about visiting the Middle Eastern country.

In 2014, tourism generated 14 percent of the Kingdom’s gross domestic product, the equivalent of $4.4bn, and was the second highest earner after remittances from expatriates.

However, tourist numbers halved from 2010 to 2014, and have fallen since then. Tourist numbers to Petra dropped by 32 percent in the first eight months of 2015.

Nuwar Johed, a tour guide who specialised in Petra for 22 years, has witnessed the change the past few years have brought to the site, and the subsequent impact on those who depend on the tourist economy.

“Since 2011 and the beginning of the Syrian war there has been a huge drop in tourism in Petra and Jordan generally,” she explained to MEE. “This is a regional issue, and I think the rise of ISIS in Syria is making a lot of people scared about coming here.”

Jordan’s involvement in the anti-IS coalition gained traction when it increased air strikes against Syrian targets, after militants burned a Jordanian fighter pilot to death in a cage last year.

“Tourism typically brings three billion Jordanian dinars [$4.234bn] into Jordan every year, so this is affecting all of us on a national level, but in terms of the local effect on communities it is having a devastating impact on the Bdoule - local Bedouin,” Johed continued.

The Bdoule around Petra hail from the Huwaitat tribe, who claim to directly descend from the Nabateans and therefore supposedly inherited the ancient city from their ancestors.

However, since UNESCO awarded Petra with world heritage status in 1985, the Jordanian government forced the Bdoule out of the caves and archaeological site to protect it from the effects of encroachment. The government herded the Bdoule into sedentary purpose-built dwellings that formed a "Bedouin village," known as Umm Sayhoun, where most still live today.

Johed confirmed that while most of the Bedouin left, albeit somewhat reluctantly, some refused eviction and approximately 150 remain living in caves.

The return of the last cave dwellers

Tofik Abdullah, 28, a local Bedouin who was trying, unsuccessfully, to hawk camel rides to a pitiful smattering of tourists near the Byzantine church, described how his family moved here hundreds of years ago.

“My family has been in the caves of this area for more than 450 years. They came as nomads with goats, camels and sheep and they followed the land. Their camels found water springs here, and they found grass and then the caves – it is peaceful and so they decided to stay,” he said, sitting astride a camel as he gestured to the rocky terrain enveloping the archaeological ruins.

“We like our historic nomadic life - it is freedom you know? At least it was before the tourism - now the government moved us into a ‘Bedouin village’. But some people, like me, remain in the caves and refuse to move,” he told MEE.

While few resisted the government’s pressure to relocate, more of the Bdoule have begun returning into their historic rock dwellings, partially due to the dramatic drop in tourism but also because of a lack of space for development.

“More people are moving back because in the village we don’t have any more land to build on. We’ve tried talking with the government to ask for more land, but they say it isn’t allowed. I think there are more than 700 families who don’t have houses and are living in cramped conditions with their parents,” explained Abdullah.

While an economic downturn and lack of land implies the existence of pressure behind the decision to return to the caves, Abdullah explained that it was actually a preferable lifestyle option for him.

“I went and lived in Germany for eight months, to try live in the city and the West, but I came back.

"For me, it is a better life than the city, less people, less cars, more natural and free. In the summer, it is cool and in the winter it is warm, the cave is the mirror opposite of the seasons.”

“It does feel more natural and quieter,” agreed Arbaya, 26, who has also decided to live in a cave rather than the cramped government-sponsored housing.

“I was born in a cave; I’ve lived in one all my life. My family have now moved to the village, but I have remained because I prefer it, it is a lot more fun and interesting. You do everything with fire. I have to carry water up to the cave with a donkey, 50 gallons at a time. And food too – we have to carry everything, and I have to wash my clothes with my hands.”

Arbaya explained why young Bdoule men in particular have begun to move back into the caves.

“Men in particular are beginning to take their families back to live in caves. If I want to have children one day and live with my family then I need space. How are your children, and wife, and family supposed to live all together in two rooms?”

When asked about his marital status, Arbaya flashed a mischievous grin. “No wife, still single – no girls want to live in the cave!” he cackled, and then added a little sheepishly: “To be honest I haven’t been trying that hard, one day maybe it will happen.”

“But alongside wanting to start a family, younger people are more interested in coming back to the caves and to get back to their natural way of life and roots,” he added.

A return to the 'old ways'

Johed, the tour guide, identified with the young Bedouins’ impulse to rediscover their heritage. “Over the past two decades I have witnessed a change in Bedouin lifestyles; it has shifted to a more consumer focus, become more material, and moved away from the simpler old traditional ways,” she explained.

“Before tourism exploded in the area the Bdoule had a more diverse economy and specialised in other industries, especially agriculture. But their culture has been changing, and now they are reliant on an influx of tourists.”

Thus, from Johed's perspective, a silver lining to the tourist downturn in Petra is that it seems to be prompting many of the Bedouin to return to their traditional and more economically diverse lifestyles.

“Since tourists came here the Bedouin started making money from them and left their old kind of life, but nowadays they are coming back to it, which is really great, returning to the old ways and keeping the culture alive,” said Arbaya with a youthful excitement.

“Ninety percent of the Bedouins around this area make money from tourism, but nowadays that is breaking down. So many are now changing again, back to breeding racing animals like the old ways. Racing goats, sheep, horses – to sell at the market.”

“My grandparents moved in 1997 from the cave but they used to make yoghurt and cheese and butters. And now people are going back to doing these things. Still, at its heart, the culture of the Bedouin is the same.”

“There is a little bit of change,” he acknowledged, as an afterthought. “Before if there was a problem someone used to fire three shots with a gun in the air and people would come running, whereas now you use your cell phone!” he laughed heartily. “So, maybe, some change is good.” Jordan teen hailed after returning $17,000 of lost cash to owner