The daily news from the Middle East can be hard to swallow, but one website is finding it goes down easier with a dose of comedy 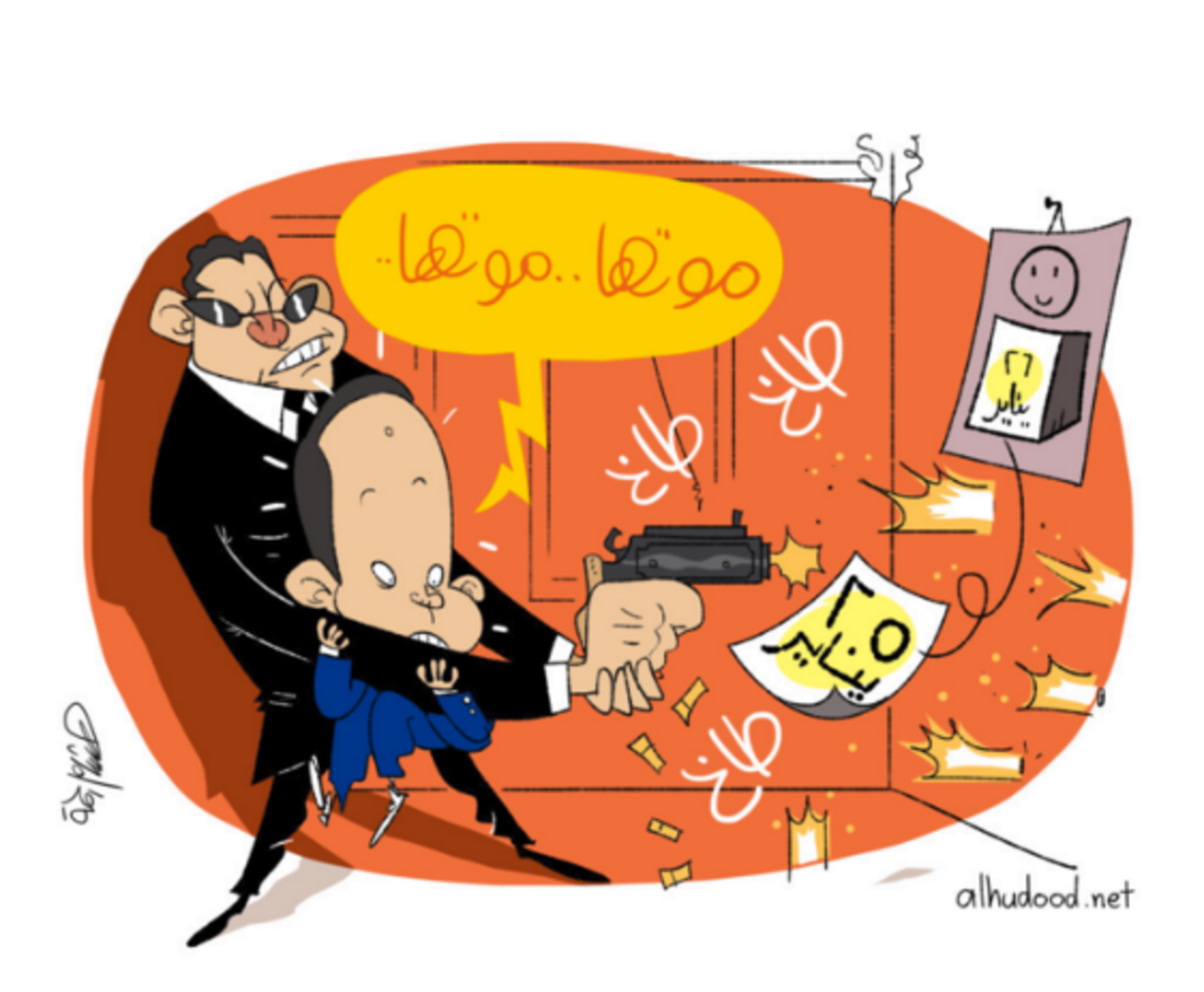 An original Hudood caricature showing Egyptian President Abdel Fattah al-Sisi getting help from a bodyguard to shoot a calendar showing the date of the Egyptian revolution (Photo courtesy of al-Hudood.net)

The playwright George Bernard Shaw once said: “If you want to tell people the truth, make them laugh, otherwise they’ll kill you.” His message was clear, the truth can be hard to bear, but a little humour makes it easier.

There are few regions on Earth where the truth is harder to bear than the Middle East. The daily news of air strikes, suicide bombings and entire cities under siege is more than most people can countenance.

That is why one website has begun packaging the news with a dose of comedy, to get Arabs to engage more with what is happening around them. That website, al-Hudood (The Limits), is a kind of Arabic equivalent of the Onion. It uses satire to reveal serious and often dark realities about the world we live in.

“The whole point of satire is to deliver an idea in a different way, if it’s too difficult or painful to say,” Hudood co-founder Isam Uraiqat told Middle East Eye. “We want to get people to re-see what’s happening around them.”

To do that Hudood’s six staffers - who work from an office in Amman even though the site is registered as a non-profit organisation in London - produce two or three satirical news stories or cartoons a day, using sarcasm, symbolism, metaphor, and other techniques to say the unsayable.

One recent headline on the site was “How to tell your first and second wife apart when taking them to the market.”

Jordanian authorities have arrested journalists recently for as little as a Facebook comment, which is part of why Hudood must be careful. “People always want to know why we’re not in jail yet,” said Kamal Khoury, Hudood’s other co-founder. “It’s because we adhere to certain red lines. We don't offend God or the King."

But there is also a threat from regular people, who might act violently if offended. “With the whole anti-ISIS thing, for example, you just don’t know when someone might decide, ‘This is worth a Charlie Hebdo,’” said Uraiqat.

Hudood has made fun of the Islamic State group on many occasions. One recent headline read, “Authorities reward man for reporting ISIS member hiding inside of him.”

Uraiqat, 32, and Khoury, 30, say they have received a number of death threats from readers since launching the site in the summer of 2013. “Nothing really serious, but it’s a bit disconcerting,” said Uraiqat.

Hudood does not discriminate when choosing its targets: it ribs Jordan’s government and its opposition, Sunnis and Shia, the religious and the secular alike. The idea is, as soon as you leave someone out, you have an agenda.

Deriding religion though is off limits. “The region is too hot-headed,” Uraiqat explained. But Hudood takes free rein in lampooning interpretations of religion that they find absurd. A few weeks ago, for example, the site ran a story titled, “Two-year-old becomes first to wear headscarf out of conviction,” which was designed to poke fun at Muslim parents who dress their children in burkas, not the practice itself of wearing a burka.

For the first year and a half of its life, Hudood did not earn enough to sustain itself. That changed in 2014 when the site was awarded a sizeable grant from the European Endowment for Democracy, a European Union fund that claims to foster democracy in “transition countries”.

Hudood won another grant in 2015 from the Heinrich Boell Foundation, an endowment affiliated with Germany’s left-wing Green Party. The size of the grant was not made available to MEE either by Hudood or by the grant-givers themselves.

The donations were a lifeline for Hudood, which was struggling in part due to companies’ unwillingness to pay for ads. “No one can think of advertising with us. It’s too dangerous,” Uraiqat said. “The government would not be okay with them.”

Though it might be disheartening to some that an independent media outlet cannot survive in Jordan and must rely on foreign countries for help, it can also be a good thing.

“Advertising is a zero-sum game - it won’t lead to independence or sustainability,” said Ramsey George, a new media professional in Amman who has helped set up a number of independent media outlets in the Arab world in the last decade.

“Corporations have interests, and those interests will inevitably interfere” with what Hudood, or any media outlet, is trying to accomplish, said George.

So to stay afloat, Hudood is diversifying its cash flow. Uraiqat and Khoury say they are currently setting up an in-house creative agency to offer copywriting and creative services to the advertising industry.

It is a unique situation, but it seems to be working - for now anyway. Hudood has about 200,000 readers a month, most of whom are young men in Jordan, Egypt, the Palestinian Territories and the United States. That figure has doubled in the past six months, Khoury said.

But it is social media where Hudood reaches its biggest audience: its Facebook page reaches a quarter of a million people a week.

From Jordan to the Arab world and beyond

There is a history of satire being used in the Arab world to skewer political leaders and call attention to hypocrisy and injustice. At least as far back as the Middle Ages, writers and entertainers in the region have used humour as a way to subtly criticise rulers who likely would not tolerate it otherwise.

Today, with the rise of the internet and social media, comedians, spoofers and parody-creators, both amateur and professional have proliferated. Perhaps the best-known among the latter group is Bassem Youssef, whose YouTube series became a hit TV show in Egypt during the reign of Mohamed Morsi.

But in June 2014, Youssef announced that he was ending the programme. “I’m tired of struggling and worrying about my safety and that of my family,” he said at the time.

The termination of Youssef’s show left a void behind it that no one in the region has filled yet. While there are other satirical shows in the Middle East, such as Basmat al-Watan in Lebanon or the YouTube series La Yekhtar in Saudi Arabia, the societal issues these shows tease are typically local, rather than issues a pan-Arab audience can relate to.

Having the entire Arab world in your range presents unique problems, not least the fact that different dialects of Arabic are spoken in different countries. Hudood uses the fus'ha, or formal, Arabic dialect in its articles and cartoons. But still, “there is so much cultural specificity, from Morocco to Algeria and Tunisia to Lebanon, the ways you do humour can be very different,” said Karl Sharro, a Lebanese-Iraqi satirist who writes the blog Karl reMarks.

“Satire has to be woven into the social and political realities [of the country where it’s being done],” Sharro said. “It’s quite a complex and vast area to bridge on every level.”

But if those challenges can be met, the potential is great. In its first year, Hudood restricted its focus to skewering Jordanian culture and politics. That meant its target audience was about three million people, since internet penetration in Jordan - with a population of over seven million people - is around 45 percent. But once Hudood opened up its remit to the whole Arab world, including the diaspora and refugees abroad, its target market ballooned to many times that.

Can political satire make a difference?

Robert Mankoff, the New Yorker’s cartoon editor, has said that the justification for political satire, going all the way back to the time of Aristotle, is to attempt to “laugh folly out of existence”.

But 2,000 years later, there is still just as much bad behaviour among our political leaders as ever.

In other words, satire may be funny, but it does not necessarily change things.

So if Hudood’s purpose is to get Arabs to engage with what is happening in the Middle East, it may be on a fool’s errand. There is little chance that clicking “like” on Facebook is going to bring peace, equality and democracy to one of the most volatile regions in the world. Past research has found that political satire like the Daily Show in the US actually increases cynicism and a lack of willingness to participate in politics.

On the other hand, research in the US has suggested that viewers of the Daily Show and The Colbert Report are more knowledgeable about politics than consumers of traditional news channels like public radio, newspaper websites and cable news shows.

And that is just what Hudood says its job is: to inform the public, not spur them to action.

“We can’t link what we’re writing with the events of history. If people get moving or they don’t, it’s definitely not a piece that we've written that gets people into the streets,” Khoury said.

“Our objective is simply to tell the truth.” Inside Yemen
Political satire lightens the mood in Yemen