Kobane families return to a liberated city, but what awaits them?

In Kobane, returning families are eager to start life again. But without a humanitarian corridor, how can conditions improve? 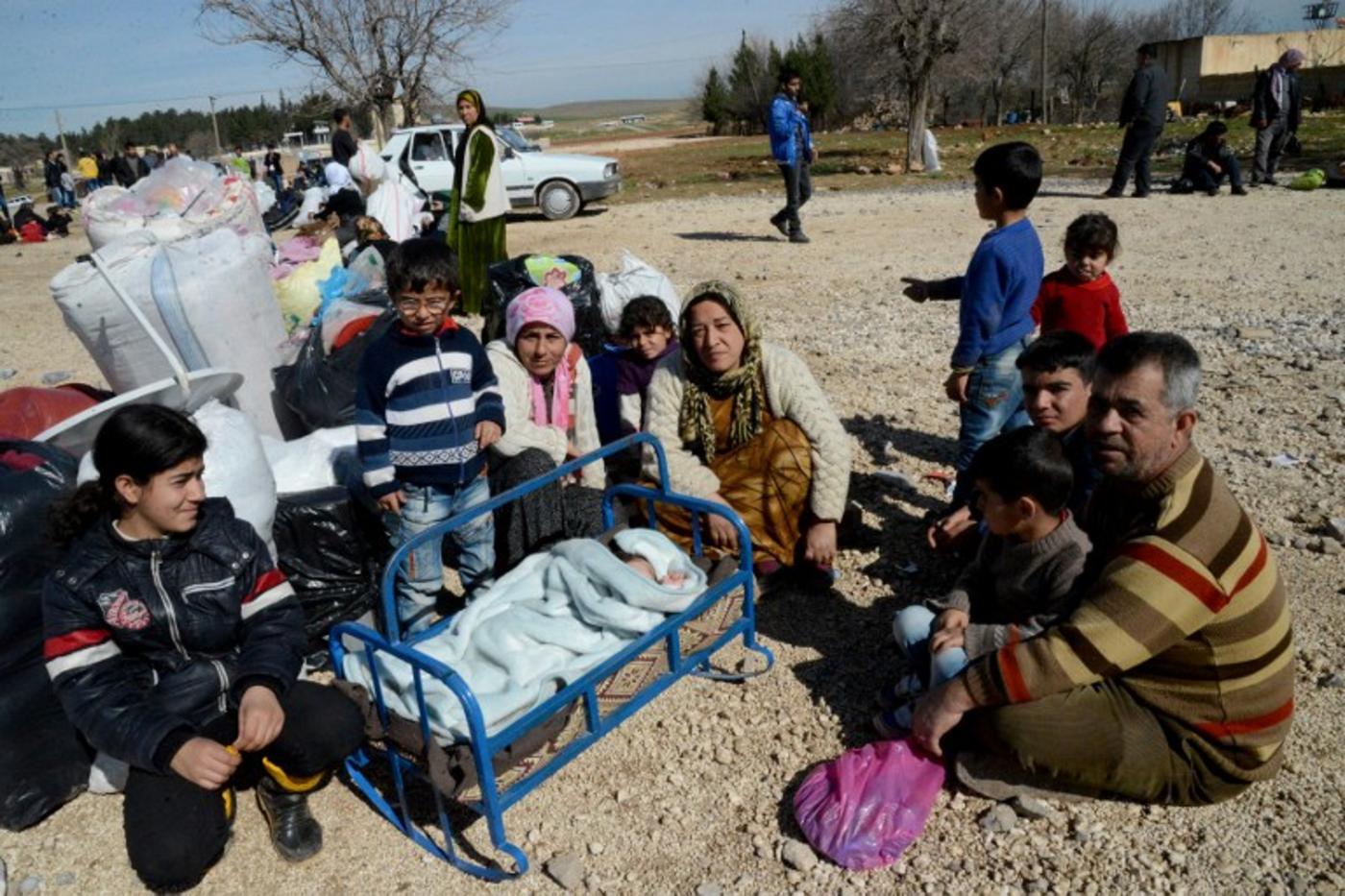 KOBANE, Syria - “I wanted to help in whatever way I could. I didn’t want to run away to Turkey,” insisted Ramadan, a farmer who had to flee his village in early October when Islamic State (IS) mortars hit his home. Instead of joining the mass exodus of refugees fleeing Syria, he decided to stay and help. “Also, my cow was pregnant at the time.”

Ramadan left his ruined village and brought his cow to Kobane, where he set up camp in a scruffy-looking courtyard on the western outskirts of the city. He slept in a cramped storehouse alongside the cow feed. “She gave birth in this house. For me it was a simple choice: The fighters needed milk, and because most of the cows were slaughtered by IS, I realised providing milk would be my way of supporting the resistance.”

The liberation of Kobane was achieved not just by the much-photographed Popular Protection Unit (YPG/J) fighters, but also by numerous acts of determined resistance by men such as Ramadan. These more modest, less glamorous acts of courage defined the battle for Kobane. Some joined the armed resistance, whilst others like Ramadan chose a different kind of fight.

On 27 January, Kobane was successfully liberated. This was followed by a series of YPG successes in the surrounding countryside and, as a result, Kurds have been trickling back into their ruined city. During the bitter battle, as few as 10,000 people remained in the city of its original 200,000-strong population. Now, however, the local Democratic Union Party (PYD) administration report that 35,000 reside in the city.

All returning refugees from Turkey are entering through the only functioning border gate, Murşitpınar. On the Kobane side, local Kurdish YPG forces control the border amidst the rubble. In late November, this gate was the scene of one of the most devastating IS bomb attacks, when several Humvees laden with explosives were detonated simultaneously. Now that the battle has receded, fighters gather here each day, waiting for their families to return.

One woman, returning with her whole family from Turkey, spoke to Middle East Eye (MEE) upon her arrival to Kobane. “This is a very emotional moment. To see Kobane with our own eyes is devastating after so many months. But the destruction of the city is nothing compared to the pain inflicted by the lives we have lost.”

Amid the destruction, however, the arrival of weary citizens was met with elation as well as sorrow. To many fighters, the returning of families to Kobane was a particularly proud moment. One fighter, who welcomed his family after being separated from them for five painful months said, “This is what we have been fighting for. Without love for our children and for our family, we couldn’t have won this battle.”

In the immediate aftermath of the war, the city resembled a ghost town. As the gunfire faded into the distance, an eeriness descended on the rubble. “Things didn't quite feel right at first. Not having to worry about snipers was a relief, but it made us realise how empty the city felt,” Mustafa, a local journalist, said. Within weeks though, the city began to spring to life. Children now play freely on the streets, and their shrieks and laughter have replaced the boom and rattle of mortars and machine guns.

However, the administration of Kobane is struggling to cope with the rising number of citizens. The PYD administration has said that 80 percent of the city lies in ruins. In the central and eastern parts of the city, the destruction is total. The old market place, once the heart of city life, is little more than a heap of rubble. People walk around trying to salvage some of their previous possessions, but almost nothing remains. Worst of all, many have no home to return to.

Idriss Nassan, the deputy foreign minister, fled Kobane in late September and only returned to the city when it was liberated. Whilst sitting in his small home in west Kobane, he explained the situation to MEE:

“Families whose homes have been destroyed are being placed in houses in the villages surrounding Kobane, as well as houses in the cities vacated by the owners who haven't returned.” Nassan stressed how quickly people are returning, claiming that on some days, thousands return at a time.

“We have started preparing a refugee camp on the western outskirts of the city, where 1,000 tents will be constructed for 10,000 people. But with the large influx of refugees returning, we cannot cope without outside help.”

Most villages surrounding the city remain in a deserted, forlorn state with little but IS graffiti and destroyed cars. In some, though, normal life is beginning to return. Hamo, who returned alone but is expecting his family to join him in the coming week, showed MEE around his house. On his porch, an IS warrior had hastily scribbled an ominous message on the wall: “This house belonged to a YPJ fighter who had a Öcalan (de-facto leader of the PKK/YPG) portrait, and who we killed.” Luckily, as Hamo quickly assured us, the fighter - his daughter -  had escaped IS hands and is still fighting on the front line.

Kobane currently has no electricity and a shortage of drinking water. Furthermore, with little entering Kobane, they have limited medical and food supplies. An official working at the storehouse said, “We have had enough food to feed the few thousand who stayed behind to defend the city, but we’re struggling to cope with all the people returning now.”

The eagerness with which citizens have decided to return, despite the fact that little is left in Kobane, is striking.

In Turkey, the pro-Kurdish Democratic Regions Party (DBP) has gone to considerable efforts to make life comfortable for the fleeing Kobane refugees. According to a report released in January, 50,000 refugees have been housed in the Suruç and the neighbouring villages, hosted by sympathetic families. A further 16,000 refugees have been placed in the six refugee camps provided by the DBP party. In the newest of these camps, Şehit Gelhat, children walk in and out of the entrance, playing in the field outside the camp. In the camp headquarters, a hastily constructed concrete block, the administration is currently overseeing the building of a hammam (bathhouse). Volunteers and refugees are working side by side on these projects. A makeshift market has been set up by the residents, and there is a relaxed atmosphere of co-habitation. Children cluster around, demanding that we show off our football skills.

We spoke to one family in temporary tented accommodation about their plans to return to Kobane. “We want to return but unfortunately our home is destroyed," Muhammad said, before showing us photos on his mobile of the rubble where his house had stood. “My brother is a fighter. He sent me these photos.” Muhammad and his family are desperate to return to Kobane but know that, until the city is better equipped, they are better off in Turkey. “The time will come to return but, until help is given to our city, we cannot return.”

An unmistakable feature of Kobane now is the pride with which the fighters and locals alike have in their victory. Here, amongst the pain of the martyrs, the desire for freedom with which the Kurdish fighters fought IS, has prevailed. Nevertheless, four months of fighting has scarred the city, and it is hard to imagine the city being rebuilt until a humanitarian corridor is opened.

“For us, a humanitarian corridor is key,” Nassan emphasised. “We cannot rebuild a whole city when an embargo continues.” The embargo, imposed by Turkey, has restricted the flow of goods in and out of Rojava, of which Kobane is one of three cantons. This began long before Kobane was attacked by IS, and has meant that Kobane has essentially been surviving on what it produced, as well as the small trickle of goods which could be smuggled across the border from Turkey.

“Before the war with ISIS, we struggled but we survived,” one citizen, standing outside his destroyed shop in the old market of Kobane explained. “But now, we need to rebuild the city. We cannot smuggle cement across the border. It is vital that a corridor is opened so that citizens can live in their homeland again.”

Until a humanitarian corridor is opened, the rebuilding of the city cannot begin. A temporary camp is under construction, but more outside help is necessary. Their lives, already severely disrupted by the horrors of the conflict, will continue to be haunted by the war unless a corridor is initiated. “These people are the victims of terrorism and they cannot be punished for wanting to return to Kobane,” Nassan stressed. “So why are they being ignored?”