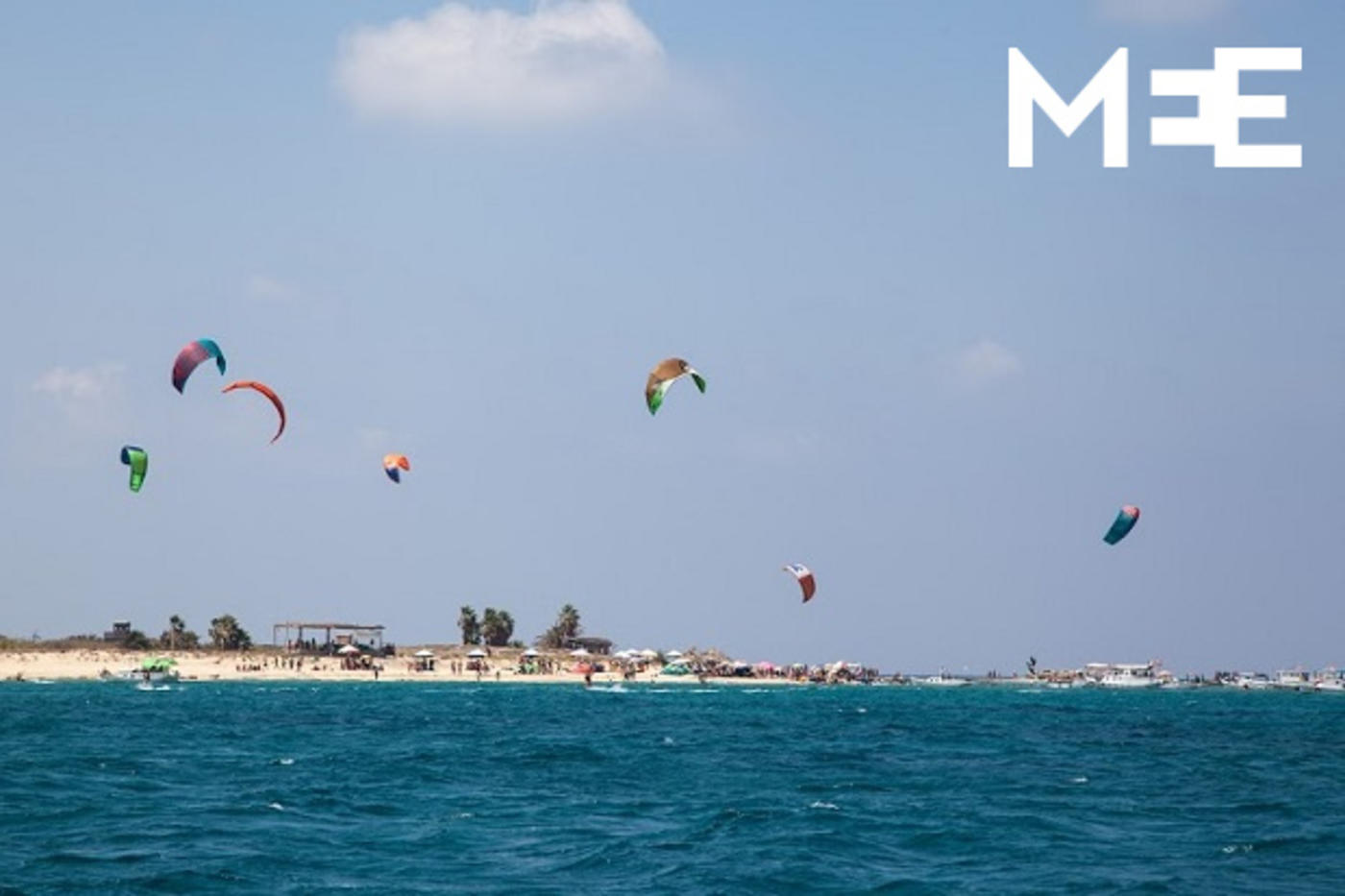 PALM ISLAND, Lebanon - Frequently associated with violence, poverty and sectarian tensions, Tripoli doesn’t seem like the obvious home for an international kiteboarding competition. However, this year the Lebanon Water Festival has brought competitors from across the region to Lebanon’s northern shores to practice their sport in the crystal waters off the coast of Palm Island.

Located just six nautical miles off the coast of the northern port city of Tripoli, the Palm Island Nature Reserve is Lebanon’s only true island chain. It takes about an hour for small fishing boats - brimming with day trippers and local fisherman - to arrive at the shores of the idyllic island, which contains both a public beach and a protected nature reserve known for sea turtles and other unique marine wildlife.

Unlike the often murky, polluted water off the coast of Beirut and other coastal cities on the mainland of Lebanon, the water is turquoise and clear; swimmers and snorkellers can see straight to its rocky bottom. On the beach itself, the sand is fine and white; an eroded limestone, which, in addition to creating a naturally pristine recreational beach, is believed by local fisherman to have healing properties for rheumatism and arthritis.

Today, the kiteboarders breathe new energy into the normally local beach, delighting reclining beach-goers with their stunts as they carve up the crisp waves and get a feel for the wind just off the coast of the island. It feels worlds away from the garbage-choked Lebanese capital. In Beirut the nightly clashes between riot police and protesters, who are demanding an end to the almost two-month rubbish crisis, are making international news. However, despite the vastly different atmosphere, the issues that the protesters are demonstrating against and the problems the festival are trying to combat, are linked in aspiration if not method.

“People in Beirut shouldn’t be protesting in the streets like this,” said 86-year-old Simon Khoury, steering his boat around the island, as photographers aboard capture the kiteboarders’ stunts and the view of the island from the sea.

Khoury is a legendary waterskiing champion for Lebanon, competing in hundreds of shows through the 1950s and 60s. Since retiring from professional competing, he has been a steering figure in the evolution of water sports in the country. Now, as one of the founders of the Lebanese Water Festival, he works to both promote Lebanon’s coastal regions as local and international tourism destinations and the conservation of these coastal areas as natural resources.

Four years ago, the festival began organising international water sports competitions as a means to both draw international tourists to Lebanon, and promote local water recreation and conservation.

“We still have one-and-a-half more months of the tourist season - and now people won’t come, because all they will associate with Lebanon is instability,” he continued. “The protesters should be here, investing in nature - that is how you give back to your country.”

Despite opposing the demonstrations, in a sense Khoury and the Water Festival are asking the same question as the protesters. In a country that has little to no waste management policy - and is renown for littering its coastline and treating its natural resources as a dump - how can citizens save what has been damaged, and conserve what is not?

The state of water conservation in Lebanon

Although Lebanon has signed up to the Barcelona Convention, a regional convention drafted to protect surrounding countries from ships, aircrafts and land-based pollutants in the Mediterranean Sea, Lebanon is far from meeting its targets.

Drafted by 16 different Mediterranean states in 1975, the convention aims to promote sustainable waste management and development of the Mediterranean coast. To do this, it proposes to reduce marine litter, implement proper treatment and disposal of waste water, solid waste, and runoff, and also protect the environment of the coastal region - particularly the protection of wildlife habitats.

In Lebanon, the vast majority of wastewater is currently pumped directly into the coast; only Beirut has water treatment facilities that treat waste water, and separate pollutants, before it is pumped into the sea. Marine litter and solid waste disposal is a significant issue along most of the coastline. Last year, a study of 19 different sites along Lebanon’s coast found water contaminated with fecal matter “well above” international safety standards in seven different locations. Two more sites were categorised as “marginal,” while the remaining 10 were clean.

However, Marwan Rizkallah, a solid waste management expert in Lebanon, believes that the government has committed to the convention, and is making progress in some areas.

“There is some work being done by the government,” he told Middle East Eye. “There is a plan for wastewater treatment plants, and there are some that have been built but are not yet operational.”

Time will tell if this existing infrastructure will have any effect.

In many ways, Palm Island is a microcosm for the potential of waste management and conservation in Lebanon. For one, it is specifically mentioned in the Barcelona Convention as a specially protected Mediterranean area due to its importance for nesting and migratory birds, turtles and seals.

“It is the only place in Lebanon with this diversity of species,” Ghassan Jaradi, a conservation expert and president of the Palm Islands Nature Reserve Committee told MEE.

Second, despite its remote location, it has experienced and recovered from every aspect of Lebanon’s historic and ongoing political instability. When Israel bombed the island in 1984 - alleging that Palestinian Liberation Organisation (PLO) guerrilla fighters were hiding there, using it as a potential base to launch strikes against Israel - the Lebanese Army took control, and spent the next decade cleaning the island of unexploded ordinances.

The island suffered again during the 2006 war with Israel, when Israel bombed the Jiyyeh power plant triggering a massive oil spill that washed over the shores of Palm Island, killing the algae and other marine plant life that the delicate ecosystem depends on for survival. It was an internationally funded clean-up effort, and implementation of a strict monitoring system (partially organised by the UN Environment Programme, which manages the Barcelona Convention protocols) which revived the island this time.

Due to the rigour of the effort, environmental conservation and sustainable waste management systems - such as recycling became priorities for groups working on the island. Unlike many beaches in Lebanon, Palm Island mandates waste separation and recycling. In addition to minimising litter by forbidding potential waste and pollution sources, such as barbecues and grills, there is also a strictly enforced policy that what comes on the island must also leave the island, which is enforced by custodians of the island.

In the event that trash is left behind, these volunteers sort the waste and then bring it to local factories in Tripoli. As a result, the island and the surrounding water remains clean and to the benefit of the Lebanon Water Festival, safe to use for sport.

“We wanted to hold the competition on Rabbit Island [a nickname for Palm Island] to valorise the work that they are doing,” Khoury said.

Two sides of the same coin

Ironically, the popular momentum stirring from the rubbish crisis in Beirut is making the push for water conservation in the rest of the country more, rather than less, challenging. While thousands have marched on Beirut to protest the refuse suffocating the city’s streets for the latter part of the summer, this activism - and urgency towards coming up with a solution for the country’s environmental concerns - has not extended to the coastline, and the water.

“People are just looking at the land, and not realising that what is on the land is also going into the water,” Khoury said.

Rubbish is notorious for being either accidentally and purposefully dumped into Lebanon’s sea. In one example, a mountain of refuse in the southern city of Sidon was recently swept out to sea with such vigour that it washed onto the shores of Cyprus.

For this reason, Khoury has leveraged the Lebanon Water Festival to focus on building communities based around water sports, and international competitions involving water sports with the idea that the more people that are in the water, the more clean beaches and clean water is a necessity. If there are international competitions, Lebanon’s beaches are an ambassador for the country, motivating municipalities to implement cleaning initiatives.

As a solution, the Lebanon Water Festival is hoping that the short-term need of a place to practice sports will lead to a long-term solution for environmental conservation.

Khoury added: “The more people that are in the water, the more of a community we are building that will make these demands.”