The comeback of one of the oldest Arab film festivals in Europe represents Palestine’s rich history and a projection of future memories. 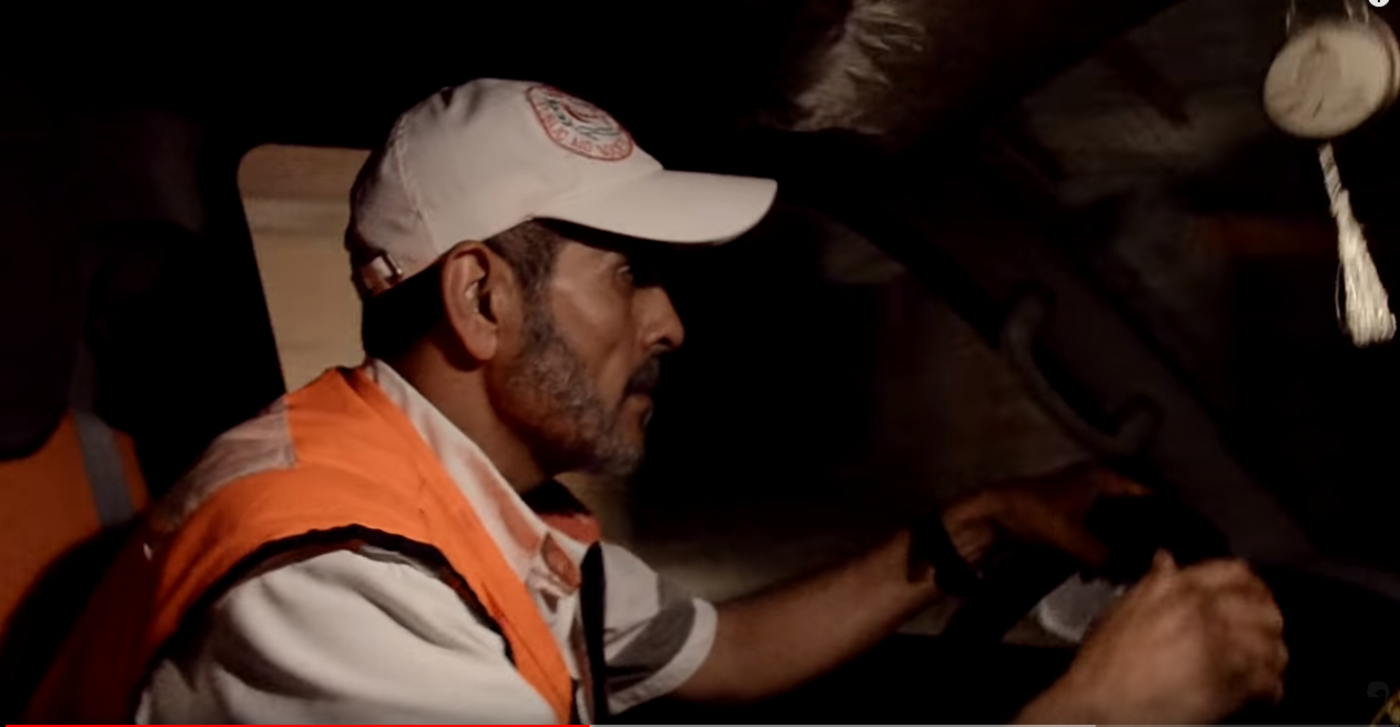 A scene from Mohamed Jabaly’s feature, Ambulance (2016), a first-person account that documents the efforts of a team of ambulance paramedics throughout the 2014 war (Screengrab)
By
Joseph Fahim

LONDON - After a two-year hiatus due to funding issues, the London Palestine Film Festival (LPFF) has made an unexpected comeback. A rich lineup covering the past and present of evolving Palestinian cinema features rare shorts, retrospectives, book discussions and some of the most acclaimed Palestinian films of recent years.

The festival was initiated in 1998 as a student undertaking at London’s School of Oriental and African Studies (SOAS). Throughout the past 20 years, the festival sought to explore different facets of the Palestinian experience, presenting eclectic programmes that combine historical films with the latest highlights of Palestinian film productions, along with a variety of side-activities such as art exhibitions and panel discussions.

Taking place at some of London’s biggest art centres - Barbican, Curzon Soho and the Institute of Contemporary Arts (ICA) among others – this year's edition of the festival boasts an ambitious selection focusing on exile, incarceration and the elusive collective memory of Palestine and Gaza.

Gradually, the inmates start to subject a group of gullible actors to the psychological torture they have undergone, as the line between fact and fiction blurs. Andoni’s daring study of captivity and trauma is, by turns, fascinating, disturbing and haunting. Nearly two years after its release, it remains one of the standout Arab documentaries of the century.

A focus of this year’s edition is stories from Gaza, which has been under an Israeli and Egyptian blockade since 2007. A number of shorts and features shed light on life during Israel’s three main military operations targeting the Gaza Strip between 2008 and 2014.

Given the recent Israeli air strikes that left seven Palestinians dead and the ongoing protests in Gaza where more than 200 Palestinians were killed, these stories feel all the more urgent and timely – achingly familiar narratives of history that continue to repeat themselves.

The programme includes Dina Naser’s short fiction, One Minute (2015), an affecting portrait of a woman’s last minutes before an Israeli raid and Areej Abu Eid’s short documentary, A Very Hot Summer (2016), a personal account of the director’s memories in one hot Ramadan season during the 2014 war.

Mohamed Jabaly’s feature, Ambulance (2016), is a first-person account that documents the efforts of a team of ambulance paramedics throughout the 51 days of the 2014 war.

One of the most distinctive voices presented by LPFF is Danish-Palestinian Mahdi Fleifel, who made a big splash in the festival scene with his 2012 feature-length documentary, A World Not Ours. The film is an intimate look at three generations of exiled Palestinians at Ain al-Hilweh, the largest Palestinian refugee camp in Lebanon.

The festival offers a retrospective of five short films Fleifel directed between 2014 – 2018 that cement his reputation as Palestinian cinema’s contemporary poet of exile.

In Xenos (2014), Fleifel follows a group of young Palestinian migrants from the aforementioned Lebanese camp as they grapple to survive in an economically ravaged Athens.

In A Man Returned (2016), an unofficial sequel to Xenos, the director chronicles the return of one of the migrants to Ain al-Hilweh. Now addled by a heroin addiction, he attempts to forge a new life for himself as the shadow of the Syrian war looms large over the camp.

In 2017, Fleifel directed his first fiction film, the Cannes contender, A Drowning Man; a gritty, uncompromising companion to Xenos about a young Palestinian refugee struggling to cope with the hostility of an alienating Athens.

The most playful of the bunch is I Signed the Petition (2018), a humorous, ironic account of a young Palestinian man mulling over the consequences of signing a petition for the cultural boycott of Israel.

Equally ironic but more bitter is 20 Handshakes for Peace (2014), a dissection of the iconic handshake between Yasser Arafat, Yitzhak Rabin and Bill Clinton on the day of the Oslo Accord on 13 September 1993, juxtaposed with a raging voiceover of Palestinian literary critic and world-renowned scholar Edward Said.

Few other filmmakers have succeeded in evoking the fading memories of Palestine as thoughtfully as experimental director Kamal Aljafari whose debut feature Port of Memory (2010) – an elliptical docu-fiction about Palestinian displacement in Jaffa – is now considered one of the watershed Palestinian films of the decade.

The Berlin-based Aljafari returns to Jaffa with Recollection (2015), a formally inventive document of the port city comprised of footage culled from various resources between 1960 and 1990.

By wiping out the presence of all Israelis in these snippets, Aljafari’s dialogue-free conceptual documentary resurrects the lost Jaffa to a Palestinian populace who no longer have a place in what once was the cultural centre of Palestine. The screening will be followed by a masterclass by Aljafari at SOAS on 18 November.

A different, more straightforward treatment of lost Palestinian memory is explored in Cinema of the Palestinian Revolution, an indispensable programme composed of five restored short documentaries made between 1969 and 1984.

The programme includes Ali Siam’s The Flower of all Cities (1969), a revealing propaganda film showing harmonious Palestinian life in Jordanian-controlled East Jerusalem before the 1967 Israeli occupation.

Mustafa Abu Ali’s Palestine in the Eye (1976) is a record of the life and times of photographer Hani Jawharieh, one of the founding fathers of Palestinian cinema. The film was produced and commissioned by the Palestine Liberation Organization (PLO). Also included in the programme is veteran visual artist Ismail Shammout’s Glow of Memories (1972), a wordless examination of an elderly man who happens to be the subject of one of his paintings.

Sansour envisions herself as the first Palestinian in space in A Space Exodus (2008), in a nod to Stanley Kubrick’s classic 2001: A Space Odyssey that uses Neil Armstrong’s 1969 moon-landing to pose questions about national identity and nationhood.

For Palestine sci-fi film, a fictional future is easier to imagine than reality
Read More »

Nation Estate (2012), Sansour’s most famous work, imagines Palestine as a gigantic skyscraper, trapped in the middle of the occupied land. Meanwhile, In the Future They Ate from The Finest Porcelain (2015) centres on a resistance group, or “narrative terrorists” as they describe themselves, that implant pieces of porcelain imprinted with the traditional keffiyeh graphic pattern in the soil of their homeland for future archaeologists to excavate; an elaborate endeavour to counter the narrative of the occupier.

Other highlights include Mats Grorud’s animated feature, The Tower (2018), an intimate epic anchored by an 11-year-old girl exiled in the Burj al-Barajneh camp in Beirut. The film traces four generations of displaced Palestinians over a span of 70 years.

Samer Salameh’s closing night documentary, 194. Us, Children of the Camp (2017), is an unflinching inspection of the Yarmouk Palestinian camp in Syria from the beginning of the war.

The festival will also present a discussion of the newly released book, Palestinian Cinema in the Days of Revolution, by author and chair of the Department of Asia Studies at the University of North Carolina at Chapel Hill, Nadia Yaqub. All screenings will be followed by Q&As with the directors.

As Palestine once again returns to the headlines, the London Palestine Film Festival provides a valuable portal for humanising a nation and people that continue to be reduced to figures in news bulletins.

The London Palestine Film Festival kicks off on 16 November and concludes on the 28th. Culture
Safar: A journey of discovery into Arab cinema's past and present