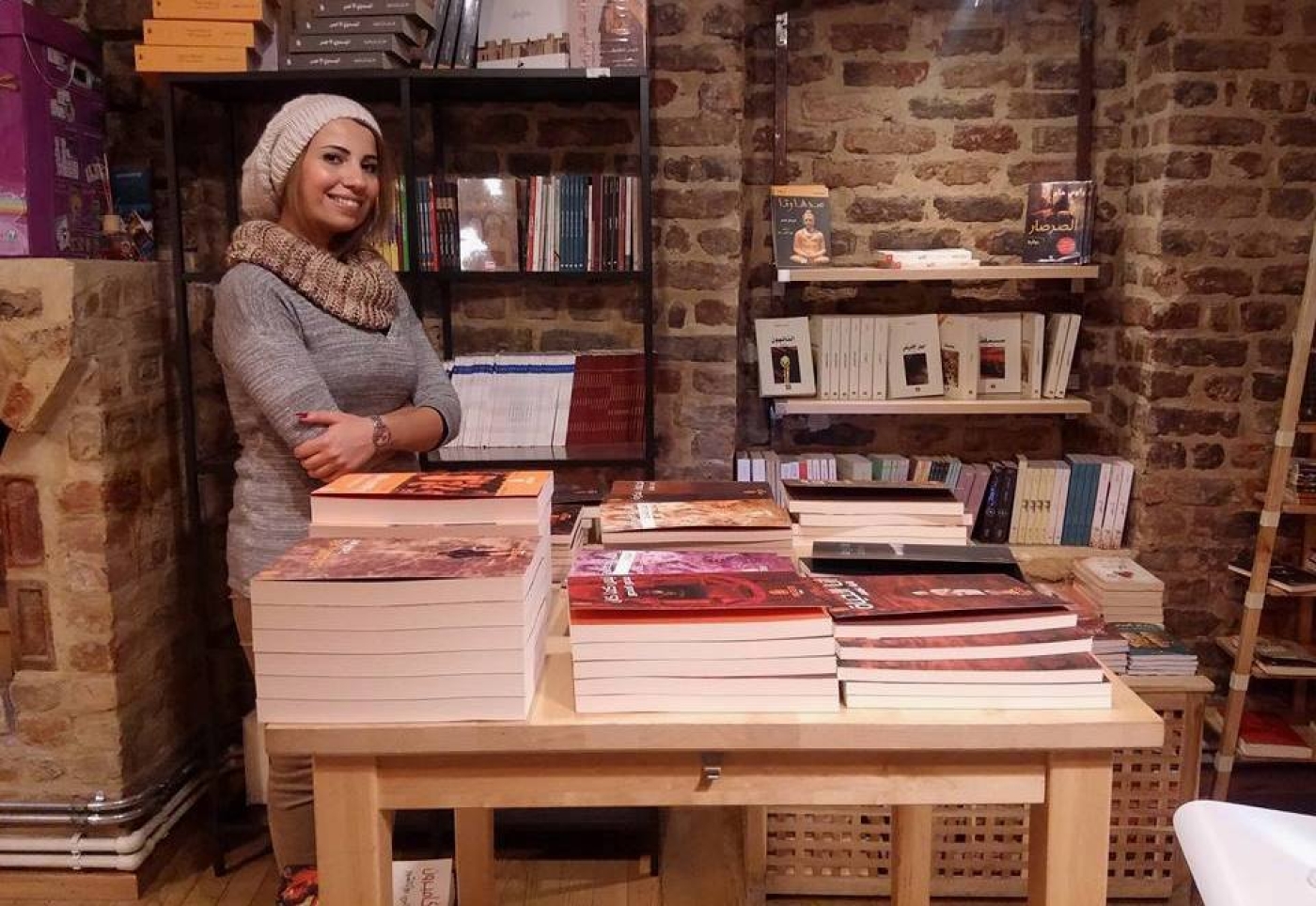 ISTANBUL, Turkey - Tucked behind a narrow cobblestoned side street in the Ayvansaray neighbourhood in Istanbul, a warmly lit bookstore, lined from front to back with Arabic books, has become a special home for Syrian refugees in the city.

Pages is not your typical bookstore. The owner, Samer al-Kadri, left Damascus with his family in 2012, and initiated the project a little more than a year ago to give refugees fleeing violence in Syria a feeling of home.

Kadri, an artist and owner of a publishing company for children’s books in Arabic since 2005, left everything behind in Syria, taking just $3,800 with him and his family to the foreign streets of Istanbul. Now his bookstore offers a space for Syrian writers, artists, intellectuals and musicians to hone their talents, while helping to guide their integration into Turkish society.

According to UNHCR, Turkey hosts more than 2.7 million Syrian refugees of the more than 4.9 million who have also fled to Iraq, Jordan, Lebanon, Egypt and other countries in North Africa. However, UNHCR’s numbers do not include the hundreds of thousands who have sought asylum in European countries, or the many unregistered refugees scattered across Turkey and other countries.

Syrians in Turkey are not provided official refugee status, and are instead considered temporary “guests”. As such, Syrian refugees are not authorised to work in Turkey, leaving many in dismal economic conditions, while forcing others to seek informal work - commonly marked by low wages and poor working conditions.

Although Syrian refugees are not allowed to work officially in Turkey, they are allowed to open up businesses.

‘This place reminds us of the beauty of Syria’

The bookstore has evolved to provide a multitude of activities and services to the Syrian community in Istanbul, all of which are offered free of charge. These include cultural events, art therapy, music and theatre lessons, Turkish and Arabic language classes, and legal seminars translated into Arabic for refugees to help them better understand their rights in the Turkish legal system.

The bookstore also includes a smaller section of English and Turkish books for the Turkish community and international visitors. By selling books, artwork by Syrian artists, coffee and delicious homemade Syrian sweets, the project raises a small amount of funds.

Syrians now flock to the bookstore to read their favourite Arabic writers, listen to Syrian musicians in the evenings, gaze at exhibitions displayed by talented Syrian artists, and participate in seminars on everything from Turkish marriage laws to finding out how to help refugees unite with their families still in Syria.

'People come here because they are reminded of being Syrian in a beautiful way. Not with war, but with life, music, and art'

Kadri’s wife Gulnar Hajou, who co-manages the projects with her husband, says that the bookstore reminds refugees of “the beauty of Syria”.

“People come here because they are reminded of being Syrian in a beautiful way. Not with war, but with life, music, and art,” she said. “It is not normal for any people to see war more than they see life.”

A centre for artists

Kadri says the project, while catering to all people - Syrians, Turkish, and internationals - has especially focused on assisting Syrian musicians, painters, writers, poets, and intellectuals to continue expressing and developing their talents after losing everything to the Syrian war.

“I see the future of Syria in these people, but right now they do not have a future,” Kadri told MEE, as Syrian musicians trickled into the shop to begin setting up their instruments for the evening’s concert.

Bayan Agha, a 28-year-old Syrian refugee from Aleppo, had begun working - casually and unofficially - at Pages just three days earlier. In Syria, she was an architect, but in Turkey she is not allowed to work.

“We need this place,” Agha explained, as she leaned against a pile of books written by several famous Syrian authors. “We are all so lost and depressed. Most of us have been forced to start our lives all over again below zero. We don’t even get to start at zero.”

Agha first started coming to Pages to access Arabic books, something that is near impossible to come by in Istanbul. While her family lives on the outskirts, she moved to the city and now stays with friends in order to be closer to the bookstore.

“This project makes us feel comforted and more peaceful, because here in Istanbul we are strangers to everyone,” she said.

‘We get people to dream again’

Osama Badawe, a 23-year-old musician who fled Aleppo a little more than a year ago, has continued his passion for music through Pages. Back in Syria, he was a professional Oud player, but now he is able to showcase his talents for a new audience at Kadri’s bookstore.

Badawe says the bookstore has served as a cultural centre for the young musician and helped him connect with other Syrian and Turkish artists. He still plays at Pages every Saturday and has provided weekly music lessons for more than a year.

“As a musician, when you play certain songs you begin to remember old things about Syria, [and] many memories come to the surface,” Badawe said, as he was slowly setting up his oud for the show. “And, as I am playing, I can sense in the crowd that they are also remembering these same things about Syria.”

In addition to all of that, Hajou manages art therapy classes every Sunday for Syrian children between the ages of six and 14 to provide the comfort of home as they deal with the distress of war and moving to a foreign place.

“For Syrian children everything is new to them, even the language is new. Many are coming from very difficult circumstances,” Hajou told MEE. “I give them two hours a week where they can live like normal and maintain a positive identity of being Syrian.”

While the sessions work to encourage children to remember and maintain their Syrian identity as they integrate into the Turkish school system, some of the children are unable to attend school and instead must work to help their families in light of the dire economic situation in Turkey.

For these students, Hajou works to provide a feeling of normalcy, while helping them remember their ambitions left in Syria.

The central focus of Hajou’s therapy sessions is to build the children’s “self-trust” and to “encourage them to dream again” since being forced to leave their homes. “We make dream books,” she said. “I have the children close their eyes and dream. Then they draw their dreams. Through these dreams I learn a lot from them, while they begin to see their futures again.”

Hajou has provided these classes for two years, even before the establishment of Pages, and also travels to other parts of Istanbul to provide therapy for Syrian refugees. According to Hajou, the children respond to the therapy sessions quickly, saying that “after two hours at the workshop the children become more happy, optimistic, and they begin to develop themselves in their new home”.

According to Human Rights Watch (HRW), the Turkish education minister reported in April that only 325,000 of the more than 756,000 school-aged Syrian refugees are attending schools in Turkey, despite the Turkish government allowing Syrian refugees to enrol for free in the public schools.

However, HRW underscored that the number of out-of-school Syrian refugees is probably much higher.

‘People come here and they begin to love Syria’

Kadri stressed to MEE that the project was not just designed for Syrians, but also to create a meeting point between Turkish and international people to learn from Syrian culture, while sharing their own.

“The main goal is to have an exchange of culture and ideas,” Kadri said. “We can show the Turkish community the great things from our history, culture and literature, while they can also share with us.”

Kadri says he has invited Turkish people to the bookshop who 'hate Syrians,' but when they come and experience Syrian culture, they 'begin to love Syria'

According to Kadri and his visitors, the Turkish community has responded positively to the project. For Badawe, his music classes and concerts at the bookshop allow him the space to show Turkish society a glimpse into the Syria they are not always able to see. “They love our music,” he said, adding that Turkish musicians have also joined the project to collaborate with the Syrian artists.

Kadri says he has invited Turkish people to the bookshop who “hate Syrians,” but when they come and experience Syrian culture, they “begin to love Syria”.

Both Kadri and Hajou hope that the project will have a small, positive impact on the distressing situation for Syrian refugees in Turkey, with plans to recreate the bookshop in Berlin and the United States.

Kadri tells MEE that their message is simple: “Let’s not judge each other before we know each other. And once we take the time to know one another, our vision for the future will be different.” 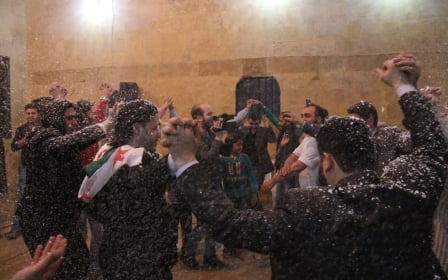 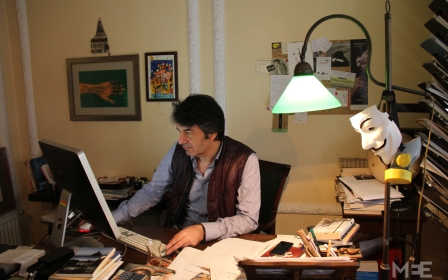