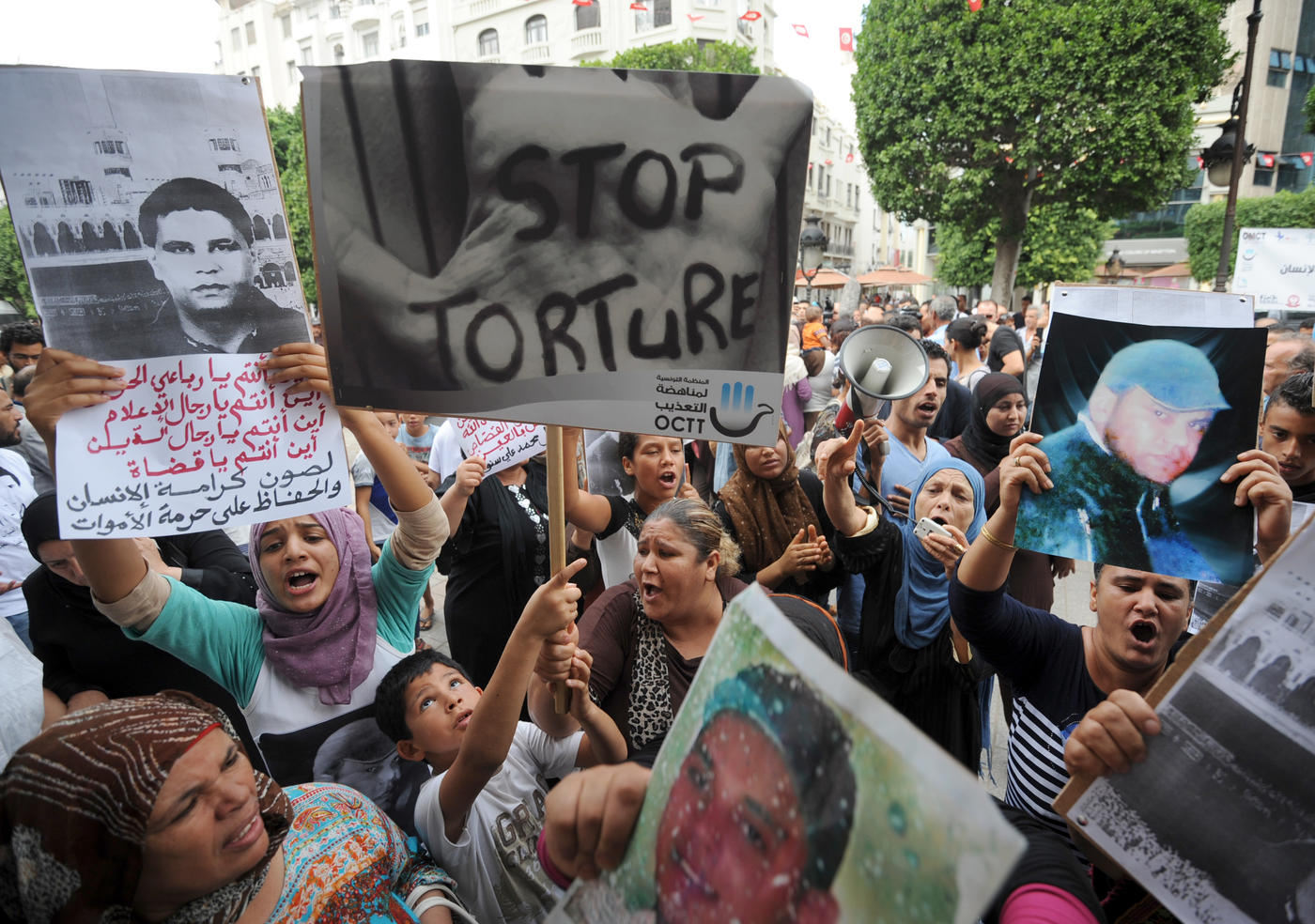 Tunisian protesters denounce the use of torture and call for reform of the Tunisian police, at the headquarters of the Ministry of Interior in Tunis on 15 October, 2014 (AFP)
By
Patrick O. Strickland

TUNIS – Lina Ben Mhenni has had to travel with state-provided security since her life was threatened earlier this year. A professor of linguistics and political blogger, the 31-year-old’s advocacy for democracy and social justice landed her in the crosshairs of Ansar al-Sharia, a militant Salafist organisation operating in Tunisia.

Yet it was police officers - the very institution supposed to protect her - that attacked her most recently on 30 August, while she was on family vacation on the Tunisian island of Djerba.

Attacks on Ben Mhenni and others are part of a broader trend of police brutality and human rights violations that Tunisia has struggled to cope with since the 2011 revolution, when nationwide protests ousted US-backed autocrat and President Zine Al Abdine Ben Ali, who had ruled the country for 23 years with an iron fist.

Now, as the country approaches its parliamentary elections, Ben Mhenni fears that candidates’ hesitancy to tackle police violence and torture threatens the freedoms won since the revolution.

“None of the candidates are dealing with this,” she told Middle East Eye. “They are praising the security forces for taking on terrorism, but it’s dangerous to ignore these human rights violations happening at the same time.”

Despite a new constitution, adopted in January, which “protects many fundamental human rights and is a very positive step”, there are still regular reports “of torture or other ill-treatment, deaths in [police] custody and the use of excessive force by the police, and impunity for such human rights violations is still the norm,” according to Amnesty International researcher Benedicte Goderiaux.

As Tunisians press on in their struggle to build a strong civil society and democratise, “Victims of past human rights violations, human rights lawyers and civil society organisations are obviously very disappointed that impunity for the security forces in particular, remains almost complete,” Goderiaux told Middle East Eye.

Sitting across from her plain-clothed bodyguard on a hotel rooftop in the capital, Ben Mhenni recalled the assault on her. Every few moments the bodyguard, his handgun protruding slightly from under his shirt, scans the surrounding patrons.

The attack took place when her bodyguard (a member of the police forces) entered the local police station to coordinate security procedures for her stay. “Police officers came up to the car and demanded that I move it,” she told Middle East Eye.

“When I told them I couldn’t because I was waiting for my security, they cursed at me and asked me who I think I am,” she said.

The officers proceeded to pull her forcefully from the parked vehicle, slapping her repeatedly and kicking her once she fell to the ground. Ben Mhenni, who has previous health issues, including undergoing a liver transplant in her past, believes her attackers targeted her for her activism and vocal criticisms of police torture.

“My bodyguard came outside after he heard me screaming, but the officers separated us and attacked him also,” she said. “The police chief eventually intervened and stopped the attack.”

“Then while I was filling out a complaint in his office,” she said, “my parents were attacked outside when trying to enter the police station.”

Officers cursed at her mother, while her father, a political activist who spent years in Tunisian jails, was punched and beaten.

Her assault is not an isolated event. Torture and police brutality have been widely denounced by Tunisian and international human rights organisations, but the government argues that the country is struggling against a growing trend of terrorism and militancy.

Slim Chaker, a senior official in Nidaa Tounes, the country’s largest secular party, argued that security forces “need better technology so that they do not have to resort to certain practices,” such as torture.

“Tunisia shouldn’t use torture,” he told Middle East Eye, “but police need to be provided with better resources for handling security threats and terrorism.”

Yet many cases raise doubts about the alleged correlation between human rights violations and anti-terrorism measures.

On 3 October, Mohamed Ali Snoussi, 32, died in police custody, prompting accusations of torture. Three witnesses told Human Rights Watch that “police officers stripped him naked, beat and sexually humiliated him, and threatened him in full public view, then took him away.” He died a few days later after being transferred to a nearby hospital.

Yet Amna Guellali, a Tunisian researcher for Human Rights Watch, explained that there is a “clear pattern of impunity” among the country’s security forces. Since the time of the revolution, “there are very few cases that went to court and go through the legal process.”

According to Guellali, taking on impunity “starts with a very basic but very important step: legislation that guarantees a detainee access to a lawyer from the beginning of their detention.”

“For a period of six days, the police can hold someone without any access to a lawyer,” she told Middle East Eye. “There needs to be reform so that judicial police are transferred from the Ministry of Interior to the Ministry of Justice. Because now the same body that allegedly commits violations is also investigating it.”

The Ministry of Interior, responsible for police investigations, failed to reply to email requests for a comment on this article.

“The Ministry of Interior is perhaps the most opaque of our ministries,” said Ommezine Khelifa, 32, a member of the left-leaning Ettakatol party and legislative candidate in the country’s capital. “We didn’t see reforms taking place, even though we kept hearing about reforms being announced.”

Over the past three and a half years, belief in democratic governance has plummeted. According to a new Pew poll, which interviewed 1,000 Tunisians, less than half “believe that democracy is preferable to any other kind of government.”

“The whole challenge to bring more trust is to make them respect human rights and liberty in order to represent the law accurately [and] not differentiate between Tunisians in its application,” Khelifa explained.

“If anything happens to suspects while under police custody, people should see that process in public,” she added. “When there is clear case of torture, people need to see that the responsible parties are taken to court, including the hierarchy that issued the order. We shouldn’t have to question the process.”

As Tunisia faces an increasing threat of militant activity on the country’s borders with Algeria and Libya, human rights groups and activists worry that security forces have been given a freer hand to target political activists and to launch random arrest campaigns.

Ghassen Hamdani, a 23-year-old engineering student and rapper who goes by the name Ghost Man, fell victim to what he claims was a random arrest campaign in his hometown of El-Kef, a city in northwestern Tunisia. Sitting in his living room, he rolled a cigarette and recounted his arrest.

After a series of militant attacks in areas straddling the country’s eastern border this summer, Hamdani, who describes himself as “not particularly religious”, went to pray at the local neighbourhood mosque with his 65-year-old father on 20 July, during the Islamic holy month of Ramadan.

Government officials announced to local media outlets that they arrested 63 “terror suspects” across the country, including Hamdani and others who were apprehended in El-Kef.

“All of a sudden police busted in the mosque during prayers,” he told Middle East Eye. “They had guns with lasers, and other officers outside were firing bullets in the air.”

Though most of the worshippers fled, seven were detained, including Hamdani and his father. He claims an officer kicked him on the back of his shoulder although he was cooperating. “The whole reason I didn’t run is because I didn’t do anything bad.”

After being held for six days, he was informed that he would face charges related to terrorism and would spend at least 30 years in prison if convicted. “I was shocked,” he said. “I thought my life was over.”

“I am an artist and a student, a peaceful person,” he explained, making peace signs with both hands and continuing his story.

Hamdan says he was beaten and denied food on several occasions. “If the guards heard you complaining, they would come and beat you.”

Meanwhile, his older brother led a local campaign calling for his release. Facing increasing pressure from the local community, the police dropped the charges against Hamdani and his father, allowing them to go home after 15 days in detention.

“As far as I know, the others who were arrested are still in jail,” Hamdani lamented. “Who knows how many people we’ve been told are terrorists were just normal citizens?”

When asked if he thought the upcoming elections could usher in a period of change and police reform, Hamdani said: “I used to watch the news and say ‘thank God’ when they reported on the arrest of terrorists. Today, I am not even sure what that means anymore.”

“The police haven’t changed at all since the time of Ben Ali, and I think it’ll get worse,” he concluded.

With the police enjoying an 82 percent approval rating and the military 95 percent, there is no indication that police brutality; the targeting of influential activists or random arrests will slow down anytime soon. 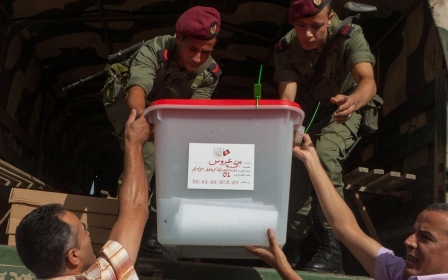 Tunisia Votes
Tunisia struggles with security ahead of elections 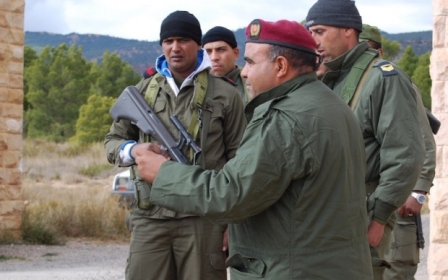 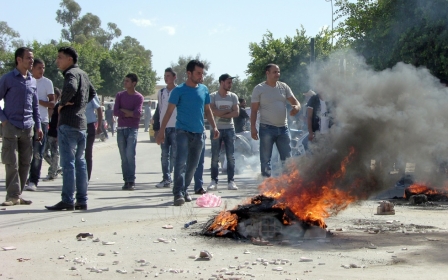