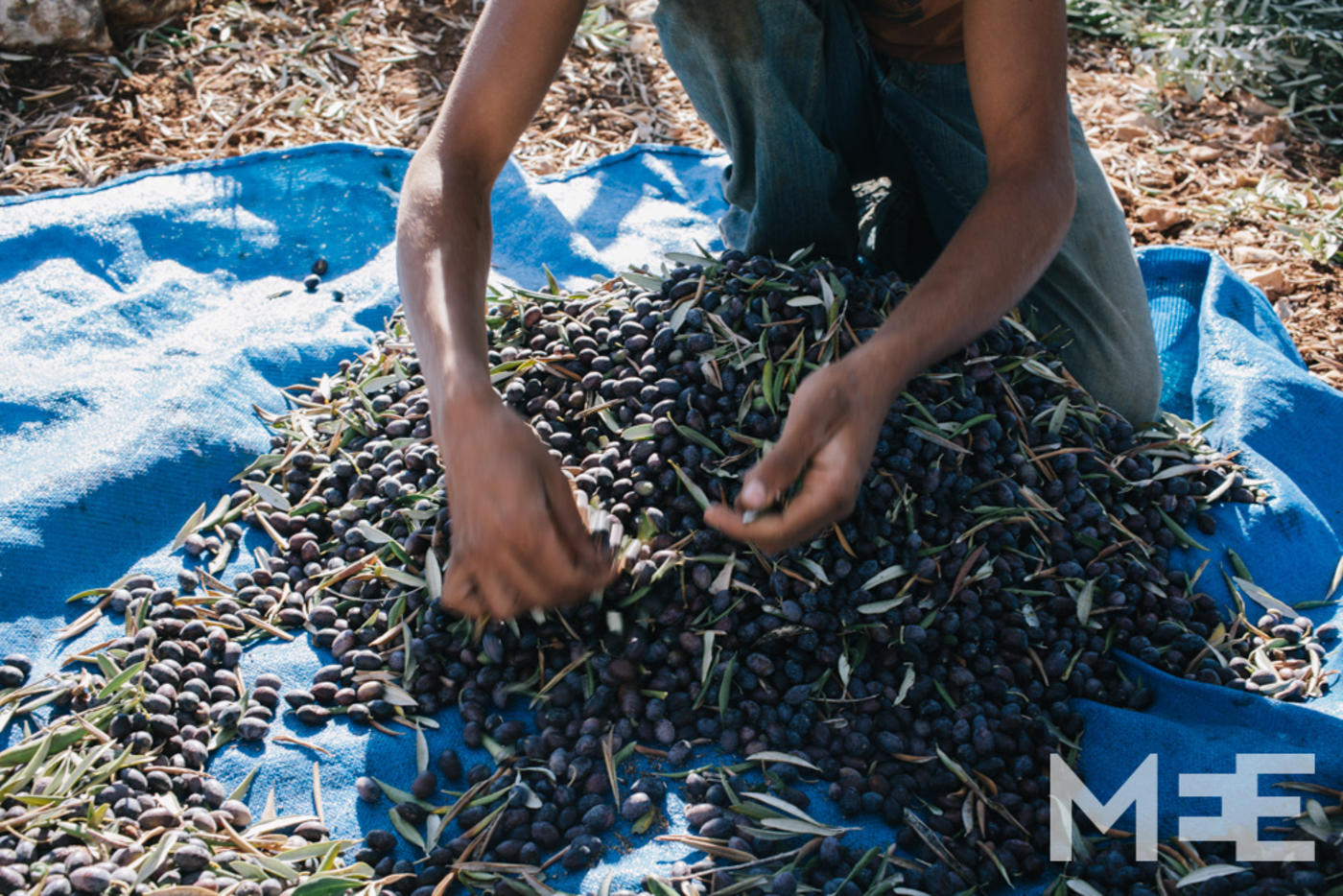 Olives are gone through by hand to remove leaves and twigs after they are picked, Jamma'in, West Bank (MEE/Daniel Tepper)
By
Daniel Tepper

WEST BANK – The sun was still rising, but Emad Haj Ali and almost a dozen of his family members were already hard at work harvesting olives. Men and women, both young and old converged on a single olive tree, pulling olives off by hand and with plastic combs. There was a constant patter as olives hit plastic tarps that were splayed out underneath the tree to catch the falling fruit.

Haj Ali and his family own 1000 trees in a grove that lies in the hills outside of town, near the Israeli Settlement of Kfar Tapuach. Over the next month they will pick over 10,000 kilograms of olives. Most will be turned into oil, some will be preserved and sold whole. It is a vital source of income for Haj Ali’s family who rely on various construction, labour and farming jobs during the rest of the year.

According to 2012 figures from the United Nations, almost half of the arable land in the West Bank and Gaza is used to grow eight milling olive trees and the oil they provide helps support around 80,000 Palestinian families.

The harvest is of great cultural importance for Palestinian communities, providing a month-long celebration of work and bonding with their land and one another. It is a tradition that has been passed down through the generations in Haj Ali’s family, like most Palestinians gathering olives this month.  The olive tree has come to symbolise the Palestinian people; steadfast and able to thrive in the face of adversity, deeply rooted in their land.

Haj Ali points to a tree that he said his family has been harvesting olives from since his grandfather’s time, “I feel love and sympathy (for the trees). This one is 100 years old.”

Haj Ali’s family does not require a permit from the Israelis to access their grove, but their trees lie in Area C, a restrictive zone under full Israeli control that covers 60 percent of the West Bank, so they are only allowed on this land during the harvest season. They work with determined speed, moving from one tree to the next, stripping the olives and afterwards, pruning branching and tending to the ground around the trees.

Israel’s systematic restrictions imposed against Palestinians farmers, which include special permits, agricultural gates, and indifference in the face of settler attacks, have made it increasingly difficult over the years to earn a living and for those with olive trees to enjoy this special time of the harvest. Serious incidents that have occurred this year include dozens of olive trees being cut down around Nablus. Palestinians working in their groves were attacked by settlers in the town of Yanoun, also near Nablus.

Four volunteers from the group Rabbis for Human Rights (RHR) accompanied Palestinians on Monday, 6 October, on what will be one of the many times the group will accompany them this month. RHR is a group that describes itself as the only Israeli rabbinic organisation working to further human rights inside Israel and within the occupied territories. RHR will send out teams - made up of both Jewish Israelis and an assortment of internationals from different religious groups - to assist Palestinians during the harvest season.

The volunteers, two Americans and two Israelis - all of them Jewish - were here to help pick olives side by side with the Palestinians. Because the volunteers were present, it was decided that the group would spend the day harvesting olives that grow close to an area where a settler was building a dwelling for himself - only 50 metres from the edge of the grove.

The bare-backed settler busied himself, hammering wooden planks together as he constructed a shack-like structure, well outside the barbed-wire fence of the Tapuach settlement, about a kilometre away. He paused to shout at a volunteer he spotted taking pictures from the edge of the grove. First in Hebrew then in English he yelled, “Are you looking for trouble? Stop taking pictures!” The volunteer retreated back into the grove, not wanting to provoke the man further.

In situations like these, RHR’s policy is to avoid confrontation with settlers, mainly for fear of retribution that could be exacted on the local Palestinians once the volunteers

have left. If an altercation is inevitable, RHR workers are instructed to call the authorities, and if all else fails, to act as human shields for the Palestinians.

Working together for over a decade

Founded in 1988, during the first Intifada, RHR started out working primarily for Palestinian human rights, but over the years, has extended its scope to assist foreign migrant workers, Bedouins facing displacement and economically disenfranchised Israelis. The group states it motivation on its website that, “as Jews, we are obligated to protest against every injustice enacted against any other person…that man and woman was created in God’s image. We believe that it is our obligation to inform the Israeli public about human rights violations, and that it is our role to pressure state institutions to fix these injustices.”

The group’s current president, Rabbi Arik Ascherman, started working with Palestinians harvesting olives during the second Intifada, in 2001, at a time when dialogue between Palestinians and Israeli activists was at an all-time low. Palestinians from the town of Hares reached out to Rabbi Ascherman, and together they organised a trip for Israelis to accompany Palestinians picking olives. It was the first major joint activity between the two groups during the second Intifada, and they have been going back every year since then.

Today there are many Israeli groups who work with Palestinians during the olive harvest, but Rabbi Ascherman points to some of the accomplishments that RHR has made over the years that have helped Palestinians farmers in small ways.

RHR, along with the nine other human rights organisations have brought the plight of Palestinian olive farmers to the attention of the Israeli supreme court. Rabbi Ascherman described that in 2006, the court made a ruling, “that to this day very much defines what the army's obligation are in terms of Palestinian agriculture, the army [must] allow and protect Palestinians to get to every single tree that they own.” This was a big success for the Palestinian farmers, Ascherman says, but in the years since, Israeli authorities have “created a whole system of [restricted] areas, particular during the harvest. There are areas where [Palestinians] can't enter without coordination [and] there are much larger areas where Palestinians can go but Israelis and internationals aren't allowed.”

Today’s struggles involve coordinating with the army to allow Palestinians access to their land and keep pressure on the authorities to actively prevent tree-destruction and assaults at the hands of Israeli settlers.

But Rabbi Ascherman admits that working with the authorities is an uphill struggle: “We've been dealing with soldiers not doing their jobs, either expelling people where they shouldn’t have or [allowing] violent attacks. It's very difficult and almost no one has been brought to justice over the years... We've succeeded in bringing about some modicum of justice and we need to protect and expand [on that].”

Dialogue of the olive groves

Rabbi Ascherman believes his group’s activities during the olive harvest help promote vital and rare dialogue between Palestinians and Israelis. Ascherman points out that, “There’s almost no other opportunities for average Israelis and Palestinians to meet and communicate with each other.” In what he calls “the dialogue of the olive groves,” he sees the outings RHR organises during the harvest as a way to break down stereotypes and foster communication between the two groups who often have very little interaction with each other.

“Justice and peace are big concepts but they start out of very concrete things,” Rabbi Ascherman said. He points to the joint harvesting sessions which, in a small way, he sees building a better future between Palestinians and Israelis, “olive by olive.”

Back in the grove, in Jamma’in, the Palestinians and the volunteers took a lunch break. Netanya Ginsberg, a 75 year-old Israeli who has been volunteering with RHR on the olive harvests for over ten years, sat on the ground and joked with Palestinians in Arabic as they ate. Ms. Ginsberg and Haj Ali are both pessimistic about the future for Palestinians in the West Bank. But the dialogue of the olive groves could be seen here, in action. The Palestinians and volunteers sitting together, chatting and eating from the same plates, then smoking cigarettes and sipping coffee before getting up and continuing with the harvest. 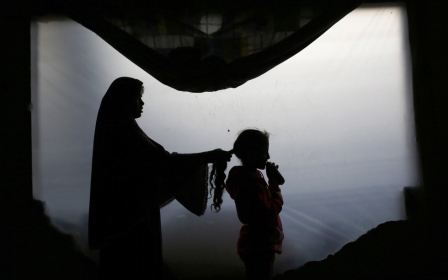