In Rafah, a tale of two cities

Egypt’s decision to raze Rafah city in Sinai, in order to establish a buffer zone with the besieged Gaza Strip, will tear families apart 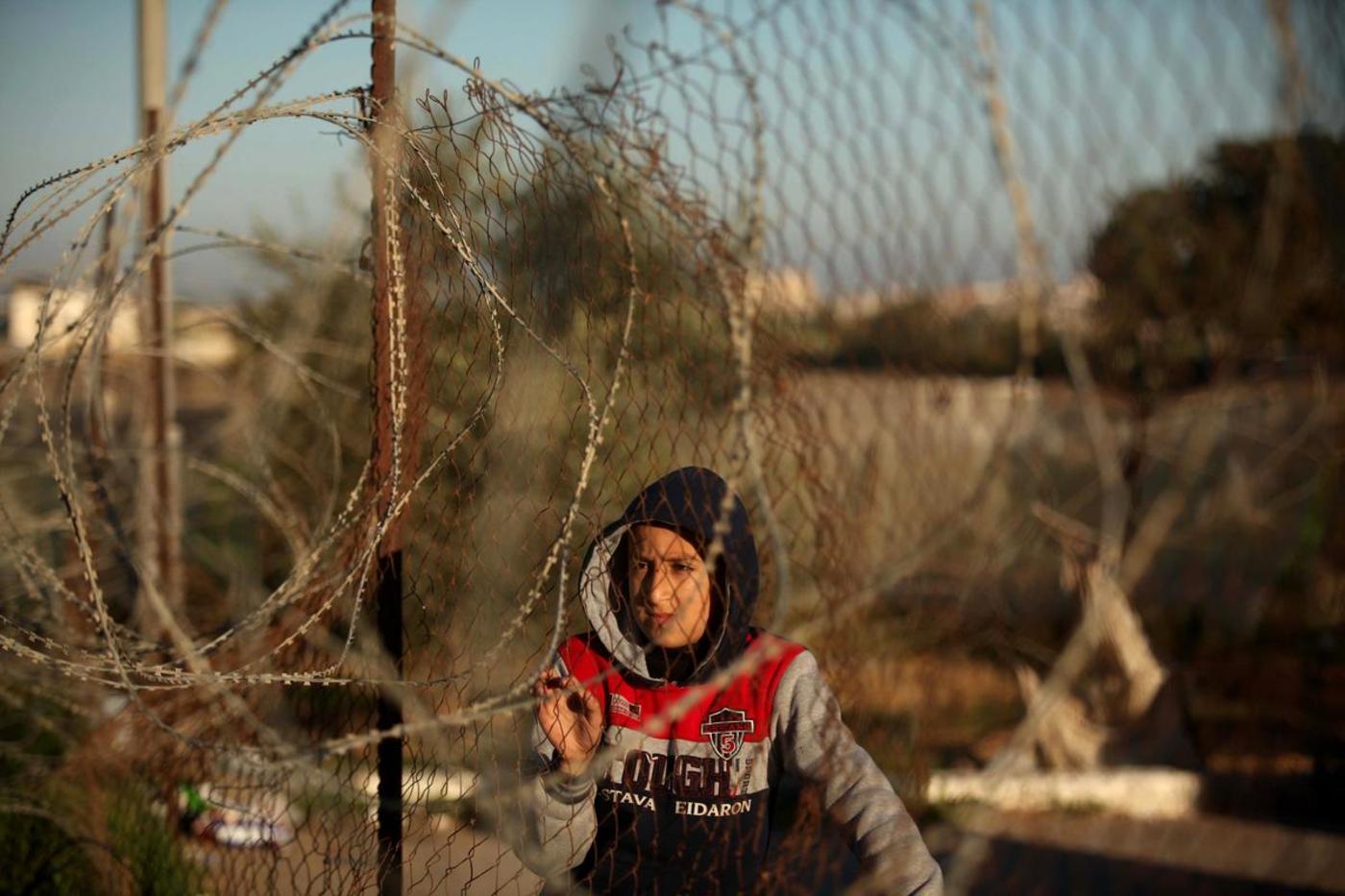 A child waits to cross into Egypt at the Rafah border gate, Gaza's main window to the world (AA)
By
Mohammed Omer

RAFAH – On the Gazan side of this divided city, Etaf Barhoum, standing on a hill made of homes destroyed in previous wars, waves with one hand to her cousin, Abdullah, her other hand clutching a phone so she can hear his voice.

Several hundred metres away, separated by a wall and under the watchful eyes of an Egyptian soldier with a Kalashnikov in a watchtower, he waves back as another gust of gritty wind blows across the border.

It may be the last time the cousins see one another.

Rafah is essentially two cities, divided by a barricade of barbed wire, metal panels and concrete built in stages after the 1967 war. One city was built by the Israelis who occupied the Gaza Strip, the other by Egypt’s military, who are now evacuating the farming town, stage by stage, to tear Rafah down.

“It is a difficult moment for me, to see my family being separated and forced to leave again, by a political decision,” said Etaf, a 54-year-old mother.

The razing of a city

The beginning of the end of Egypt’s Rafah started after high-profile attacks in the Sinai Peninsula killed 33 security personnel on 24 October. A day later, President Abdel Fattah el-Sisi, in a televised speech, said “the problem of Rafah and the Rafah border line” would be tackled.

Within weeks, the Egyptian military began evacuating hundreds of Egyptian families from their homes in Rafah. Around 800 homes were destroyed and a 500-metre area along 13 miles of the border between Gaza and Egypt was cleared. Top security officials said the aim was to create a buffer zone to prevent weapons and militants from being smuggled across the border. Then, earlier this month, Abdel Fattah Harhoor, governor of North Sinai, said that all of Rafah would be destroyed.

Palestinians say the eradication of Rafah and widening of the buffer zone makes them feel more isolated than ever before. It will become impossible to dig long enough tunnels; these have been the main import route for food, spare parts and furniture, and an escape hatch for blockaded Gazans.

But the consequences will not only be the homelessness of hundreds of Rafah residents or the loss of an underground economic engine. Palestinian families like the Barhoums, whose 4,000-strong clan were separated by the 1967 wall and have straddled this border ever since, half as Palestinians and half as second-class Egyptian nationals, will be split even further.

On the Gaza side, a de facto Palestinian official unauthorised to speak to the media admitted that he came across this type of family connection often. He recalled one dawn during Ramadan, the holy month of fasting.

“When the tunnels were open, hot meals were coming through, and once I saw beans with tomato sauce passing from the Gaza side to relatives on the Egyptian side,” he said, laughing. “A family meal of beans is not a security threat so we allowed it.”

“We have lived together, listening to the same call for prayers, the same echoes of Israeli bullets and shooting,” Abdullah told Middle East Eye over Etaf’s phone. “We lived through the 51-day war with our family, minute by minute - listening to their radio and watching their TV - during Eid, we listen to their prayers and they listen to ours.

“This is a forced migration - ripping out the roots of our social fabric, deliberately.”

In recent weeks, Egyptian soldiers went door-to-door in Rafah to inform affected residents that their houses were slated for destruction. As with other residents, Abdullah said when they came to his home the soldiers offered him financial compensation.

“We will be offered 100 Egyptian pounds ($US13) for each square metre of the house structure,” he said.

Agricultural land around the home, where Abdullah farmed fruit trees, will not be compensated, though the government will pay 200 Egyptian pounds ($US27) for each tree. Security personnel have already uprooted many of the trees as they took control of the land in recent weeks, though his house still stands for now.

“Those who destroyed the trees seem not to care that some are as old as history,” he said. In total, Abdullah said that his family should receive 24,000 Egyptian pounds ($US3,287), which he said is not at all enough to start a new life.

He said he is stuck: he is unable to resist the will of the military yet he, as a farmer, has trouble imagining uprooting his family from the rural outskirts of western Rafah to the town of El-Arish, about an hour’s drive away and one of their only options. His children, he said, are used to open space and farming life.

“After all, I love living on, and working, the land, and being close to my loved ones,” he said.

In Rafah, a town made up of Bedouin and Palestinian refugees - both of which are often derogatorily referred to by Egyptians as “Yahoudie Sinai”, implying that they are Israeli collaborators - Palestinians like Abdullah live a strange double life. He can speak Arabic with a Palestinian accent and then easily switch into Egyptian colloquial. Yet while he breathes nearly the same air as his relatives in Gaza, he carries an Egyptian ID card, practically the only thing that makes him feel Egyptian.

To keep a sense of family, the Barhoums - and other split Palestinian families like them - have relied for years on marriages between members of the extended family, with brides and grooms sometimes meeting at the 1967 fence. These marriages will prove more difficult with the extended buffer zone.

Abdullah told MEE that the further he is pushed into Egypt, the more isolated he will feel. He has only one wish: to climb the walls and live with his relatives on the Gaza side, but this is impractical given the amount of paperwork needed.

“They live under blockade, and we should be next to them,” he said, referring to his cousins and other extended family members, whom he last saw in person in 2009 during the Eid al-Adha holiday.

In July 2013, after then-President Mohamed Morsi was ousted, the Egyptian military restricted Egyptian cellphone network coverage on both the Egyptian and Gazan sides of the border.

So for now, as they wave goodbye, Abdullah calls Etaf with a Palestinian cellphone using signals that can just reach the next neighbourhood - and will be useless when he is forced to move.

“These home demolitions are meant to break and destroy us, the people of Rafah,” he said. “We were separated. No brother is with his brother and no cousin will remain with her cousins.” 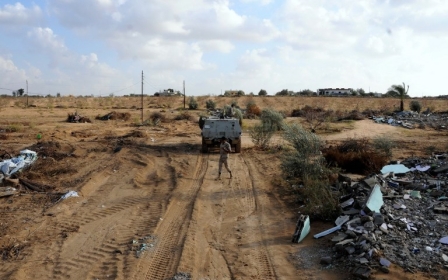 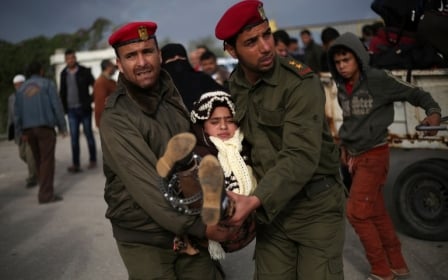