Mesut Torun rejects allegations of links between IS and Baath Party and says battle of Mosul is 'war of liberation' against Iran, US 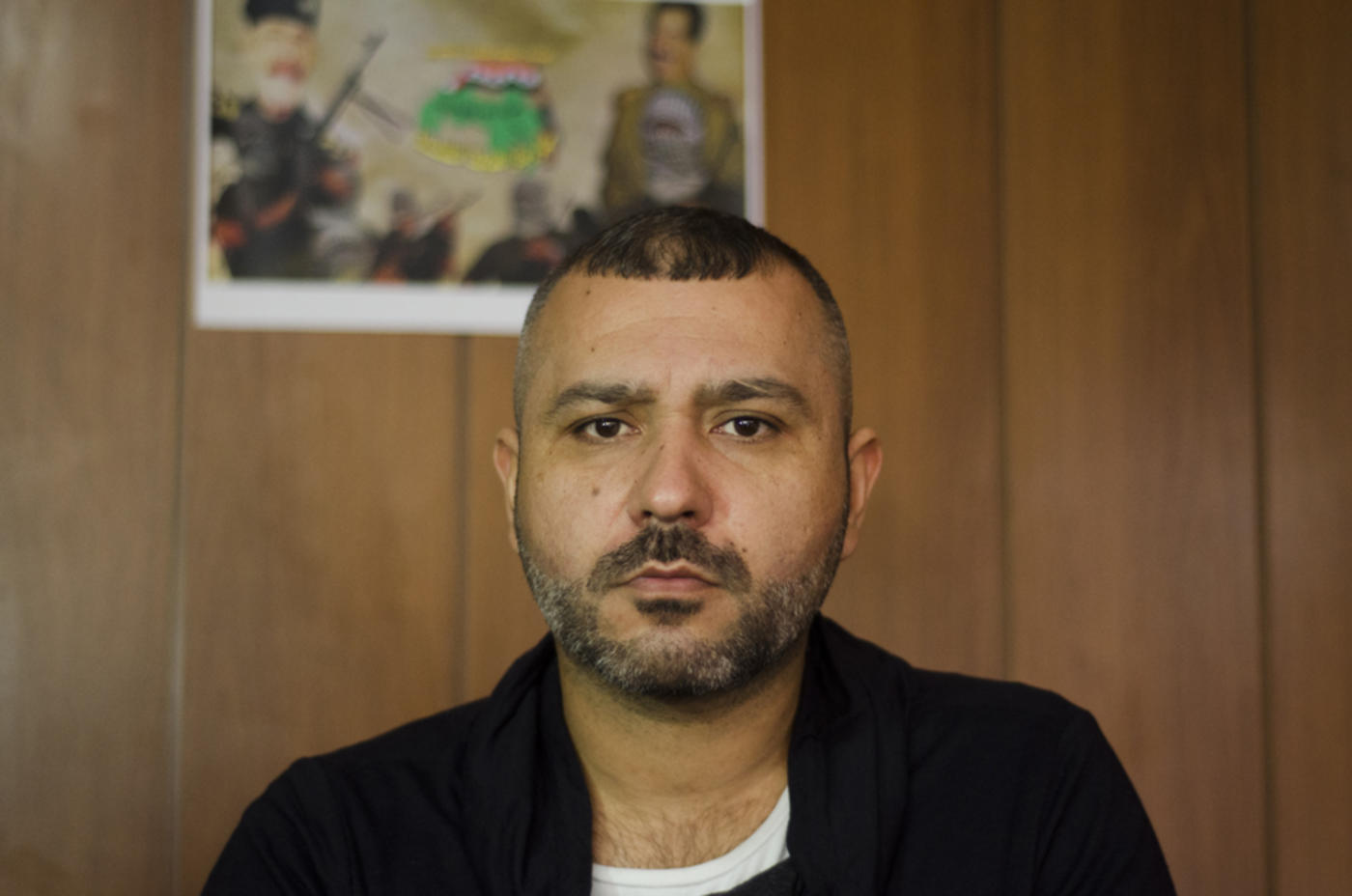 Mesut Torun says of the Mosul battle against the Iraqi government: 'This is a war of liberation, a struggle for independence. We are fighting against Iran, the United States and more than 60 countries' (MEE)
By
Musab Donertas

ISTANBUL, Turkey - Mesut Torun claims to be the grandson of the former Iraqi ruler Saddam Hussein. Born and raised in Turkey, the 33-year-old still flies the flag for the now-banned Baath Party and its struggle for what he calls the "liberation" of Iraq from Iran and the US.

Iraqi government forces fighting to capture Mosul from Islamic State militants are committing "genocide" against the population, and are facing resistance from Baathists and other Sunni forces in the city, according to Torun.

He also claimed that Baath militants were fighting the Islamic State (IS) group, as well as Iran, the US and Shia militias operating in Iraq, and that only Turkey should enter the city to protect its Sunni population.

'This is a war of liberation, a struggle for independence. We are fighting against Iran, the United States and more than 60 countries'

"This is a war of liberation, a struggle for independence. We are fighting against Iran, the United States and more than 60 countries. If only the Iranian militia would withdraw from our territory, we will be able to regain Baghdad within 48 hours," Torun told Middle East Eye.

Torun's claims cannot be verified from inside Mosul and many in Turkey have cast doubt on his late mother's account of her claimed marriage to Uday Hussein, Saddam Hussein's eldest son.

Sevim Torun claimed that she had visited Iraq during the Saddam era and married his eldest son Uday, who met her after she entered a Baghdad beauty contest in 1982. However, she said the relationship with the Iraqi ruler's notoriously violent son quickly deteriorated and Sevim, discovering she was pregnant, moved back to Turkey without the knowledge of Uday. Torun was then born.

Although Sevin Torun, who died in 2010, wrote a book about her marriage to Uaf Hussein, journalists pointed out inconsistencies and contradictions in her account, and she was also unable to produce wedding photos of the lavish ceremony she had described to support her account.

But Torun, who is also known as Mesut Uday Saddam Hussein, has maintained that Uday Hussein is his father and claims to speak for the Baath Party that ruled Iraq until the US-led invasion of 2003. Uday Hussein was killed during the war while his father was caught and hanged in 2006.

He told MEE he was in contact with the Baath, which is still known to be active in Iraq, and shares its view of the situation in the country.

He said Baath leader Izzet Ibrahim al-Duri had expressed support for the Turkish government and his own relatives came out on the streets in Istanbul during the 15 July coup attempt against President Recep Tayyip Erdogan.

Torun denied that the Baath had cooperated with IS, which is reported to have recruited many former Baath party supporters. Senior Baath intelligence and military officers became instrumental in the militant group's seizure of swathes of Iraqi territory in 2014, according to several reports.

Torun claimed that the US and Iran control IS, and that the power of the group has been greatly exaggerated by international forces. Stating that there were more than 70 groups in Iraq fighting against government forces, Torun said that the main strength is not IS, but Baath militants.

"Kerame Units, Liberation and Peace Brigade and Naqshbandi Army are fighting in Mosul with the Jihad and the High Command of Salvation. All of these groups answer to our leader Izzet Ibrahim al-Duri. Sunni tribes were also involved in this war in 2012. These tribes also belong to our leader," he said.

"Of course, there are also small Sunni groups not affiliated to the Baath. The Baath Party and Sunni tribes in Mosul are fighting [the government and foreign forces] not ISIS. This is a struggle for independence against more than 60 countries."

Torun claimed IS were in a "state of panic" in Mosul and that the Baath, under the banner of the Naqshbandi Army, had launched attacks against the group in recent days inside Mosul. The Baath Party is part of a coalition of Sunni resistance forces seeking to remove IS and end the Iranian "occupation" of Iraq, he said.

"Since the 2003 invasion, we have given 160,000 martyrs. Most of them are senior officers, teachers, engineers. Baath is not just a structure that fights for power in Iraq. Our leader al-Duri does not have a goal to be the prime minister. This is a war of liberation, a struggle for independence."

Torun sums up the demands of the Baath Party for the solution to the crisis in Iraq: "Initially, the end of the Iranian occupation in the country, a new transition government, the beginning of constitutional work and stopping the exclusion of the Sunnis."

According to Torun, who argues that IS is a common project of the US and Iran, the power of the organisation is deliberately exaggerated as part of a strategy to destroy the legitimacy of the "Iraqi resistance".

"IS is a terrorist organisation, there is no dependence on them. In the past days, the Naqshbandi Army organised major operations against IS in Mosul. As a result, we know that there is great panic in the organisation. So we are fighting inside Mosul against IS, and outside we are fighting against Iran, the US and Shia militias. I know it’s hard to believe but Baath does not want to put itself in the foreground. It is a part of our strategy. We [the Baath Party] do not ignore IS’ existence in the country, but they [IS] are not the main strength in the conflict. ”

Torun, who believes that it is not possible for IS to maintain its existence in Iraq, said: "The people of the region, the local forces and the tribes, are permanent here. They are the true owners of the country" and not IS.

Describing the conditions endured by population and the US-backed offensive to capture Mosul as "genocide", Torun criticises the international community for being silent on the situation.

"Civilians are being targeted by a very heavy bombardment. It is very sad that the international community has not reacted to this situation. This is genocide. People are surrounded and struggling in hunger and without medical support. Despite all this, our troops are exhibiting extraordinary resistance."

Torun argued that Mosul was the fortress of the Sunni insurgency. "If Mosul is overtaken by government forces, the security of Turkey will be in danger. We know that Iranian Shia militias have threatened Turkey before. However, we know that the same militias also want to go to Syria to support the Assad regime. If Mosul is lost, all the Sunnis will lose," he said.

'Only Turkey can enter Mosul'

He also predicted that Turkey would be forced from its Bashiqa base in northern Iraq by pressure from Iran, which wants Turkey pushed out of Iraq.

However the "resistance" forces in Mosul wanted Turkey alone to send its forces to take the city, said Torun.

"Iran wants Turkey to be pushed out of the game in Iraq. As the Iraqi resistance, we say that only Turkey can enter Mosul. No other force can enter Mosul. We have also called on Turkey before to solve the problems in the region. Our leader, al-Duri, had previously congratulated the Turkish government after the [2015] election. He ended the statement by saying "your brother Ibrahim" to President Erdogan. We are with the present government for the interests of the region and Turkey."

Torun also said: "Only the Turkish flag is the unbeaten flag of Islam. It is the flag of the Ottoman Empire, so it is the flag of all of us. That's what the Baath Party thinks."

Torun denied any aspiration to take over the leadership of the Baath party as the claimed heir of Saddam Hussein in Iraq. He said those in the party who believed this "should not talk dreamy. I have no personal passions. I depend on our leader al-Duri.

"I do not want to put myself in the foreground. We have a party and an army. Our party has directors. There are people who are martyred in this struggle and who pay a big price. My job as the grandson of Saddam Hussein is to support our party. My only goal is to be a servant and a soldier of Sheikh Izzet Ibrahim al-Duri, our leader. The claims I deserve from my grandfather’s heritage are not true. If I have a right, be merciful to the people of Iraq."

He defended Saddam Hussein’s record, saying that he was a bulwark against the expansion of Iran in the region for many years. "We believe that the US wants to link Iraq to Iran and open up the Shia expansion in the Middle East. My grandfather Saddam Hussein was the safety valve of the Gulf states and Arab society, which prevented the formation of the present Shia sickle. After this safety valve was removed, everyone found himself neighbouring Iranian and sectarian militias."

Despite keeping a low profile, Torun has been working with radical Islamist associations known in Turkey for their closeness to the Iraqi Baath Party and has made several press statements in front of the Iranian and US consulates. He said that he occasionally received death threats from Kurdish nationalists and Shia militias.

In March 2015, a bomb attack targeted the Istanbul office of Adimlar magazine, where Torun has a senior editorial role. The magazine is known for its ties to the Great Eastern Islamic Raiders' Front or İBDA-C, a militant Salafist group that opposes secular rule in Turkey and has claimed responsibility for small-scale attacks in the country in the past.

The magazine has expressed support for IS, the Iraqi Baath Party and the Sunni population in Iraq. The suspects in the attack that killed one person and injured three others have not been found.