In search of the Saudi artist putting women centre stage 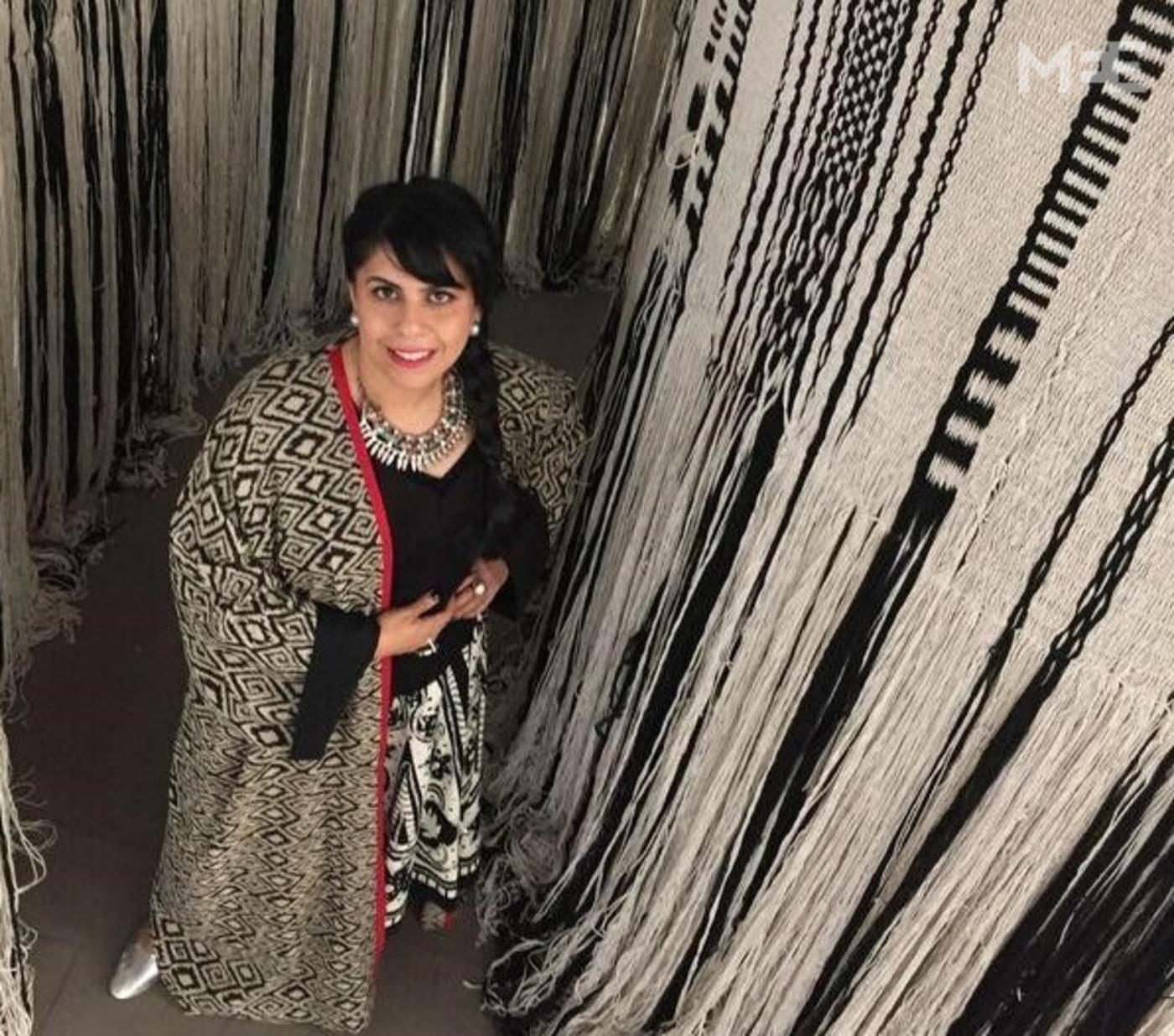 Saudi artist Manal Al-Dowayan uses her art to empower women in the kingdom (MEE/Sarah Aziza)
By
Sarah Aziza
JEDDAH, Saudi Arabia - It was a balmy February night in Jeddah, and I had managed to coax my work-weary father back into the manic evening traffic. As he muscled our Ford Explorer through swarming, honking lanes, I squinted at my phone to re-read the cryptic tweet that had prompted our quest. According to “@SaudiArtCouncil,” a new art show had just opened somewhere in North Jeddah, at a venue neither my father nor I had heard of - Gold Moor.
I braced myself for a dead end; in my experience the most common outcome of such endeavours in the kingdom. Still, I hoped we would succeed. The exhibit, if we could find it, would give us access to an installation by Manal al-Dowayan, a prominent Saudi artist I had come to admire for her work addressing gender and class issues.
GoogleMaps glitched, as it often does in Saudi, but by 9pm we had managed to locate a large building bearing a dimly lit sign reading “Gold Moor.” The parking lot was nearly empty, and an eerie glow rimmed the curtained doors. Inside, we found a gleaming atrium encircled by shuttered, silent storefronts. Behind us, a figure in an embroidered black cloak slipped in through the front entrance and disappeared into what looked like a custodial closet on the far wall. I followed her, catching the cool metal handle as it swung shut behind her.
On the other side, we found ourselves in a cavernous cement hangar lit with candles and soft white bulbs. From the ceiling, oversized replicas of cumulus clouds dangled in a wispy canopy. Beneath, a young woman spoke in soft tones to two young men in tight-fitting polo shirts. To our right, glass doors swung wide, and beyond, walls of artwork.
Al-Dowayan’s piece was centre-stage in the first room, a long, thick strip of woven canvas hung in a spiral from the ceiling, brushing the bright hardwood floor. The tapestry was tight and precise at the top, loosening further down before becoming completely unravelled at the bottom.
“Sidelines, 2015. Handmade Sedu made of wool and cotton thread” read the caption. My father stood back, a little puzzled, while I moved inside the tunnel of woven wool, following its curving path for several turns until I reached the end. Inside, the darkness was warm and close and smelled faintly of desert flocks. “Where’d you go?” joked my father. On my way out he snapped a picture of me on his cell phone.
The next day al-Dowayan walked me back into the coiled shadows of Sidelines and the poignant stories that inspired it. Her voice is rich and articulate, clipped with only the slightest notes of an accent.
She began by describing her team: a group of Bedouin women from eastern Saudi Arabia who utilised their skills in traditional weaving to create the panels for Sidelines. For most of these women, their first encounter with contemporary art brought excitement as well as perplexities. “They couldn’t believe it when I said we were going to undo the bottom of the weave,” al-Dowayan said, who used the process to speak with the women about their eroding agency in society.
It is not the subtlest of messages, but with Sidelines al-Dowayan addresses a glaring problem. “Women are always being pushed to the fringes,” she explains, “and the situation of these Bedouin women is an extreme example.” Craftswomen across the kingdom once earned a steady income from their work, but now, al-Dowayan says they’re mostly destitute. “Their place in society is unravelling, and, like women all over the country, they’re made dependent on men.”
The combination of disempowerment and isolation traps these women in a destructive cycle and this phenomenon inspired Sideline’s spiral shape. “When you enter, you find yourself in a douama - a vortex,” she told me. “You get to the centre, and, well, it’s a dead end. There’s nothing to do but go back.” I asked her if, by “go back,” she was referring to a retrieval of the past, or a regression. “A regression,” she responds quickly. “It’s all about loss, deterioration.” She laughs. “Yeah, dark stuff.”
This is not the first time al-Dowayan has used her art to train an incisive gaze on social issues. With her photo series entitled “The Choice” and “I Am,” al-Dowayan’s message is clear: she wants women to be both seen and heard. In “I Am,” al-Dowayan depicts portraits of Saudi women, but notes that in each she uses “a piece of traditional jewellery placed in an obstructive and unnatural way” to question the “cultural traditions that prevent Saudi women from expanding their roles in society”.
Critical as she is of contemporary social norms, al-Dowayan insists she is calling not for a break from tradition, but a revival. “In Bedouin culture, women were wage-earners through their weaving and other crafts,” said al-Dowayan. Oil money and urbanisation has dramatically reduced women’s independence, argued al-Dowayan, and social progress must revive and expand the inclusion and education of women.
Al-Dowayan’s collaborative projects and workshops have engaged hundreds of women to defy what she calls the “intentional erasing” of the female presence. With her 2012 exhibit Esmi  (My Name), al-Dowayan and her partners addressed the cultural practice that forbids speaking a woman’s name in public.
“This social taboo has no basis in religion or tradition,” she insisted, but argued that this practice has dangerous implications. “By removing a woman’s name, obscuring her face, lowering her voice... it becomes easy to dehumanise her.” The women painted their names on oversized prayer beads that were hung in heavy loops from gallery ceilings.
Al-Dowayan says the process of creating art transforms women from timid to impassioned. “There’s always this incredible energy - no one wants to leave after the workshops finish,” she laughs. I imagine rooms full of buzzing women clamouring around tables spread with craft tools.

When it comes to the Saudi government’s response to her work, it is generally positive. “I’ve never been censored in this country,” she told me, and chuckled, “that’s disappointing for some Westerners.”
Still, al-Dowayan is outspoken about social obstacles still facing women, resisting conservative claims that women’s empowerment threatens Saudi identity. Al-Dowayan earned her Masters degree in the UK and worked in the oil industry for 10 years, but she is a rarity in a country where only about 16 percent of women are employed.
Saudi conceptions of propriety also complicate her work on a practical level, making it difficult for her to enter factories where some of her installation pieces are produced.
Predictably, the Saudi prohibition of female drivers is another inconvenience for al-Dowayan, whose work with Bedouin communities requires travel to remote towns. Eventually, al-Dowayan moved her studio to Dubai and now splits her time between Saudi Arabia and the UAE. “It was a practical decision,” she explained, her voice a little weary.
Despite her critiques of Saudi society, al-Dowayan is no apologist for the West. While European and American fans have tried at times to cast her as a crusader of democratic ideals in a backwards land, she insists that her work is about empowering her own society to determine its path forward.
Al-Dowayan also resists being characterised as a “feminist artist”. “That word comes to us with so much baggage from the West.” While she confided in me that she does consider herself a feminist, she would rather not dwell on it. “We’re in the very, very early stages of our own feminist movement - I want it to happen naturally."
On the other hand, she faces some pressure from contemporaries to join them in producing art that is “more abstracted”. Some peers encourage her to “distance herself from regional subjects,” but al-Dowayan is unconvinced. “People always react to honest art,” she told me, her voice ringing with conviction. “If I started to cater to other people, my art would be lying and the work would be weak.”

Al-Dowayan says that increased patronage by wealthy collectors in the region is boosting artistic output, while the growing numbers of galleries, shows, and art fairs gives creatives an outlet for their work. “It’s becoming a viable career,” says the artist, who began her own pursuits as a photographer by co-opting an abandoned darkroom in Dhahran.
Al-Dowayan has opened three shows in the past two weeks and she is brimming with ideas for the future. A coordinator of the Saudi Arts Council, Hani Makki, told me he sees a hunger for art in his society. “It connects us to our common experience as humans and it makes us think about our responsibility to one another,” he told me as we discussed a piece by exiled Syrian artist Boutros al-Maari.
Back in the gallery, across from Sidelines, I watched small clusters of Saudis - men and women - mill quietly between installations, oil-drenched canvases and sculptures. The room had a quality of contemplation and openness that is rare to find in a country where public spaces are usually restricted to gaudy malls and sex-segregated franchise restaurants. I spotted a few young couples who were obviously on dates and several women paraded the hardwood floors with their long hair uncovered.
While some seemed more interested in snapping selfies, a number of loners paused for long moments in front of displays. Near the door, three older men in white thobes and checkered ghutras discussed a painting with a slender woman cloaked in black. I admired the woman’s erect posture as she stood, shoulders squared, in their circle.
Al-Dowayan suggested that she doesn't need to pander to foreign audiences - the art scene in the Middle East is gaining a vigour of its own. I recall my father’s surprised pleasure from the night before - after decades living in Saudi Arabia, he’d “never seen anything like that before”.

Contemporary art, says Al-Dowayan, is a recent phenomenon in the kingdom. “In just the last four or five years, things have really started to pick up speed,” she told me. “The scene is very raw and very real.”