In his latest exhibition, Houmam al-Sayed displays the devastating impact of long-standing oppression in the Middle East 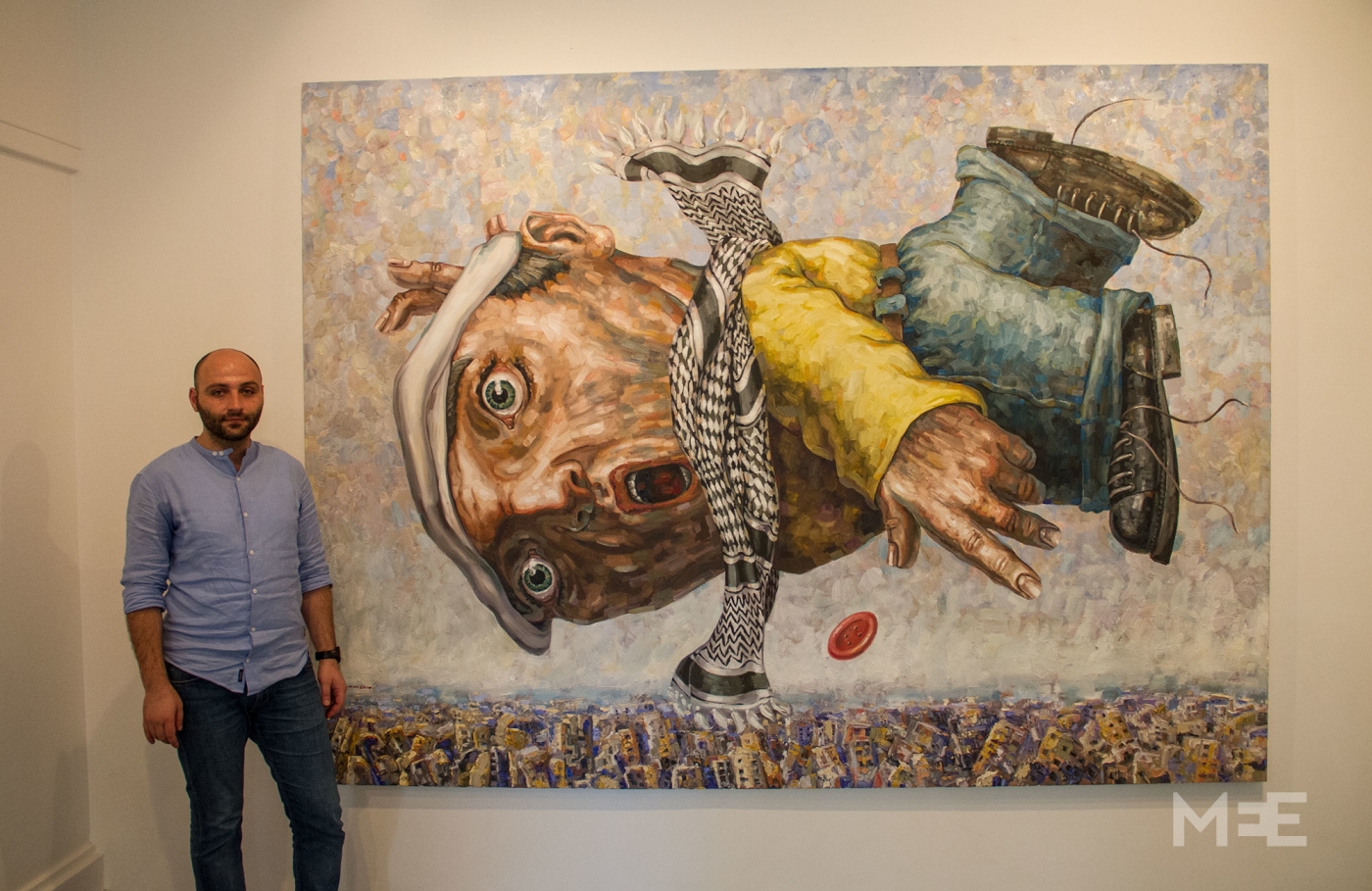 A painting by Syrian artist Houmam al-Sayed in his latest exhibition in Beirut, drawing on the ancient and modern history of the Middle East (MEE/Changiz M Varsi)
By
Changiz M. Varzi

BEIRUT - According to legend, St George, the saviour of Lydda in Syria, fought the dragon that nested atop the city’s main water source. In religious paintings, he is usually depicted as a hero fighting and killing the dragon with a long spear. By contrast, Syrian artist Houmam al-Sayed’s St George is a grotesque figure petting a cat. Al-Sayed painted him as an ordinary man in jeans and shirt, with a distorted face and crossed eyes.

The figures in al-Sayed’s paintings, drawings and sculptures are swollen and misshapen. Nonetheless, for the most part, they seem to be totally at ease in their absurd situations. They look puzzled, but not because of what has happened to them. It is as if they are confused by our wide-eyed stares, gazing at them, and not by their own misery.

The latest exhibition by al-Sayed, who lives and works in Lebanon, depicts characters with deformed faces and with short arms and legs. In June, he held a solo exhibition, Futile, in Beirut’s Agial gallery, showing alienated human figures on large canvases.

This is not the first time the Syrian artist has depicted hopeless characters trapped in preposterous situations. In June 2014, he showed his works at another exhibition, entitled Pickle, in Beirut. The crumpled and crushed characters in that exhibition symbolised the widespread public oppression throughout the Middle East, from military rule in Egypt to war-torn Iraq and Syria.

“The characters that I illustrate are examples of the people who have been living in this region for centuries,” al-Sayed told Middle East Eye. “What I am trying to show through my work is not confined to our current situation. This is about what has happened to us over many hundreds of years.”

The numbness of the oppressed

The 35-year-old painter was born in Masyaf, a small city in northwestern Syria which in the 12th century was one of the headquarters of the rebellious Hashashins. At the time, the Hashashins sought shelter in the mountaintop fortresses scattered across today’s Iran and Syria while fighting the Turk-Persian Seljuk Empire. For centuries afterwards, Masyaf became a battleground.

“Now, Masyaf is a small city with only one cultural centre, the historical Hashashin fortress, and nothing more,” al-Sayed said. The painter held his first exhibition at the age of 17 in the port city of Latakia, 90 kilometres from his hometown. Latakia is the capital of a Syrian governorate of the same name; it is a province that has seen the confrontation of warring factions since the beginning of the Syrian civil war.

“The people of the Middle East are the victims of excessive violence,” al-Sayed explained. “Every ruler who came into power in this region exerted pressure on the people and violently suppressed them.

“During the Ottoman Empire, the French mandate, British colonisation, Arab nationalism, and today’s religious extremism, the common people have always been the greatest losers. I tell the story of these people; the ordinary people like myself.”

The characters in his paintings appear helpless. They are unwilling to make a move, even though they are standing on their feet. They do not even look interested in taking action to effect a change in their conditions.

Al-Sayed’s Noah is grounded on the rocky seabed of a dry sea. His Flying Dutchman has a ship’s wheel nailed to his body, and the painter’s Moses is rolling a hoop instead of parting the Red Sea. These figures look at us with an air of acquiescence to their inescapable fate.

From the Middle East to the world

“Al-Sayed’s characters portray cynicism and hopelessness, but in an unusual way,” Lebanese art collector and manager of Agial art gallery, Saleh Barakat, told Middle East Eye. “He paints the figures in tragic situations, but you don’t know whether to laugh or to cry when you view the works. Above all, he presents tragedy without a drop of blood or any violent images.”

Since the beginning of the Syrian war, Barakat has organised exhibitions as an artistic way of communicating the destructive effects of war. “I am not interested in art as propaganda that follows a political agenda,” Barakat said. “I promote pieces of art that shed light on the humanitarian situation in Syria, and al-Sayed is providing a clear image of what is happening to people in this region.

“He expresses the desperation of these people and their melancholic situation with a very humane perspective. Regardless of your nationality and place of living, you can see yourself in the characters of al-Sayed’s paintings.”

Al-Sayed’s recent exhibition has received wide acclaim in Lebanon. However, within the art circle in Beirut, some artists have criticised the lack of variety in his recent collection. “I like his paintings, but I feel they are becoming repetitive,” said Naim al-Hajj, 27, a Lebanese painter and a member of Space 27 art initiative. “We see the identical character in different situations, and he has been working on the same theme for quite some time.”

Al-Sayed’s reply was simple: “I am not yet done with this theme. In each painting and sculpture I am exploring possibilities, adding new dimensions to my character, and elaborating on my work.”

In his earlier works, al-Sayed conveyed the pain and agony of his people. Visual references such as Middle Eastern headdresses and traditional outfits were clear indications of the regional culture in those pieces. In his most recent works, he has crossed that boundary by placing his figures in everyday settings. He is now revealing humanity’s failures and his characters are no longer only Middle Eastern people.

Art critic Marie Tomb, in al-Sayed’s exhibition catalogue, wrote: “In Houmam al-Sayed’s paintings, it is neither a man, nor an ideology, but a nameless and faceless structure whose countless metamorphoses reemerge anywhere they find detractors to silence and abuse citizens.” She continues: “His characters propose a version of what one might be reduced to when the pressure of religion, the state, and ideology is too much to bear.”

Al-Sayed’s painting of marionettes entangled in their own strings is not only related to the on-going social and political limbo in the Middle East. This piece also symbolises the fate of everyone who is governed by unscrupulous rulers. This could be the case in a Middle Eastern dictatorship or in a Western democracy.

“What I see in our era, is the failure of all political, social and religious legends,” al-Sayed said. “You can find symbols referring to these legendary figures in my work. These figures are not only nostalgic about the past but also fearful about the future.” 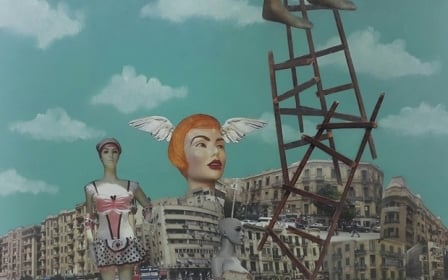 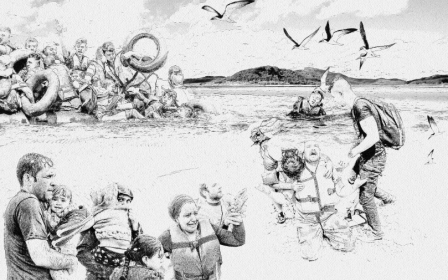 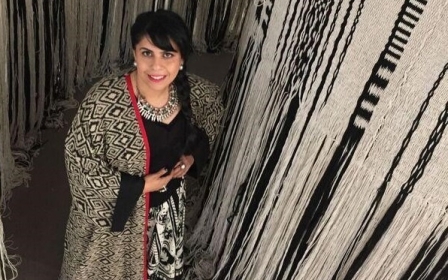