Tensions simmer between locals and refugees in Turkey's border province

'One day the problems will accumulate and we will have to take action,' warns one Turkish shopkeeper in Narlica, where resentment is growing 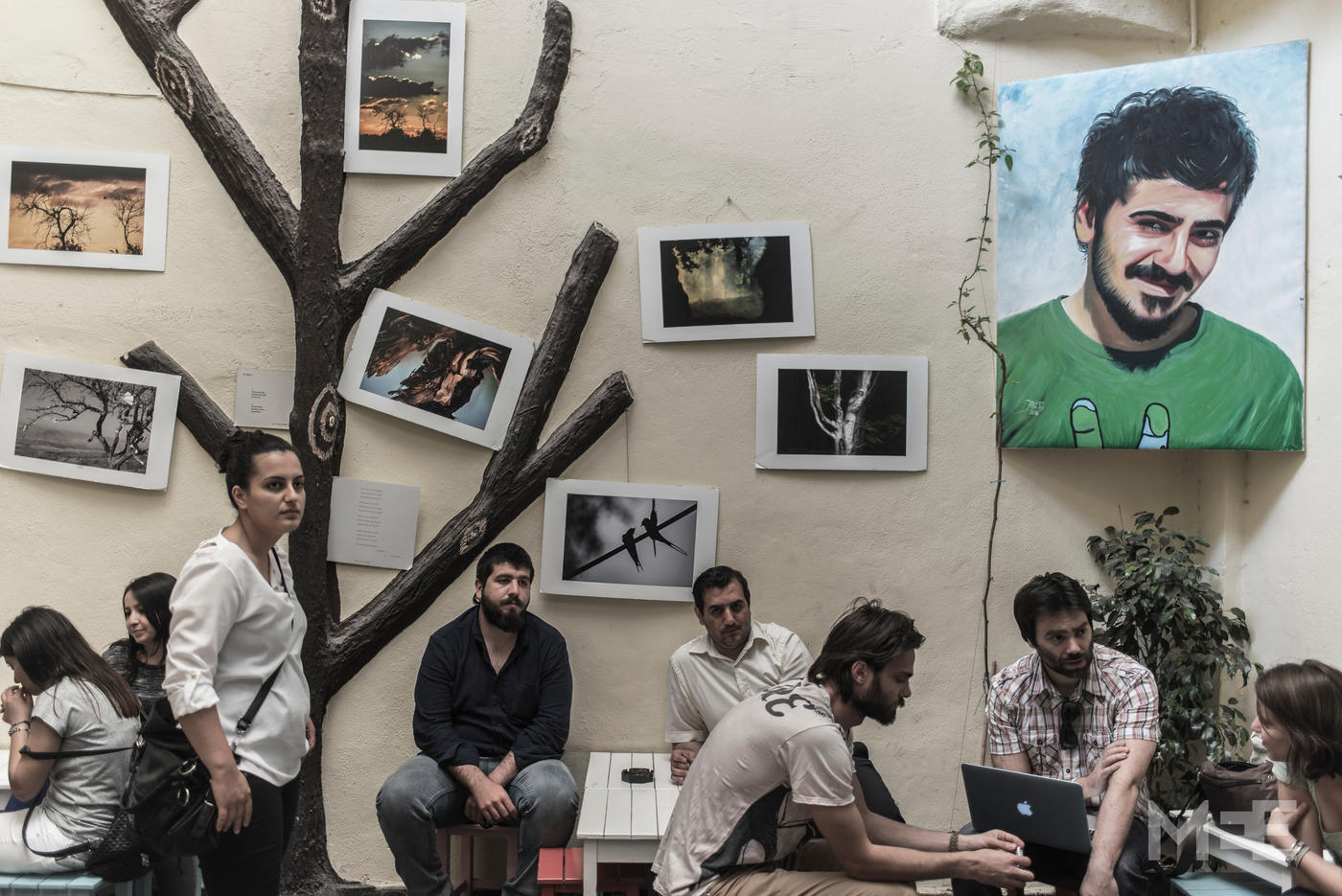 A youth centre dedicated to Ali Ismail Korkmaz, one of the protesters with an Alawi background who died during the Gezi demonstrations in 2013 (MEE/Joris van Gennip)
By
Kim Deen
, Zara Toksoz

ANTAKYA, Turkey  - At the beginning of the afternoon, the streets of Narlica are peaceful. The men of this residential area in the southern Turkish city of Antakya are working or looking for work. The women take laundry out to their concrete balconies.

Taghreed (who does not want to be identified by her surname) watches the family business, a small shop beneath the apartment in which she and her young family, mother and sisters live. Almost a year ago they moved from Syria to Narlica, and the family can barely survive on the shop’s revenues. “In Syria there is no money, no life anymore,” she says. In front of the shop, a couple of elementary-school-aged kids run after a ball. Taghreed animatedly talks of how she is treated as a Syrian refugee in the neighbourhood. She does not notice a Turkish neighbour emerge out of the chaos of the kids outside, seemingly having heard Taghreed speak. The woman places her heavy shopping bags on the ground. ‘’We have always treated you well. Haven’t we?’’ she asks. Taghreed takes her to a corner of the shop and hastily asks how she is doing while presenting the stall of shoes she sells.

After the woman leaves, Taghreed falls back into her chair. With a quick look at the door, she continues to share the stories of her experiences with her Turkish neighbours. ‘’On some days they get angry,” she says. “I think it's because they assume that we only want their money. For example, I have a refugee card with which I get 50 lira ($17) a month. So they say, Erdogan gives money to Syrians while we get nothing.’’

Teoman (not his real name) is one of Taghreed's Turkish neighbours and he is, indeed, angry. For over 20 years, he has had a shop in Narlica in which he does everything himself: he is a hairdresser, a florist, a photographer, and a well-known man in the neighbourhood.

In a navy-blue suit and shiny black shoes, he sits in front of his now quiet shop. ‘’I’m struggling nowadays,” he says. “Ever since Syrians started living here, everything has gotten more expensive. The rents are rising. I work all day, but I make little money. My store is suffering because of it."

The tensions are rising so much that refugees and the old residents of Narlica have recently been getting into fights on a daily basis. Residents tell stories where knives and weapons are involved. On 1 May, parents were at each other’s throats after some Syrian and Turkish children got into a fight. A hunting rifle was brought out by one of the parents and three Syrians were injured.

Since the recent EU-Turkey deal made it impossible to travel via Greece to Europe, more and more Syrians have had to permanently stay in Turkey. In the southern province Hatay almost half a million Syrians are registered.

Some neighbourhoods have completely changed due to the large number of new residents. One such neighbourhood is Narlica. While the area had 17,000 Turkish and Alawi citizens before the Syrian war, now it hosts an extra 38,000 Syrians who have taken refuge in the area.

Hatay is considered a culturally diverse province in Turkey. Aside from Sunni Turks, Christians, Armenians and Kurds, a large number of Arab Alawis live in the province.

This group has been on bad terms with the current government for the past few years. The prominent role that president Erdogan’s AK Party gives to the Sunni community worries the Alawi community. Many Alawites fear that this state of affairs will endanger their way of living as a religious minority in Turkey.

The large number of Sunni refugees with different cultural backgrounds that currently live in the area frightens the already-tense community. Yusuf Gülüm, a lawyer and member of the HDP party in Hatay, is concerned that the region is changing. ‘’It used to be quiet in Antakya, but now the population has increased and so has the unemployment and criminality,” he says. “Additionally, we have the feeling that the government wants to take Alawis out of the game and is intentionally placing Sunni Syrians in the region.’’

Gülüm stresses that the chaotic start of the refugee inflow has been traumatic for the region. ‘’There have been many attacks. I constantly check social media to see whether another bomb possibly might have detonated." He remembers how in the beginning mostly fighters crossed back and forth over the border. "They came here for medical care and to buy new weapons. Only later families came, people who actually fled the intensifying conflict."

In Narlica, Teoman is down to his fifth round of tea and his friends in the neighbourhood have joined him in front of his shop. The men have the feeling that refugees bring along chaos. They discuss the knife fights that have recently become a regular occurrence between the old and new residents of the neighbourhood. The owner of a doner joint just across from Teoman’s shop confesses that there is a mutual fear. "In our neighbourhoods,” he said, “the group that is the minority is afraid. Whether they are Turk, Alawi or Syrian. Here, the Syrians are the majority now and we stay behind."

According to Ali Demirgan, a Turkish research journalist in Hatay, refugees are not only on bad terms with Alawi residents, but also with Turks. "At the start of the war, many Turks here quickly found opportunities to rent houses to Syrians and took Syrian girls as second wives,” he said. “In those early days everything went perfectly fine and they thought: they are useful to us.’’ But over the past year, the relationships seem to have slowly deteriorated.

In Narlica, a petition had been initiated by angry residents for the purpose of demanding the eviction of Syrians from their houses. "This petition was cancelled under pressure of a couple of influential Turks in the region, who make a lot of money off of the refugees," Ali explains.

Still, solidarity is also expressed between the groups living in the area. Kiraz has a small clothes store just across from the immigration office in Narlica. "Many children have starved to death there. I have seen it in front of my doors. That’s why I try to help everyone, Turk or Syrian.’’ She drops by her neighbour to get an extra chair for her unexpected visitors. "My neighbour is a Syrian refugee and has started selling some local products, here next door. We watch each other’s store when one of us needs to leave for a couple of hours. He is a good man, like many of them are."

According to a UN-accredited organisation, the Association for Solidarity with Asylum Seekers and Migrants, ASAM, poverty is the biggest problem that refugees are currently facing in the south of Turkey. In order to reach Turkey, many families have sold all their possessions. Simultaneously, everything is more expensive for refugees in Hatay.

A spokesperson of the ASAM Hatay office said: "The rent for an apartment is usually three hundred liras a month, but for Syrians the rent of such an apartment will be around five hundred a month. Besides,” they add, “a Turk may work for 60 liras a day, whereas Syrians get paid half the amount doing the same job."

Evren is psychological counsellor at ASAM and notices that the deprived economic situation is putting local structures to the test. She is worried about the number of Syrian girls who are marrying at a young age. "This is normal in certain Syrian communities, but these weddings are currently happening more frequently simply because families desperately need money," she says.

Many Turkish women in Narlica are not happy about this. One Turkish woman furiously comments while her teenage daughters nod along. "That can’t possibly go well! If my husband would bring another Syrian girl into the family that would be a disgrace,” she says angrily.

Hatice Can is a local human rights lawyer and emphasises that the Turkish refugee policy is not created to actively provide help. "What does temporary protection actually mean? Recently the government finally started to give out working permits, but the issue remains that refugees are not real citizens here and might never become so."

Mohammed (who did not want to give his surname), a Syrian refugee in the area, recognises this all too well. He has been here for the past three years now and says he can live within the Syrian community, but does not trust the Turkish authorities. "At government institutions, I’m badly treated so I prefer not to go there. Here in Antakya you are fine, as long as you are invisible and don’t create any trouble."

Many refugees therefore seem to stay within their own community and avoid contact with the Turkish population. Yusuf Hasan is a Syrian-Arabic Alawi and proclaims he is rather satisfied in Antakya. "I have a broad Arabic social circle here and teach religious classes. I have been here for five years and don’t speak a word of Turkish."

Due to the expanding Syrian community in Narlica, Turkish residents nowadays feel that they are slowly being ousted. Teoman complains to his friends, now at his seventh round of tea. "They have provoked the neighbourhood and taken over everything,” he says. “Maybe soon they will all be princes and we will become their servants.”

A neighbour lowers his voice and expresses that he thinks the problems are here to stay. "But one day the problems will accumulate and we will have to take action. What exactly? That is to be decided in the heat of the moment." 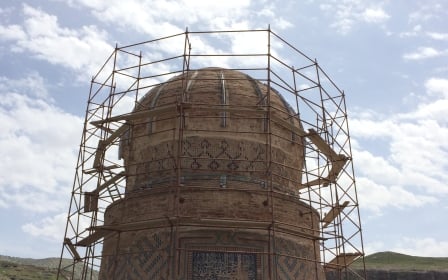