Fireworks, a darkly funny exploration of life under occupation, is a collaboration between new Palestinian writers and London's Royal Court 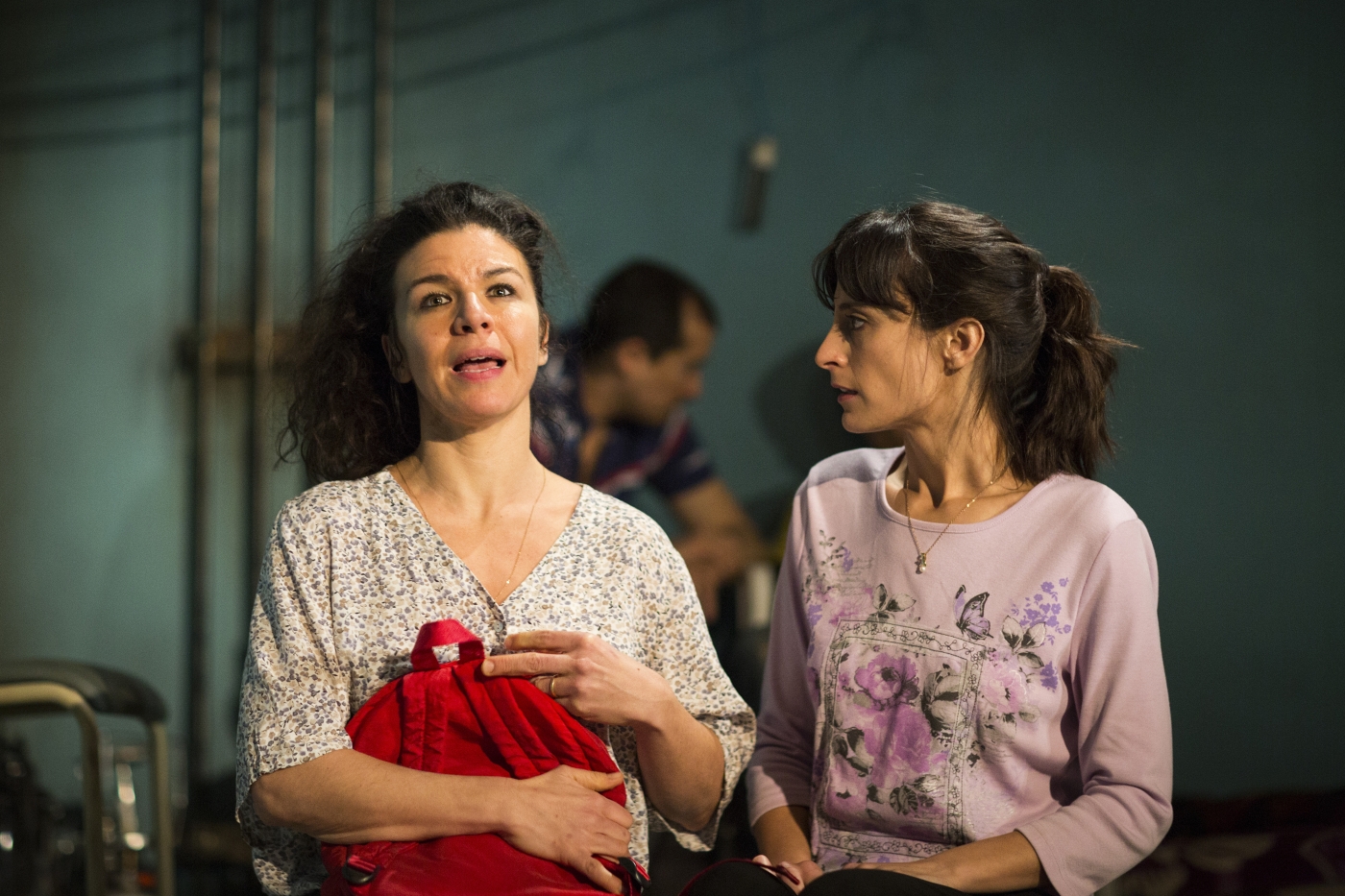 Sirine Saba (L) and Shereen Martin perform in Fireworks at the Jerwood Theatre Upstairs at the Royal Court, London
By
Tanushka Marah

“Haven’t you got your earplugs in?” asks 12-year-old Lubna’s father as he sees her sneak out of bed to watch the ‘fireworks’ that have woken her up. When occupation is normal and daily life continues the questions of parenthood, intimacy, work and marriage, are thrown into stark relief.

We see Lubna’s journey through her parents’ grief over their lost son, her puberty and her eventual understanding that the fire in the sky is in fact bombs, and people with bags under their eyes are people who sleep with their eyes open once they have seen someone they love dead on the street.

Fireworks, by 28-year-old writer and poet Dalia Taha, who grew up in Ramallah, marks the first full production by an emerging Palestinian playwright to be developed through the Royal Court’s international programme after a history of over 17 years working in Palestine.

The Royal Court has been working in the West Bank since 1995. Relationships have grown with Palestinian writers and theatre companies, in particular al-Kasaba in Ramallah and al-Harah Theatre - formerly Inad Theatre - in Beit Jala. In 1998, a permanent writers’ group was formed in Bethlehem.

Set in an unspecified Palestinian city at the beginning of the 21st century, we inhabit the cramped homes of two families living side by side, “waiting to be bombed” as they remain in doors whilst the bombing continues and family frustrations build.

The domestic details take us away from the media horror-fest of violence to the daily humdrum of a life that we can actually dare imagine. The cheap nylon clothes, plastic shoes, can of coke, ‘shitty cigarettes’ and the kitsch brightly coloured poster stuck to the wall, with Nahla’s cheeky martyred son looking at us from a cloud.

Nahla begins the play insanely grinning and making dark jokes about which window she would jump from to kill herself. “I’m not going to end up paralysed so you can rape me whenever you feel like it,” she jokes to her husband Khalid over her shoulder whilst cooking and in between teasing him that he is not an engineer just an electrician. The mother, confounded by her son’s death, has some of the funniest lines in the play.

Next door young Khalil argues with his mother Samar that he wants to be martyred. “Do you want me to pick you up and put you in a plastic bag?” replies his mother, which soon puts a stop to the argument.

All the characters are searching for intimacy with each other within marriage or within the new friendship between the two children. Deep down each character has their solo grief, questions or fears that both the script and the performances explore with subtle expertise.

The direction by Richard Twyman effectively brings out the claustrophobia of the situation. All actors remain on stage and we see them in the background low lit against the dirty blue walls, shaving, playing, stitching and passing time. There is the sense of company even in the most intimate scenes, such as Ahmad tenderly washing his wife Samar’s back with their limited, tepid water whilst discussing sending a bomb threat to a restaurant.

Saleh Bakri, a leading Palestinian actor, plays the bereaved father with alarming truth, depth and ferocity, culminating in him having to shout down all his wife’s illusions of martyrdom and bringing her round to the unbearable truth that their son is simply gone forever.

Nabil Elouahabi, a British-born Arab actor, is fast claiming the monopoly on the downbeat everyman of the war-torn Middle East. With true sincerity and utterly believability he beautifully portrays empathy in a deeply touching scene between the two men as Khalid weeps for his loss.

Palestinian/ Lebanese actress Sirine Saba’s passionate performance successfully conveys the daily confusion and non-acceptance of a mother who has lost her son without any sense to his death, simply because a soldier felt like it.

Shereen Martin, whose flawless accent and uncannily Palestinian features fooled us all, plays with sharp precision a doting mother who cannot allow her boy to grow up even when his frustrated violence turns on her.

Finally it is all about the children. Played with beautiful sincerity and fierce energy by Shakira Riddell-Morales and Yusuf Hofri, the children play, count and argue about whether it is Coke or Coca Cola and what amputation feels like. Through their joyful games -Khalid points a gun at Nubla and quickfires contradictory questions and instructions aimed to confuse and humiliate her - we truly get a sense of what occupation means.

Finally we are left with Lubna, standing in the auditorium with us, having crossed the line from innocence to revelation, from childhood to womanhood as she comes to terms with terror. Her playmate is dead. She has seen him on the pavement. Her innocence is lost forever.

- Tanushka Marah is a British-born Palestinian-Jordanian theatre director, actor and teacher. She was a winner of the Young Vic director awards in 2002. With her own theatre company she toured her production of Medea in the UK, and performed it twice at the London International Mime Festival. She has directed productions at international festivals in Cyprus and Albania and toured extensively in the Middle East. Inside Israel
Review: Beneath my shirt lies an Arab