Is Turkey on the verge of returning back to the murders of the 1990s? 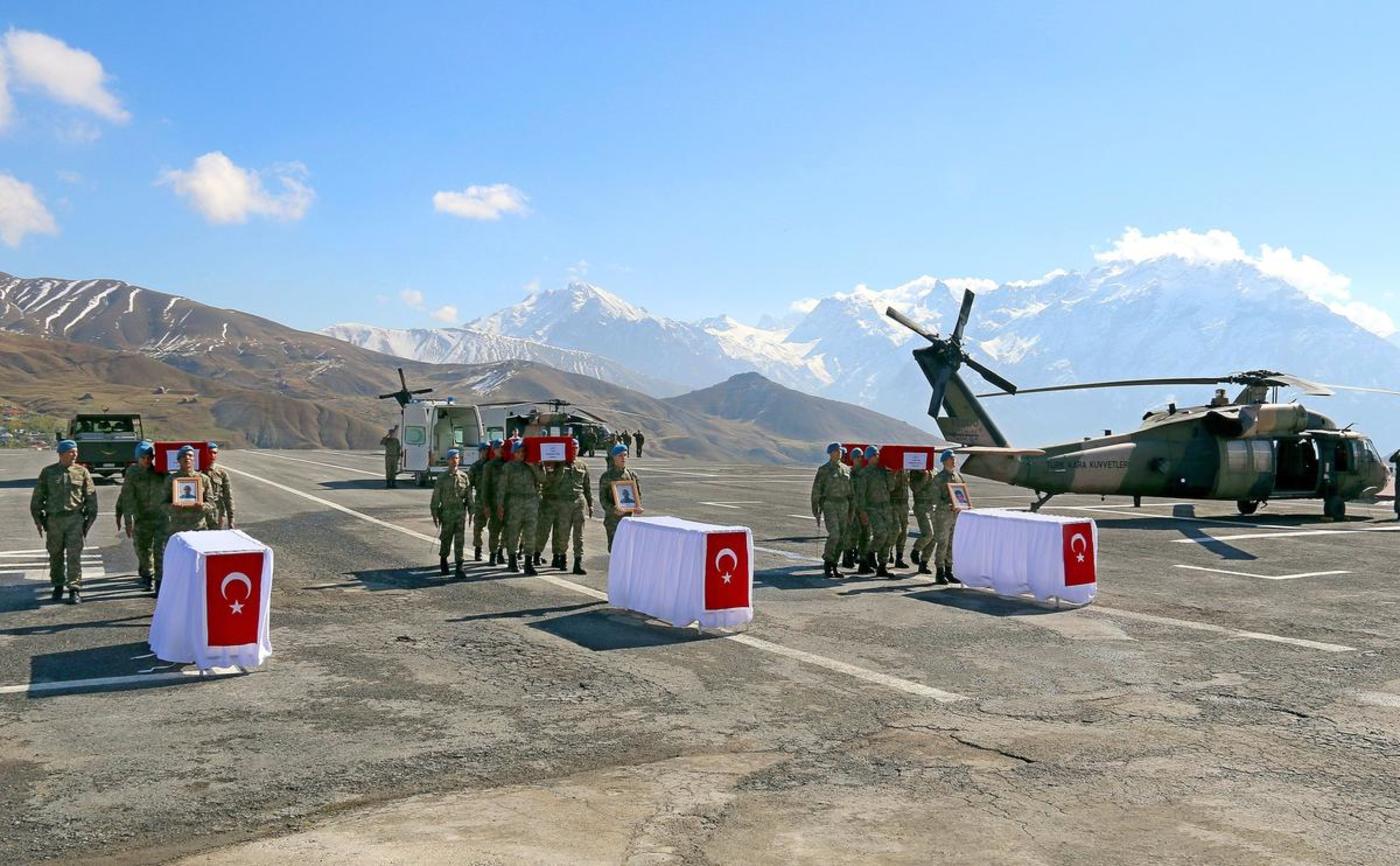 The killing of three unarmed Turkish soldiers in Yuksekova, Hakkari in southeast Turkey on Saturday and the murder of a village guard in Bitlis on Sunday inflicted yet another blow to the fragile Kurdish peace process in Turkey.

The soldiers, who were wearing civilian clothes, were shot on the head in broad daylight, and the village guard in Bitlis was found dead after having been missing for two months. He was found tied to a telephone pole and shot multiple times at close range.

Special security forces detained eight people on Monday afternoon, believing that the perpetrators might have links to the outlawed armed group, the Kurdistan Workers' Party (PKK).

The news broke following many weeks of rising tension in the wake of the Islamic State (IS) siege of Syria's Kurdish populated town of Kobane, Turkey's unwillingness to join the anti-IS coalition, and nationwide protests in Turkey calling the Turkish government to task over their inaction to save Kobane.

The method of the killings and the timing of the events as well as the PKK's silence over the matter hints at the lack of information and coordination in the PKK camp. Both sets of killings bear the marks of summary executions and serve as harrowing reminders of the dark days of the 1990s in Turkey.

Echoes of the past

In a similar, but rather more primitive peace attempt in the early 1990s, the president of the day, Turgut Ozal undertook the first concrete steps to end the bloody conflict between PKK fighters and Turkish armed forces. In return for implementing a partial removal on the ban on the Kurdish language, the PKK responded by declaring a ceasefire in 1993. The ban on the Kurdish language had been introduced in 1985 as a means of stemming the rising threat of PKK violence.

The death of Ozal on 17 April 1993, and the government's unwillingness to carry out Ozal's vision resulted in the resumption of the armed conflict. Unfortunately, what has been happening over the last few weeks in Turkey presents disturbing similarities to what happened in the aftermath of Ozal's death.

After several skirmishes between the Turkish military and PKK militants in southeast Turkey, Semdin Sakik, the second PKK commander after Abdullah Ocalan, ordered an attack on 24 May 1993, ambushing two buses with unarmed military personnel, and killing 33 soldiers.

In 2012, the Human Rights Commission of the Turkish parliament held a session to listen to two survivors of the attack. Privates Osman Partal and Erkan Omay testified in the commission that the ambush could have been avoided and that they were sent into a trap by "some [unnamed] forces."

It is still unknown how Semdin Sakik was informed about the route of two buses carrying unarmed military personnel, but his testimonies point to intentional negligence by the security forces. Years later during the Ergenekon trials, Sakik - who has been in prison since 1998 - claimed in court that "The government knew that we [PKK] were in the area and they let buses with unarmed soldiers drive right into us, knowing that we would attack them. They [the government] wanted to undermine the ceasefire."

According to former PKK field leader, Kucuk Zeki, this incident marked a turning-point in the conflict. "The state launched a very big operation against us. The war got much worse," he told Aliza Marcus; the author of “Blood and belief: The PKK and the Kurdish fight for independence.”

The similarity between the recent killings and the PKK ambush in 1993 also signify a worrying confusion regarding the current peace process. According to Ilhami Isik - one of the key figures who mediated talks between the Turkish state and the PKK in 1996 and onwards - the situation is clouded with many variables.

"On one hand, the killing of the village guard and the shooting of plain-clothes soldiers in the head reminds us of the 1990s," he told the Middle East Eye. "However, we are not in the 1990s anymore. If the peace process fails, it would give rise to a wave of violence that we have never seen before. No one can bear such a responsibility."

Though the killings and current frailty of the peace process in the wake of international developments, such as the besieging of Kobane by IS, and the deployment of the Kurdish Peshmerga to the battle ridden town, the situation does not indicate a sudden flashback to the 1990s.

Firstly, the dissemination of information is very different now to the conditions of two decades ago; reporting the truth is much easier. In other words, social media and the diversity of information channels help citizens avoid government or PKK propaganda. This forces both parties to act with a degree of restraint as any misunderstanding could toss the peace process into an irreversible course.

Moreover, the multiplicity of actors and increased public awareness, compared to the 1990s, help both sides to calculate changing dynamics and political conjuncture in a more precise way.

Perhaps the relative transparency of the situation and array of actors are the strongest aspect of the peace process. According to Cevat Ones, a retired undersecretary of Turkey's National Intelligence Organisation (MIT) who served for more than thirty years, the peace process is in fact a demand by different segments of Turkish society.

"It is certain that the latest developments - like what is happening in Syria and in Kobane - have a negative impact on the peace process. But as long as societal demand for a solution persists, politicians will carry the talks forward," Ones told MEE.

So far, no one has claimed responsibility for the attacks. The pro-Kurdish group, the People's Democracy Party (HDP) described the killings as a matter of "great sorrow and concern," in a written statement released on Saturday evening.

The absence of a claim of responsibility and the integrated structure of the Kurdish political movement raises questions regarding who was behind the attacks. For Mithat Isik - retired Turkish armed forces colonel and former commander of the Special Forces Command who ordered and executed the operation to capture Semdin Sakik in 1998 - the killing of three soldiers could not have been carried out without PKK's knowledge.

"The fact that no one has claimed responsibility for the attacks makes us think that forces beyond PKK and Abdullah Ocalan's control might be involved," he told MEE. "However, given the centralised organisation of the PKK, I do not think that the main headquarters was not informed prior to the attacks."

Mithat Isik believes that the PKK would eventually admit its role in the killings, but would probably put the blame on a local offshoot, saying that they acted on their own.

Yet, the recent killings are not the only incidents of similar type since the beginning of the peace process. In the last three years, other violent clashes have happened between the PKK and security forces.

For Ilhami Isik, the way that Yuksekova and Bitlis are portrayed in the media is important in assessing the fragility of the peace process. "We have witnessed similar murders over the last few years, but they were not presented in the same fashion before," he told MEE.

Isik further argued that the current hostilities are not related to democratisation or the sociological implications of the peace process, but it is rather a case of perception management in the wake of the increasing complexity of the situation.

Though the absence of official claim show similarities to the cold case murders of the 1990s, this incident is reminiscent of how easy Turkey could fall into the maelstrom of darker days.

Cevat Ones believes that this incident is also a reminder of the need for more democratisation and a transparent framework for the peace process. "The violent incidents of the past several weeks are an outcome of the lack of consensus regarding where the peace process is going," he said.

Nevertheless, there is another side of the coin: for some analysts, the peace process is not advancing on equal grounds. While the Turkish military ceased most of its operations, the PKK did not comply with its promise to halt its activities in Turkey.

Mithat Isik believes that PKK forces did not withdraw completely from the Turkish territory, and they continue to organise with their civilian elements.

"The absence of security operations gave the Group of Communities in Kurdistan (KCK) the ability to mobilise easily, allowing them to strengthen their armed presence," he argued. The KCK is the umbrella organisation of the PKK, consisting of civilian elements and provincial assemblies. The Turkish government considers KCK another terrorist organisation.

"As long as the security forces remain idle, we will witness similar murders," Isik suggests.

Indeed, in the aftermath of Kobane and nationwide protests, both Kurds and the government face a serious crisis of confidence. While the HDP links the Yuksekova killings to the murders of three Kurdish militants on 23 October, the government gave an angry reaction to this suggested connection.

On 27 October, Prime Minister Ahmet Davutoglu said, "You cannot carry out a peace process with soldier-guerrilla dichotomy. Why were the three terrorists killed? Because they attacked a dam. Seeing the peace process as a security vacuum is a logical flaw."

Ilhami Isik believes that the violent nationwide protests in Turkey that vented public anger over the situation in Kobane seem like a rehearsal for what may happen next. "Turkey could be dragged into total chaos, the likes of which it has never seen before," Isik contended.

For Mithat Isik however, the military should not sit idle. It should take active defence and intelligence measures to pre-empt possible PKK activities. "Pinpoint operations should continue, and at the same time, the peace process should carry on," he concluded.

On 27 October, Deputy Prime Minister, Yalcin Akdogan said, "What we have recently witnessed disrupts perceptions and poisons the peace process. The framework is clear and if you undermine the process, then we will do what is necessary."