Turkey's future: The only real choice we can make 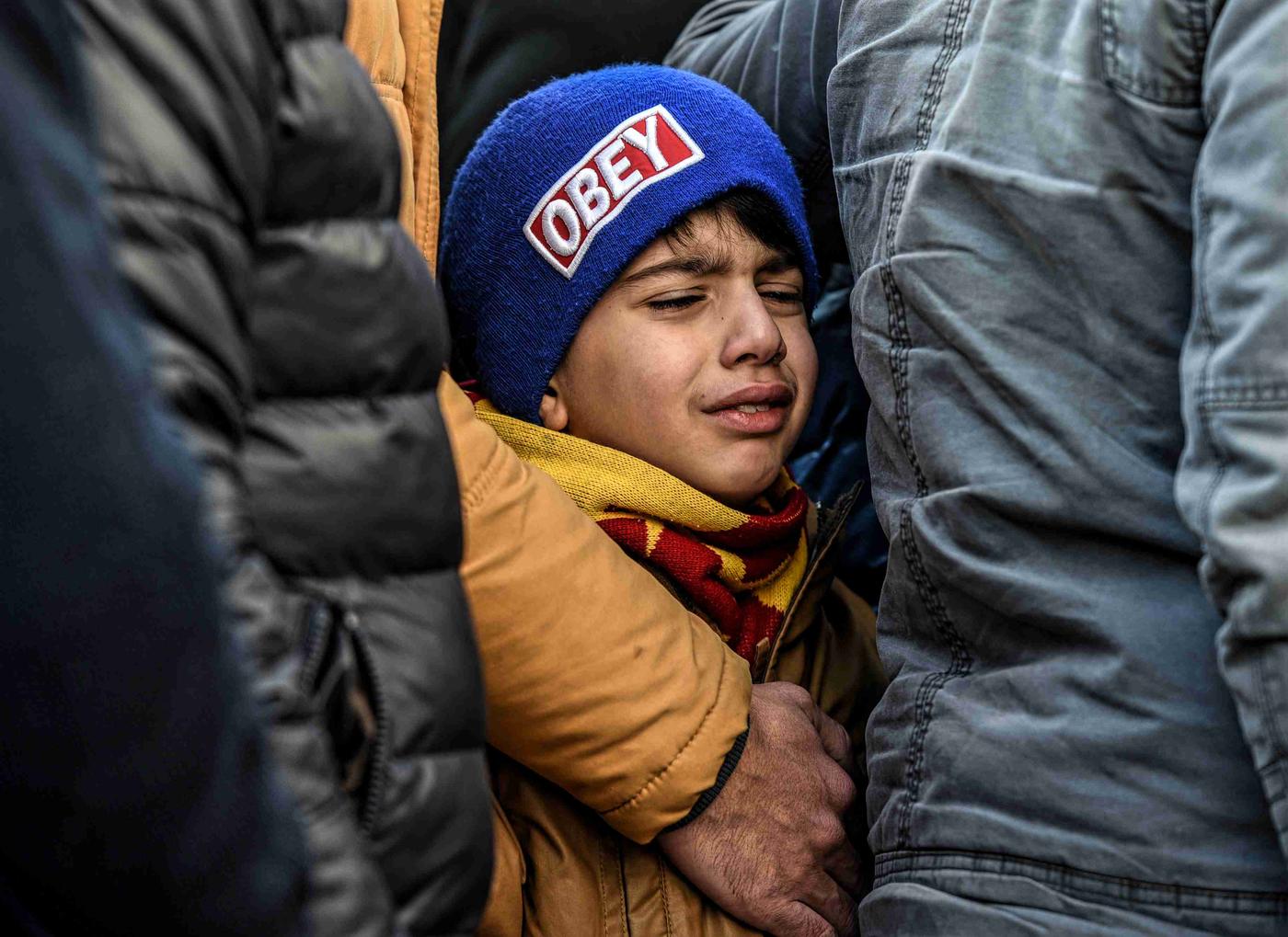 A nephew of Ayhan Arik, one of the victims of the night club attack, cries during his funeral on 1 January in Istanbul (AFP)
By
Suraj Sharma

ISTANBUL, Turkey – It started as the most traditional of Turkish New Year’s Eve evenings but ended with the shocking, if not entirely unexpected, news of another massacre.

In a few hours, many in Turkey and beyond would sit in absolute shock as news started to filter through of the Islamic State attack on Istanbul’s upscale Reina nightclub that left 39 revellers dead and many more injured.

Around five years into what is now my 15th year in Turkey, I had stopped grumbling about the odd (to me at least) way that Turks ring in the New Year.

There was a palpable sense that everyone just wanted 2016 to be done with and, despite all indications, hope for a brighter 2017

As with many things Turkish, it is a family affair. Friends and relatives gather for a very un-Turkish turkey dinner, play board or card games and sit glued to the TV, watching special programming until the clock strikes midnight.

This year we had popped over to Betul and Veysi, neighbours in the next building who have become friends, along with one other family and Betul’s parents. The mood was gloomier than usual. There was a palpable sense that everyone just wanted 2016 to be done with and, despite all indications, hope for a brighter 2017.

But where would we go?

Betul’s brother rang while we were sitting around the dinner table. Usually a regular at his sister’s New Year Eve dinners, he jokingly said via speaker-phone: “The last time I came around for dinner there was an attempted coup. I didn’t want to take any chances tonight.”

Although his remarks were in jest, the attempted putsch on 15 July and the massive purge that followed has had a major impact on the psyche of the Turkish people.

An initial fright that Turkey was making a return to the dark old days, when unelected military generals decided the fates of thousands based on their personal whims, evolved a few months later into dark mutterings of “would it have been that different if...”

There are very few people who believe that the US-based Turkish preacher Fethullah Gulen and his followers are innocent or good. The Turkish government had widespread popular support to crack down on that movement. But the administration also used its extended emergency powers to go after all its opponents, including the independent media. None of the families sat at the dinner table were directly impacted by these events but the general sense of despair appears to have seeped into peoples’ souls.

Most of the talk centred on emigrating somewhere else and the options available in a world that itself is growing more isolationist by the day.

I hung out in the kitchen while Veysi had a smoke, and listened to him speak about how concerned he is for the direction that Turkey is now headed. With two young daughters under five, he was worried about Turkish society’s increasing antagonism towards anything different, even if it is just thoughts.

Growing intolerance in all sections of society, from its rulers to its ordinary citizens, is causing concern. Arguments are not countered with arguments any more, but simply drowned out by shouting them down and in numbers.

And then there are the increasing number of terror attacks that have left everyone on edge. An initial sense of defiance is now giving way to fear, as atrocities randomly target civilians such as that in late June on the city’s main airport, which left 45 dead; or the December attack in front of Besiktas football club’s stadium in central Istanbul and a nearby park, which killed a similar number. 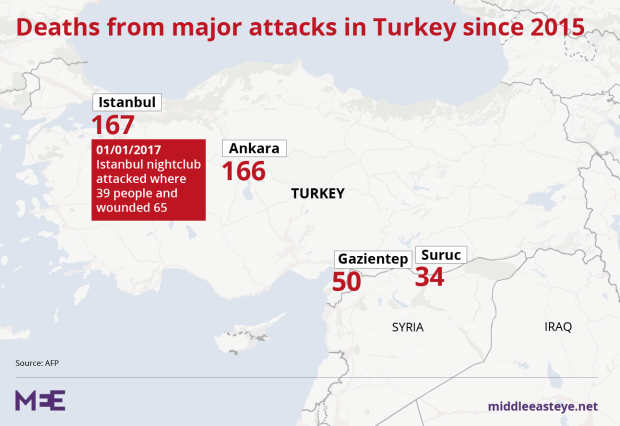 It is hard to blame the Turkish authorities for not taking enough precautions. Security measures are in place. Just like the rest of the world, Turkey has yet to come up with a solution to effectively tackle suicide missions undertaken in the name of ideology or belief.

One particularly bad habit I adopted during 2016 was to constantly check my phone for news updates given the spate of terror attacks and political turmoil in the country.

None of us expected what would happen a few hours later, but the wine and Raki - Turkey’s anise-flavoured spirit - weren’t flowing as freely in any event

For someone who rants at others for playing with their phones constantly, I had to sheepishly explain to the others that I needed to keep checking the news as I kept glancing at my phone during dinner.

I already knew that unprecedented levels of security measures were in place across Istanbul, with thousands of uniformed and plainclothes officers deployed. Trucks and lorries were banned from entering specific parts of the city, including where the Raina nightclub is located.

None of us expected what would happen a few hours later, but the wine and Raki - Turkey’s anise-flavoured spirit - weren’t flowing as freely in any event.

Longing for the good old days

As it often does at dinner parties, talk turned to the good old days. Recep bey, Betul’s father and a pious man, reminisced about New Year’s Eve nights during his youth, when the family would spend the evening playing Okey and place small bets to make it interesting.

Veysi chimed in, saying how, as a child, the entire family would wait for the traditional belly dancer to make her New Year’s television appearance, and how it was eagerly anticipated even by his conservative Anatolian family.

That Turkey appears to be a distant dream. Belly dancers don’t appear on TV anymore. Certainly not on state-run TV

Nevin, Betul’s mother who is also pious, jumped in saying how they used to be proper dancers back in the day and how she and her friends would go to watch various belly dancing artists perform at venues across the city.

That Turkey appears to be a distant dream. Belly dancers don’t appear on TV anymore. Certainly not on state-run TV.

Even these traditional New Year’s Eve celebrations at home and on the street are strongly attacked and condemned by a fringe group of extremists and their media organs.

They see New Year’s Eve and its celebration as neither Turkish nor Muslim, and those who engage in such events are no better than infidels in their eyes.

They splash headlines bordering on hate speech - but no official bothers to slam their remarks.

As the night progressed, Betul and Umran, my wife, were adamant that we watch a private broadcaster whose New Year’s Eve special was a concert by Tarkan, a heartthrob pop star.

Every time I make the mistake of thinking I have finally figured Turkey out, I am jolted back to reality by something mind-boggling. This time it was Tarkan, who was now singing traditional Turkish folk music.

My incredulity was met with a withering look from both Betul and Umran, who both said that he took to singing traditional tunes a few years ago.

Midnight came. Once we had ushered in 2017, I naively - or just through wishful thinking - stopped looking at my phone.

All talk of doom and gloom was put aside. Everyone wanted to stay hopeful during the first few hours of 2017

All talk of doom and gloom was put aside. Everyone wanted to stay hopeful during the first few hours of 2017.

Blissfully unaware of what had just happened a few kilometres away, we got ready to head home at around 2am.

Deniz, Betul and Veysi’s two-and-a-half year daughter, suddenly decided that she really liked us and started bawling that she was coming home with us. Suffering from a massive sugar rush thanks to all the sweets she had gobbled throughout the evening, her declaration of affection was merely a smoke screen, intended to prolong her new-found freedom of staying up late and being allowed to play on her mother’s phone.

We agreed that she come to us for 10 minutes and we then would then return her home. As we sat back in our own living room, being entertained by Deniz, I saw Umran’s face drop as she peeked at her laptop screen. “Here we go again, she said. “I think you better get in touch with your headquarters.”

It had only taken 90 minutes for terror to strike our home city again.

A short email just after the attack from David Hearst, Middle East Eye’s editor-in-chief, summed up what type of 2016 we had all been through.

“Hi Suraj,” it read. “Well they did not waste much time in making sure that 2017 was just like 2016 … gather you are doing story in the morning. happy new year David.”

That sense of despair, fear, even cowardice that takes hold in the first few minutes couldn’t be clearer than my initial remark to Umran. “Please call them to come pick up Deniz. I don’t want to be responsible for anything.” This responsibility extended to just taking her to the next building 20 metres away.

We handed over a carefree and happy Deniz to Betul at our door. The look of sorrow on Betul’s face, mixed with the love at seeing her baby - even if it was for just 10 minutes - drove home one point.

Whatever the cause of our worries these days, be it the direction Turkey is headed toward or mindless acts of terror, we are only left with one real choice.

We have to persevere.