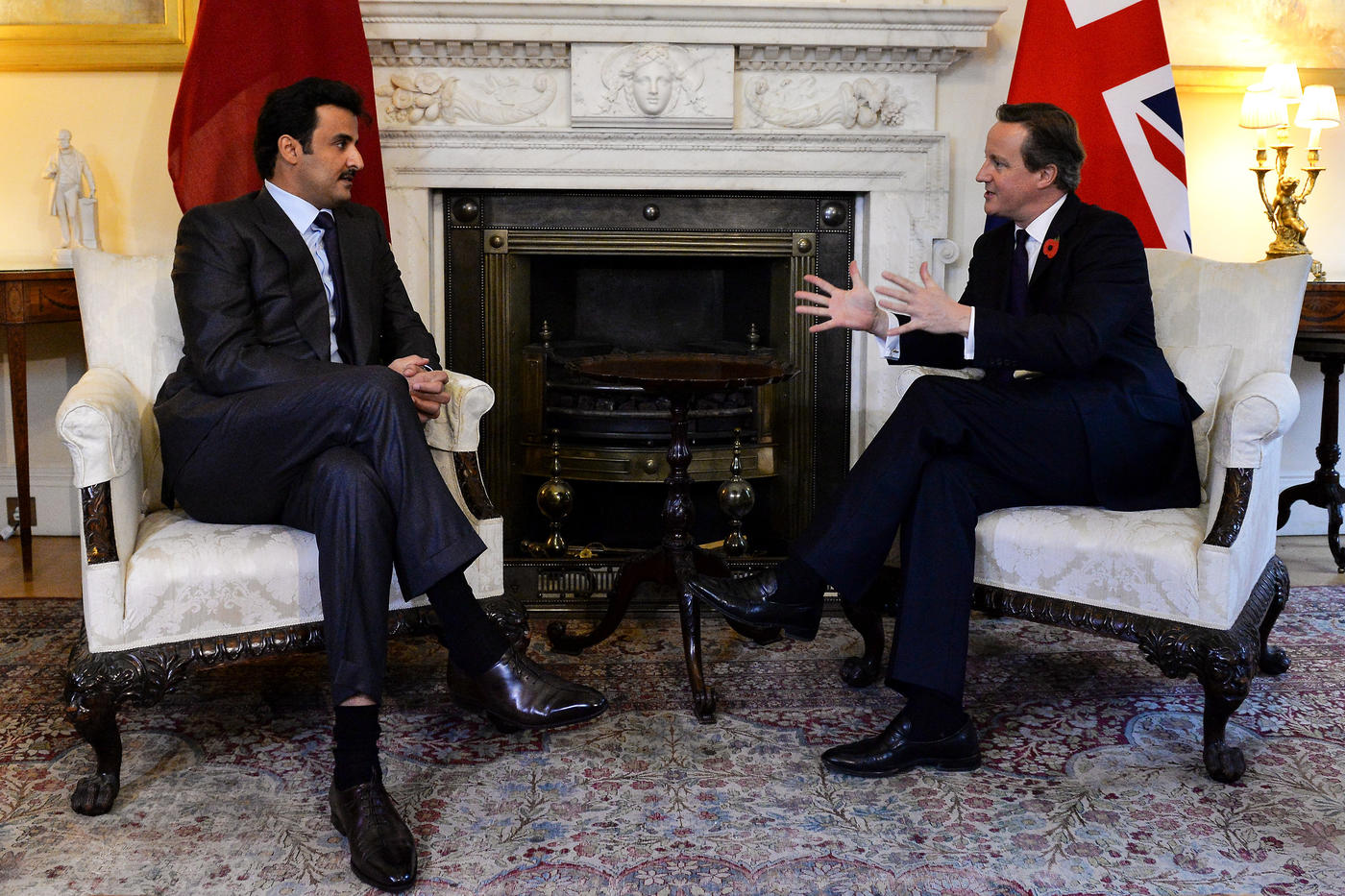 The Emir of Qatar arrived in the UK on Tuesday for his first state visit since taking over power, amid a whirlwind of accusations the Gulf State has been funding terrorist groups in the Middle East and North Africa.

Experts on the region have expressed “surprise” at The Daily Telegraph for having published some 20 articles in less than a month accusing Qatar of terrorist funding and described their coverage as potentially discrediting the newspaper.

While acknowledging Doha has questions to answer about its role in the region, they explained that behind the headlines, there lies a public relations (PR) battle between the UAE and Qatar, which shows little sign of abating as violence rages in many countries across the region.

On the day Emir Sheikh Tamim bin Hamad al-Thani touched down in London, the Guardian published a comment piece by Qatar’s prime minister rejecting allegations Doha has funded terror groups including the Islamic State (IS).

“The state of Qatar joins the UK in rejecting utterly the vision, the views and the methods of these abhorrent organisations. Their members purport to represent Islam, though they do nothing of the sort,” wrote Sheikh Abdullah bin Nasser bin Khalifa al-Thani.

His comments directly referenced the Telegraph’s “Stop the Funding of Terror” campaign – which has seen the UK daily tell shoppers at Harrods they are “buying into terror” due to Qatari ownership of the luxury department store.

Portland Communications, who reportedly won a lucrative contract in August to work on Qatar’s nation branding, confirmed to MEE on Wednesday the information underlying the Guardian article “was written by the prime minister’s office” but that the PR firm “may have provided guidance as to where it might be placed” in the UK media.

The Telegraph’s campaign has focused on allegations Qatar has funded groups linked with al-Qaeda in Syria, including Ahrar al-Sham, and pointed to Qatari national Abdul Rahman bin Umair al-Nuaimi who it alleges as being “one of the world’s most prolific terrorist financiers”.

Nuaimi, 60, is a former history professor at Qatar University and was labelled a “global terrorist” in 2013 by the US, who accuse him of numerous charges including that he oversaw the transfer of $2mn a month to al-Qaeda in Iraq.

Nuaimi has not been tried or convicted of any crime and his lawyers told MEE he denies all the accusations. We were told that a legal case is being prepared in his defence.

Analysts expressed little surprise Qatar had deployed a PR firm to gain prominent positive media coverage, recognising that it is important to communicate their message in the media and that they needed help to do so. Experts said the Telegraph’s campaign appeared to bear the hallmark of influence from a PR company with expertise in placing and promoting messages. Relations between the UAE and Qatar have dramatically soured over the past two years due to anger in Abu Dhabi over Doha’s perceived closeness with the Muslim Brotherhood.

“The politics behind the accusations seem very obvious – especially in light of the New York Times’ expose on leading think-tanks being manipulated in this Gulf cold war between Qatar and the Emirates,” said Christopher Davidson, reader in Middle East Politics at Durham University.

“Clearly the number of articles that have been published on this very narrow topic, which seem very thinly sourced, ultimately discredits the newspaper. What undermines the coverage is the effort to single out one of what is now apparently a number of states – including Kuwait and Saudi Arabia – accused of having played a role in the growth of IS,” he said.

The rise of IS in Syria and Iraq has led to much speculation about how the group is funded and US officials recently said Kuwait and Qatar remain “permissive jurisdictions” for terrorist financing.

“No one really knows but if money has gone to IS from the Gulf it is part of a region wide issue of wealthy private backers who have been operating without proper regulation or oversight,” said Davidson.

Suspicion has been raised that the UAE may have used PR companies in the UK to deal with its image after it was revealed by The Intercept that in the US, an Abu Dhabi-owned company had paid millions of dollars to brief journalists on allegations of Qatari terror financing.

In the UK, PR firm Quiller Consultants has listed the UAE Ministry of Foreign Affairs as one of their clients since registering in 2010 with the Association of Professional Political Consultants (APPC), a voluntary self-regulatory body for UK public affairs practitioners.

Quiller, founded by Conservative peer Lord Hill, also provide secretarial services to the UAE All Party Parliamentary Group in the UK, paid for by the UAE embassy in London.

On its website the company says their team of consultants have “many years of inside experience” within politics and the media allowing their clients “to make their case most effectively”. This is the very point of having a heavyweight PR firm retained - the recognition of the importance of image in the media.

When contacted by MEE Quiller Consultants said they “are not open to discussing their UAE work”.

Robert Mendick, the Sunday Telegraph’s chief reporter, did tell MEE he had not met with any PR representatives during his recent coverage of Qatar.

Experts on the UK PR industry, however, said a lack of transparency in British law means it is impossible to know whether a journalist has been briefed by a company acting on another country’s behalf.

“The US Foreign Agents Registration Act allows monitoring of how foreign powers try to manage the media and influence policy. In the UK we have nothing like that,” said David Miller, co-founder of Spinwatch and editor of Powerbase, a wiki that monitors power networks.

“UK lobbying agents can avoid declaring their clients if they want to – but even if they do name their customers then that’s all they do. In the US, they have to declare how much money they are paid and log copies of the work done to further the cause of another state,” he said.

Miller explained the negative impact a lack of transparency has had on UK media.

“Readers have no way of judging whether the news we are consuming has been placed by PR consultancies for foreign powers. That’s obviously damaging because it deceives, or potentially deceives, the news buying public about what’s happening in the world.”

While transparency is lacking in the UK, analysts said the UAE-driven media campaign against Qatar is well-known, with both sides said to have paid companies to criticise the other in a cold conflict that has been “brewing for two years.”

“The Emiratis perceived Qatar to be too close to the Muslim Brotherhood, causing trouble to the UAE by mobilising Sunni political Islamic opinion – something the Emiratis themselves couldn’t control,” said Michael Stephens, deputy director of the Royal United Services Institute (RUSI) Qatar.

“It’s my understanding a decision was taken at the top in the UAE to look at Qatar in a more critical light and paint them as the troublemakers of the region,” he said.

“The strategy was to present evidence to GCC partners and to use media establishments and Twitter in order to present a very negative case against Qatar – this ran into a number of fields: funding of terrorism, human rights issues, and the World Cup.”

Stephens also said that the apparent UAE-led media campaign criticising Qatar has been supplemented by an Israeli lobby angry at Doha’s support for the Gaza-based Hamas. There is no suggestion from Stephens that any media or PR firms mentioned in this article have been involved in the Telegraph campaign.

“Israel got in on this as well. After this year’s Gaza crisis, the Israelis took the decision that, because Qatar was supporting Hamas, something needed to be done – they were clearly involved in this media project against Qatar.”

However, beyond the perceived political motivations of negative Qatari media coverage, there remain serious questions for Doha to answer about its activities in the region and purported support given to certain “unpalatable” groups, according to Stephens.

“While many will acknowledge the Qataris have a right to feel aggrieved [about the coverage], there are many questions that they need to answer, questions which have concerned policymakers across the Western world and made people very angry in the Middle East.”

“In my travels in Iraq and Syria, there is almost – to a person – 100 percent belief that Qatar funds IS. There is a deep distrust of Qatar because of that.”

Stephens went on to say it is “nonsense” to suggest Qatar has funded IS but explained the route to repairing a damaged reputation begins with properly addressing allegations made in the media.

“Qatar needs to start getting specific about the charges levelled against them.”

Prior to the Qatari Emir’s visit, rumours had swirled that the negative media coverage could prompt an exodus of Qatari investments from London, the level of which Prime Minister Abdullah was keen to emphasise in the Guardian.

“Our interests, in companies as diverse as Barclays and Sainsbury’s, Heathrow airport, Harrods and Canary Wharf, total more than £23bn. These are not short-term investments. It is clear that both our countries benefit hugely from them. Our investment in the Shard, for example, should be seen as a vote of confidence in the extraordinary powerhouse of London,” he wrote in the article.

However, there is nothing to suggest Qatar will threaten to pull out of their investments in the UK and, if recent news is to be believed, the suggestion is Doha will be moving to buy more lucrative property in the capital.

The Financial Times reported on 27 October Qatar’s sovereign wealth fund has agreed to purchase London’s most expensive office space. The Qatar Investment Authority will reportedly pay more than £1.1bn for the Canary Wharf tower, which is currently the headquarters of the HSBC bank.

“Where there’s money to be made, ideology goes out of the window,” said RUSI’s Stephens.

Emir Sheikh Tamim met with David Cameron on Wednesday and a statement from the British prime minister’s office appeared to emphasise a desire to increase Qatari investment across the UK.

“The prime minister […] encouraged the Emir to consider more opportunities across the country,” including funding for a high speed rail line in northern parts of the UK, the statement said.

The issue of terrorist financing was also raised, although it appeared to have been a more than cordial discussion.

“The Prime Minister welcomed the recent legislation passed in Qatar to prevent terrorist funding and looked forward to the swift implementation of these new measures. They also agreed that both countries should do more to share information on groups of concern,” a spokesperson for the prime minister said.