VIDEO: 'We refuse to give in': Bedouin of Jabal al-Baba fight to stay on the mountain Suleiman Kayed Jahalin has been a resident of Jabal al-Baba since the 1970s (MEE/Sherel Khalel)
By
Sheren Khalel
, Abla Klaa
, - Elia Ghorbiah

JABAL AL-BABA, Occupied West Bank - The older residents of Jabal al-Baba clearly remember the view of rolling hills and green trees along the neighbouring mountains, before the illegal Israeli settlement of Maale Adumim was constructed.

“When I was little there were just mountain and trees on that mountain, like a jungle,” Suleiman Kayed Jahalin - a resident of the area since the 1970s and a member of the Jahalin tribe, one of the biggest Bedouin communities in the West Bank - told Middle East Eye, looking out at the now expansive urban settlement of nearly 40,000 Israeli residents that stretches across the land in front of him.

Maale Adumim, built on the eastern edge of occupied East Jerusalem, was founded in 1975. Suleiman was five years old at the time, but the settlement did not go up overnight, and he has a clear memory of the land before the settlement spread across the horizon.

The Palestinian families of Jabal al-Baba came to the mountain in the early 1950s, following the 1948 expulsion of Palestinians living in what is now Israel.

“We have been here for more than 50 years,” said Suleiman, who is partially blind due to a serious medical condition.

“We depend only on ourselves and our own resources, but now they have this huge settlement they want to make even bigger, so they want us to move and take what little we have left," he added.

Jabal al-Baba lies in the E1 corridor, a section inside the occupied West Bank that separates Maale Adumim from the rest of Jerusalem.

Approved in 1999, most of the nearly 3,000 acres of the E1 corridor was declared state land, under a “legally dubious procedure,” Israeli rights group B’Tselem stated in one of its reports.

If fully annexed, E1 would connect the illegal settlement of Maale Adumim with occupied East Jerusalem.

At least 18 Bedouin communities live in E1 and Jabal al-Baba alone is home to around 300 people.

Because the community is unrecognised, the people in Jabal al-Baba live without electricity and get water only from tanks filled by trucks.

“We are Bedouins, our tradition is to move from place to place, we didn’t ask for anything, we depended on our livestock and the land, but then Israel kicked us out from the Negev in 1948. We weren’t bothering anyone, we were living a quiet life,” Suleiman said.

“But that wasn’t good enough, now they want us to leave this land too,” he added.

Like so many other Bedouin communities, Israeli forces frequently come to Jabal al-Baba to either hand out demolition orders, or carry out demolitions in the community.

“We cannot expand our community, we cannot repair anything, we can't build new shelters for our children as they get older,” Suleiman said. “We are afraid of doing any new movements because they come and threaten us and tear down anything we do.”

Suleiman said that his community had to also deal with constant harassment and fear, as well as the demolition of their homes.

'[The children] wake up so scared, so afraid from the sounds of the soldiers, while they are destroying our houses and harassing us'

“They come at three and four in the morning on purpose, when everyone is sleeping. They come with trucks, jeeps and tanks and it really causes a deep fear in our children,” he said. “[The children] wake up so scared, so afraid from the sounds of the soldiers, while they are destroying our houses and harassing us.”

This year, Israeli forces have demolished an average of 26 Palestinian-owned structures every two weeks. In 2016, Israeli forces demolished or seized a record-breaking total of 1,093 Palestinian-owned structures throughout the West Bank, including East Jerusalem, according to the UN Office for the Coordination of Humanitarian Affairs (OCHA), the majority of which were located in Bedouin communities.

‘We Shall Stay Here’

Last week, youth and activists in the community got together and laid rocks painted white on a side of the mountain facing Maale Adumim that read in large Arabic script: “We Shall Stay Here.” Israeli forces came and destroyed the structure less than a few hours later.

Yusuf Salman Jahalin, a 42-year-old resident and community leader of the Bedouins of Jabal al-Baba, said he disagreed with the youth’s move because it brought unwanted attention to the community.

“Unfortunately we need to live here quietly, we don’t want anyone to bother us, and doing that provoked the Israelis,” Yusuf said. “They are always waiting on any detail to come to make problems for us.”

'[The soldeirs] come at three and four in the morning on purpose, when everyone is sleeping'

Yusuf has many stories of times in which his home was destroyed and he said every season has its struggles. Without a home, the freezing winter is nearly impossible to survive, and in the summer, the beating heat of the sun makes life unbearable without shelter.

“After they do demolitions, the Palestinian government or other organisations bring us tents sometimes, but then the Israelis come and take the tents away as well,” Yusuf explained. “It is a very difficult way to live.

Most of the homes in the Jabal al-Baba community are made of corrugated metal, with a few caravans donated by the European Union.

Yet even the EU caravans get demolished or confiscated depending on the mood of Israeli forces, Yusuf said.

While Yusuf knows his community’s time in Jabal al-Baba may be limited, he has some faith in the Israeli courts, where the community hopes to win the right to stay on the mountain.

“We have been officially told we are forbidden from building anything new, but we don’t have a date of when exactly they want us out of the area completely,” he said. “We are still waiting on the courts. The soldiers come all the time and threaten to tear down every structure and kick us all out, but we haven’t been given papers for that yet, we are still fighting it.”

'I watched this settlement grow like a cancer, taking over all the land'

In 2014, the community of Jabal al-Baba filed an appeal against the demolition orders, which would affect hundreds of Bedouin homes, including many belonging to the Jahalin Bedouin tribe.

Shlomo Lecker, the lawyer representing the community, told MEE that the proceedings were “ongoing” and “no new updates are to be expected in the near future” regarding the case.

Including those living in the E1 zone, there are a total of 46 communities, totalling around 7,000 Palestinians, in the central occupied West Bank alone who are at risk of forcible transfer by the Israeli government, 70 percent of whom are registered refugees, according to the Association for International Development Agencies (AIDA) .

In a Jerusalem Post op-ed published last month, David M Weinberg, director of public affairs at Bar-Ilan University's Begin-Sadat Center for Strategic Studies and senior advisor to the Tikvah Fund in Israel, said the annexation of E1 is “absolutely critical” for Israel’s future in Jerusalem, as well as its “long-term security”.

Because Israel’s environmental lobbies have successfully deterred most expansions of Jerusalem to the west, and the Palestinian cities of Bethlehem to the south and Ramallah to the north surround Jerusalem, expansion to the east is the only possibility, Weinberg explained.

“It is the last significant piece of unsettled land in the Jerusalem envelope,” Weinberg wrote. “It is the only place where tens of thousands of homes can be built in order to overcome Jerusalem’s serious housing shortage.”

'Imagine this is your home and someone tells you to leave it all, how do you think that feels? It’s humiliating'

East Jerusalem was “artificially separated” from the rest of the West Bank, according to B’Tselem.

“This separation will be intensified with the implementation of the E1 plan,” said the group’s report.

‘We refuse to give in’

When asked if he would move willingly if offered compensation to resettle, Yusuf gave a resounding no.

“Absolutely not, we will not move from here,” Yusuf said. “We were here seven or eight years before Maale Adumim. It hurts a lot. I watched this settlement grow like a cancer, taking over all the land.”

“But we refuse to give in. Imagine this is your home and someone tells you to leave it all, how do you think that feels? It’s humiliating,” he added. 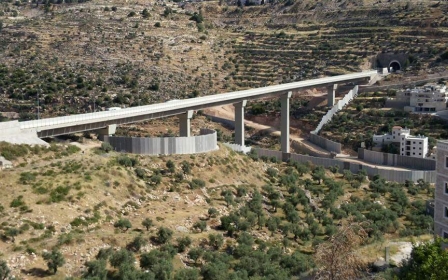 Occupation
So far, yet so near: Palestinians in Chile defend their homeland 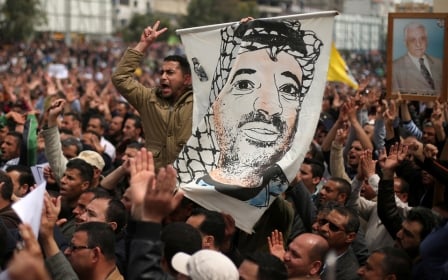