'It’s a lot different than in 2011. We feel that we have to vote to save the country,' a voter in Tunis told MEE. 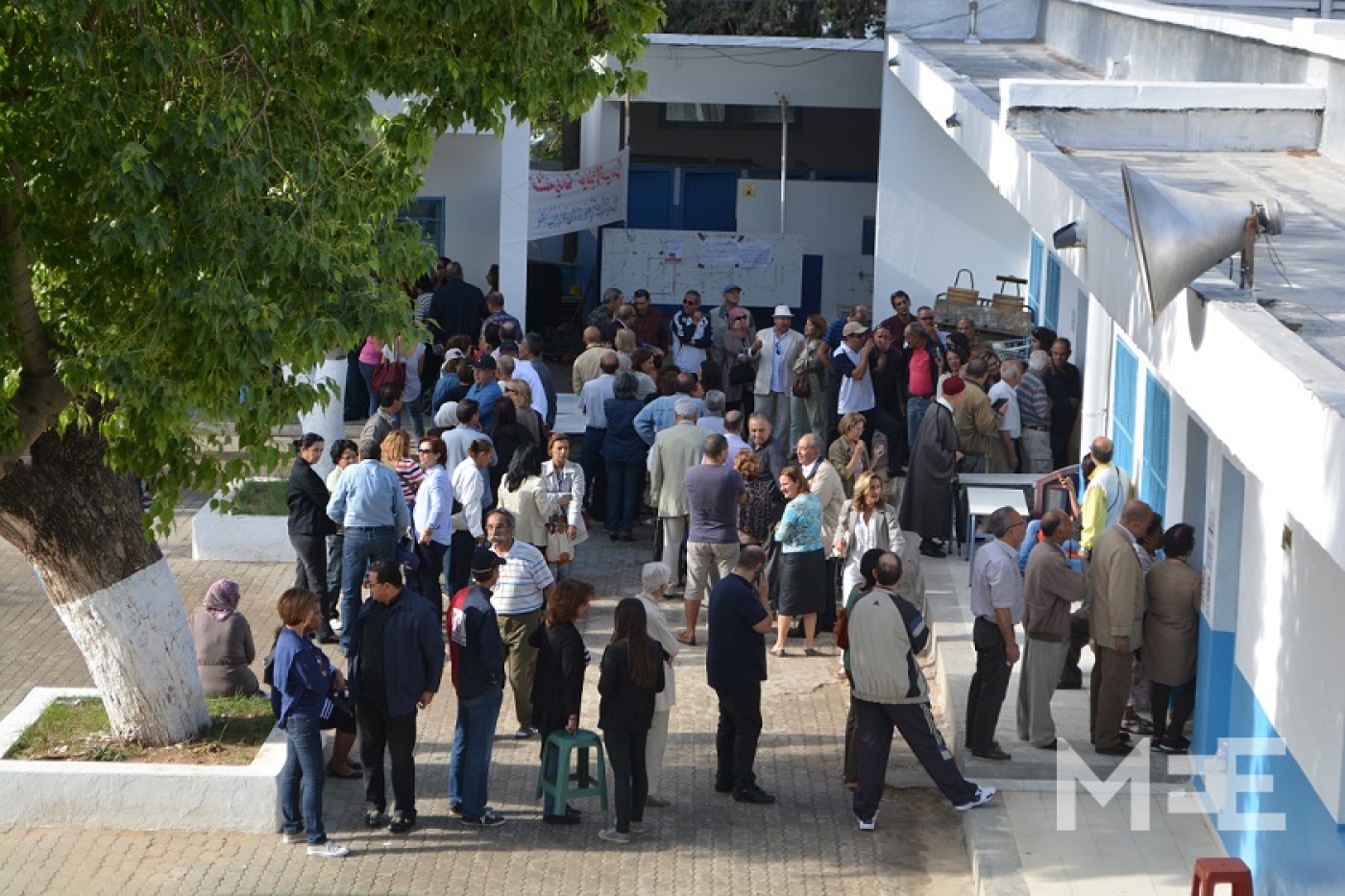 Voters in Tunis' poverty-stricken neighbourhood of Bahr al-Azraq were among an estimated 50 percent of eligible voters who turned out on Sunday (MEE/Emir Sfaxi)
By
Patrick O. Strickland

That revolution rippled throughout the Middle East and North Africa, and uprisings exploded against despotic regimes that had dominated the region for decades. Since that time, Libya, Syria and Egypt, among others, have devolved into violence.

In Tunisia, however, millions cast their ballots today in the second democratic elections in the country’s history. Their votes will determine a parliament that will sit for the next five years.

Pre-election violence struck the country on Thursday, when two National Guard officers were killed while exchanging gunfire with “terrorists” in Wadi al-Layl, an outlying suburb situated east of the Tunisian capital.

The following day, five women and one man were killed when security forces raided the home where gunmen had been holed up for more than twenty-four hours.

With tens of thousands of members of the security forces deployed at voting stations and elsewhere across the country, voting proceeded without major incident on Sunday and with what observers said appeared to be high turnout.

According to the Independent High Authority for Elections (French: ISIE), nationwide voter turnout hovered just above fifty percent as of 4:00 pm. The voting stations will close and counting will begin at 6:00 pm.

In Lac, an upscale district in the capital, hundreds lined up this morning outside a local elementary school to vote. Security was heavy, with police officers and soldiers lining the school grounds.

“There have been some minor infractions and complications,” said Ghassen Boukhari, a volunteer observer for I-Watch, a group that monitors the electoral process. “Some people registered here in Tunisia, but when they showed up at their assigned polling stations [couldn’t] find their names.”

“In some cases, people have tried to influence others to vote for certain parties, despite that being forbidden,” Boukhari, a 23-year-old medical student, told Middle East Eye as he observed a line of people pouring into the school. “However, this has been very limited.”

Many of them carrying Tunisian flags, a steady stream of men and women came and went. Young children followed waited in line aside their parents until arriving to the door, where they watched from afar as their mothers and fathers voted for legislators tasked with representing them for the next five years

Maryam, a mother who declined to give MEE her full name, said that she didn’t find her name registered upon arriving in Lac’s voting station. “I registered and was informed that I have to vote here, but my name isn’t present.”

“It’s very important that I vote,” she added. “I am very enthusiastic about participating and having a say in these [elections].”

Across town in Bahr al-Azraq, a poverty-stricken district of the capital, several voters expressed their optimism for Tunisia’s future.

Though the neighborhood has gained a reputation as a support base for Ennahda, the moderate Islamist party that won a plurality during the October 2011 elections, many residents told MEE that their promises have not been fulfilled in the past three years.

In 2011, Ennahda won 41 percent of the 217 seats in the parliament, and party leader Rachid Ghannouchi recently predicted a repeat of those numbers. Yet a recent poll by Pew Research reported “declining popularity for Ennahda” among 1,000 people polled in face-to-face interviews across the country.

Though Ennahda is expected to produce a strong showing, Pew found that “just 31 percent expressed a favorable view of the organisation, down from 65 percent in 2012”.

Habiba Nayef, a 40-year-old housewife, asked others on site for advice on how to vote. “Last time, I voted for Ennahda,” she said. “We didn’t see any improvements here [in Bahr al-Azraq] when Ennahda was in power. Nothing.”

“They promised us food and work, but we have neither,” Nayef added. “I’m used to poverty, but I want a better future for my daughters. I don’t know who to vote for… just not Ennahda.”

Nayef lingered. No one in the crowd would tell her who to vote for, an act forbidden by law. Unable to decide, she eventually left without casting a vote.

Mohamed Buraway, 51, who rode his bicycle to the voting station in Bahr al-Azraq, said creating jobs ought to be the next government’s first priority.

“We need work because we have none here,” he told MEE, lighting up a cigarette and shaking his head. “Life keeps getting more expensive, but work opportunities are harder to find [than before the revolution].”

“The next government needs to work together on behalf of citizens’ interests, not their own political interests,” he added. “The revolution was about the people, not about the parties and their differences.”

Umm Zeid, who declined to give her last name, agreed that tackling poverty and unemployment were the most important issues for her.

“People have gotten even poorer in this area since the revolution,” the mother of three reflected. Nonetheless, she added, “I’m optimistic now, to be honest. Even though it’s been hard, voting is the way to change the country.”

Others expressed the need for security.

Sumaya Tajouri, 43, held her small son’s hand as she recalled voting for Ennahda in 2011. Declining to say who she voted for on Sunday, she explained that “the most important concerns for Tunisia today are security and the economy”.

“People need to be able to live in dignity,” Tajouri said, “and there shouldn’t be any differentiation between citizens… no special treatment for some and neglect for others.”

Echoing Tajouri’s sentiments, Fatma Zaher said she “never believed there would be terrorism in Tunisia,” citing the declining security situation and recent attacks by armed groups against security forces in areas bordering Algeria.

“It is not part of our history here,” she said. “It’s shocking.”

Zaher added that she would not repeat her vote for Ettakatol, a left-leaning party, and instead supports Nidaa Tounes, the country’s largest secular party. “I want the situation to be more like it was under Habib Bourguiba and Ben Ali,” she told Middle East Eye, referring to Tunisia’s first two presidents.

“I miss those days, even though I supported the revolution,” she continued. “I can’t believe the people who were persecuted before [under Ben Ali] are now doing the same thing . . . that they are corrupt and getting rich.”

If the election does not produce a clear frontrunner, as many analysts have anticipated, the main two contenders, the secular Nidaa Tounes and the Islamist party Ennahda, will likely form a coalition government.

Souhayel Hedfi, vice president of Young Independent Democrats of Tunisia (JID-Tunisie), said his organisation was "very satisfied with the overall turnout in Tunisia".

“Coming out to vote is an obligation for good citizens,” Hedfi told MEE. “It’s great that voting is now understood as a duty. It’s a lot different than [the elections in] 2011. We feel that we have to vote to save the country.”