Where is Esraa? Egypt's authorities step up forced disappearances

In a pervasively repressive Egypt, dinner at Tex-Mex restaurant led to a young photographer vanishing without a trace 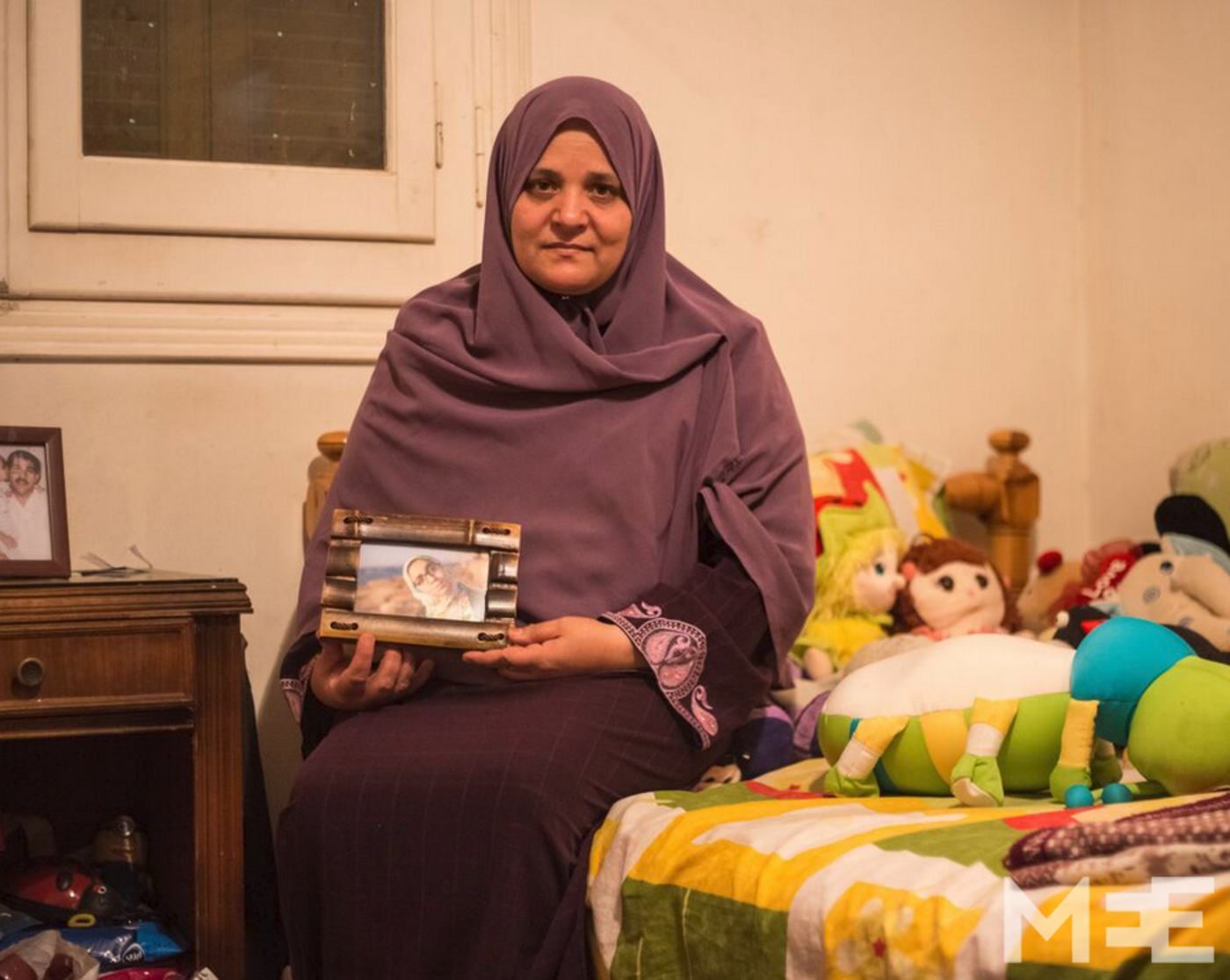 CAIRO - One summer evening Esraa al-Taweel, along with two of her friends, went to ride horses and dine at Chili’s, a Tex-Mex restaurant located on the Nile a few minutes from Tahrir Square.

Taweel seemed fine when she was last seen eating at the restaurant, but after that all communication between her and her two friends was cut off. On 1 June Esraa disappeared with no information about who did it, or why.

Her disappearance comes amid a spike in this new form of state repression in President Abdul Fattah al-Sisi’s pervasive crackdown on opposition activists. According to an article published in the Daily News Egypt in June, there have been at least 163 cases of forced disappearances since April. Taweel’s story is just one of them.

Taweel is a 23-year-old freelance photographer who, in 2014, was shot in the back while covering a protest held on the third anniversary of the 2011 Egyptian revolution. As a result of her injury, she has difficulty walking, because the bullet affected the nerves controlling her legs.

Her two younger sisters Allaa and Duaa along with their mother and father quickly sounded the alarm. By the following morning, all of Taweel's friends found out that she was missing, and started searching for her.

Her sister Duaa remembers how they went through the police stations in the area asking after Esraa.

“We would just go to beg at every police station. We would say that we don’t want to see her, we just want to know if she is here or not. All we wanted to know at the moment was 'Where is Esraa?’" she said.

“But we all had the suspicion that the police were involved and responsible for the disappearance of my sister, especially after we heard rumours about young men kidnapped by the police officers.”

Duaa also remembers the bad treatment she and her sister Allaa received in every police station.

“We had all these derogatory comments from the police officers. We would ask them if my sister was taken or not, and one of them would say that my sister is a whore and she probably went after a lover of hers,” she told Middle East Eye. “I was in no state to fight with them, and I would just silently swallow the insult.”

Allaa and Duaa next turned to Facebook and established a page called "Where is Esraa al-Taweel?" They posted regularly, telling people about their older sibling and also about her health status, which requires constant care and continued physiotherapy.

On 3 June they filed a report in the office of chief prosecutor Hisham Barakat (who was assassinated on 29 June) accusing the police forces of forcibly kidnapping Taweel and taking her to an unknown location.

Her father even managed to win assurances from an assistant to the minister of the interior who pledged live on air during a popular talk show that he would find out where she was being kept. But the assistant never called the father back, and he was ignored when he tried to call the presenter of the talk show again.

The family remained in this state of uncertainty for 15 days. “Personally, I reached the state that I believed my daughter was killed and dead already," her mother Hanaa Ali told MEE.

"If she did something and was caught for a reason, why aren’t they showing her and investigating her normally, like any other convicted person? Her father took a leave of absence from his job and stayed home all day making phone calls, and searching social media websites for any news about Esraa. We were in a miserable state.”

“I couldn’t keep up with my exams, and Allaa didn’t take any of hers, although it is very important for her, as she’s in the first year in the faculty of medicine.”

On 16 June, Zeinab Mohamed, a friend of the family, finally called Duaa. Apparently Zeinab was visiting a relative detained for political reasons at al-Kanater, a women's prison, and saw Taweel sitting beside a guard. Zeinab described to Duaa the clothes Taweel was wearing when she got a glimpse of her.

They were the same clothes she had been wearing 15 days earlier at the time of her disappearance. Duaa and Allaa hurriedly wrote on Facebook that their sister had been seen in the prison, and the news soon spread.

The next morning, Duaa and Allaa and their mother, accompanied by the family lawyer, went to the prison and asked about their sister. The prison guards refused to let them in, and getting any information seemed futile.

Then, by coincidence, they saw Taweel coming out of the prison surrounded by police officers. The two girls and the mother hurried towards her, but Taweel acted as if she didn’t know them; she asked them to go away.

"She seemed very pale and afraid, walking with difficulty," Allaa said. "We found out later that the officers investigating her threatened her that they would harm us. She was trying to protect us by acting as if she didn’t know us.”

When the family asked the police officers, they found out that she was on her way to sit before a prosecutor. The family followed in hope of talking to her. But Taweel's hearing was cancelled, and she was sent back to prison.

Later that night, the sisters went out to get things for Taweel, in hopes that they could see her the next day.

Their mother Hanaa Ali was alone at the apartment, when suddenly five police officers broke into the house.

“They broke down the door and got into the apartment," she said.

"I told them that what they did wasn’t an act of manhood at all, to break into a house knowing that only women are inside. But they didn’t care for my words and asked to get into Esraa’s room, before asking for Duaa. My heart fell from my chest; I thought they had come to take my second daughter.”

The officers assured her they only wanted Duaa to sign a document, and when the mother told them Duaa wasn’t at the house, they said they would wait for her, and sat there in the apartment.

Meanwhile, the two sisters realised something was going on when they saw police trucks in front of their flat. Allaa hurried up to the apartment while Duaa kept walking and tried to call the lawyer to tell him that the police were in their house. Allaa came into the apartment petrified.

“I felt helplessness for the first time in my life,” Hanaa Ali said as she started sobbing. “One of my daughters was in prison for no reason whatsoever, and the other was in my arms shaking and crying, and Duaa was in the street past midnight, and I couldn’t call her as was afraid they might take her if she comes [home]."

An hour later, Duaa came into the apartment with a lawyer. The police officers were still there, and in the presence of the lawyer, Duaa signed a paper saying that she would go to the prosecution office to answer some questions about her sister.

After signing the paper, the officers gathered all the laptops in the house, and wanted to take them. The mother and the lawyer refused, saying that unless the officers showed them a court or prosecution order, they could not take the laptops. One of the officers hit the lawyer when he attempted to prevent them from taking the laptops, Hanaa Ali recalled.

“I tried to beg him, telling him to let us delete our personal pictures from the laptop, but he totally refused that we even touch them or close our accounts on social media websites.”

The family spent a difficult night at home, and went the next morning to visit their eldest daughter. It was the first time they had spoken with her since she was taken. It was an emotional meeting. Taweel was asking them all kinds of questions about how they knew she was there. Were they okay? Had the police raided the house?

It was in this meeting that the family found out that the police had threatened Taweel that they would attack her family. Taweel told them that she had been held blindfolded for the first 14 days, and tied up in the State Security building in Lazoghly, before being moved to al-Kanater prison.

“Esraa told us that she had heard the voices of detainees being tortured in the cells beside her. She also thought for the first five days that they had captured her by mistake, and would release her any time," Allaa said.

"But after the first five days she lost hope, and one time when she was in the bathroom, she cut herself and wrote her name and phone number on the walls, so that maybe someone would come and memorise the phone number and call her family."

That same morning, the Ministry of Interior issued a statement saying that Taweel was detained according to due process, and that she was facing accusations of being affiliated with a "terrorist group," disturbing the public peace and security, and inciting public opinion against a sovereign entity. The statement included nothing about the fact that Taweel had been captured and held at an unknown location for about 15 days.

The family visited Taweel again on 22 June. This time they brought her more clothes, homemade food, and coloured pencils and sketchbooks because she likes to draw. During this visit, Taweel was calmer than the first time but she complained about the prison's facilities.

“My sister is detained with the common criminals, not political detainees. Women who are accused of robbery, obtaining drugs and prostitution. Staying with them hurts Esraa a lot. The smoke of the cigarettes they have all day is also hurting her lungs.”

Esraa’s physiotherapy treatment has stopped and her legs are hurting her a lot. She is starting to have trouble standing again, the family said.

One of the lawyers told MEE: “If we focus on the fact that Esraa was kidnapped, not arrested in a normal legal way, we would see clearly that the evidence against Esraa in the case is her laptop, a piece of evidence that was collected 17 days after her detention."

“This is of course illegal. If we stood in a court or sat in front of a prosecutor, I think we might have a good chance of getting her out,” the lawyer said, asking not to be named.

Taweel had a session in front of a prosecutor set for 30 June, but the hearing was postponed indefinitely due to the assassination of Barakat, Egypt’s chief prosecutor.

Meanwhile, Taweel is still languishing behind bars and according to her family her health will only continuing to deteriorate unless she received medical care soon.

The forced disappearance of Taweel is still an enigma for many. She was never a member of the Muslim Brotherhood, an organisation banned in Egypt. She comes from a family with no political affiliation and has not participated in any political protest for more than a year, due to her injury. But her family, like many more others out there, is wowing to keep on pushing for the truth, no matter how long it may take.