Why middle-class Egyptians are discovering the gift of thrift 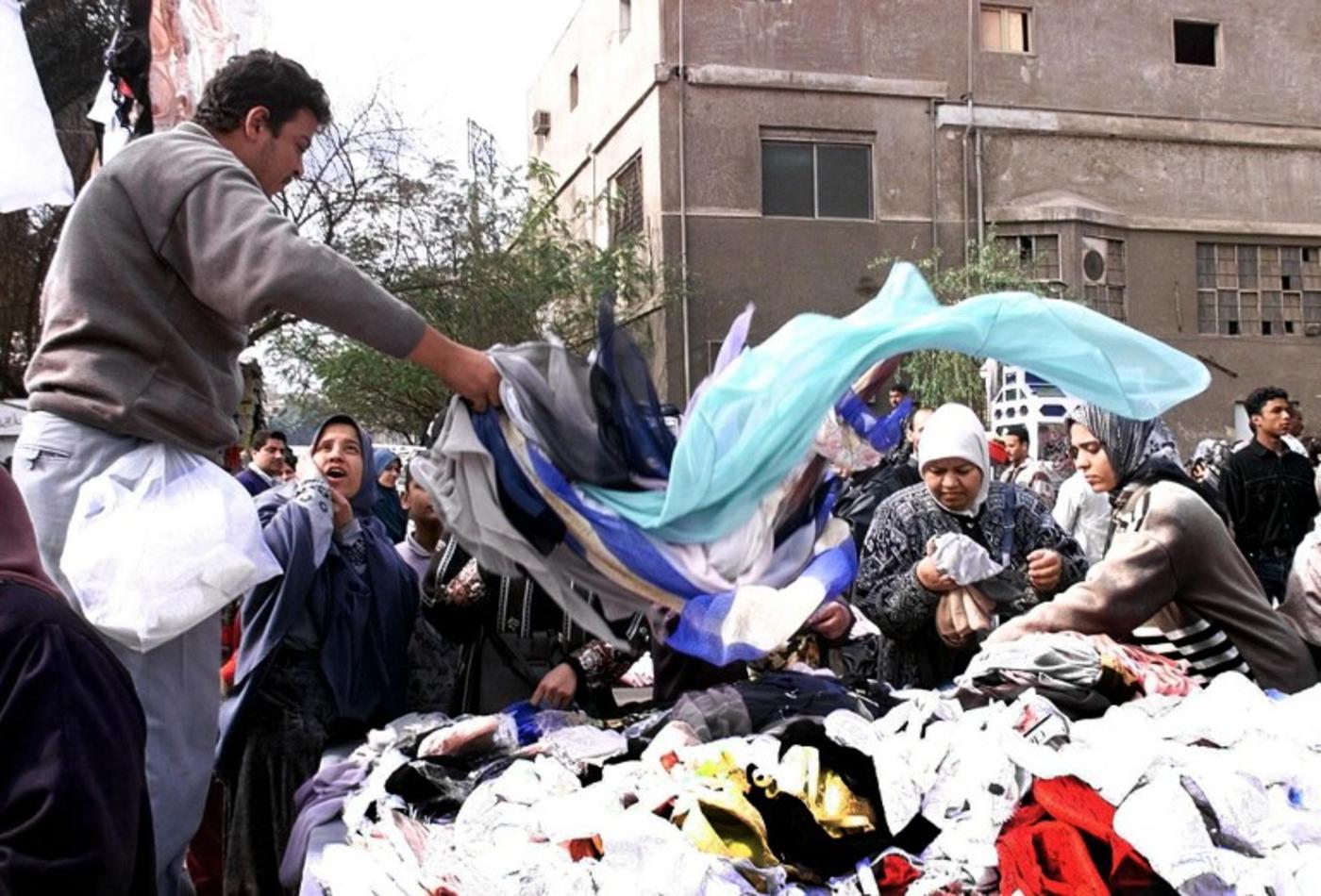 ALEXANDRIA, Egypt - In the absence of the bright Egyptian sun, the rain and clouds reign over the northern coastal city of Alexandria in Egypt. Heba, a 39-year-old accountant, attempts to hide her identity, wearing huge sunglasses, as she shops in Naga market for used clothes with her five-year-old son Nour.

While trying to find a black cap for Nour, Heba described how things have changed since the dramatic rise in the cost of basic commodities.

"I used to buy all my clothes and my sons’ from San Stefano Mall and downtown lavish shops,” Heba told Middle East Eye. “Now I cannot afford to buy new clothes. We can either eat and drink or buy new clothes - not both.”

Heba, who preferred to give her first name only, described herself as someone from the “upper middle class”. She explained that if any of her acquaintances spotted her buying in markets, designated for the “poor,” it would ruin her reputation.

"I do my best not to be recognised. I come very early or very late, and I wear sunglasses,” the divorced mother said, while looking around anxiously to make sure there were no familiar faces in the vicinity of the market.

It has been one year since the private sector accountant and mother of two decided to make the shift from shopping for new clothes in malls to purchasing used clothes in markets known as bala (literal translation, old clothes) in Egypt.

Since November Egyptians have been hit by a hike in prices when the government floated the Egyptian pound and slashed fuel subsidies as part of an economic reform package linked to a $12 billion International Monetary Fund loan.

Egypt's annual inflation rate soared to 23.3 percent in December 2016,  with prices of food, healthcare and transport all costing more, according to official figures revealed in January.

Jackets, pullovers, sweatshirts and shirts were put on display on long stalls in the open air or indoors inside small shops in Naga market.

Lucky shoppers found their proper sizes as they searched through piles of clothes. Heba’s objective was to find a nice heavy pullover for her son for a cost of LE100 ($5), a mission that has become increasingly difficult outside the confines of Naga market.

As she looked at a red cardigan before asking about its price, Heba explained how much she has saved through her new shopping strategy.

"I bought two jackets and shirts for them (her sons) and a pullover for me with LE600 ($32). Only one jacket in any mall would definitely cost me more than that,” she desperately said, pointing out that this was her third visit to the market this winter.

Heba was disappointed to find out that the nice red cardigan did not fit her tight budget. She could only afford another grey pullover for her younger son, Nour.

Previously, secondhand clothing markets such as these in Alexandria and Cairo were known to sell all kinds of clothes for very affordable prices. For years, low-income and working-class Egyptians depended on these markets for their clothing needs.

The used clothing trade flourished in the Mediterranean city of Port Said, which used to be a free trade zone in Egypt for years before it was cancelled in 2002 after an alleged assassination attempt against the ousted president Hosni Mubarak in 1999.

Essam Ibrahim, a 55-year-old shop owner, who took over the family business said that he feels that secondhand clothes are good value for money.

Ibrahim buys used clothes by the kilo then sells them per piece for a considerable profit.

“This [used to] make us very rich,” he said proudly, adding that now things have changed, as the price of used clothes is on the rise and there are limits to how much the customers can afford.

"We cannot raise our sale prices because our clients have limited budgets,” he said.

In the meantime, Amal, a 44-year-old nurse, was bargaining with one of the stallholders to buy a white pullover. Using all her powers of persuasion, she managed to convince the vendor to sell the item for half price.

The vendor, 50-year-old Mohamed al-Awny, accepted reluctantly. Though he wanted to make more of a profit off his sales, he understands that his clientele cannot afford to pay more.

“These are clothes for the poor and they cannot afford to buy them,” Awny said. “The poor are now [even] poorer.”

As Awny leaned on the stalls for women's clothes, with a grey scarf draped around his neck and a heavy dark jacket keeping him warm, he said:

“We are now witnessing a shift, as middle-class families come in their cars and buy from us. What a pity for them," he said.

Awny himself has been hit by the economic difficulties, as he cannot afford the steep costs of marriage and has therefore remained single.

Even though Amal got her asking price, the agreed 30 ($1.6) Egyptian pounds, she was still disgruntled, because she could not afford to buy everything she needed.

"I planned to buy two or three pieces, but I only bought one. The prices here are also getting expensive,” she said.

The long white pullover she purchased would have cost at least 300 Egyptian pounds ($16) had it been bought new at the shops across the road.

Awny recalls one of his working-class clients who came to his shop earlier in the morning, asking to sell three pullovers he had bought last year.

In Cairo, many Egyptians are changing their buying behaviour as well and switching to used clothes shops.

In Wekalat al-balah market in central Cairo, Mohamed Abdel Rahman runs a small shop that sells secondhand clothes. He said he was receiving “a new kind of client” at the famous downtown Cairo market.

“We now see people who seem to belong to the middle class, they already wear better clothes,” Abdel Rahman said, as a couple selected a leather jacket just behind him.

Frustration was apparent among other shoppers as they checked the stalls and left desperately without purchasing anything.

Many buyers just looked around, after trying to bargain for lower prices on specific items, before leaving empty-handed.

As the prices of basic commodities climb, economic analyst Mahmoud Negm told MEE that it is expected that people would resort more to buying secondhand clothes, referring to the peak of sales at OLX online shopping website in selling different secondhand products.

He added that some Egyptians did not just decide to cut their purchases of clothes, but cancelled it completely.

There has definitely been a shift in consumer thinking. Internet ads now promote the idea of trading in used clothes, by attracting small investors with huge profits in a growing market.

The head of the fabrics and textiles division in the Chamber of Commerce in Alexandria, Salah El Masry, said that the industry of used clothes is “booming” now due to the high prices of new clothes.

This growing market of selling used items inspired Nili Zaher who works for a prominent accountant firm to create a group on Facebook called “Women against rising prices”.

Zaher said that her idea aims to challenge the skyrocketing prices of new winter clothes.

“We are trying to give [people] an alternative. In the last few months, used clothes have become a trend,” she said.

The group started with selling used clothes only, but now they are looking to sell other used products like books and furniture, which are in good condition.

The group attracted 924 members which buy and sell products that are sold for a maximum of 75 percent of the product’s initial price. This is considered a good solution for many Egyptians who can no longer afford new clothes.

“My salary barely covers food, beverage, house rent and electricity bills, new clothes are no longer an option,” said Mona Abdel Rahman, a mother and government employee, adding that she already had a mountain of unpaid bills.