LATEST: Four killed as Israel cracks down on Gaza's 'March of a Million'

Live
LATEST: Four killed as Israel cracks down on Gaza's 'March of a Million' 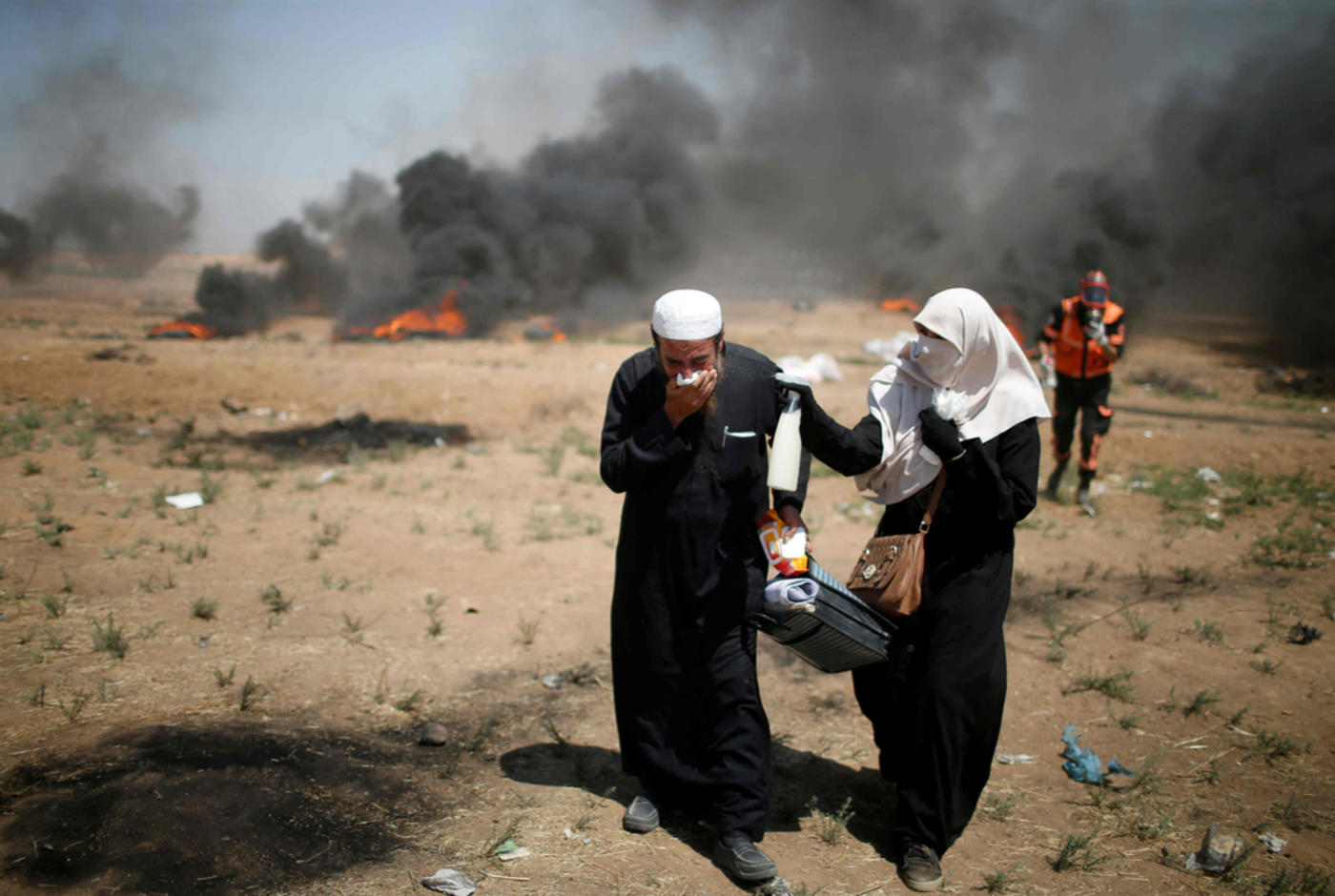 Palestinians are expected to show up en masse on Friday for the "March of a Million for Jerusalem", marking both International Jerusalem Day and the 51st anniversary of the 1967 Middle East war.

Israeli forces have been on high alert since Thursday, with snipers and tanks stationed along the fence, raising fears that the rallies could be violently repressed once again.

We'll be keeping you updated here throughout the day.

Warning: Some of the images shared on this live blog depict sensitive and graphic scenes.

The three dead were identified as:

Among the wounded are 48 minors, two medics, and five journalists. At least 117 demonstrators were injured after being hit with live bullets, the ministry added.

If you are a bit overwhelmed by the news coming out of Gaza for the past few months, this Middle East Eye explainer of the history, political geography, living conditions under the blockade, and the impact of several wars on the small Palestinian territory

'The world sleeps as Gaza dies'
4 years ago

Demonstrators spoke to MEE today about their motivations for coming out to protest despite the dangers after 10 long weeks.

“Jerusalem is the Palestinian capital, not the Israeli or American one,” he added, rebuking the move of the US embassy to Israel to Jerusalem last month, on the bloodiest day of the Great March of Return.

Many expressed frustration at the international community's perceived indifference to their plight in the coastal enclave, which has been under a stringent Israeli-led and Egypt-enforced blockade since 2007.

"We don’t have electricity or water or salaries," a female demonstrator said. "The world is in a deep sleep while the people of Gaza are dying."

Protester Saleh Nasser Abu Ras directed his ire squarely at Arab nations, accusing them of standing by idly while offering only words of condemnation.

“I want to send a message to the Arab world: Enough is enough. People and children are dying because we are defending our land,” he exclaimed. “We have small children here who are braver than the Arab governments.”

The ministry has also reported at least 525 injuries today, including 26 minors and 92 wounded by live fire.

BREAKING: One Palestinian killed in Gaza
4 years ago

The Gaza health ministry has just reported that a Palestinian, identified as Ziad Jadallah al-Barim, was killed east of Khan Younis in the southern Gaza Strip.

He is the first person to have died during Friday's protests, although at least 525 Palestinians have been wounded, the ministry added.

Read more: The Palestinian who sparked the Great March of Return
4 years ago

Middle East Eye has interviewed Palestinian political activist Ahmed Abu Artema, who launched the Great March of Return about the goals and implications of the protest movement.

"The March of Return concept is not a traditional way of protesting. It is not an armed struggle or a silent and passive calmness which led to more sanctions by Israel and the Palestinian Authority in Ramallah. The concept was that we could protest and demonstrate without going to war," Abu Artema explains to MEE's Mustafa Abu Sneineh.

A great primer for those who have questions on the origins of the movement that has taken over Gaza in the past two-and-a-half months.

The Gaza health ministry's latest update estimates that at least 386 Palestinians have been wounded so far today in the protests.

The statement added that five people were in critical condition.

Sabreen al-Najjar, the mother of slain Palestinian medic Razan al-Najjar, decided to follow in her daughter's footsteps and don a vest from the Palestinian Medical Relief Society on Friday, the Gaza health ministry reported.

Razan was killed by a live bullet in the chest last Friday as she served as a volunteer medic on the frontlines of the demonstrations, sparking outrage at the Israeli army's targeting of medical staff. An initial internal Israeli investigation dismissed her death as unintentional, but a social media campaign by Israeli officials seeking to link Razan to Hamas was met with anger and accusations of smearing the young woman in an attempt to retroactively justify her killing.

"My daughter was a brave paramedic who was never scared of the Israeli snipers," Sabreen told MEE last week.

More than 250,000 people are reported to be attending Friday's Gay Pride Parade and beach party in Tel Aviv, just 70 kilometres north of Gaza.

Israel's Haaretz newspaper said that "ripped men in white underwear, pink bunny ears and black bow ties" were "gyrating through the streets" of the city, which neighbours the historic Palestinian port of Jaffa from where many refugees fled in 1948 to Gaza, where they and their families have remained trapped ever since.

Limor, a young Israeli participant in the parade, told MEE: "Today is a day of connection, I feel a connection with everybody, I feel free, without obstacles or borders."

Asked whether they saw a difference between the rights they were fighting for in Tel Aviv, and the rights of Palestinians in Gaza she said: "In Israel and Gaza, people suffer and this is because of a problem in leadership. We are all human beings, and we don’t suffer less than the people in Gaza... The people in Gaza misuse the resources we send them."

Critics accuse Israel of promoting the event as part of a "pinkwashing" campaign to promote a liberal image of the country and conceal human rights abuses suffered by Palestinians.

Israeli gay rights activists also pointed out on Friday that same-sex marriage is still banned in the country, and that bills to improve LGBTQ rights had repeatedly stalled in the Knesset.

With Tel Aviv's annual LGBTQ carnival underway, some reminders:
There is no same-sex marriage in Israel
Religious Zionist rabbis regularly incite against the queer community
Bills to improve LGBTQ rights continually fail to pass
Gay "conversion therapy" is still a thing in Israel

The +972 website reported that hundreds of LGBTQ activists blocked the route of the parade for a while to protest against the Israeli government's "cynical exploitation of the LGBTQ struggle".

A flyer that the activists tried to distribute to participants in the parade said: "We don’t want to bring down the mood, we swear. We are queers who want to celebrate our amazing identities and struggle for our rights together. But not at the expense of the rights of others.

"The Israel government is exploiting us to appear liberal and progressive, while violating the rights of Palestinians on a regular basis — this is called pinkwashing."

Read more on drones over Gaza
4 years ago

Since the beginning of the Great March of Return on 30 March, the Israeli army has fully incorporated tear gas-dropping drones into its arsenal against protesters in Gaza.

MEE's own Daniel Hilton took a look at Israel's new use of this technology last month, and how the increased range of the devices brings about heightened danger for targeted Palestinians.

Drones over Gaza: How Israel tested its latest technology on protesters

News agency Reuters has published some incredibly disturbing images of a Palestinian protester who was struck in the face by a tear gas canister. Less than two hours since the official beginning of Friday's protest, the Gaza Health Ministry reported that more than 100 Palestinians had been treated for wounds or due to excessive tear gas inhalation, with at least one person in critical condition.

The ministry also stated that two journalists were injured: AFP photographer Mohammed al-Baba was shot in the right foot with a live bullet, while an unidentified Al-Aqsa TV cameraman was hit in the back by a tear gas canister. Both were reported to be in moderate condition.

A Palestinian Red Crescent ambulance was damaged after being hit with tear gas by the Israeli army east of Khan Younis, the Gaza health ministry reported. According to ministry spokesman Ashraf al-Qidra, a tear gas canister broke the front windshield of the ambulance.

The ministry has regularly accused Israeli forces of deliberately targeting medical professionals during the protests. Two paramedics have been killed by the army since 30 March - most recently 21-year-old volunteer medic Razan al-Najjar who was shot in the chest last Friday, sparking outrage.

Hundreds of thousands of Palestinians are out demonstrating in Gaza only an hour since the official beginning of today's demonstration.

As in previous demonstrations in the Great March of Return, protesters have been setting tyres ablaze to block Israeli snipers' lines of vision.